Census information is listed on TheGenealogist for England, Wales and Scotland.

The census records are a great starting point for your research. They allow you to discover where and how your ancestors lived at various points in time, what profession they worked in and how many people lived with them at that time. Census records give you a great snapshot of your family every ten years.

TheGenealogist offers access to a full collection of transcripts from 1841 to 1911 for England and Wales and 1841 to 1901 for Scotland. Search by name, address, age, occupation our use our ‘Family Forename Search’ to find your matches without entering a surname.

Alan Alexander Milne was the famous English author known for his ‘Winnie-the-Pooh’ books and for various children’s poems. Here we search the census records on TheGenealogist and find a copy of the 1911 census document complete with a transcribed record. We find A.A. Milne is a young journalist living with his parents near Haverhill. His father John, is a retired church master. 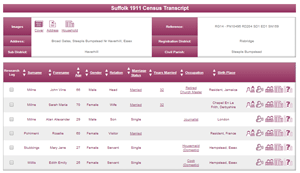 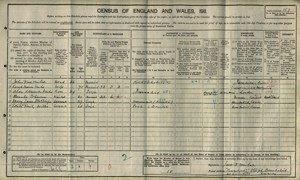 What is the Census?

The census is a statistical exercise undertaken to inform the government, counting and recording facts about the population. You could say that the first large scale census taken in modern history was Domesday and there have been others over the years, such as Muster rolls, taken to see what able-bodied men and weapons were available for war.

A census has been carried out every decade since 1841 (with less comprehensive census taking starting in 1801). The only exception when a census was not taken was in 1941 during the Second World War. Census records were never intended for family historians to use, but as a an exercise in finding out statistics about the population, to enable the government to make accurate and informed decisions on a wide variety of social topics including housing, transport and food, and to identify the strengths and weaknesses in the economy of the country at that point in time. However, there value nowadays as a snapshot in time is now widely recognised as immense for family historians.

What can we find out?

From 1801-1831, purely statistical data was collected with no usable genealogical material, however the 1841 census introduced records with some personal information for the first time. The usefulness of the 1841 census is limited to family historians because it unfortunately didn't accurately record people's ages, or where they were born, only noting if they were born in the same county or not.

Address
Unfortunately not always very accurate, unless your ancestors lived in a named house or farm. You may have to settle for simply knowing the name of the road or the village.
Name
The surname with at least one forename, although it could turn out to be a pet name, and sometimes you find second forenames or initials.
Relationship
How the individual is related to the head of the household. Information providing the structure of the family, especially where married children or relations are included in the household.
Condition
Whether married, widowed or single. Again useful in establishing family structure.
Age
From 1851 onwards, these are usually as accurate as your ancestors were able or prepared to supply. In the 1841 census they are usually rounded to the nearest 5 years for adults.
Occupation
The rank, profession or occupation can be useful in helping to establish that you have found the correct person, especially if they share a relatively common name.
Where born
Another field that is useful in helping you identify individuals, although for a number of reasons it frequently contains mistakes.

In addition to the above, the 1911 Census was the first to include the number of years a couple had been married and how many children had been born to that marriage.