This UK Census collection gives details on the records of all those enumerated in the 1861 Census of England and Wales. The United Kingdom Census of 1861 recorded the people residing in every household on the night of 7 April 1861, and was the third of the UK censuses to include details of household members. The 1861 format of the census was identical to the previous 1851 census, despite pressures for 'religious affiliation' questions to be included.

TheGenealogist provides fully transcribed records and links to the actual images of the 1861 Census, reproduced by courtesy of The National Archives, London, England.

Information in the 1861 Census records:

Florence Nightingale, born in 1820 was a celebrated British social reformer and statistician, and one of the founders of modern nursing. She came to prominence while serving as a nurse during the Crimean War, where she tended to wounded soldiers. She was known as "The Lady with the Lamp" after her habit of making rounds at night. On the 1861 Census, we find Florence Nightingale living in lodgings with a couple of servants in Westminster, London. 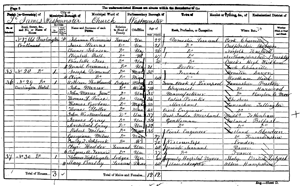