The 1851 Census for England and Wales was taken on the night of 30 March 1851. The amount of information collected was extended in this 1851 census and from 1851 to 1901 there are only minor changes to the information recorded on the census form.

For the first time in a census, each householder was required to complete a census schedule giving the address of the household, the names, ages, sex, occupations and places of birth of each individual residing in his or her accommodation.

In the 1851 Census, householders were asked to give more precise details of the places of birth of each resident, to state their relationship to him or her, marital status and the nature of any disabilities from which they may have suffered.

The enumerator then collected the census schedules and these were copied into census enumerators' books. The way these are grouped may mean that a road is split over several folios with other streets in between. In this case the street indexes should list a series of folio references.

To summarise, The 1851 Census can provide us with the following information for use in our family history research:

Charlotte Bronte was born in 1816, in Thornton, West Riding of Yorkshire, the third of six children. She became a famous novelist and poet, writing the classic, Jane Eyre. Two of her other sisters, Emily and Anne, also produced classics of English Literature. Charlotte is the only sister to appear on the Yorkshire 1851 Census, living back at the family home in Haworth with her father, Patrick Bronte. 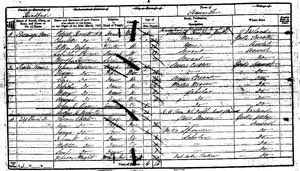