This UK Census collection gives details on the records of all those enumerated in the 1911 Census of England and Wales. The United Kingdom Census of 1911 recorded the people residing in every household on the night of Sunday 2 April 1911, and was the eighth of the UK censuses to include details of household members. The Census of England, Wales, Scotland, Channel Islands and the Isle of Man collected detailed information on each individual who spent the night in an individual household.

1911 Census was the first UK Census where the census return was written by the ‘Head of the Household’ and the document was used as the primary census return.

Information in the 1911 Census records:

Additional information included in the 1911 Census:

All forms were meant to accurately reflect each individual's status as of 2 April 1911 & the household they spent the night in. People who were travelling or living abroad were recorded at the location or place where they spent the night. All of the details from the individual forms were later sorted and copied into The Census books, which are the original records you can view images of today.

Emily Wilding Davidson was an activist for campaigned vigorously for women’s suffrage in Britain in the year’s before the First World War. She was jailed on nine occasions. She is best known for stepping out in front of King George V’s horse ‘Anmer’ at the Epsom Derby on 4 June 1913, sustaining injuries that resulted in her death four days later. Both Emily Davidson and her fellow campaigner, Dorothy Bowker made protests in the 1911 census. Emily hid away in the Houses of Parliament, so she could give her address as the centre point of British politics and Dorothy Bowker used her form to show her feelings on the lack of voting rights for women. 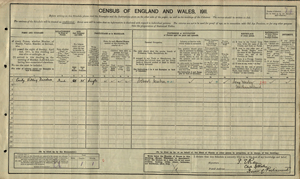