Matt Lucas - Who Do You Think You Are?

Not much of Little Britain

Above: Matt Lucas explores his Jewish roots in Who Do You Think You Are? Credit: BBC/Wall to Wall Media Ltd/Stephen Perry

Matt Lucas is well known to TV viewers thanks to a diversity of roles, reflecting his talents as a character actor and comedian, as well as being an entertaining co-presenter of the Channel 4 incarnation of the Great British Bake Off. He has made notable appearances in Doctor Who and Paddington, although perhaps he is most famous for a multiplicity of personas in Little Britain. Ironically given that show's name, he mentions early in his episode of Who Do You Think You Are? that he was recently granted dual nationality, as a citizen of Germany as well as the UK.

And of course thereby hangs a tale, of German Jewish roots on his mother's side. Matt explains 'My mum is a typical Jewish mother', and he speaks fondly of his 'formidable' German grandmother Margot, who fled to Britain at the start of the Second World War. The TV show focuses very much on Germany and the sobering fate many of Margot's relatives faced as Jews in the 1930s and 1940s – as well as discovering a close connection to a famous name in the Netherlands. But in fact all four of Matt Lucas's grandparents were Jewish, and here we will use online resources to explore some of the British-based lives of the three not featured in WDYTYA.

Margot's husband Maurice (sometimes also spelled Morris) is only mentioned fleetingly in the show, but it's the work of seconds with TheGenealogist's Master Search to find a marriage index record for Margot Hillel and Maurice Williams in Hendon in 1944; a death index search then reveals that Maurice died in 1976 and was born around 1905. Also, from ordering the 1968 GRO marriage certificate for Matt's parents, John Stanley Lucas and Diana Florence Rose Williams, we learn that Maurice worked as a journalist.

These snippets of information enable us to push back further into the family tree. A search of the 1939 Register at TheGenealogist helps us to track down Maurice earlier in life – here we glean his date of birth (19/08/05), confirm his occupation as journalist and find other members of his family. 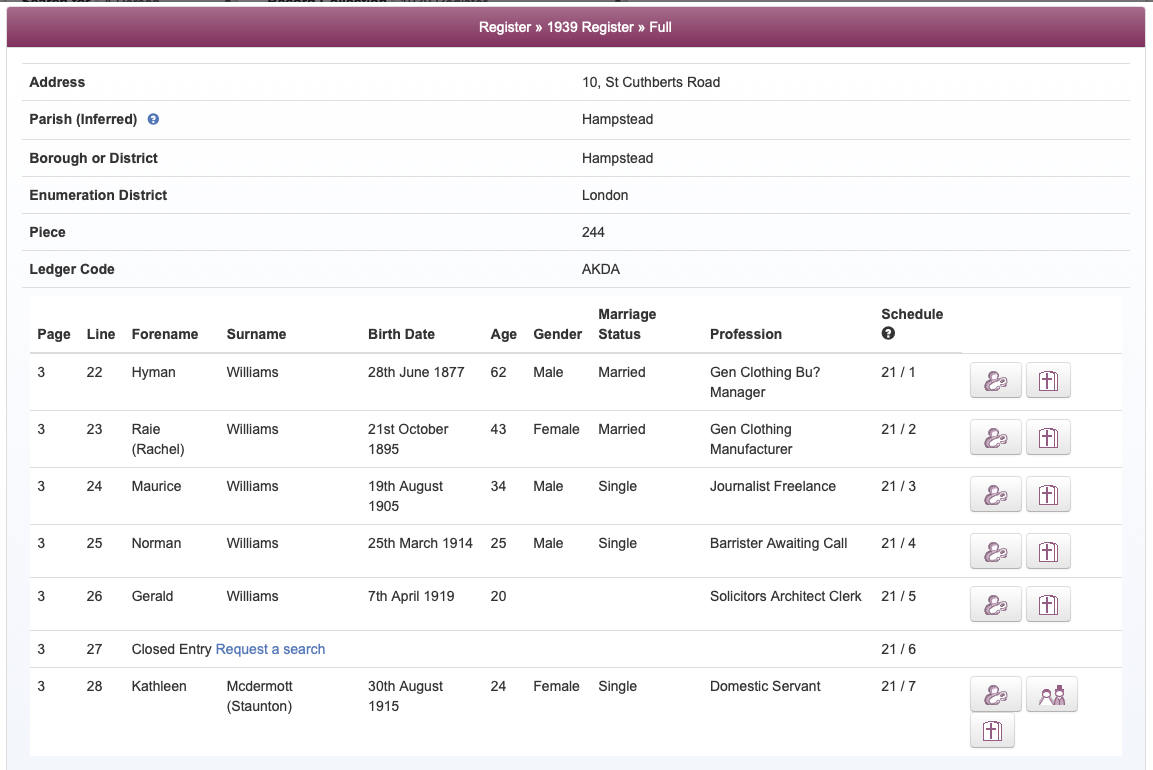 Among those other family members is his father, listed as Hyman Williams, born on 28/6/1877, working in the rag trade. His death index confirms that year, as well as telling us he died in 1952. Trade directories from 1908 and 1910 at TheGenealogist list a Hyman Williams working as a 'fancy draper' in Tottenham Court Road – and interestingly the latter has the name as 'Hyman Pilpel Williams' – later directories from the 1930s show a 'Hyman P. Williams' now based in Finsbury Park. This addition of 'Pilpel', with the help of some detective work, reveals more pieces of the genealogical puzzle. A 1910 trade directory at TheGenealogist provides an interesting name clue

TheGenealogist is particularly useful for researching Jewish roots in Britain in the early 20th century thanks to a collection of issues of the Jewish Chronicle from 1905 to 1908, and the Miscellaneous Records dataset includes a database of Jewish Synagogue Seatholders from 18 synagogues across London between 1920 and 1939.

Searching for 'Pilpel' reveals a very interesting record from the 25 August 1905 edition of the Jewish Chronicle – note that this was less than a week after the birth of 'Maurice Williams'. 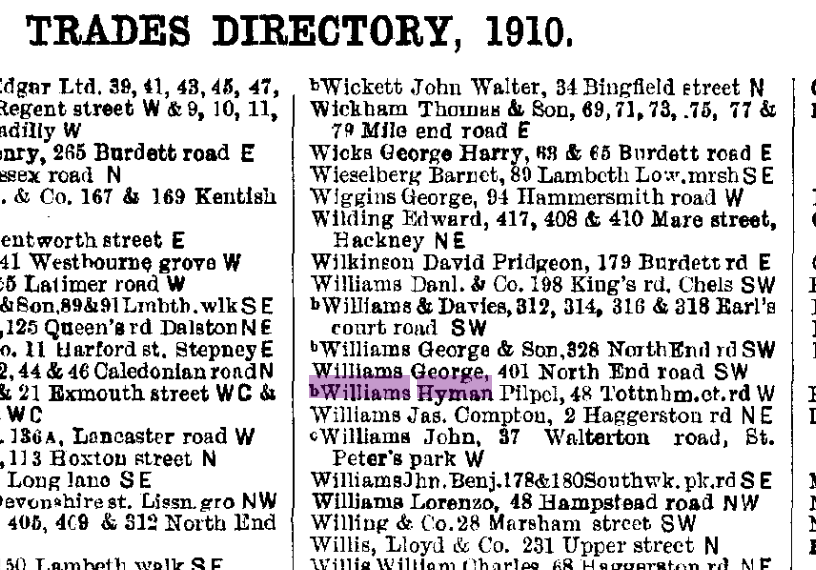 There we read a birth notice: 'On the 19th of August, at 11, Berwick-street… Flora, the wife of H. William Pilpel (née Krakower), of a son…' But how do we square this with a 1911 census record, also at TheGenealogist, listing 'Pilpel H. Williams', aged 32, a drapery dealer – and living in Tottenham Court Road. With him are 'Flora Williams', 29, and five-year-old Maurice Williams. The parents were both born in Austria. 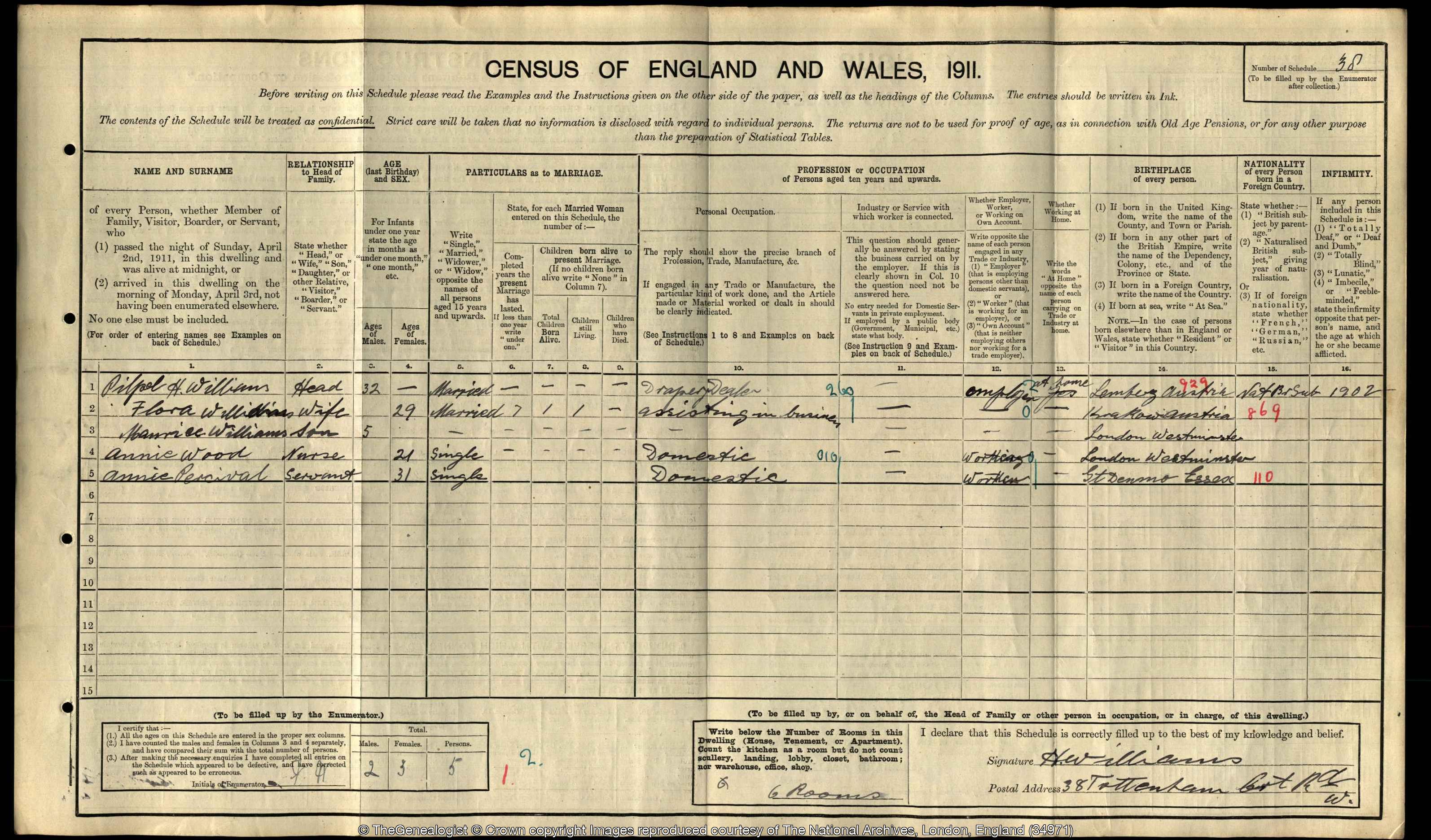 Another piece of the name puzzle, in the 1911 Census

If we dig around in the 1901 census too, there we find a 23-year-old 'drapery traveller' called William Pilpel, born in Austria; his father Leon Pilpel was also born there and in the same trade, and they are living in 17 Newcastle Street, Whitechapel. In the same year, if we search for Flora Krakower at TheGenealogist, there she is, living in Berwick Street, i.e. where Maurice was born four years later. She is with her parents John and Helen, all born in Austria too – and John was a draper. Kelly's trade directories for 1908 and 1911 list John Krakower as a fancy draper, again in Berwick Street. 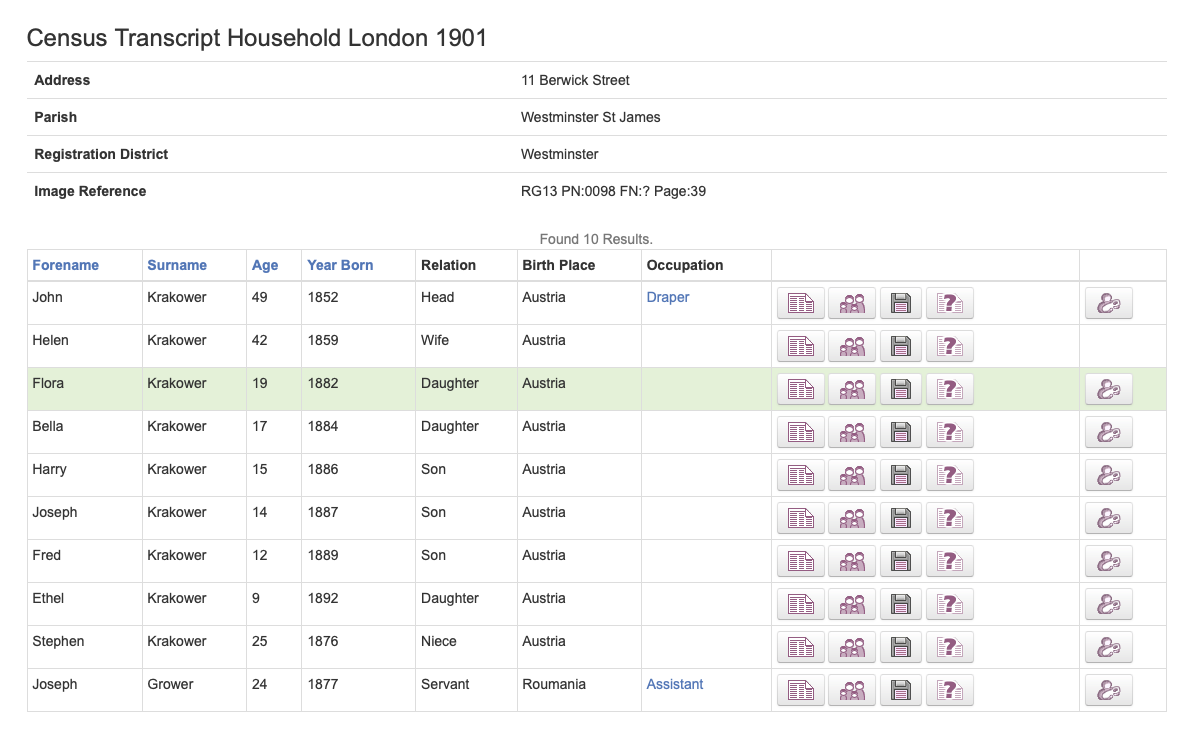 Flora Krakower's family were also in the rag trade in 1911

How do we explain the various appearances of 'Pilpel' and 'Williams', though? This would no doubt need further research, but my belief is that the family name was Pilpel – corroborated by the Jewish Chronicle – and Hyman's middle name was William. At some point in the first decade he decided to Anglicise his name, borrowing his middle name and turning it into the surname Williams, with the more 'foreign-sounding' Pilpel fading away. This was an era of complex Anglo-Jewish relations: the Jewish population had rocketed from 46,000 in 1880 to a quarter of a million by the end of WW1, partly fuelled by pogroms in Russia, and many Jews sought to assimilate into English culture, especially when antisemitism also grew. 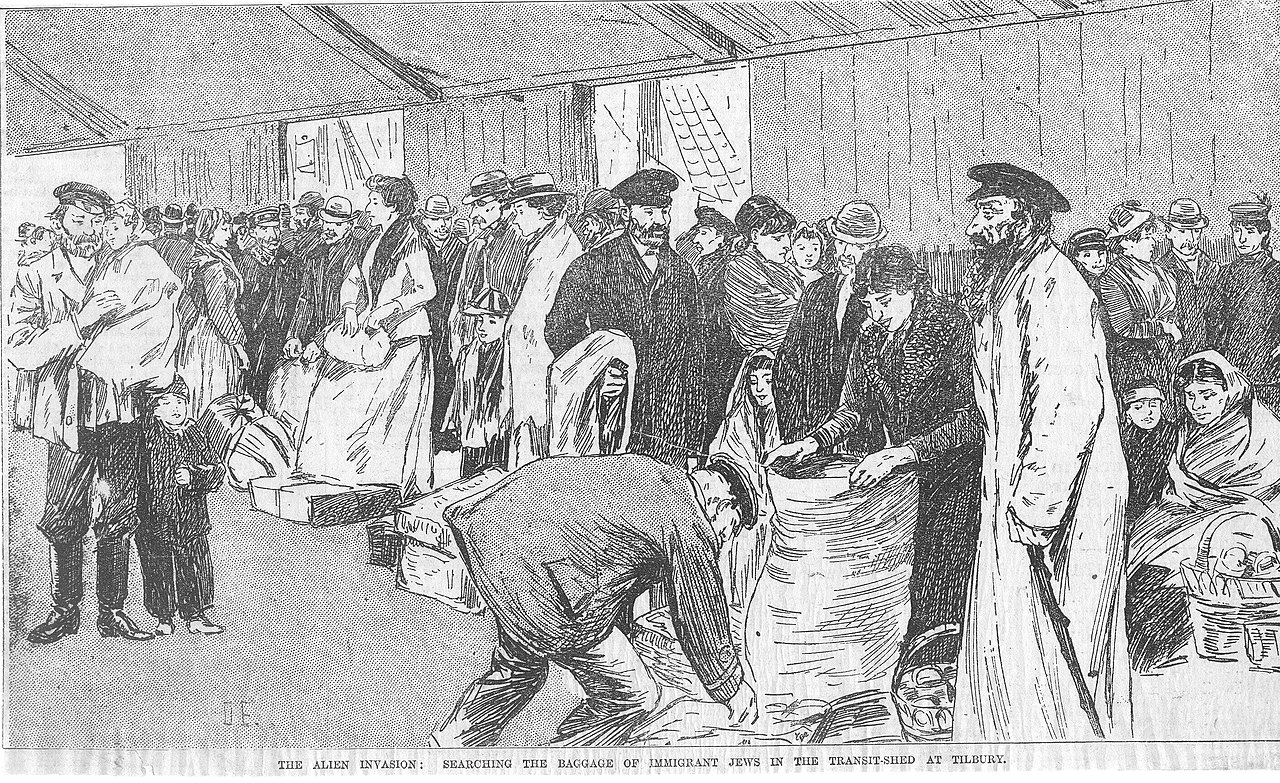 This picture of Jewish immigrants arriving in Tilbury c. 1891 is captioned 'The alien invasion', revealing that Britain's sometimes xenophobic concerns over asylum seekers are nothing new

What this has certainly revealed is that while Matt Lucas's maternal grandmother's roots were all in Germany, his paternal grandfather's were unequivocally in Austria. And indeed we can also learn about his ultimate origins on his father's side. Sadly John Stanley Lucas, listed as a 24-year-old assistant sales manager on his marriage in 1968, died in 1996. Matt says at the start of the WDYTYA show, the loss of his father when Matt himself was only 22 brought 'a profound sense of loss' and 'I realised there aren't always happy endings'. That same marriage certificate shows that John's own father had already died (sadly a few months beforehand, in fact), and he was a certified accountant with the first name Harry.

Using TheGenealogist's civil registration indexes, we can piece together that Harry Lucas was born in Bethnal Green in 1912 and in 1936 he married one Fanny Lischinsky. If we search for her name at TheGenealogist, we also discover she was born not far away, Mile End, in the same year, and her mother's maiden name was Koffman.

From these data we can then push back to establish that her parents were Solomon Lischinsky and Malkah (also known as Pesia) Koffman – both of whom were born in Poland. 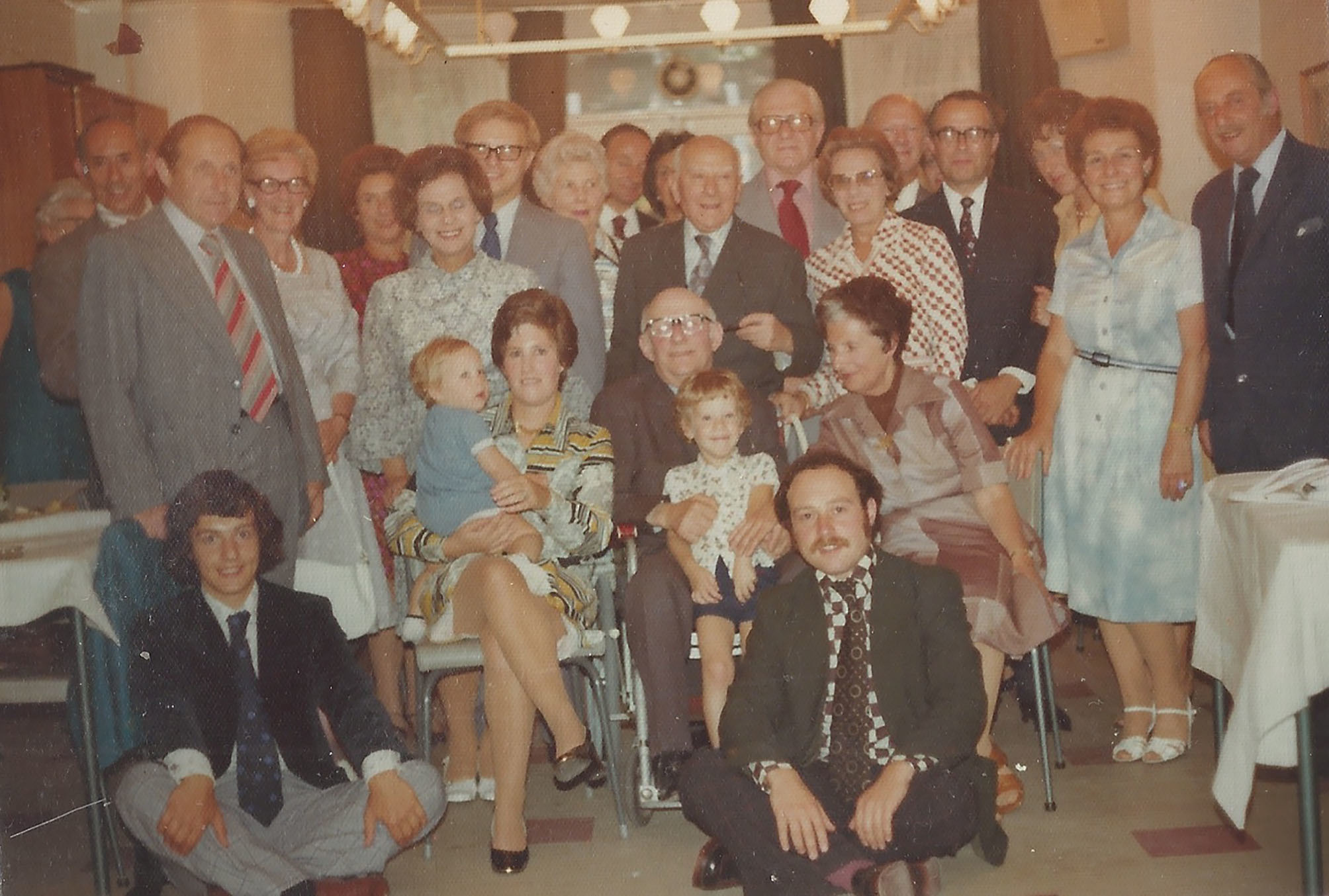 Matt's great-grandfather Solomon was a synagogue seatholder, as revealed at TheGenealogist

Here TheGenealogist's Jewish seatholders records can help us out – for Solomon was one of them at the East London Synagogue, and his address is given as 4 Beaumont Square, in Stepney. This record collection covers men who held office in their local place of worship, such as wardens and committee members, but also many female seatholders.

Back on the Lucas side, we discover another possible change of name, just as we did with the Pilpel/Williams family. Harry's father was Israel Lucas – the 1911 census reveals that he was 33 then, married to Annie (other records reveal her maiden name was Miller and she was born in Poland). He was born in Bialystok, listed here as in Russia – Byalistok is today in the north-east of Poland, near to the border with Russia, and had been part of Russia from 1807 until Poland was reconstituted as an independent nation after WW1. Deeper digging in the records, though, appears to suggest he was the same person as one Israel Isaac Zaludsky – where the 'Lucas' came from isn't clear, but once again the likelihood is this was a conscious Anglicisation.

While the TV show delves into the grim experiences of Matt Lucas's Jewish cousins in Germany and the Netherlands, here we've seen how online resources provide a wealth of details about his other forebears here in Britain – although also revealing that all of them ultimately came from Jewish centres in other countries, and sometimes they had to change their names to assimilate better in their adopted country. Certainly the Little Britain TV star has a far-from-British and fascinating family history.

This picture of Matt's wider family shows Matt's mother Diana and her father Maurice Williams at the centre, with Matt on her lap and his brother Howard on Maurice's. Matt's father John is behind Diana, wearing glasses, and Margot is to Maurice's right. Credit: BBC/Wall To Wall Media Ltd/Diana Lobatto