On Pease Hill in a West Berkshire village is a Grade II listed manor house. The land on which the house stands had been a part of the Bucklebury Estate that had belonged to the Winchcombe family and their descendants for many generations. Indeed the estate boasts that it had had only two owners over the last 900 years – firstly Reading Abbey and then people who could trace their lineage back to the Winchcombe family.

The Chelsea Pensioner is an iconic figure who for centuries has been held in high regard in the national consciousness. Since 1692, when they were founded by King Charles II, the Royal Hospital Chelsea has been the home for men, and recently women, who have served and retired as soldiers or non-commissioned officers of the British Army. While the Royal Hospital continues to this day to offer care and comradeship for veterans in recognition of their loyal service to the Nation, in the past some pensioners, known as Out-Pensioners, received their financial support from the Royal Hospital, but lived outside of it in the community.

On the evening of the 3rd April 1881 Charles Darwin and his wife Emma were at home in Kent. It was the night of the census and from a look at the record we can see that they had a fairly full house at that time. Those staying under the roof that night at Downe House consisted of grown up members of the family, visitors and eight servants.

The Times was originally founded by publisher John Walter on 1 January 1785 as The Daily Universal Register, then on 1 January 1788 adopting its new name by which it is still known today. The paper is also known by its nickname of 'The Thunderer' which it gained in 1830 when a letter was published which contained the phrase "...we thundered out that article in Tuesday's paper which caused so great a sensation." The nickname The Thunderer then stuck.

Exploring snapshots of history through first-hand accounts, Andrew Chapman tells the tale of the first rhinoceros in England. "Recently one of my children told me about a David Attenborough documentary that mentioned a rhinoceros called Clara which toured Europe in the 18th century, and ultimately died in London. This piqued my curiosity – surely there must be accounts of her British visit?"

If you want to find out about the value, use, extent or ownership of an ancestor’s property or piece of land in England or Wales around the beginning of the 20th century, then these IR58 records from the Valuation Office Survey are a gem. The survey, which was carried out between 1910 and 1915, provided a unique snapshot of land and property in the Edwardian era. It asked its worth, how it was used and by whom. The unintended consequences of this government ordered survey is that, looking back from our position in the 21st century, it has inadvertently provided us a great picture of society in Edwardian times for us to use in researching our family's story.

Nowadays, as a family historian, I know just which tools to use in order to investigate a snapshot of a house and its residents, but at that time I had no idea. One of the first recordsets to consult are the census records, as most researchers will know. If you are just setting out in the family history journey you would be well advised to look at those on TheGenealogist as they come with the benefit that for the years 1891, 1901 and 1911 (soon to be followed by later years) TheGenealogist has linked these census results up to its Map Explorer™. This powerful interface drops a pin onto the building, street or parish on the map of the area. With this resource making use of a number of georeferenced historical and modern maps, the Diamond and now also the Gold subscriber to TheGenealogist is in a much better position to see where their ancestors had once lived.

Sydenham Hill is fascinating. It rises higher than most in London, topping 350 feet at the southern end of the road that shares its name. Thus the simultaneous release of both areas' Lloyd George Domesday records by TheGenealogist and linking them to its Map Explorer™ allows us to take a look at this interesting part of the metropolis. Perhaps the most iconic building that once stood there was the Crystal Palace, relocated from Hyde Park after the Great Exhibition had closed in 1851.

TheGenealogist has completed adding its exclusive National Tithe Record Collection for all of England to their powerful Map Explorer™ tool. This milestone means that all of the available surviving English tithe maps can now be used in conjunction with georeferenced maps from other periods, including modern satellite and street maps. The Map Explorer™ allows the researcher to switch seamlessly from identifying an ancestors' plot of land on the Victorian Tithe map to viewing its exact coordinates in another era. With a choice of modern maps to pinpoint the plot today, or to see it in other historical periods, the researcher is able to explore the changing landscape of the area in question.

A census allows us as family history researchers a snapshot of the country at a particular time. It gives us the chance to find out where our ancestors were on census night. This is very important for us to discover details of family members, dates and places of birth and so on. But a census also allows us to look at where our ancestors' home was in relation to its neighbouring properties.

In February 2022 Elizabeth II became the longest reigning British monarch with 70 years devoted to her country. The summer of 2022 sees Britain and the Commonwealth mark the Platinum Jubilee of Queen Elizabeth II with particular festivities held from 2nd to the 5th June over a four day public holiday. Whether you are a Royalist or not, it is quite a remarkable thing that we are marking.

Andrew Chapman surfs some waves from Richard Osman's episode of Who Do You Think You Are? and uses online resources to get a deep sense of place over time. "To me, Brighton's always been my home town," he says. "My whole family are from here – I know my granddad's family are, I know my nan's family are as well. I don’t know how deep those roots go." 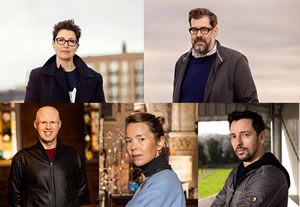 Wimbledon: From Grazing Land to the Grass of Centre Court 6th May 2022

As the countdown to the tennis season at SW19 gears up with the tournament’s schedule start on the 27 June 2022, TheGenealogist has released the IR58 landowner and occupier records for the Merton area in the 1910s. These property tax records include the listings for both the past and present grounds of The All England Lawn Tennis and Croquet Club allowing us to see what became of each.

A recent stop in the Leicestershire market town of Ashby-de-la-Zouch found me looking at its magnificent ruined castle that is now looked after by English Heritage. The castle I learned was built by William, Lord Hastings, who had been a favourite of Edward IV, after 1473. Erected on the site of an older manor house with two large towers and some smaller buildings it had begun to go up by the year 1483, when Hastings met his untimely death.

Harrow School was founded in 1572 by John Lyon, a local landowner and farmer, under a Royal Charter of Queen Elizabeth I. When he died in 1592, his estate was given to two beneficiaries: the school and for the maintenance of two roads that ran to London 10 miles away. These were the Harrow Road and the Edgware Road and it seems that they received by far the greater share of the money while the school's share provided just for the salary of The School Master and some other small provisions.

One of the most fascinating aspects of researching our ancestors is finding out about where they lived. Records that give us an address allow us to do this and with the intelligence that these provide our next move is often to turn to a map. If the recordset is linked to mapping this is even easier for us as researchers however not all maps are equal. Thankfully TheGenealogist has addressed this with their recent update to the 1939 Register by linking all the results from this pre-WW2 survey to its Map Explorer interface.

From showgirl to Dame of the British Empire 17th January 2022

During World War I Lady Byron strongly supported the war effort and was behind the sending of matches to soldiers serving overseas in boxes labelled 'A Match for Our Matchless Troops from Lady Byron'. She also was behind a 'Give Him Socks' campaign. When her husband Lord Byron died on 30 March 1917 that same year she was appointed Dame Commander of the Order of the British Empire (DBE) for her creation of the Bluebirds' Nest, a rest home on Hampstead Heath for nurses serving on the Western Front. The house she chose to use was number 11 Tanza Road near Parliament Hill.

Every year the popular BBC series Who Do You Think You Are? brings us a host of new and exciting stories. We have taken a look at each celebrity as they journey into their family history, and you can read about their discoveries in our articles.