Using the Times Newspaper to find deaths, divorces and a great deal more

The Times was originally founded by publisher John Walter on 1 January 1785 as The Daily Universal Register, then on 1 January 1788 adopting its new name by which it is still known today. The paper is also known by its nickname of 'The Thunderer' which it gained in 1830 when the newspaper was strenuously campaigning for action to be taken to look more closely into the strange death of the second Lord Graves who had supposedly killed himself. The verdict of sucide, and the speed at which it was decided, looked to the paper like a high society cover-up that was presumably meant to avoid further scandal. The Times attacked the verdict in its pages and the conduct of the inquest with a leading article that was most likely written by one of its journalists at the time, Captain Edward Sterling. The piece caused some reaction from other newspapers in the country and The Times received a letter from the coroner. This letter was then published alongside another leader, which contained the phrase "...we thundered out that article in Tuesday's paper which caused so great a sensation." The nickname The Thunderer then stuck. 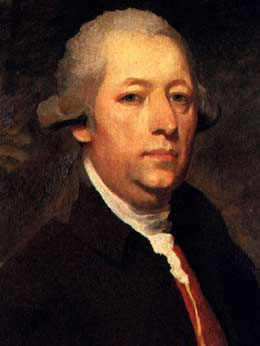 The Times Friday June 10, 1870 from TheGenealogist's Newspaper and Magazine Collection

In more modern times the newspaper was responsible in 1931 for the well loved iconic and popular typeface that is used by many of us on our computers and which is known as Times New Roman.

The Times was actually the originator of this widely used serif typeface that had been designed in collaboration with the Monotype Corporation for its legibility in low-tech printing. In November 2006, The Times began printing headlines in a new typeface known as Times Modern. 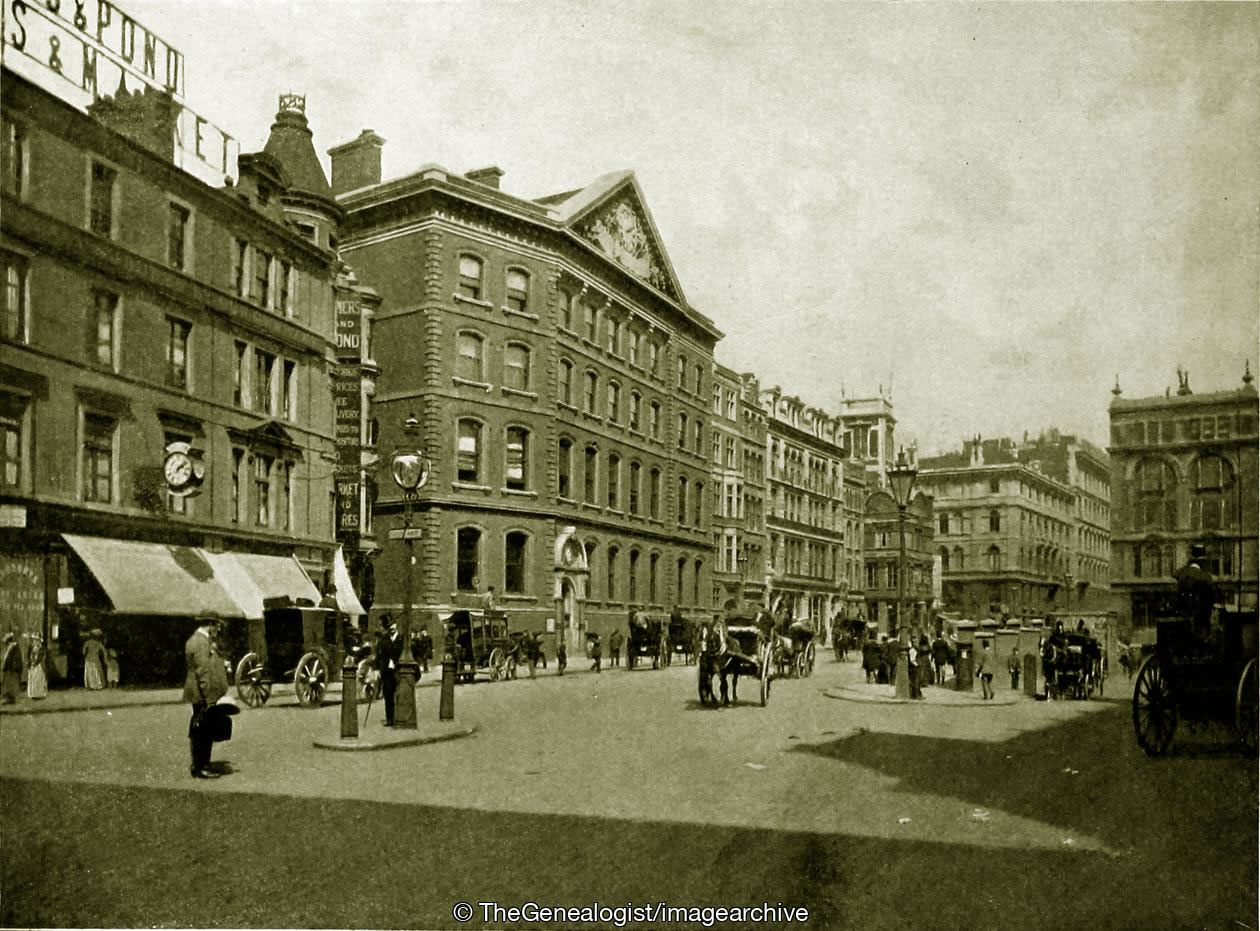 Death of an author, Birth notices and Divorce cases

The Newspapers and Magazines Collection that can be found on TheGenealogist are a tremendous way for a researcher to find some background details for our ancestor's lives to get a feeling for the period in which they lived as the articles are contemporary to their times. You may even be lucky enough to find your ancestor mentioned in an article or a family announcement which can add significantly to your family story. TheGenealogist is planning to release many more decades of this newspaper in the future and has begun by bringing to its Diamond subscribers the editions that were originally published in the years that make up the 1870s decade.

To see how this resource can be used by a researcher let us examine one particular day's copy – the edition that came out on Friday 10 June 1870. A glance at The Times' pages on that day reveals that Queen Victoria was at Balmoral Castle. The House of Commons had returned after the Whitsuntide holidays and were sitting to consider the Customs and Inland Revenue Bill. From the classified advertisements we see that visitors to Crystal Palace could watch the last but one performance of Cinderella at 3 pm. And at the same venue on the next day go to the "Second and Last Great Flower show and Display of Table Decorations". The Times also devoted some of its column inches to sadly announcing the sudden death of a well loved author, Charles Dickens. Further into the paper they dedicate more space for a precis of his life.

For the family historian, however, it is a name rich resource which can be used to good effect if one of their ancestors is named in its pages. Like many other newspapers, The Times carried a number of Birth Marriages and Death announcements which could be found on the front page and may be a reason that an ancestor's name and address obtained a mention in this publication. 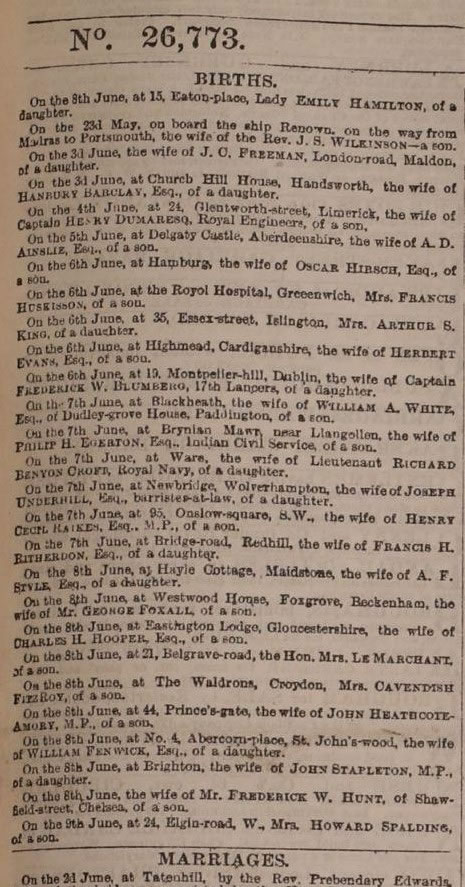 Find Births, Marriages and Deaths announcements in The Times 1870 decade from TheGenealogist's Newspaper and Magazine Collection

Discovering that one of our forebears had been recorded in this newspaper may surprise a researcher. The inclusion in its pages could, however, be for a number of reasons. Perhaps the ancestor was the subject of a story because they were a victim or witness to a crime. They may have worked as a police officer, lawyer or a member of the court that had been a part of a legal case that The Times had reported on. They may have been noted in a list of professionals who, having passed their examinations, are being admitted to their regulating body or granted higher status within it. In the example edition that we are looking at, a case in point is a list of newly qualified Fellows of the Royal College of Surgeons. 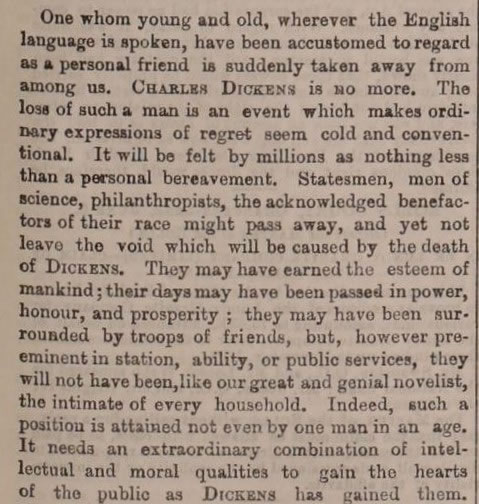 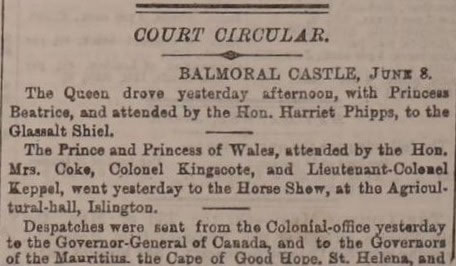 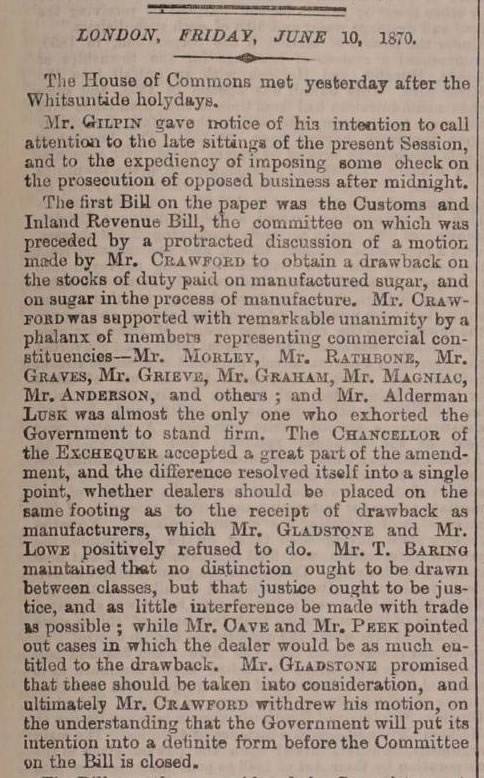 Report from the House of Commons naming MPs 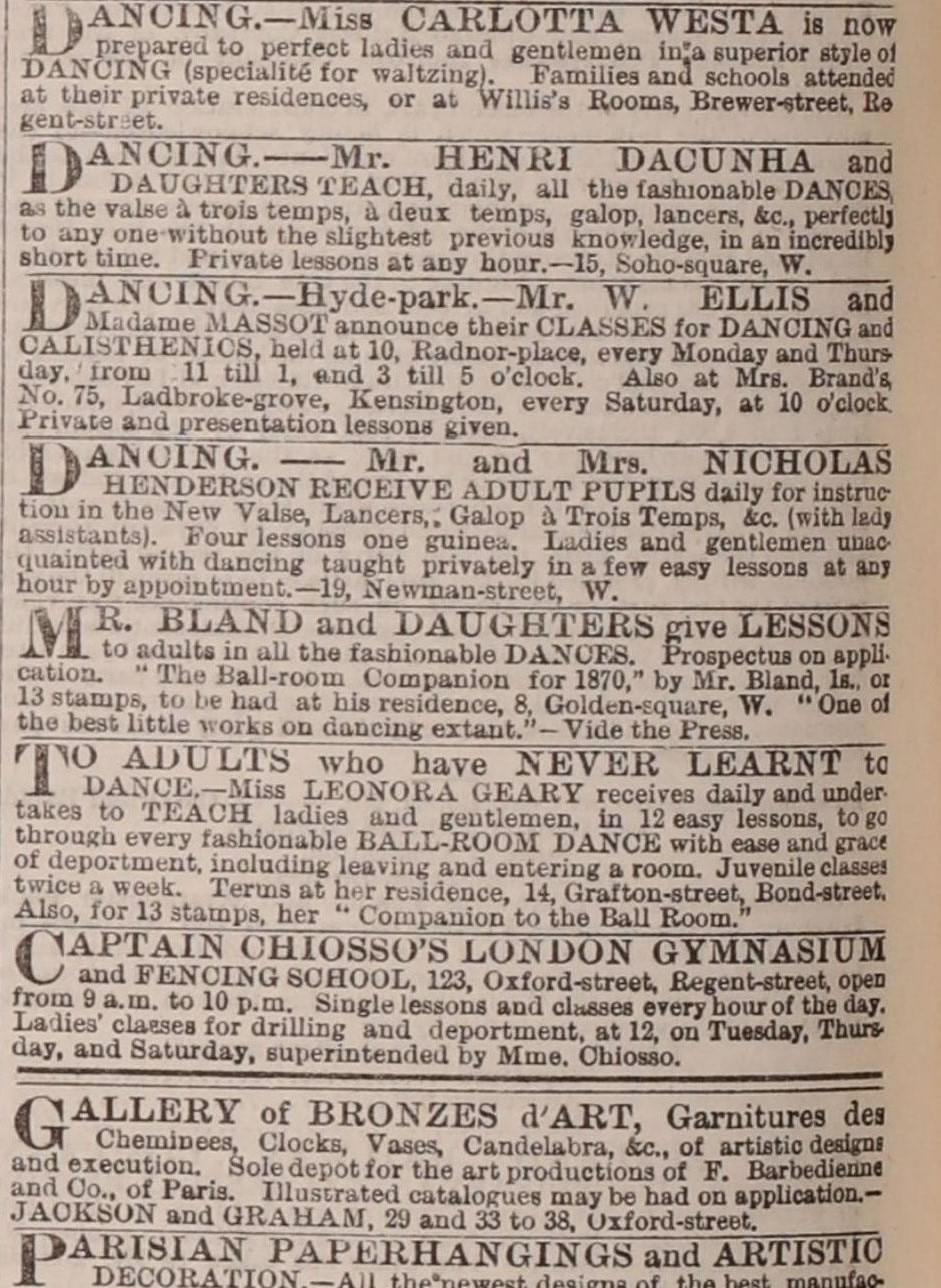 It is not, however, just the great and the good members of society that appear in a search of The Times on that day. Perhaps surprisingly the parties to the various divorce cases that are listed in its pages would seem to be ordinary folk from across the country. Though these cases are not usually reported on in any depth, simply confining themselves to providing the names of the petitioner, respondent and co-respondent, their inclusion could provide a researcher with a useful nugget of information about an ancestor. The reader can learn the part of the country in which the married couple had lived and very often an occupation for the man.

In the examples reported in the edition for Friday 10 June 1870 in a case where a man's wife had left home to live with another, we discover that the petitioner was employed "at some works at Burslem, in Staffordshire" while the co-respondent in the case was a grocer's assistant.

Another respondent, accused of ill-treating his wife and since been guilty of adultery, had been "employed in the nail-making trade at Wolverhampton". A further case of a petitioner whose wife had deserted him to live with her uncle, had "a situation in the Custom-house at Bristol".

The reports on proceedings in the Court of Bankruptcy can also provide details that a researcher may find of use if it refers to a forebear's case. In the particular edition that we have chosen to concentrate on the debtor's business (shipowner) and address (Billiter Street) are usefully provided in the proceedings for bankruptcy against Sir William Russell M.P. for Norwich.

Copies of The Times newspaper for the 1870s decade are a useful addition to the suite of records and resources available to the Diamond subscribers of TheGenealogist because of the name-rich nature of their pages. With this newspaper you may come across the names of ancestors caught up in the stories reported at the time, or mentioned in criminal court proceedings, bankruptcy and divorce cases catalogued within its pages. The family announcements for births, marriages and deaths add yet more names and details that the family historian could usefully access via TheGenealogist. 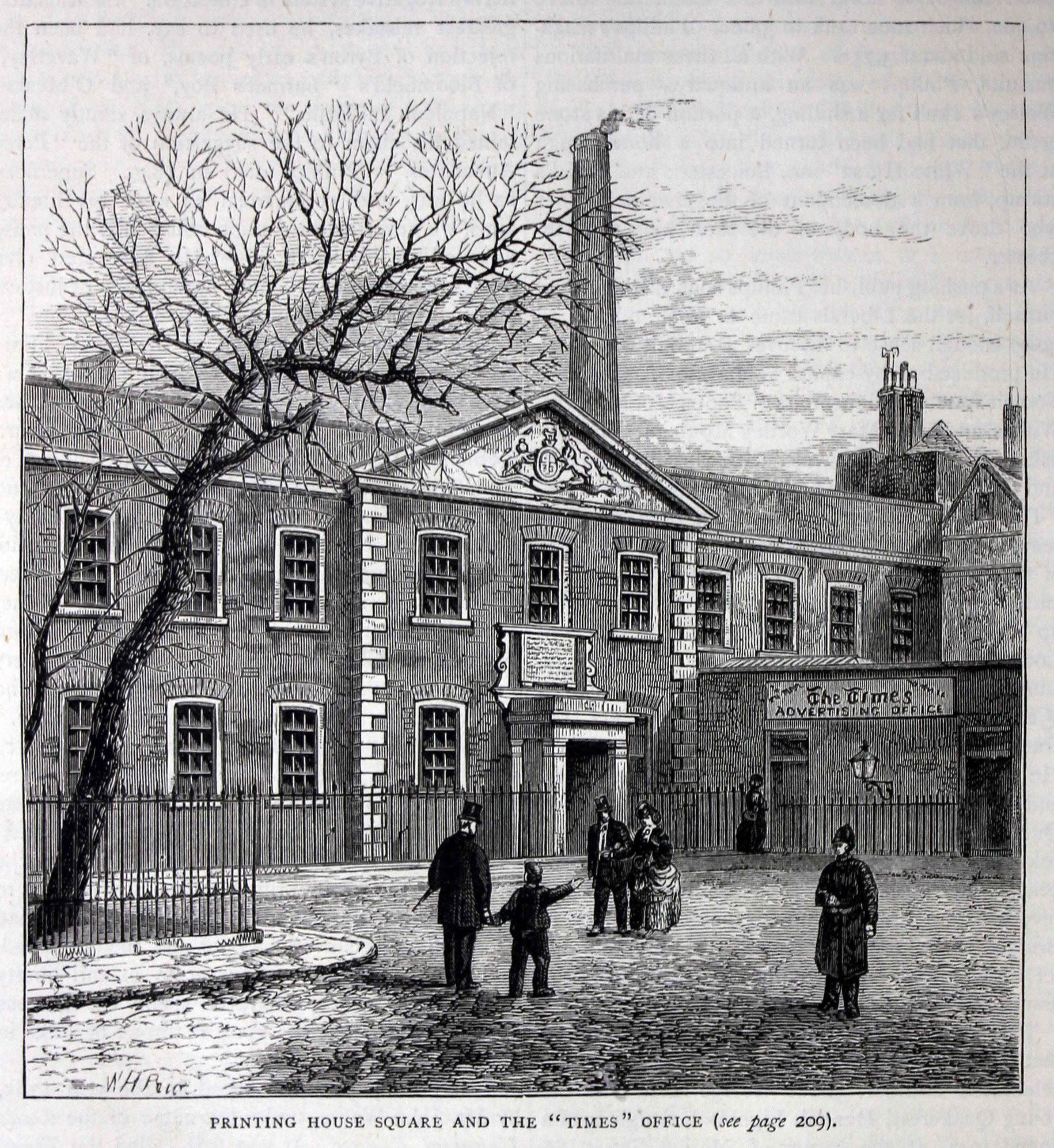