Born on the 11th December 1883, at Comber, County Down, Ireland, Edmund was the youngest son of Arthur Hughes De Wind, a Civil Engineer who died in 1917, and Margaret Jane De Wind, of Kinvara, Comber. Edmund De Wind received his education at Campbell College in Belfast, as we are able to find from a swift search of the Educational Records that are on TheGenealogist. 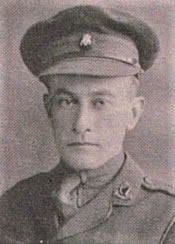 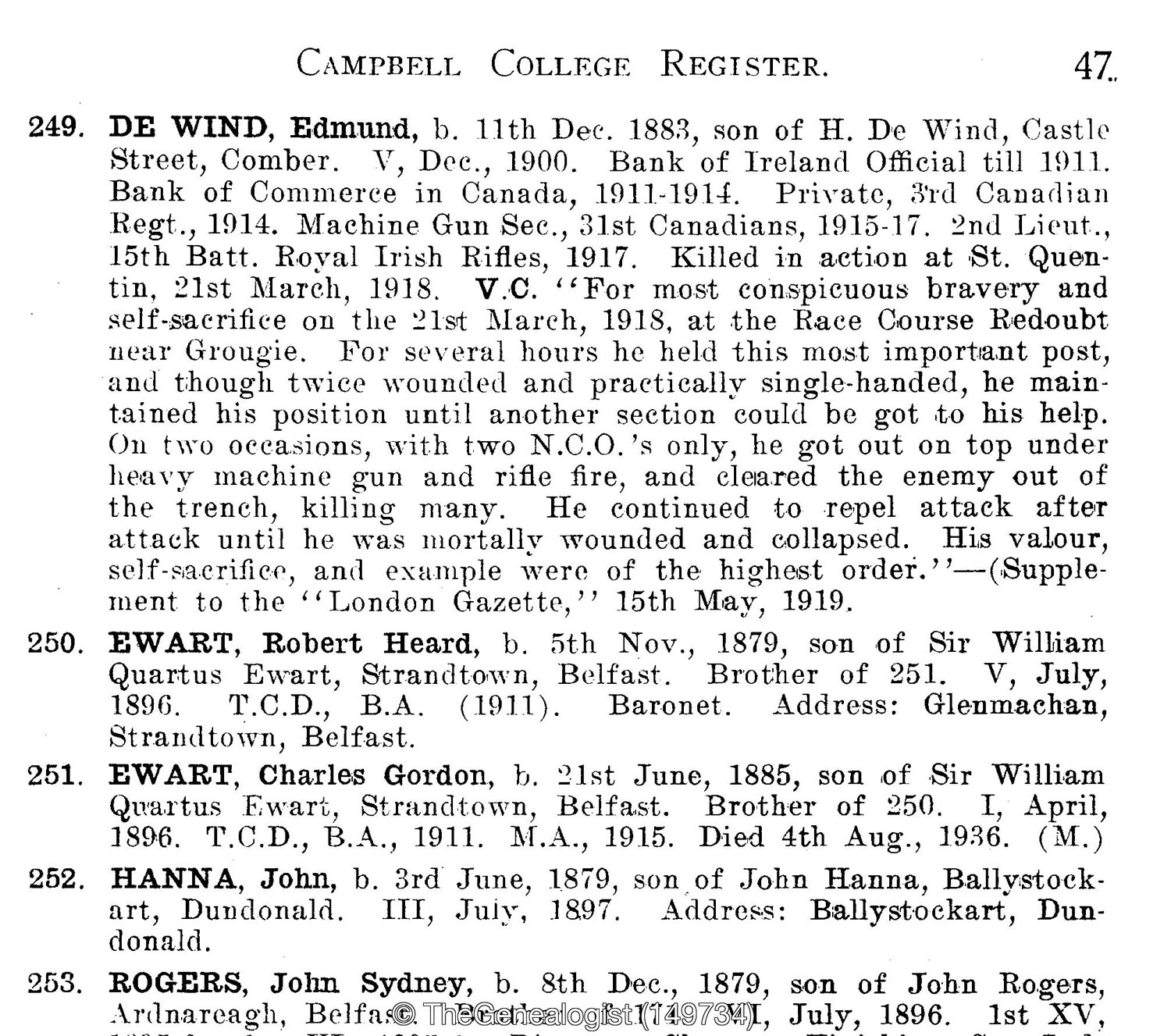 Campbell College Register from the Educational Records on TheGenealogist

After attending this school he chose to go into banking, becoming a clerk in the Bank of Ireland at Cavan. This, we can confirm by looking at the 1911 Irish Census which is available to be searched on TheGenealogist. In this census count, taken on 2 April 1911, he is recorded as a 27 year old Bank Clerk in a boarding house in Drumelis, rural Cavan. It is the house of two elderly spinsters, the Elliot sisters, but Edmund was not destined to be staying there much longer. Towards the end of this year he would emigrate to Edmonton, in the province of Alberta in Western Canada where he would continue his career in banking but now employed by the Bank of Commerce. His journey to get there would at first take him across the Irish Sea to Bristol and then on to cross the Atlantic on the ship The Royal George. We are able to use the passenger lists on TheGenealogist to find the young Irishman sailing to Montreal from Bristol on the 1st November 1911. This is a period before the partition of Ireland into two states and so Irish passengers were recorded as being British, albeit in the column specifically for Irish passengers while English, Scotch (Scottish), Welsh and British Colonial subjects had their own columns. 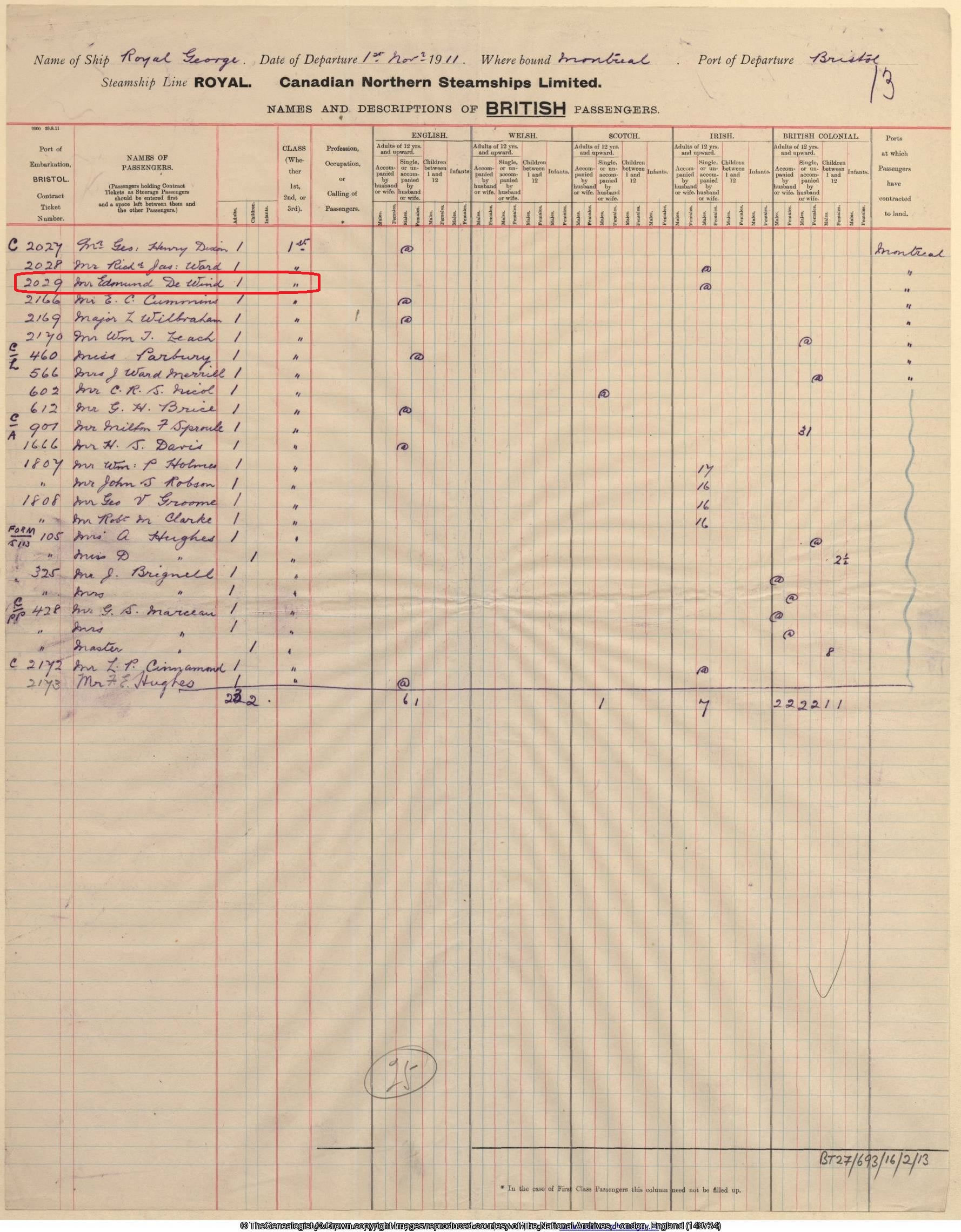 By searching in the Military Records on TheGenealogist we are able to find confirmation that De Wind received a Victoria Cross in the First World War. This record gives us a useful precis of his military service, as well as the reason for him being given the posthumous award of this top British honour for gallantry.

We are able to read that he had taken a keen interest in the Ulster Volunteer Force even while he was living far away from his roots in Alberta, Canada. While resident in his new country, with WW1 raging in Europe, he joined the Army in 1915, as a Private going into the 31st Battalion, Second Canadian Contingent. Private De Wind was sent to Europe with this battalion and served in the machine-gun section from 1915 to 1917 taking part in the battles of St. Eloi, Ypres, and the Somme.

When he qualified for a commission, he was then posted to the 17th Battalion Royal Irish Rifles on 26 Sept. 1917, at Dundalk. The newly commissioned officer went back to the front and here he joined the 15th (North Belfast) Battalion of his new regiment where he served in the Saint-Quentin area with the Ulster Division. This was until the great Retreat, in which his battalion suffered very heavily. Edmund De Wind was killed in action and was posthumously awarded the Victoria Cross as can be found by searching the London Gazette, 15 May, 1919. The words from The Gazette are reproduced in the Victoria Cross record that are found on TheGenealogist:

"Edmund De Wind, Second Lieut., 15th Battn. Royal Irish Rifles (North Belfast Volunteers). For most conspicuous bravery and self-sacrifice on 21 March, 1918, at the Race-course Redoubt, near Groagie. For seven hours he held this most important post, and, though twice wounded and practically single-handed, he maintained his position until another section could be got to his help. On two occasions with two N.C.O.'s only he got out on top under heavy machine-gun and rifle fire, and cleared the enemy out of the trench, killing many. He continued to repel attack after attack, until he was mortally wounded and collapsed. His valour, self-sacrifice and example were of the highest order." 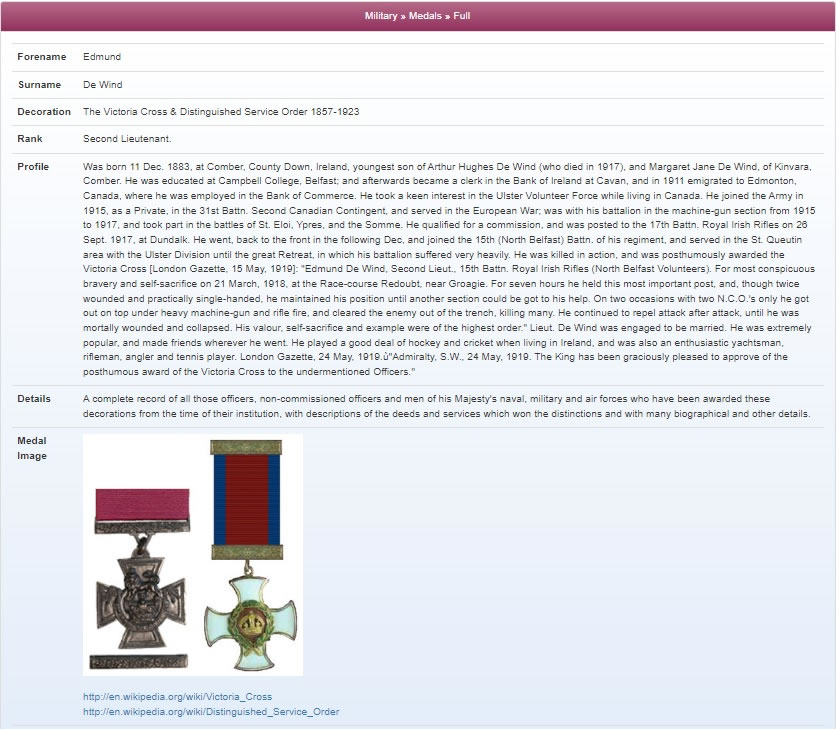 It was noted in this profile that Lieutenant De Wind was engaged to be married at the time of his death. He had been extremely popular making friends wherever he went. His pastimes had seen him play a good deal of hockey and cricket when he had lived in Ireland, and he was also an enthusiastic yachtsman, rifleman, angler and tennis player.

Edmund De Wind is one of many soldiers with a connection to Ireland to be commemorated in the attractively decorated memorial book that has been released by TheGenealogist into its Military records Collection. The records are fully searchable with linked images from the book Ireland: Memorial Records 1914-1918 that had been compiled by The Committee of the Irish National War Memorial. While it contained the names of 'Irishmen' this did include men who were born in England, Scotland and Wales with Irish connections. For that reason it may be useful to researchers looking for men such as these. 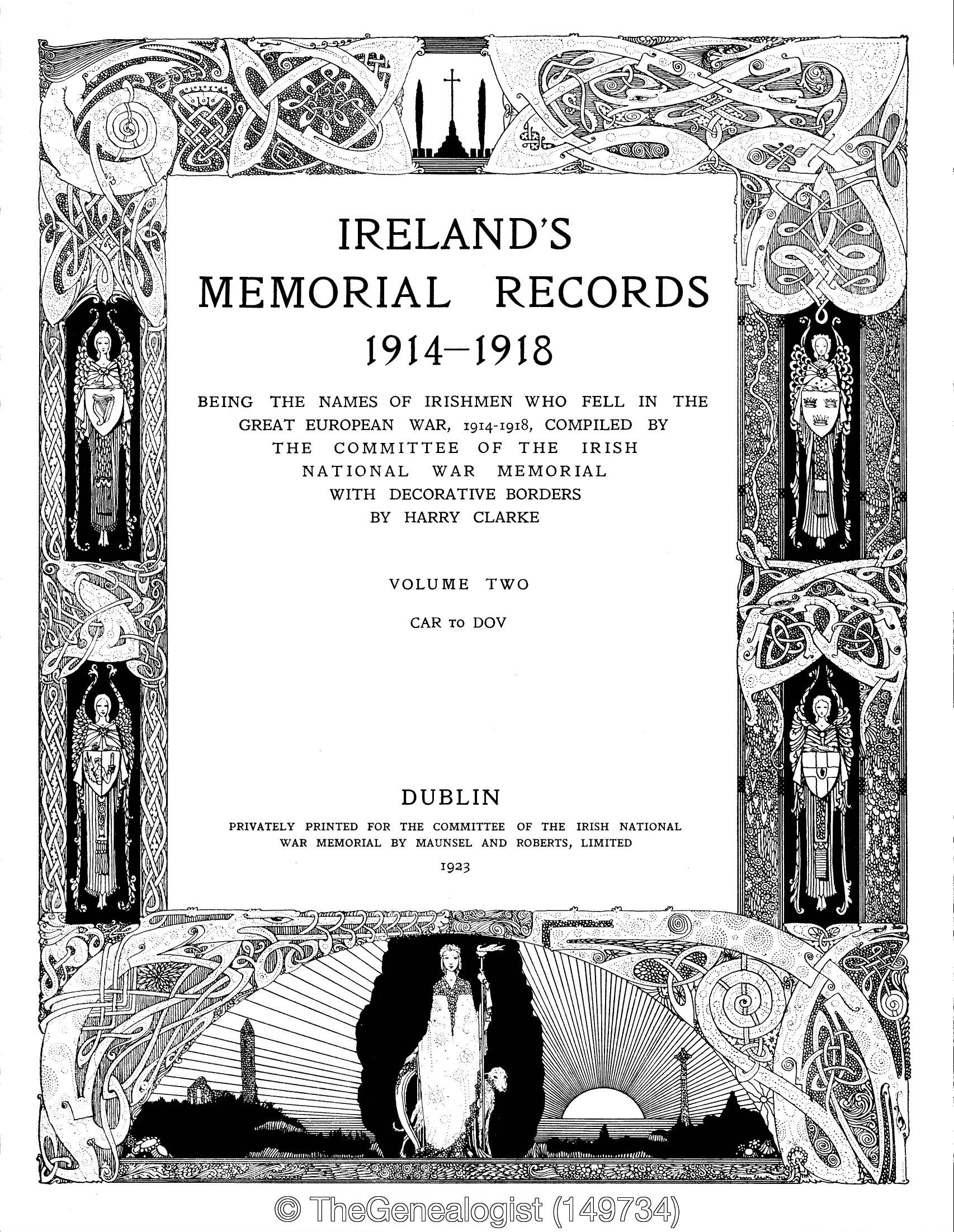 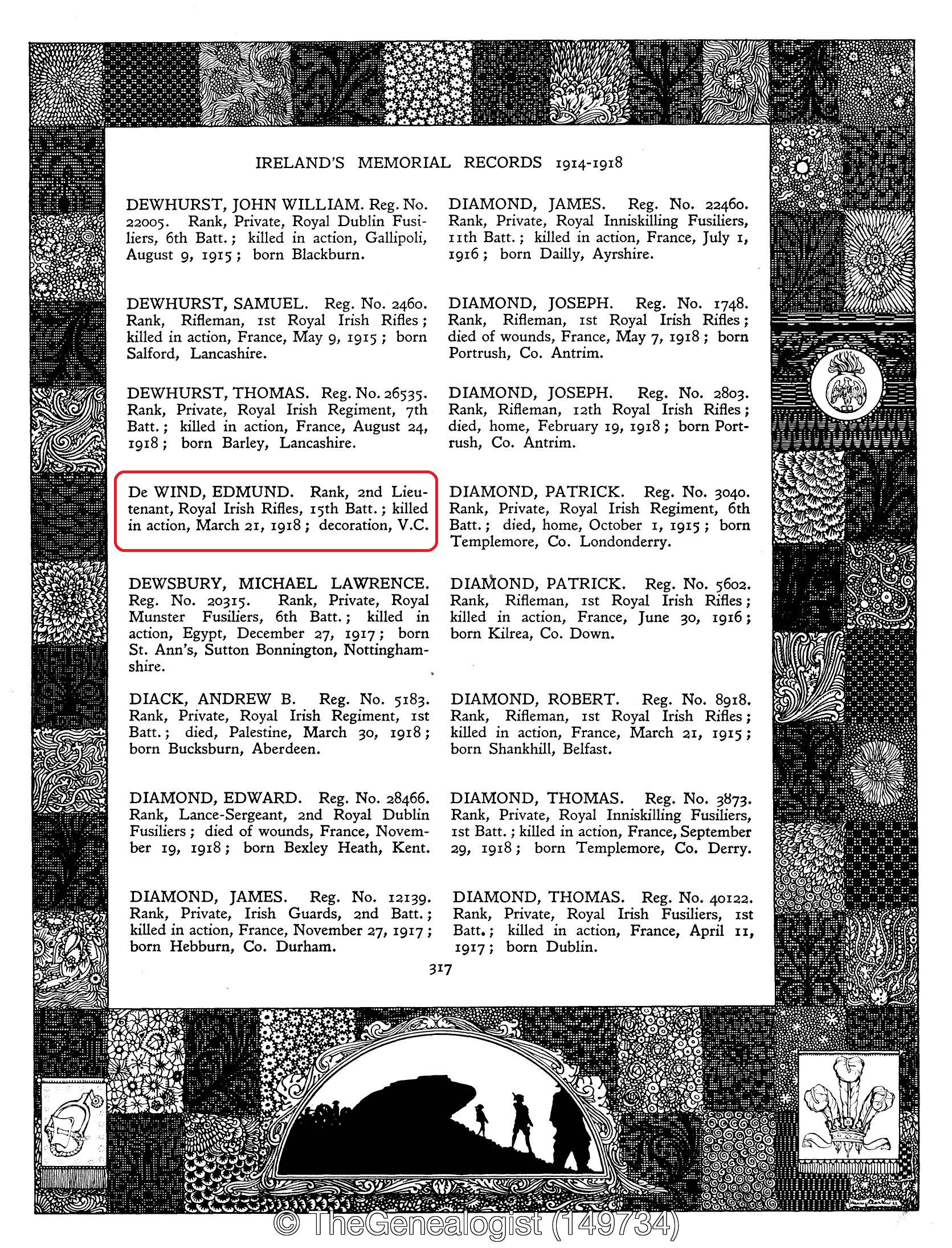 TheGenealogist has a wide range of Military Records ranging from Army, Navy and Air Force Lists to War Memorials through other useful records such as Casualty Lists, WW1 Death records, Medal cards, Rolls of Honour and much more. 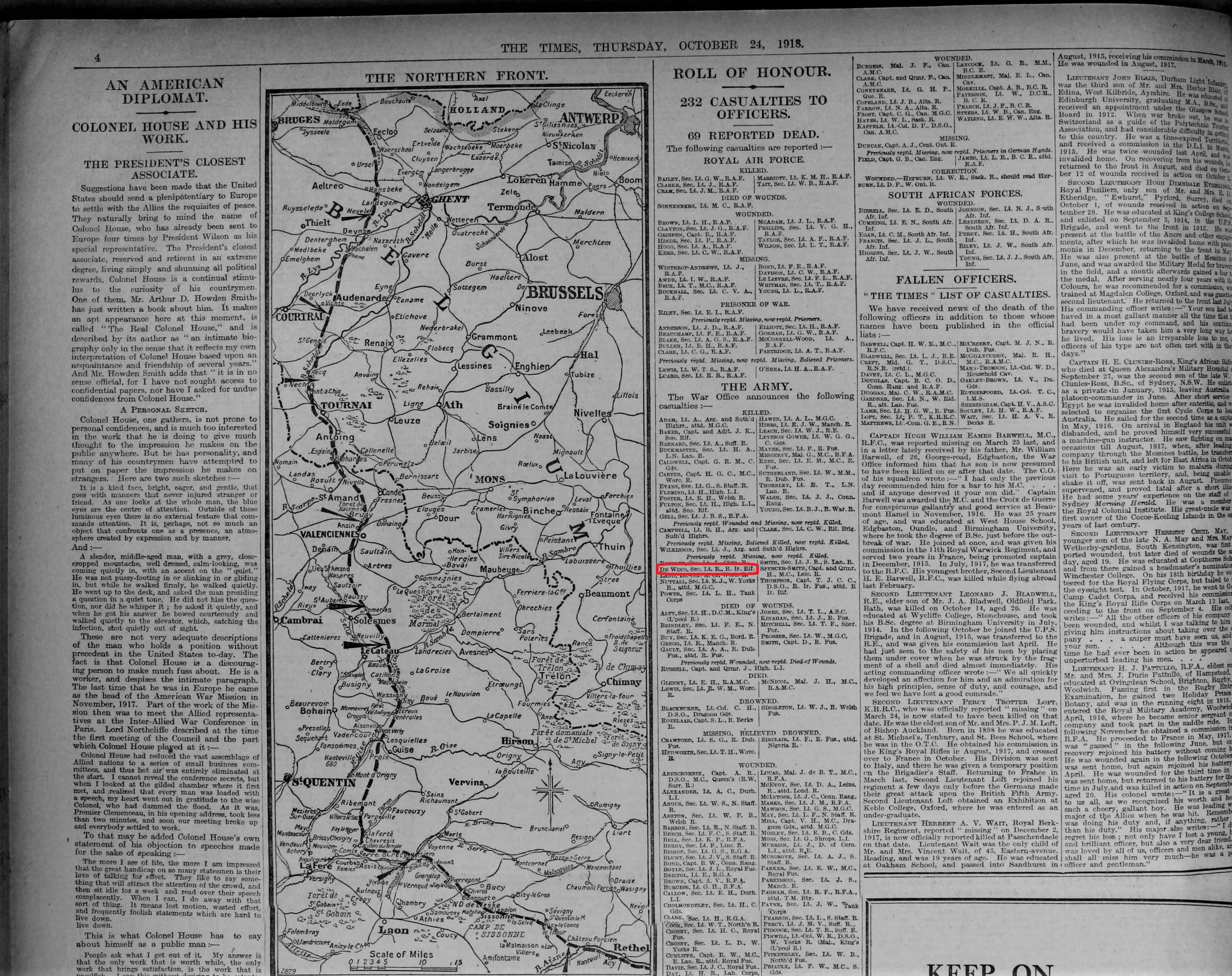 Another great resource are the Newspaper and Magazine collection that includes war time publications such as the Illustrated War News & Illustrated London News - These newspapers covering the First World War combine photography with the use of graphical illustrations from eye witness reports to give readers a flavour of what was happening at the front. Other newspapers to search on TheGenealogist include editions of The Sphere, Wipers Times, The Navy and Army Illustrated, The Somme Times and The Great War.

Researching our ancestors that had served in the wars is particularly pertinent at this time of commemoration – Lest we forget. 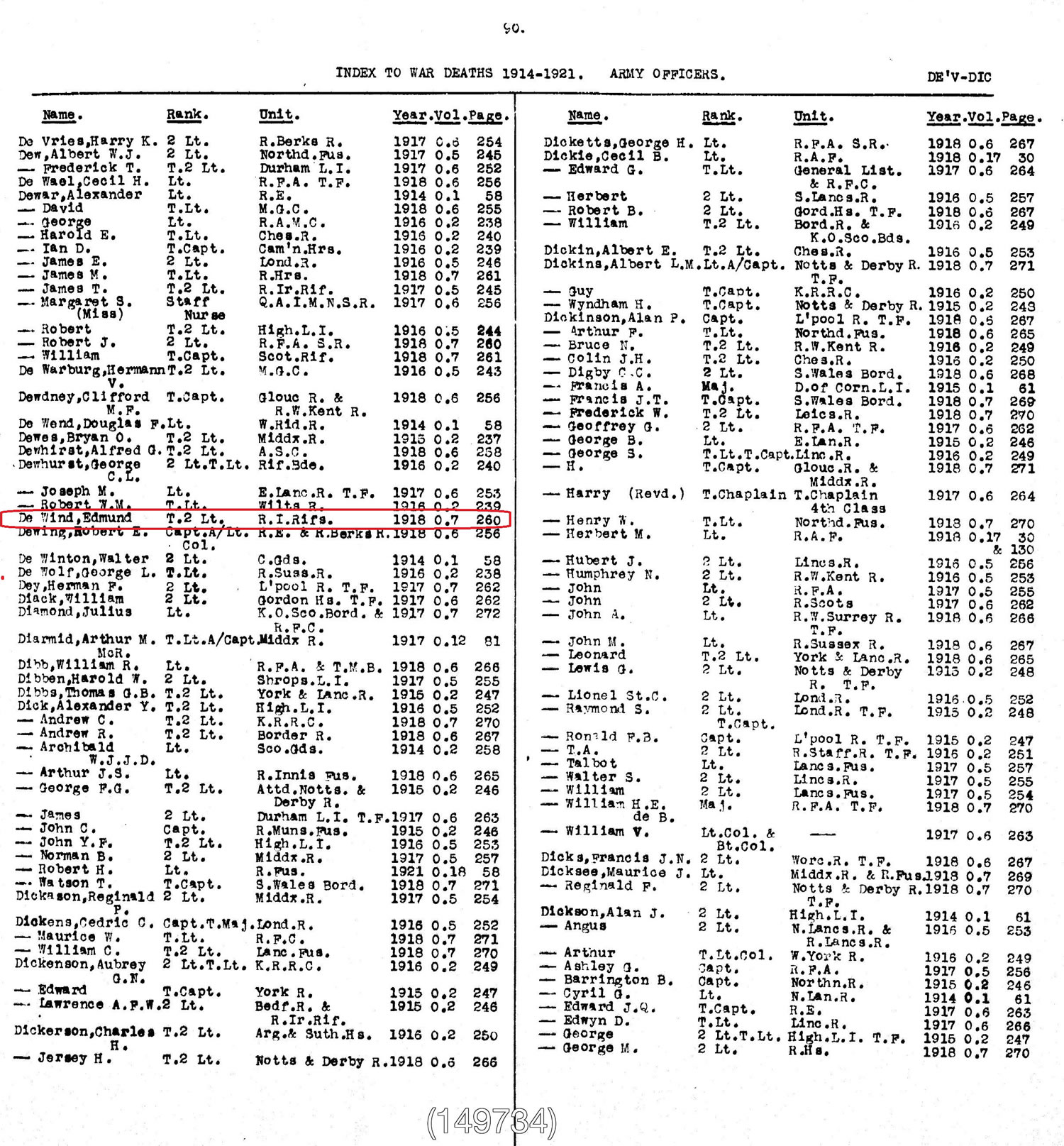