Una Stubbs - Who Do You Think You Are?

A regular in television and film for 50 years...

Una was born on the 1 May 1937 in Hatfield, Hertfordshire, to parents Clarence Reginald Stubbs and Angela Rawlinson. Clarence worked at the local Shredded Wheat factory in Welwyn Garden City and Angela worked in the cutting room of a local film studio for which Hatfield was so renowned. This may have also given young Una her first taste of show business.

With Una showing an interest in dance, she was sent to La Roche Dance School at age 14 and from there her career flourished. After starting off as a professional dancer, Una developed her skills further into the art of acting with numerous television and film roles.

Stubbs became one of Lionel Blair's dance ensemble before obtaining a role in Cliff Richard's 1963 film Summer Holiday. By 1966, she was playing Rita, the daughter of Alf Garnett in the long-running BBC sitcom Till Death Us Do Part.

For the following 30 years, Stubbs became one of the most recognisable faces on the small screen: in the 70s she was Aunt Sally in the children's TV series Worzel Gummidge; in the 80s she was team captain in the weekly game show Give Us a Clue; in the 90s, she was Miss Bat in The Worst Witch; and more recently she appeared on The Catherine Tate Show and EastEnders.

Una Stubbs' father, Clarence, was born in 1908 in York and married Angela Rawlinson, from Hertfordshire, in 1933 in Hatfield.

Here we find Clarence in the 1911 census with his family in York: 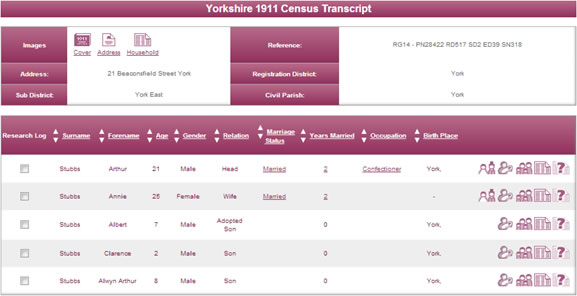 His father's occupation was a confectioner. Clarence had an older brother, Alwyn Arthur and also an adopted brother, Albert, who lived with him, his mother and father, Arthur and Annie. Arthur's birth date is 1889 and his birthplace is listed as York. Clarence was later to fall out with his parents and sadly Una never knew her paternal grandparents.

In the 1901 census, Arthur Stubbs is living at home with his parents, John and Elizabeth in York. John Stubbs is a house painter by trade and originates from Darlington. Here is their listing on the census., which shows Arthur as the eldest of 5 sons: 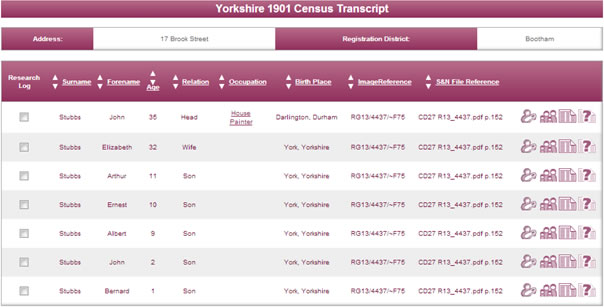 John Stubbs hails from Darlington, then part of Durham. We find him on the 1871 census living with his father Henry, a cabinet maker and his elder brother, George.

Henry had married Elizabeth Tait in Darlington in 1864.

Sadly Henry's marriage to Elizabeth was not a long one, Elizabeth died in 1869 at the young age of 30. We can see a copy of her death record on TheGenealogist.

Going further back to 1841, we find a young Henry Stubbs, aged 3, living with his parents, John and Elizabeth in Darlington, in the North East. John Stubbs is described as a 'Wool Comber' and it must have been a struggle to support his family in a traditional industry. Born in 1806, John's life would have been a far cry from the glamour of show business that has been experienced by his great-great- great grand-daughter, Una!

Here is the 1841 Census record for Darlington, with the Stubbs family living in Brunswick Street, Darlington. The street they lived in contains a number of workers in the wool and agricultural labour industry, from wool combers, John Stubb's occupation, to wool sorters, weavers and skinners.

On Una's mother's side, there appears to have been a bit more affluence. Angela Rawlinson was born in 1914 to parent's Charles Rawlinson and Kathleen Howard. On the Rawlinson side, Charles's father was George Rawlinson, a stockbroker agent based in St Pancras, London and originating from Lincolnshire. George appears to have done relatively well for himself, as the 1891 census shows the family living in St Pancras with a domestic servant. 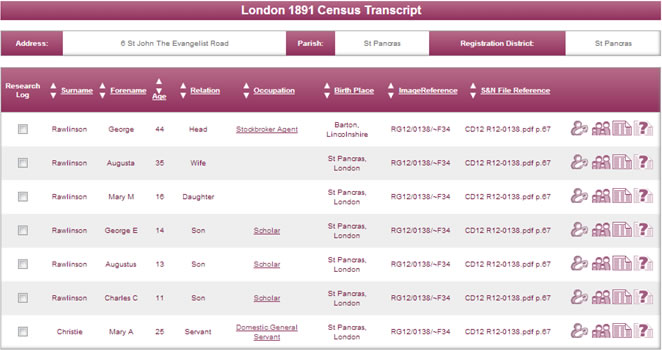 George married Augusta Brownsell in St Pancras. Her family had run an established butchers and tripe dressers in London for many years. Her brother, also called Isaac, carried on the family business in to the early 1900s.

Here is Augusta's father, Isaac, listed in the London Post Office directory of 1856. 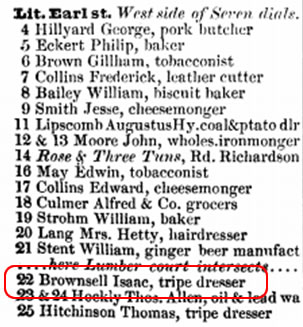 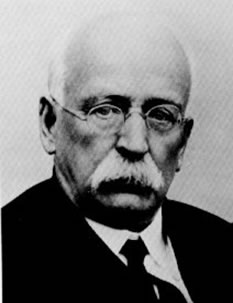 Una's grandmother on her mother's side, Kathleen Howard, also had connections with the decision makers and parliamentarians of London. Her father, Ebenezer Howard, was described by occupation as a 'Shorthand writer' in the City of London. He was a renowned journalist and had worked as a reporter for the Courts and Newspapers in the United States. Back in England, he recorded parliamentary discussions as a long-standing career.

He took an in-depth interest in living standards and had a vision of a suburban town in pleasant countryside surroundings. His visions went on to create Letchworth Garden City and Welwyn Garden City, which were revolutionary in terms of design. 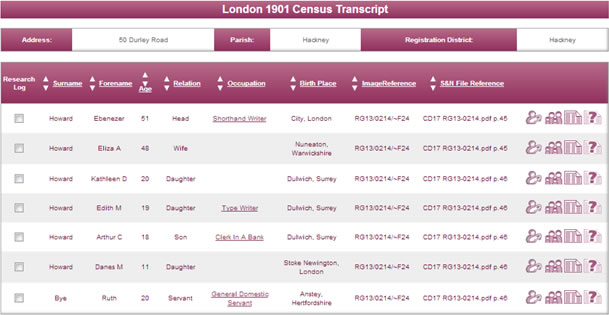 In 1901, Ebenezer Howard is living with his wife Eliza and 4 children in Hackney. By 1911, things have changed, his wife had sadly died, his children have left home and Ebenezer is living with a new wife called Edith in Letchworth, one of his new 'Garden Cities'.

His father, also called Ebenezer, originated from Harwich, Essex before moving to London. His occupation is listed as 'Confectioner/Biscuit Baker' and we can see that he is trading in London in 1856, using the London 1856 Post Office Directory.

Researching your family tree is one of the most popular hobbies. It is easy to see why with everybody looking for their own 'Who Do You Think You Are?' moment. Find yours today and embark on a personal adventure of discovery into the world of your ancestors.

If you are thinking of starting your own research why not register for one of our 14 day trials?