Nick Hewer - Who Do You Think You Are?

Nick's ancestors made the world a safe place, saving lives and influencing politics.

Nicholas Radbourn Hewer is a former public relations consultant who worked for a number of years for Lord Alan Sugar at his Amstrad organisation. He became friends with Lord Sugar during their long working relationship. He is known these days as an advisor to Lord Sugar on the UK version of the BBC television show 'The Apprentice' and as a host of Channel 4's gameshow 'Countdown'.

Nick Hewer was born in Swindon in 1944 to parents John Hewer and Patricia Jamison. Nick was the second eldest of 5 children. His brothers were David and Fergus and his 2 younger sisters were Stella and Annabelle.

Nick's parents came from quite different backgrounds, they met at Dublin University in the 1930s. Nick's father, John was studying to be a vet when he met Patricia and came from a veterinary background in his family. John and Patricia, settled in Swindon (John's home town) after their marriage. John David Radbourn Hewer, was born in Swindon in 1915 to parents John Hewer and Maud Elizabeth Horne.

John and Winifred Tuddenham were married in 1909 in Norfolk. John was also a vet by profession.

We can see from the Kelly's Directory for Wiltshire in 1923 (below) that John R Hewer listed as a practising Vet in Marlborough Road, Swindon. He is also listed as having an O.B.E. Both Nick's father and grandfather were highly acclaimed veterinary surgeons, highly regarded by the farmers and people whose animals they treated. 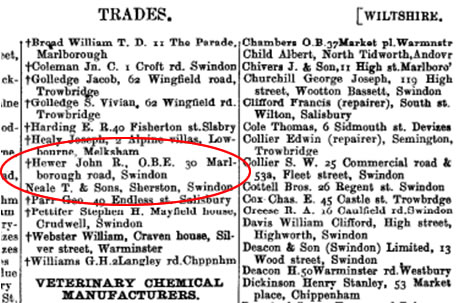 Here in the 1911 Census, we find John Radbourn Hewer living with Winifred in Wymondham in Norfolk. At this time they just had one young son, Thomas Radbourn Hewer, aged 8 months.

The Hewer family in the 1911 Census

Nick's maternal side starts in Ireland with his mother, Patricia Jamison. Patricia was born in Northern Ireland in a Catholic household. Her father was the former 'High Sheriff of Belfast' in the 1920s, a very prominent position for a Catholic in those days. He was also renowned for making anti-Sinn Fein speeches at a time when it was a very dangerous thing to do in Northern Ireland.

Oswald Jamieson in the Belfast 1901 Census 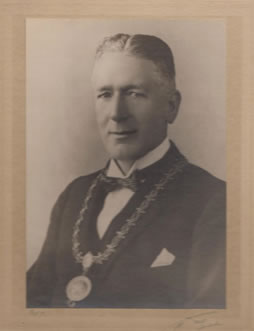 Oswald Jamison (shown on the right in his ceremonial attire as a High Sheriff) is found in the 1901 Belfast census , living in Great George's Street, Antrim with his mother Catherine and his siblings. He started and developed a painting and decorating business, eventually based in Belfast.

We can also see Oswald Jamison and his painting contractor business based in Bridge Street, Belfast in 1926. The same year Oswald is also listed as High Sheriff of Belfast. It is a true achievement to have one of the top political jobs in protestant dominated Belfast at the time, when political unrest was still rife throughout all Ireland. 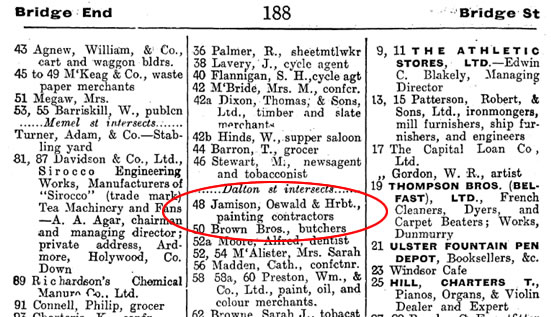 Oswald Jamieson in the Belfast 1926 Dirctory

Nick Hewer would undoubtedly approve of and admire his ancestor with both his business and diplomatic skills as he survived and thrived in a cauldron of stress and power struggles.