Did you have an ancestor who was a part-time soldier in the late 18th Century?

The militia armed forces of Britain were a vital part of homeland defences in the eighteenth century. The Militia Act of 1757 for England and Wales aimed to create a professional national military reserve. Records were kept for the men who were selected by ballot to serve for longer periods. Uniforms and weapons were provided, and the militias were brought together from time to time for training.

In a time of uncertainty it was felt necessary to have the security of a 'back-up' part-time force in case of invasion. Britain was often in military conflict with the French and Dutch and it was felt that a homeland security force was essential to guard home soil.

The militia were posted at several strategic locations, in particular the South Coast of England, Wales and Ireland. A number of camps were held at Brighton, where the militia regiments were reviewed by royalty - this is the origin of the song "Brighton Camp". The militia could not be forced to serve overseas, but it was seen as a vital training reserve for the army. Bounties were offered to men who opted to subsequently move from the militia to the regular army. 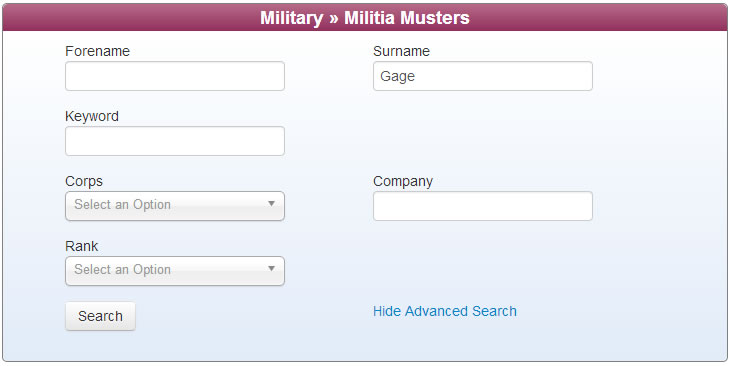 Search for your ancestors in the Militia records

In the colonies, the British set up the use of militias to protect their interests, as regular troops were often too far away to be used. This was particularly seen in North America in the French and Indian Wars before 1774. The loyal militia were often the primary 'English' force in the field.

Militias based in England were little used but still felt necessary. One action on 'home soil' was the Battle of Jersey in 1781, when the Militia of the Island of Jersey combined with regular British Army troops to repel a joint French and Dutch invasion force. The British commander, Major Francis Peirson, was killed as the battle reached its climax, but victory was gained and the invading forces defeated. The Battle of Jersey reinforced the perceived need for militia help, should an attack on home soil take place.

The Militia Act of 1757 offered all 'able-bodied' men to serve in the militia at home in order to counter any threat arising while the majority of the regular army was stationed abroad. Lists of eligible men in each parish were known as 'militia ballot lists' and from these, the men actually chosen appeared in the militia lists, of which over 58,000 now appear on TheGenealogist. 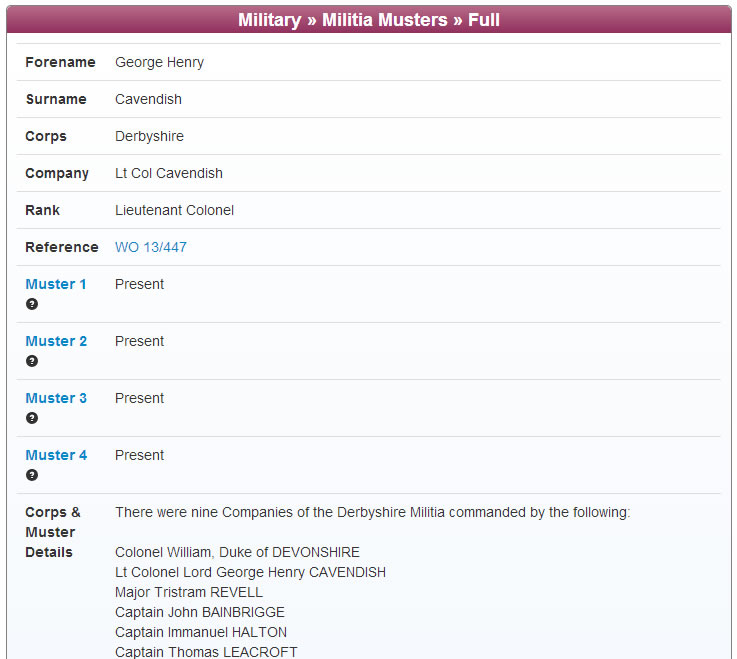 In an easy to search format, it's possible to search for an ancestor to see if they served in any of the militia regiments in the 1780s. Search by name and any relevant keyword, or use the advanced search to narrow it down to 'Corps' , 'Company' or the 'Rank' of the soldier.

To the left you can see a well-known 'militia man' of the time, George Henry Cavendish, a Whig politician who was nominated as a Colonel in the Derbyshire Militia in 1783.

He was the younger son of William Cavendish, 4th Duke of Devonshire, and spent a lifetime in politics, representing the town of Derby as a Member of Parliament. He was well renowned for his Whig principles and had a long career in the House of Commons and later House of Lords. His wealth and status guaranteed him a decent 'rank' in the Derbyshire Militia.

The militias were funded by Land Tax and received a 'marching tax' and expenses for attending meetings. As the militias were part-time they were called up or 'embodied' at times of war, such as the latter stages of the American War of Independence when France and Spain both declared war on Britain and there was a national threat to the country. In between wars, the militias were disbanded and were not required to meet. 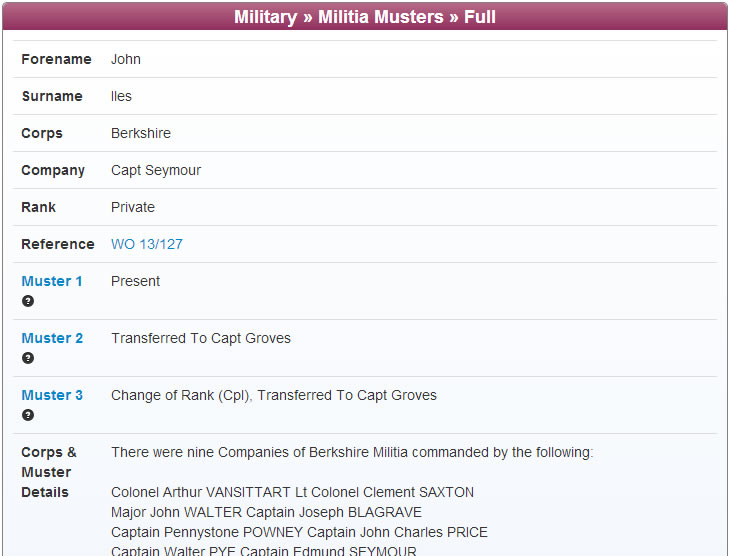 John Iles in the Militia records at TheGenealogist.co.uk

The records on TheGenealogist are a list of four significant 'musters' or organised meetings in which all the regiments of the militias are brought together and names are recorded. These records provide us with a snapshot of who was serving, with what regiment, and in some case the dates they were serving, when they were discharged, or if they died in service.

On the right we see the details of Private John Iles of the Berkshire Corps. In the first muster, he is serving in Captain Seymour's Company, in the second muster he has transferred to Captain Grove's Company and by the third muster he has received a promotion to the rank of Corporal in the Berkshire Militia.

Was your ancestor a part-time soldier who did their bit to defend their country in times of war or threat of invasion? Discover more with TheGenealogist Militia Records.