From ordinary folk to viscounts and magistrates, those who could not or would not pay their tithes found amongst the Irish Tithe Defaulter Records

Above: The Irish Anti Tithe Agitation The Affray at Carrickshock, 1831

Irish records can be problematic for family historians when they are found to be missing or destroyed. The 1831 Irish census is an example in case, almost completely destroyed in 1922. Researchers therefore have to turn to a set of records that can act as a substitute source. A useful stand-in for this missing census is the 1831 Tithe Defaulters database now online at TheGenealogist.

Tithes were a tax that was levied on all occupiers of agricultural land regardless of what their religious affiliation was. The Roman Catholic population of Ireland particularly resented paying these tithes to the Church of Ireland (the Established Church) when they often had to support their own priests as well. Coming to a head in the years 1831 to 1832, many people refused to pay the tithes asked of them and so began what is known as the 'Tithe War'.

With the lack of funds coming into the Church of Ireland parishes by this act of civil disobedience the Clergy Relief Fund was established in 1832 by the Recovery of Tithes (Ireland) Act, 1832. This act was aimed at helping the clergy affected by non-payment of tithes by awarding compensation. In order to get compensation the clergymen were required to make returns to the government of the names of people in their parish who had refused to pay the tithes.

Many of the defaulters named were ordinary folk such as labourers, farmers and widows who would most likely have been Roman Catholics and so not part of the congregation at their local Church of Ireland parish church. As an example we have found Ellen Fitzgerald, recorded as a Labourer in St Mary's Clonmel in Tipperary. The Affidavit explains that the Memorialist (the Anglican clergyman) had not taken proceedings for the recovery of the sum due. We can read that he had been "deterred from any law process by the ill effects which he has been informed have arisen in other parishes…" also it transpires that he feared for the life of his collector! 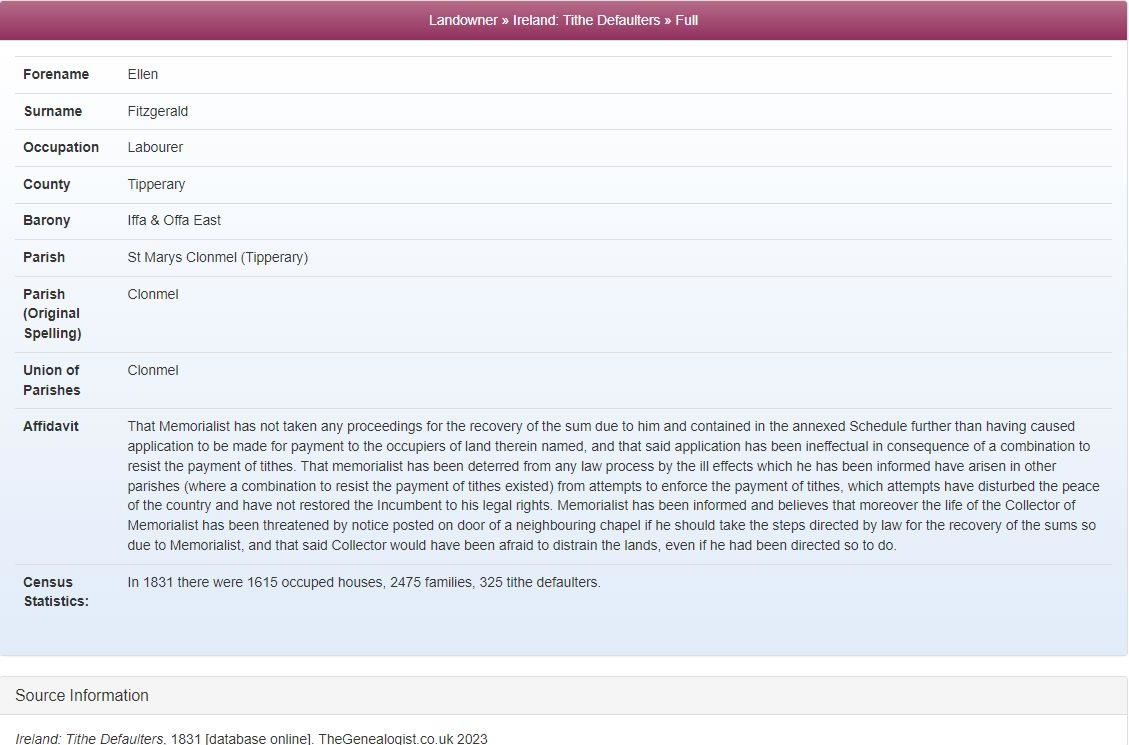 The Viscount and the Magistrate

Where the Tithe Defaulter returns survive they appear as schedules which record the names of approximately 29,000 people who were mostly from the Catholic country folk who defaulted on their tithes, but fascinatingly, these records also contain the names of some Lords and Knights! 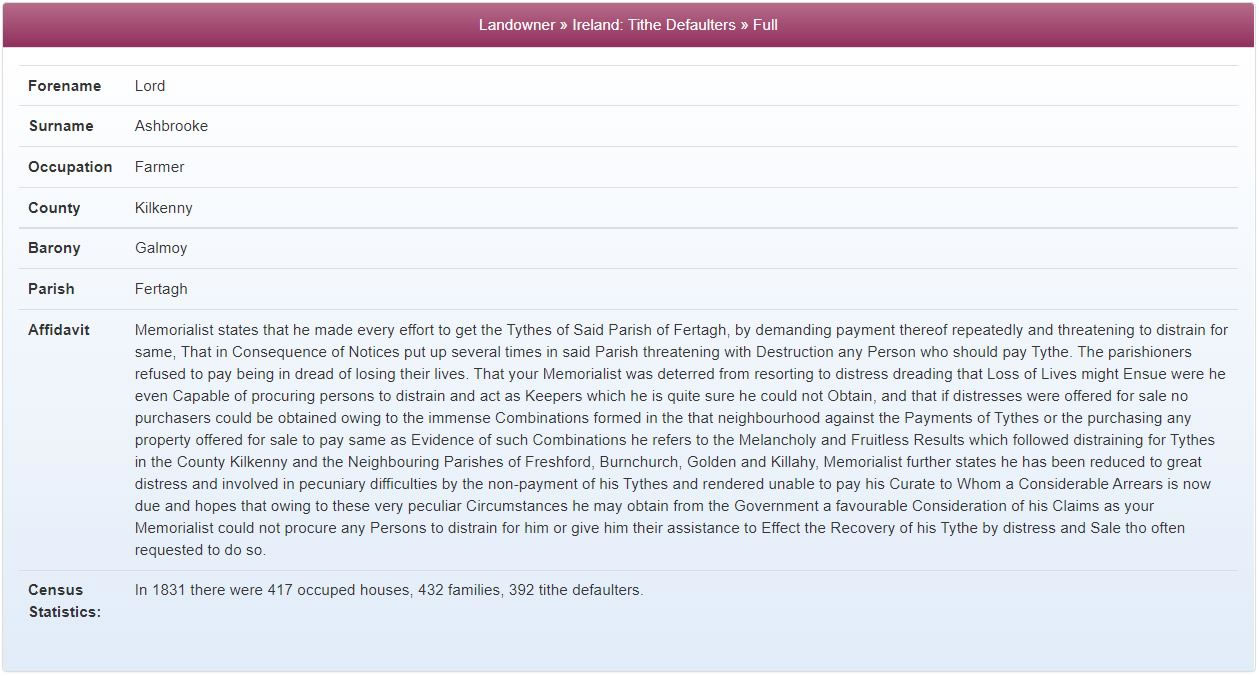 Our first example from the top of Irish society, as opposed to the poor, is Lord Ashbrook who farmed his estate at Kilkenny. From the dates we can determine that this would have been Henry Jeffrey Flower, the 4th Viscount Ashbrook, as he died in 1847. In that year he was succeeded by his son, also named the Hon Henry Jeffrey Flower.

An interesting sideline, discovered while investigating the line of succession of the Ashbrook family, was that while starting life with the same name as his father when he was born in 1806, in November 1827 the Hon Henry Jeffrey Flower officially changed his surname to Walker. This we can find in TheGenealogist's Change of Names records; though later in life he reverted back to his former name of Flower before he became the 5th Viscount Ashbrook.

Change of Name records on TheGenealogist 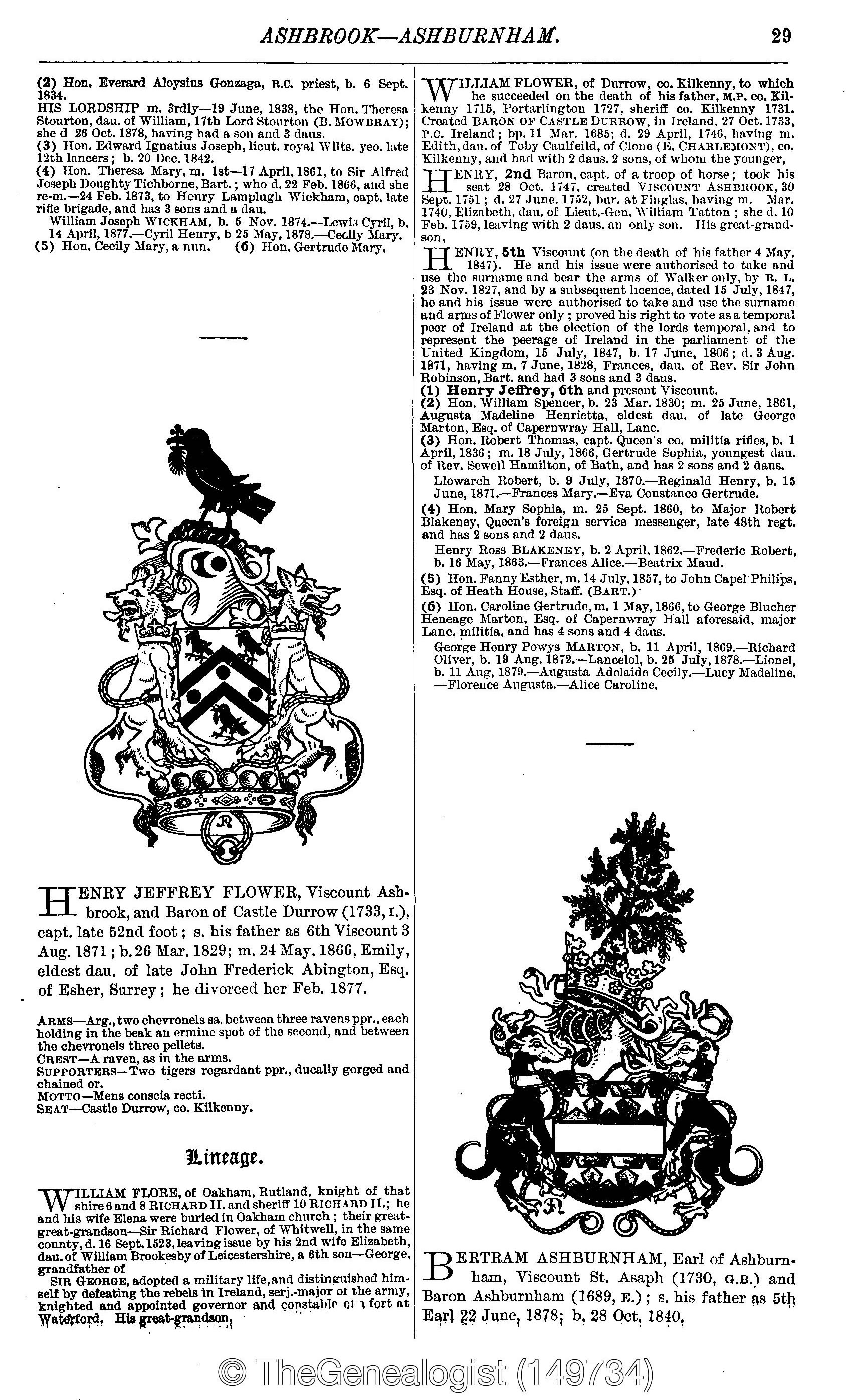 The Peerage, Baronetage and Knightage of the British Empire, 1880 from TheGenealogist's Peerage, Gentry & Royalty Records

We may have assumed that the aristocracy would have supported the law and the Established Church, so it comes as somewhat of a surprise that there are several other Peers of the Realm and various Knights who are named as Tithe Defaulters in these records alongside the ordinary folk. But the biggest eye-opener was to discover that there even appears a magistrate or three amongst the defaulters. Considering their position in society where they would have been essential for the dispensing of justice, that a Stipendiary Magistrate, such as Joseph Green Esq, had been in default is shocking. If we read the Affidavit attached to the list for the parish of Grangesilvia, one of several parishes in which he was a Tithe Defaulter, once more it tells of the threat to life of the Collector. In this case, John Lane, employed in collecting said tithes was warned by a note posted up in the parish that if he "did not quit said Parish to prepare his Coffin".

Being a Stipendiary Magistrate suggests that Joseph Green Esq was a professional lawyer in a salaried appointment and not simply a lay magistrate and would normally have been the authority before whom those who issued such threats would appear to face justice. Thus we must wonder why he didn't pay his tithes and so become one of the 275 defaulters out of 289 occupied houses noted in this one parish. 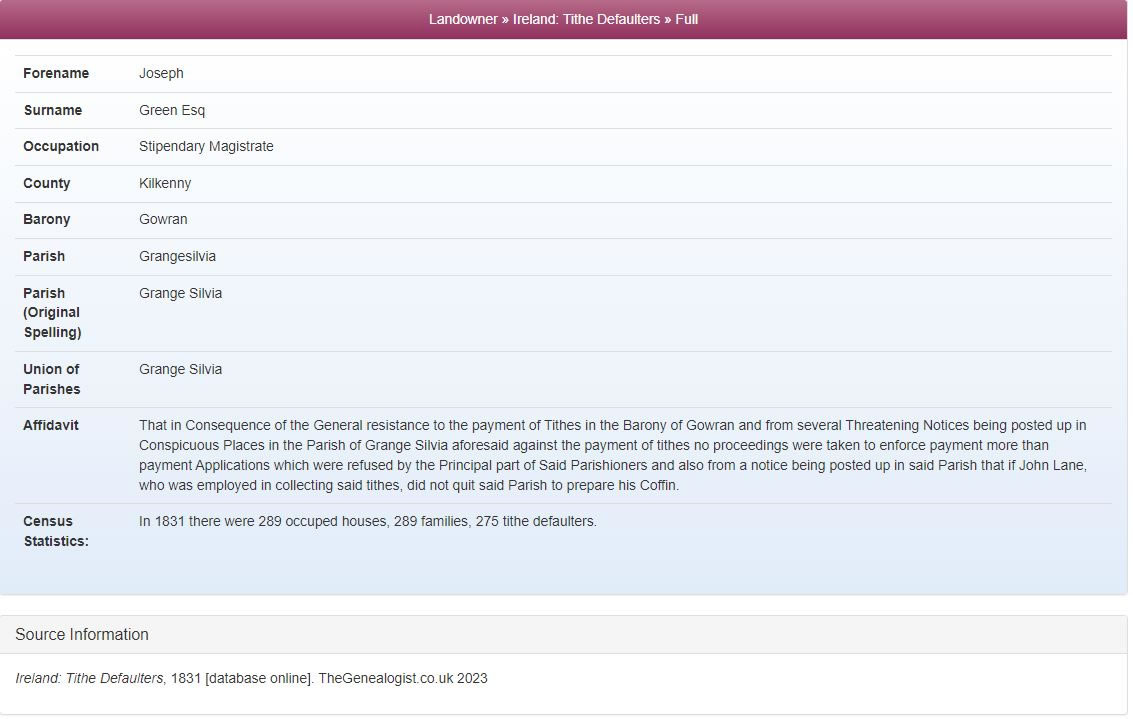 All in all there are 1,061 pages of names of Tithe Defaulters, and 29,027 names in the original records that form part of the archives of the Office of the Chief Secretary. The schedules of defaulters list the defaulter's name, address and the sum due. Some also list the defaulter's landholding and occupation and they are today held in the National Archives of Ireland in Dublin under reference CSO/OPMA/165/2/32–37. The Irish Tithe Defaulters schedules have been transcribed to be easily searchable by Diamond subscribers of TheGenealogist wanting to trace Irish ancestors from this period, a time before many people would have emigrated from Ireland in the Great Famine 1845-52.