From ships tied up in docks, where animals once grazed, to an Olympic Games venue, exhibitions and now a pop-up hospital – how our ancestors' land has changed...

The addition of colour tithe maps for Essex that can now be accessed via the Map Explorer™ allows the researcher to examine the seaboard and inland areas of this county from Victorian times to the present. Essex tithe records cover many places ranging from the North Sea coastline that is under constant attack from the sea at Walton-on-the-Naze, to the parts formally in Essex and which border onto the Thames in what is now Greater London.

As the Covid-19 pandemic builds and we are getting used to exceptional circumstances, we have heard the extraordinary news recently that ExCel, the exhibition centre on the Victoria Docks, is to become the temporary NHS Nightingale Hospital. This non-permanent hospital is to be staffed by NHS medics with the help of the British military and initially will provide about 500 beds equipped with ventilators and oxygen.

The MapExplorer™ on TheGenealogist allows us to compare and contrast the vista that our Victorian ancestors would have seen here with a modern satellite view. In the mid 1850s this particular area would have been Essex countryside with pasture and marshland stretching all the way down to the riverside where today the Thames barrier is situated.

From rural grazing land, this area in 1852 was on the cusp of huge upheaval at the time that it was subject to the Tithe survey. The need for supplying the Capital and the nation dictated that it was destined to be excavated to become docks to bring in goods from all over the world to London. In the year 2000 it saw change once again when the massive structure of the exhibition and conference centre was built over some of the previous docks. In 2012 ExCel became one of the venues for the Summer Olympics and so, at a time when those games in Japan are being postponed for a year because of coronavirus, it is not surprising that yet again this place is undergoing change. As ExCel becomes a temporary hospital in the fight against this unprecedented medical emergency we look back at this patch of onetime Essex. 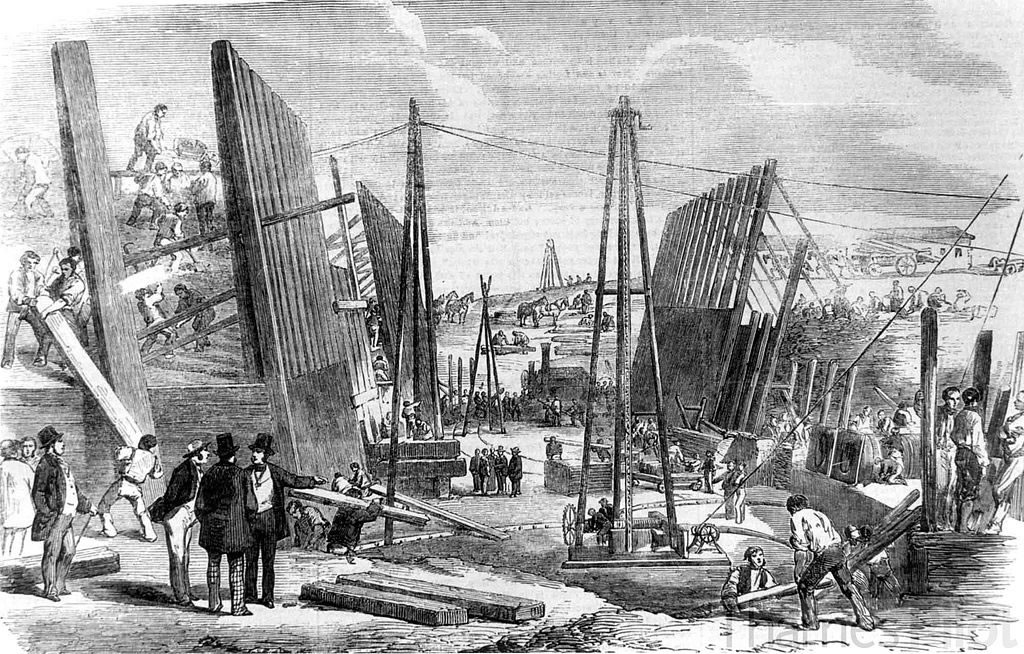 Building the Royal Victoria Docks 1854 from the Illustrated London News

Using the Map Explorer™ on TheGenealogist allows us to use several modern maps including a satellite map as the base layer and a 1:10560 Ordnance Survey Map from the 1893-1900s as our historical map to see how the landscape has changed. We are also able to view colour tithe maps, where available, georeferenced to the modern and historical maps that can give us more useful information on where an ancestor in the early Victorian era lived. Tithe apportionment books, which are linked to the plots on the Tithe Maps detail both owner and occupiers of land and so allow us to find ancestors from all levels of society.

To see how this area has changed over time using the dashboard to the left of the map display on the Map Explorer™ we select the Tithe recordset as the Top Layer and this then indicates a heatmap of plot clusters. Zooming in will then take us down to individual plots. One of the pins in the ExCel building, when clicked upon shows us that the landowner and occupier is the Victoria Dock Company.

Bing Hybrid on the Map Explorer™

The Modern Base Layer has a choice of maps from Open Street Maps to Bing Satellite and Hybrid maps. By making use of the opacity slider to fade in and out of the Tithe map and the Historic Map Layer, we are able to see that on the Ordnance Survey Map from the 1893-1900s the Royal Victoria Docks occupied the area that the modern map shows us to be the exhibition centre, and that half of the building covers what would have been dock wharfs with warehousing built on top.

Sliding the Record Set Top Layer opacity slider reveals where the ExCel building stands on Western Gateway. Plot number 711 is for the Victoria Dock Company, and by viewing the transcript we see that in 1852 it was a pasture field of over 2 acres and was one of seven that they had already gained possession of. The owners and occupiers of some of the neighbouring fields, however, were still to pass into the Dock Company's hands. What, we must wonder, would these farmers make of the total change that this area has undergone since their time? Where they would have been used to seeing animals grazing there now stands an enormous building about to be thrown into helping deal with the Covid-19 crisis on our hands.

Tithe Map from the Map Explorer™

The Royal Victoria Docks were opened in 1855 on the previously uninhabited area of the Plaistow Marshes that we have seen from the Tithe Maps had been pastures and marshes until that time. It was the first of the Royal Docks and the first London dock to be designed specifically to accommodate large steam ships. The docks were composed of a main dock and a basin to the west. There was an entrance to the Thames on the western side and the dock was deeply indented with four solid piers, each 152 m long by 43 m wide, on which were constructed two-storey warehouses as we can see in the historic OS map above. Other warehouses, granaries, shed and storage buildings surrounded the dock, which had a total of 3.6 km of quays. The docks themselves were only finally closed to commercial traffic in 1981. 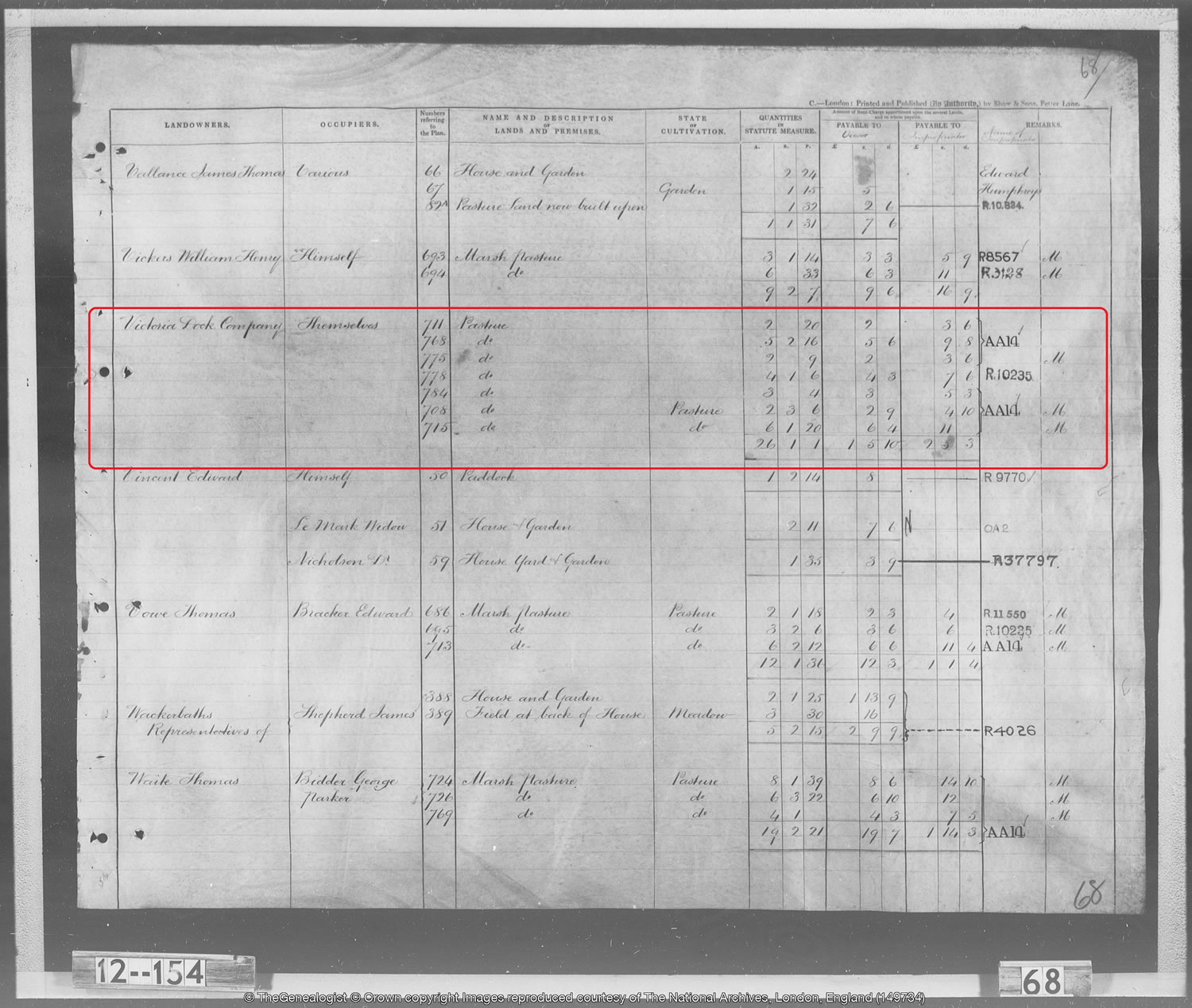 The addition of the colour tithe maps for Essex on the Map Explorer™ allows researchers to see how our ancestors' environment changed over time and we realise in this uncertain time that change continues today when what at the beginning of the month was an exhibition centre ends the month as an NHS hospital.