Rupert Chawner Brooke was born in 1887 in the Warwickshire town of Rugby, where his father was a schoolmaster at the famous Public School and his mother a clergyman's daughter. The latest release of Parish Records includes those of St Andrew's Church, Rugby, amongst a number of other parishes. It is in St Andrew's that we are able to find the baptism of the famous English Poet on 11th September 1887.

The records give us the name of his parents, the road in which they lived and his father's profession - all useful information to the family historian tracing their ancestors.

With a single click from the results we are able to discover the records for Brooke's siblings, who were also baptised in this church. While their parents, William and Mary Brooke, were not from Rugby, in the cases of parents who had also married in the church where their children were christened, the potential marriage link can be used to great effect to find their wedding. 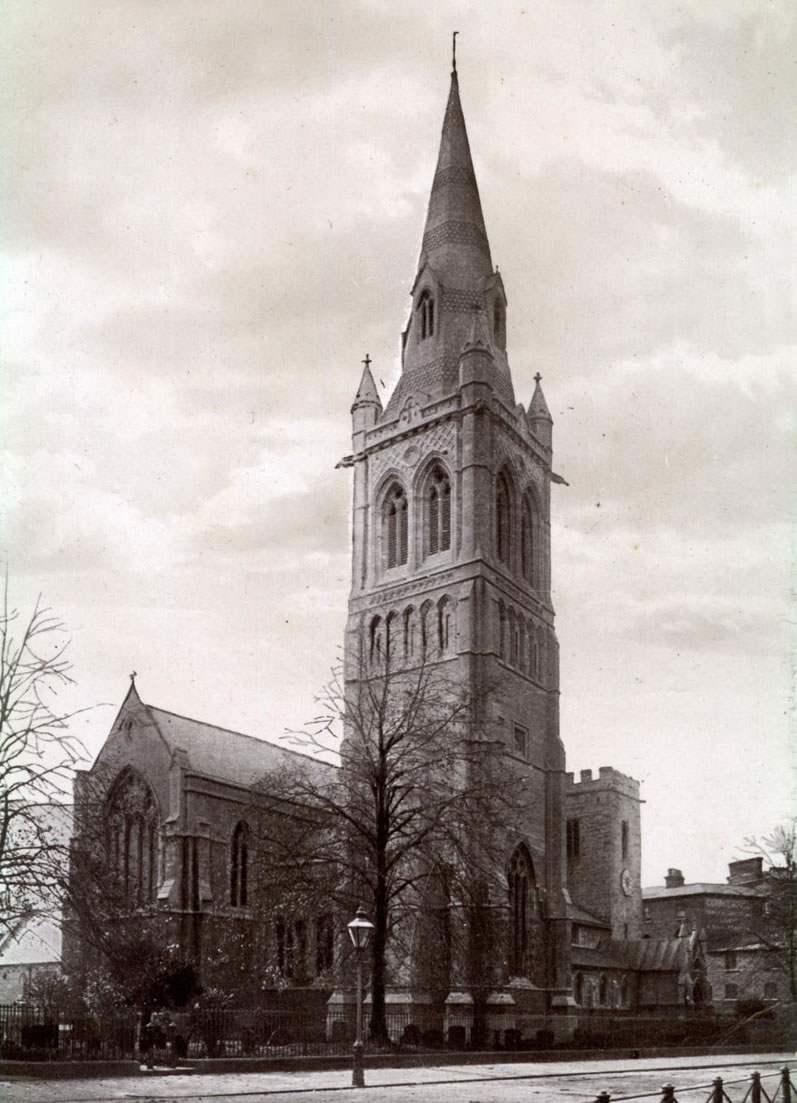 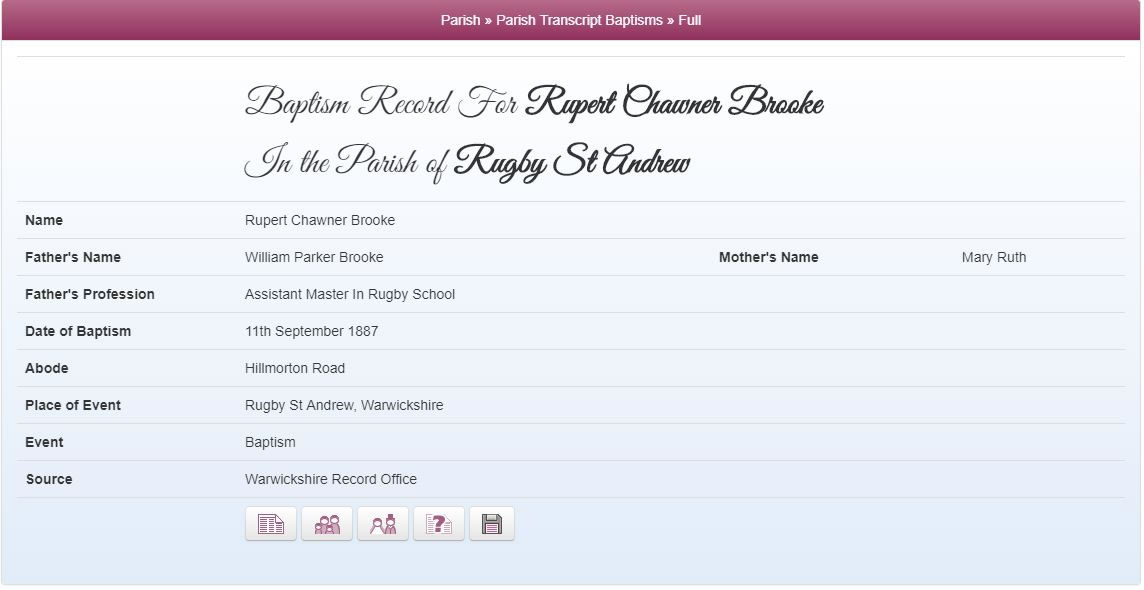 The baptism record transcription for Rupert Brooke also allows us to click through to view an original image, sourced from the Warwickshire Record Office, of the page from the church register. The future poet's entry is at the top of the right hand side page and is an incredibly neat and tidy example of a parish register book. In some cases we may be treated to extra information in the margin, but not in this particular case. 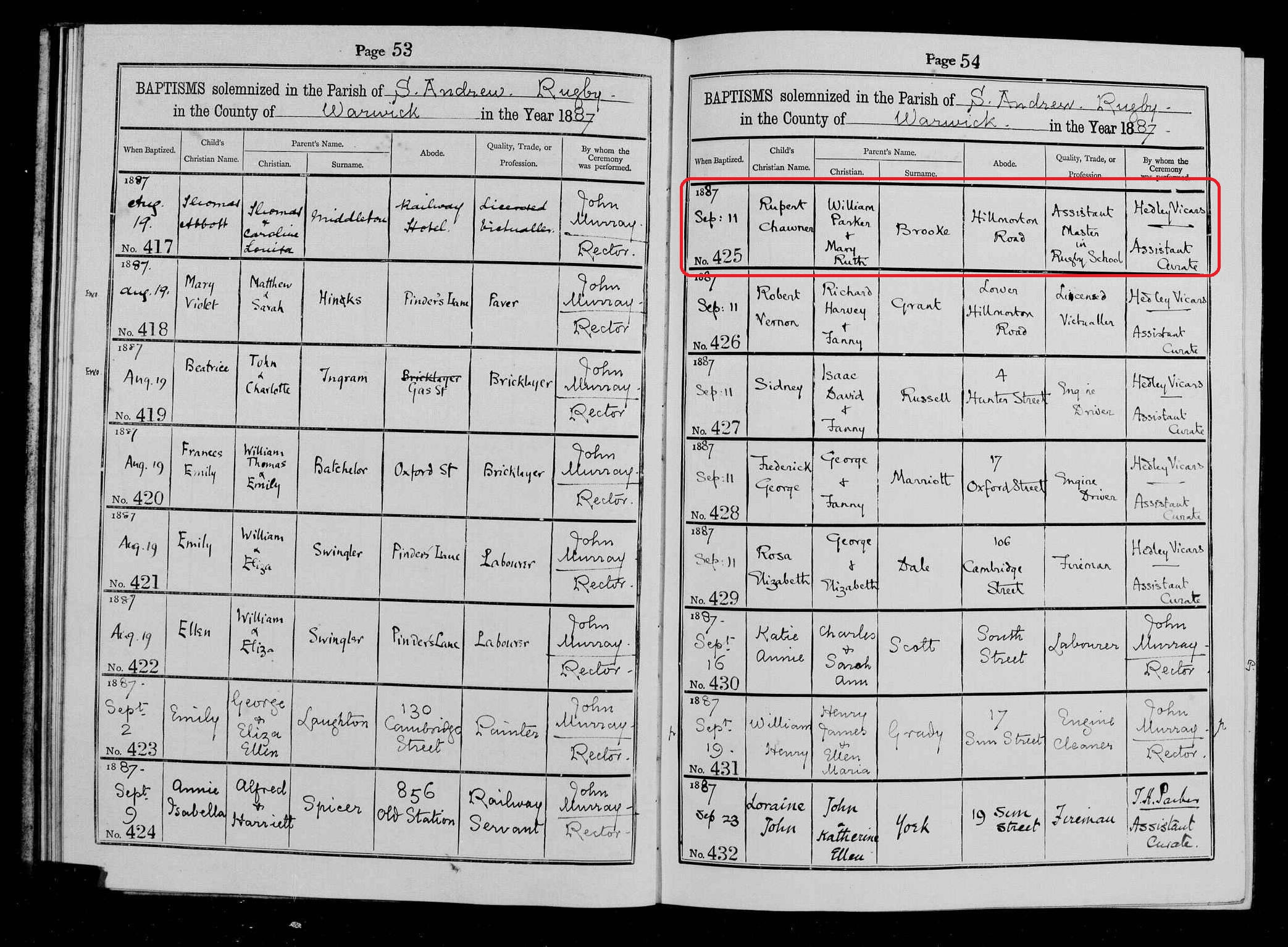 Image of the baptism record for Rupert Chawner Brooke

From the age of 14, Rupert Brooke attended the elite boarding school at which his father taught and was a housemaster. While at Rugby School, Brooke excelled as a pupil and took part in cricket and the game that was famously invented on its playing fields, rugby football.

After public school he went up to Cambridge where he read Classics for his degree. While Brooke's degree was considered a conventional course for a man of his class, the people he chose to associate with were far from ordinary. Rupert Brooke was attracted to both men and women, and so at Cambridge he joined gay discussion clubs as well as political and dramatic societies, while making friends with future members of the Bloomsbury Group. These men and women would become the leading literary and cultural lights in England in the years before and after WWI. From 1909-1912, Brooke lived near Cambridge in the village of Grantchester where he wrote a lot of pastoral poetry. This type of verse was built on both classical and English traditions and the appreciation of natural beauty. In 1911 his first collection of poetry was published.

One of his most famous poems, 'The Old Vicarage, Grantchester', was written while in Berlin before WW1, and uses both pastoral imagery and the classical traditions to contrast the bustling German city and the tranquil Cambridge village. With Europe's descent into war his life would be cruelly cut short at the age of 27, but as a result of a mosquito bite that went septic and not bullets or bombs. For one of the major war poets of the First World War he never saw enemy action, yet he became famous for the sonnet, "The Soldier," and its highly recognisable opening:

"If I should die, think only this of me:
That there's some corner of a foreign field
That is forever England."

Tracing Rupert Brooke further on TheGenealogist finds him recorded in the Military deaths. As a Temporary Sub-Lieutenant in the Royal Naval Division, an infantry division made up of Naval reservists not needed for sea service, Brooke died on a French Hospital Ship moored in a bay off the Greek island of Skyros in the Aegean Sea on his way to Gallipoli.

WW1 deaths from the Military Records on TheGenealogist

Searching within the Educational records on TheGenealogist discovers the entry for Rupert Brooke in the Rugby School Register IV for 1901 which, in a paragraph, sums up his life.

From Memorials and War Grave Books we can find Memorials of Rugbeians who fell in the Great War, which includes a striking image of the young man in his prime. 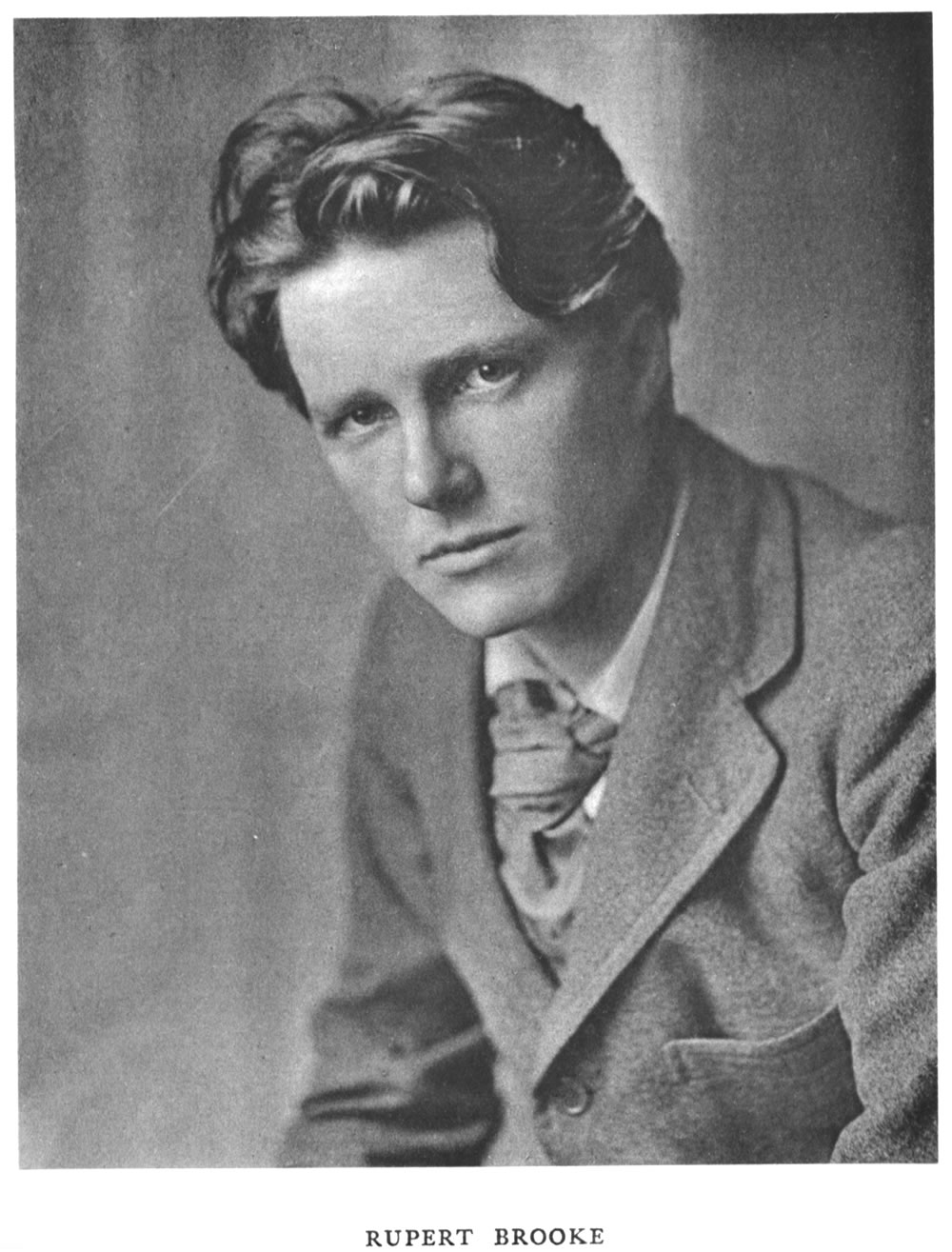 Memorials of Rugbeians who fell in the Great War

Parish records cover baptisms, marriages and burials, and for Brooke we have seen they helped to discover the beginning of his life. Searching for someone whose record is for the end of their life turns up the example of a one-time headmaster of Rugby school, Rev Thomas Arnold. On 12 June 1842 he had died suddenly of a heart attack "at the height of his powers" and just a day before his 47th birthday. As the man who turned the school's fortunes around he was given the honour of being interred in Rugby School's chapel. His burial is nonetheless included in the registers of St Andrew's, as the church nearest the school. 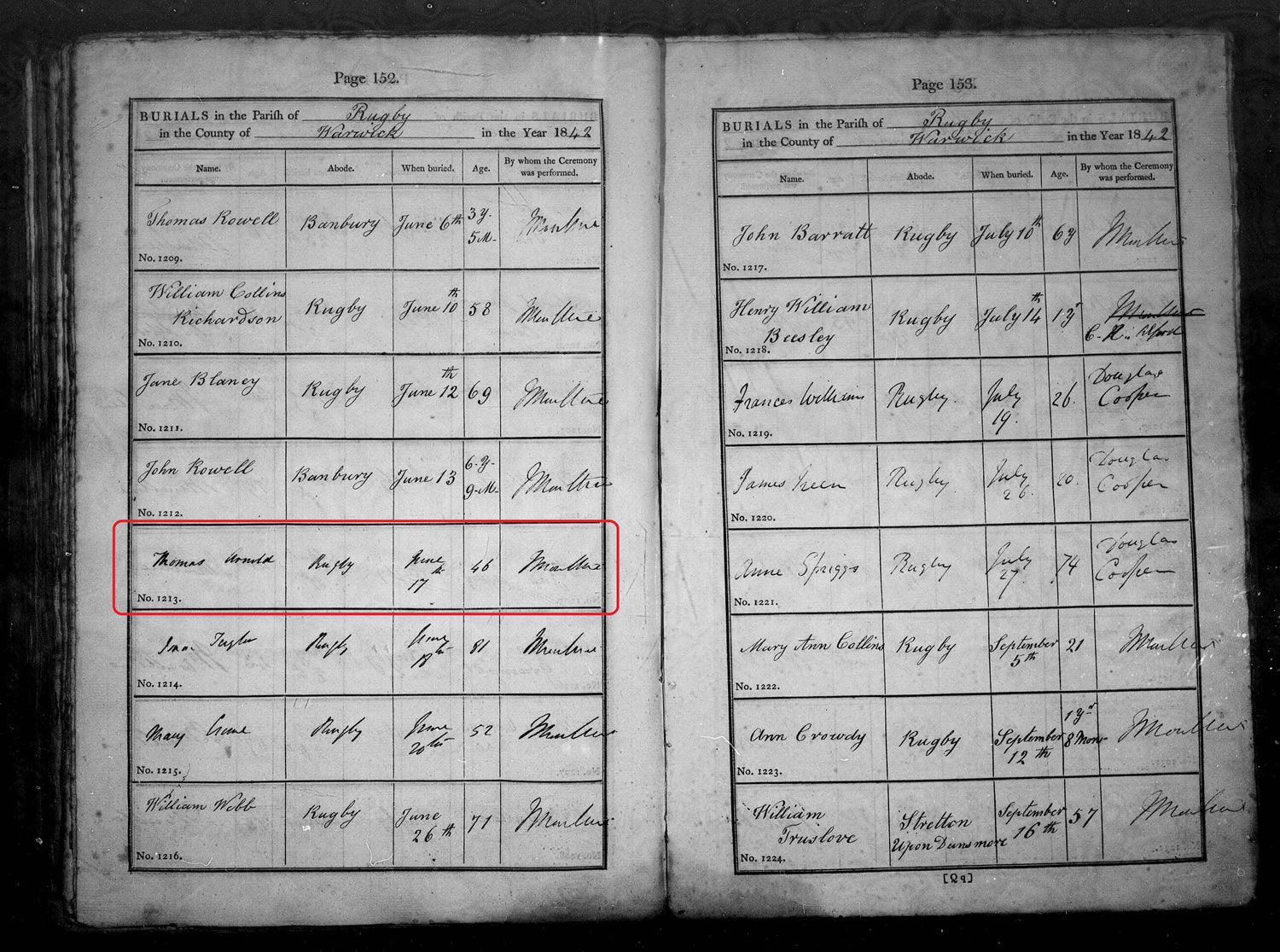