Nick Thorne adds another layer to the family history of a famous actress...

Coventry suffered tremendous loss in the Second World War. Almost everyone will be aware of the bombed out cathedral and its ruins preserved next to the new building. There is, however, a medieval church in Coventry called The Holy Trinity that survived the Blitz thanks to its vicar and two or three others who reputedly spent the night dowsing fires and even shoving incendiary bombs off the church's roof to prevent explosions damaging it further. With its very tall spire The Holy Trinity dates from the 12th century and is still in use today. It is one of the parishes that has been included in the latest batch of parish records that have been made available with images of the original pages on TheGenealogist and so enabled me to add an important event to a life story that I was investigating.

The Holy Trinity, Coventry was where a Welsh-born Lady's maid got married in November 1773. With her marriage she could give up her employment in service and return to the stage, an occupation that she loved and had an aptitude for. The bride would go on to become what some say was the greatest English tragic actress ever. Sarah Siddons was the eldest daughter of a theatrical family - her father, Roger Kemble, was the manager of a travelling company and her mother was an actress. Sarah was the firstborn of the thirteen strong Kemble brood, with five of her brothers and sisters also achieving some success on the stage. It was Sarah and John Kemble, her next eldest sibling, who were particularly feted by the eighteenth century public. However it may not have been that way if she had remained a servant and not wed her husband - without this marriage Sarah Siddons would not have become the best-known tragedienne of the 18th century, famous for her portrayal of Lady Macbeth and starring on stages across the country and at London's Drury Lane.

On 25th November 1773 in the parish registers of the Holy Trinity, Coventry, we can find that Sarah Kemble married William Siddons, a young actor who had earlier joined the family's theatrical company from Birmingham. The good-looking and able performer, William Siddons, could turn his skills to play a wide range of parts and he soon caught Sarah's eye. This, however, led to him being discharged from the players group by Sarah's father and mother. Their daughter was then despatched to be lady's maid to a Mrs Greatheed at Guy's Cliff in Warwickshire, but eventually she managed to get her parent's reluctant approval to the marriage. 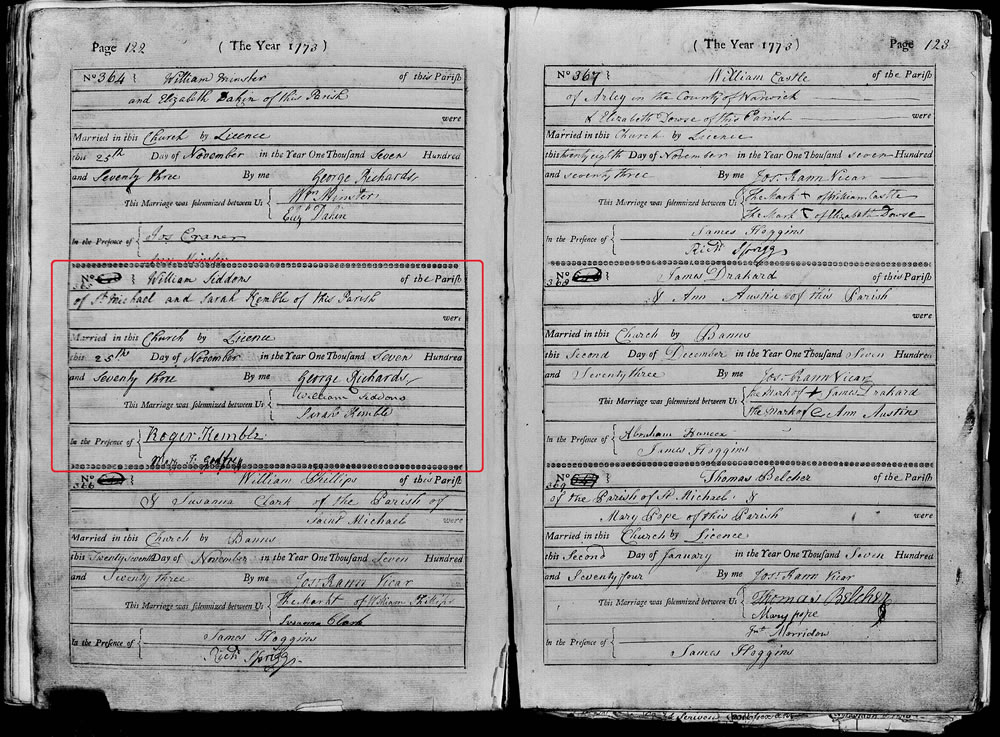 Sarah Siddons would go on to become an important actress, in TheGenealogist’s Occupational Records we can find entries for her in a number of books in this collection. This includes The Dictionary of National Biography Vol XVIII where we can read the amusing fact that she was 'born on 5 July 1755 at the Shoulder of Mutton public-house in Brecon.' It further explains that her father was a Roman Catholic and her mother a Protestant and so her brothers were brought up in her father's religion and she and her sisters as Protestants. On her baptism record in Brecon, Sarah's father's occupation had been given as commedian (sic), but presumably his theatrical abilities went beyond making the vicar laugh. 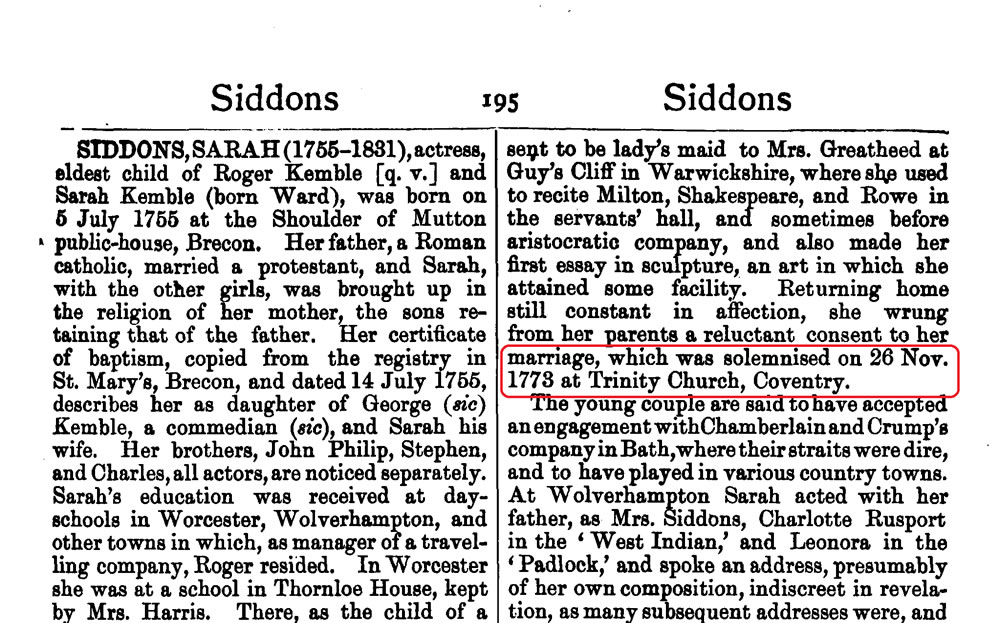 The Imperial Dictionary of Universal Biography Vol 16, also in these occupational records, reveals that she died at her house in Baker Street, London on 8th June 1831, while the Who's Who in the Theatre records tell us that she made her farewell benefit performance at Covent Garden in 1812. 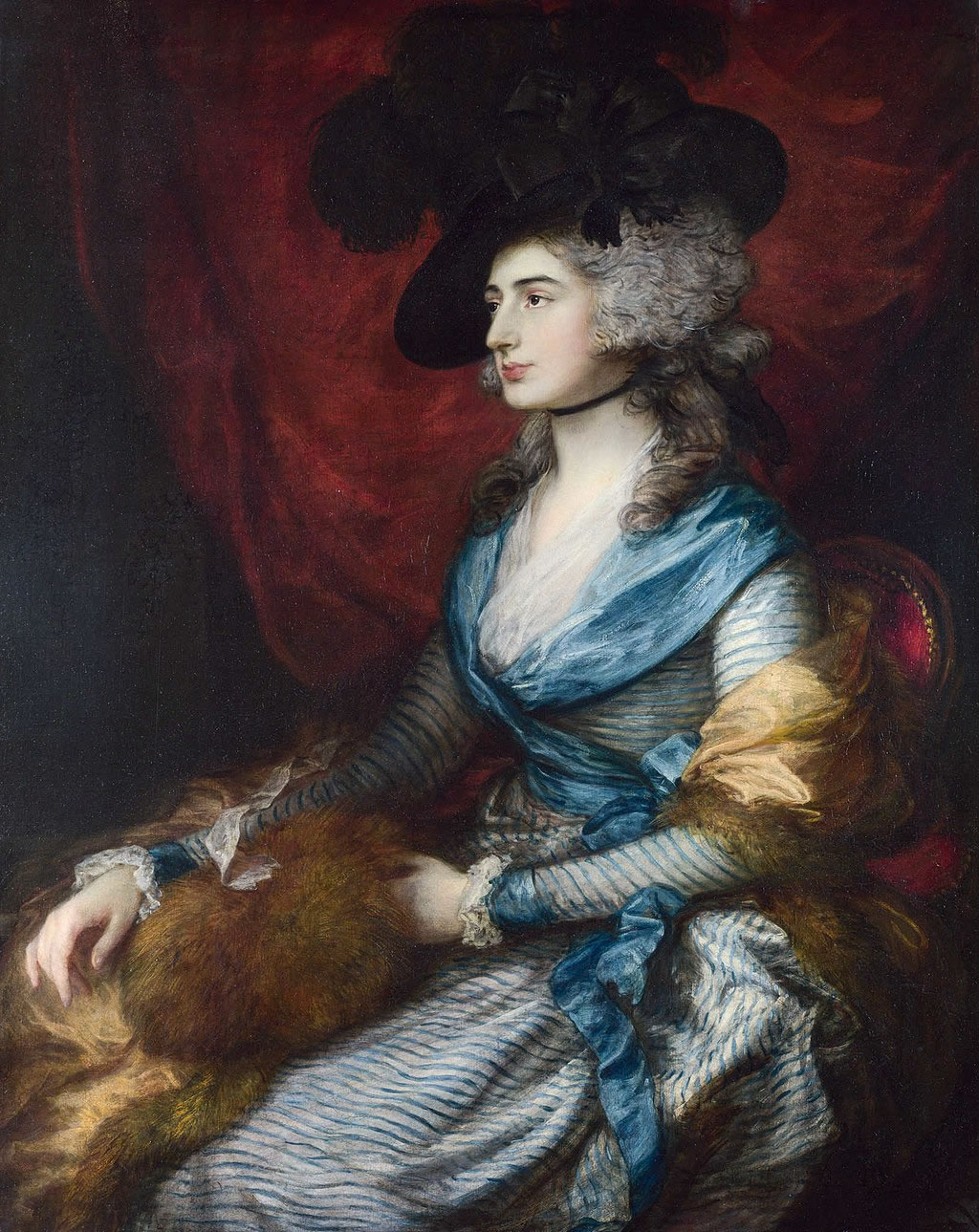 With her death at the age of 76, the will that she had written in 1815 was proved at the Prerogative Court of Canterbury (PCC) on 8th August 1831. An image of the PCC copy used for probate can be found in the Will records on TheGenealogist. 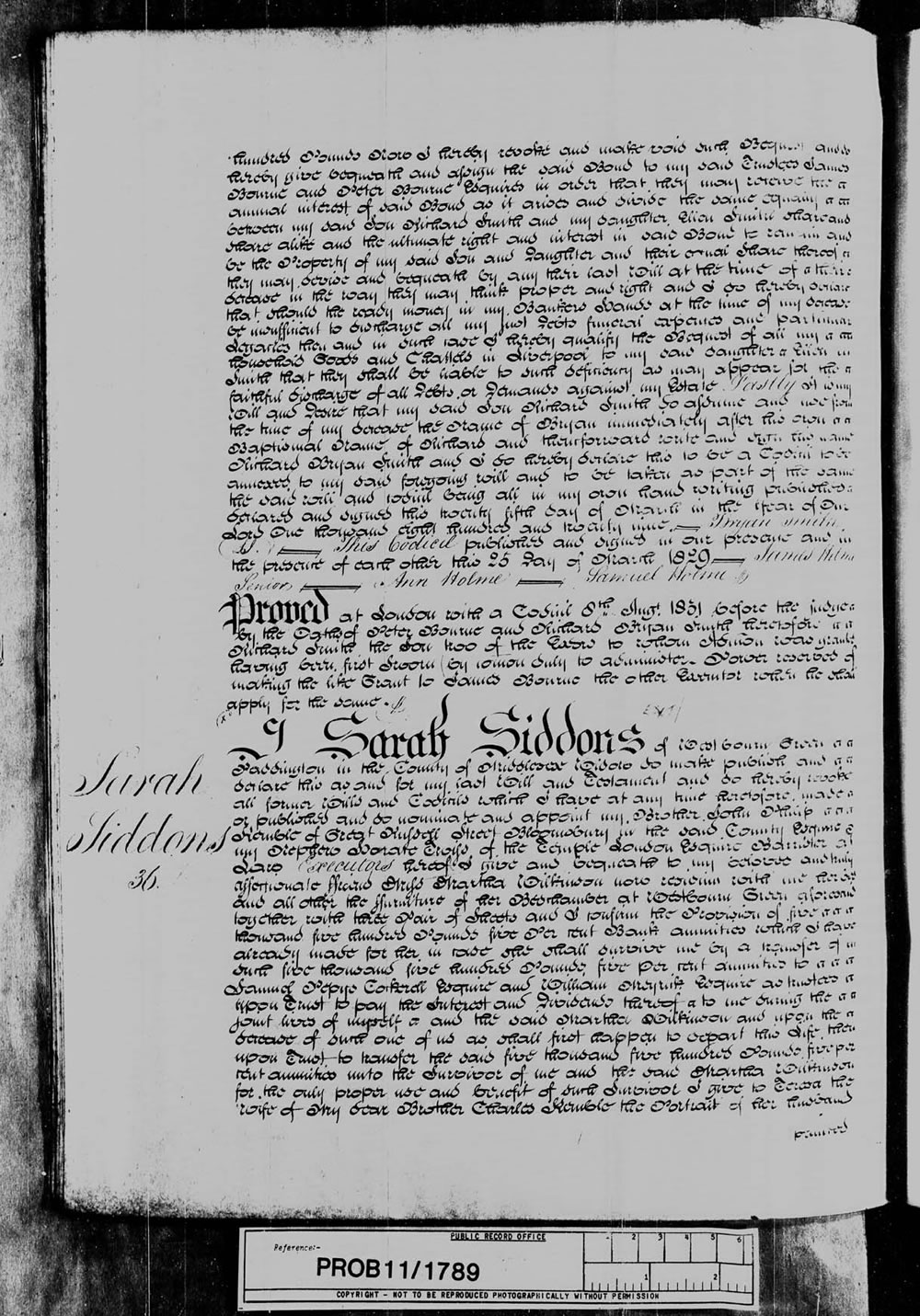 Prerogative Court of Canterbury Will of Sarah Siddons on TheGenealogist

Researching further we can see that eighteen years after her death Sarah Siddons was immortalized in marble by the sculptor Thomas Campbell and put in place at Westminster Abbey. By turning to The Illustrated London News for 6th October 1849 on TheGenealogist, we are able to see a sketch of his sculpture as it joined one of her illustrious brothers John Kemble that was already in the Abbey. The famous 18th century tragedienne is depicted in her statue playing the character for which she was best remembered - that of Lady Macbeth. She was also painted by several artists including Sir Joshua Reynolds and Thomas Gainsborough. 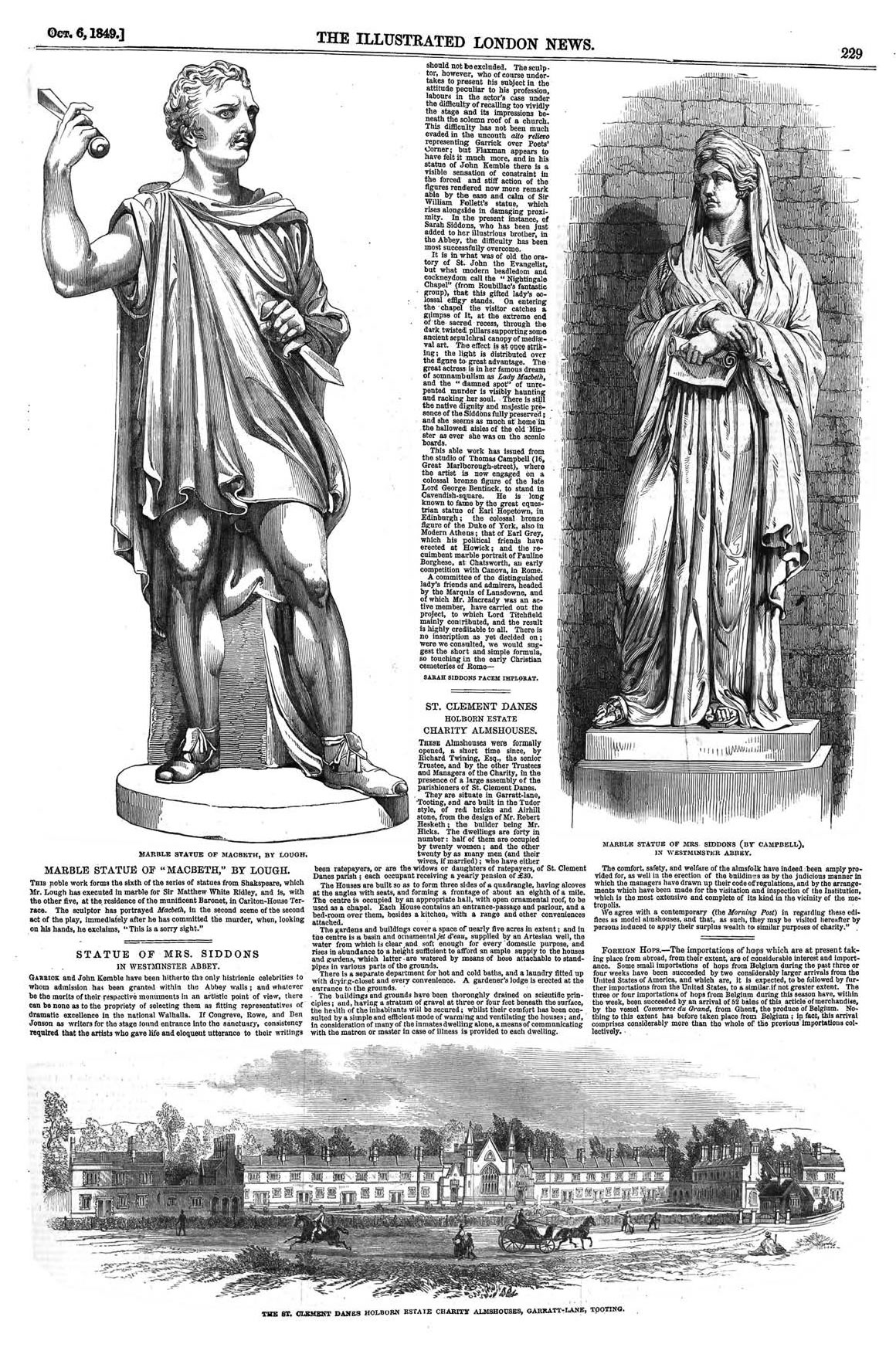 The addition of the second batch of Warwickshire Parish Records, in the ongoing project to bring Warwickshire Record Office records and their images to TheGenealogist, found the all important marriage record that played such a significant part in this lady's life, allowing her to return to the stage. So much did she thrive in this occupation that she was immortalised with a marble statue in Westminster Abbey and another likeness on Paddington Green. 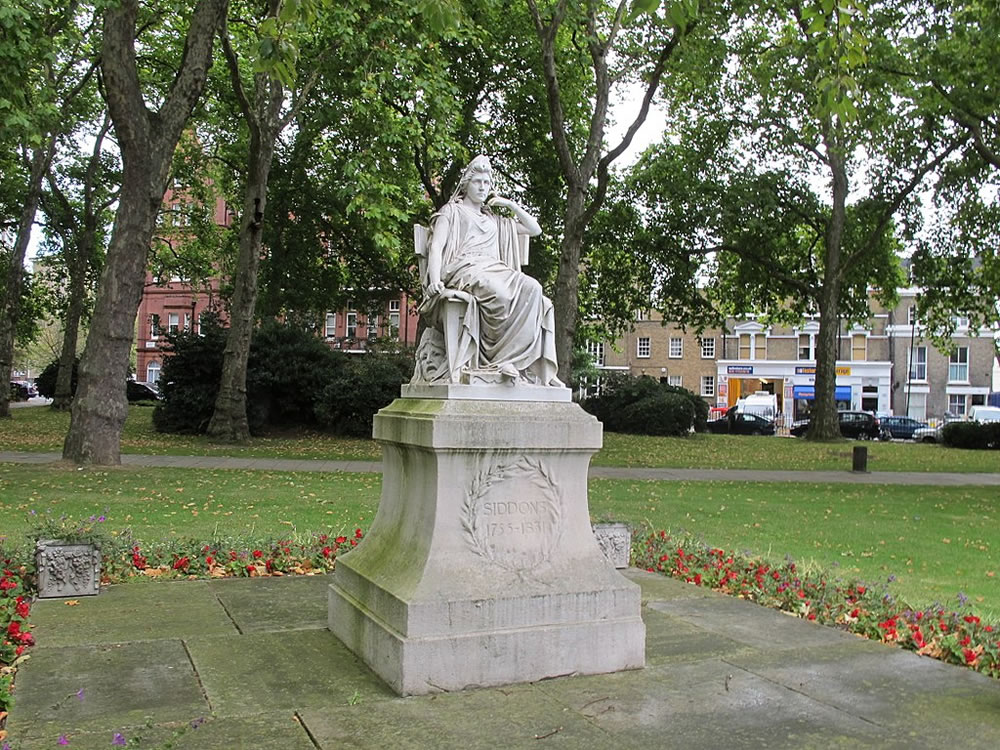