Providing Insights into Your Ancestor's Lives

I have been looking a little closer into the war exploits of my step-grandfather. I knew that he had joined the Royal Engineers Special Reserve Motor Cyclist Division as a despatch rider but, like many of his generation that fought in the First World War, he didn't talk much about his experiences. What I did know was that he had found it 'quite exciting' to ride his despatches from headquarters to the front and back on a motorbike. He never expanded on this and certainly didn't tell us stories about his escapades, nor what it was like to be a soldier on two wheels. 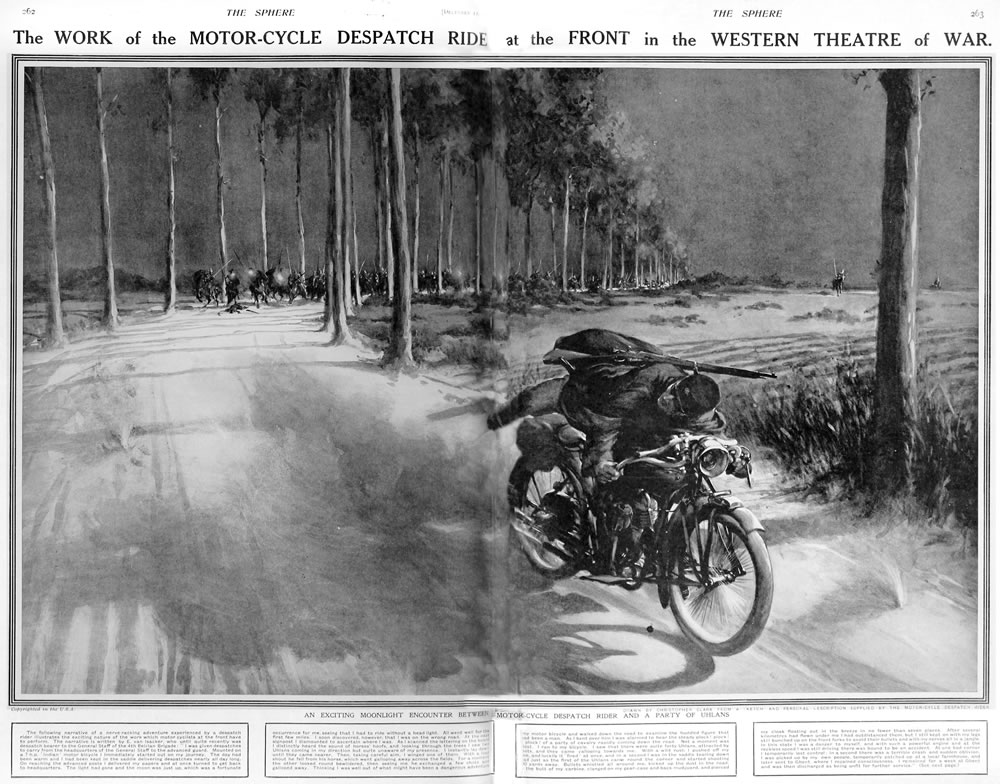 The Sphere, 12 December 1914, from TheGenealogist.co.uk

With the recent release of copies of The Sphere, on TheGenealogist, I was thus fascinated to come across the December 12 1914 edition of the publication. Here was an article about motor-cycle despatch riders from the early part of the war. This day's publication featured a double page evocative image of a motor-cycle despatch rider on his machine fleeing with the enemy on his tail. As I knew that my step-grandfather was in his late twenties at the time and a keen motorcycle rider I could imagine him reading pieces such as this and wanting to join up to the R.E. Motor Cyclists to 'do his bit'.

I know that Grandpa also served in the western theatre of war and so this image and the report that followed, resonated with me. I could now imagine him in similar situations as had been described and pictured in the newspaper. In this particular article from the newly released records, the rider telling his story suffers a whole lot of problems: 'On returning I take the wrong road and my machine gives trouble, and whilst repairing same I suddenly find myself surrounded by Uhlans.' This narrator is captured, has his hands bound behind his back and he feigns illness. When his guard goes to fetch a doctor the British Tommy escapes by rolling into a ditch. This episode makes me realise that when my step-grandfather said it was 'quite exciting' this was probably a bit of an understatement. Their duties were certainly not a simple ride in the countryside. 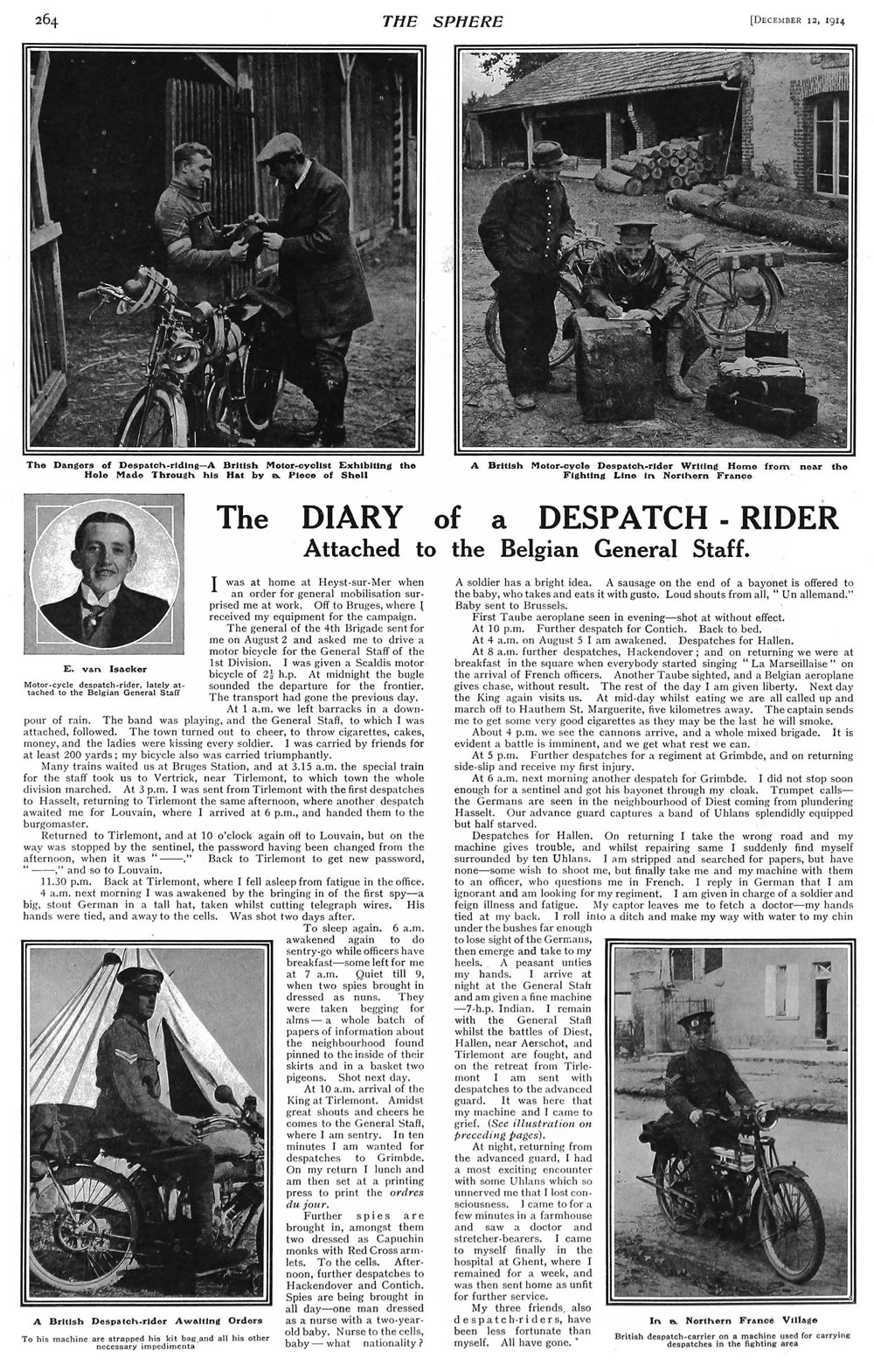 The Sphere, 12 December 1914, from TheGenealogist.co.uk

The British Army in World War I would often use Douglas or Triumph Motorcycles for despatch riding duties which only had between 2 and 5 hp engines. Some riders, however, brought their own machines along when they joined up. These motorbikes would have to be inspected by the military to make sure that they were suitable for the purpose; but in the early days, when many of the men were volunteers, this would have meant that this section of the Royal Engineers Signals would have been up and running quickly. In my step-grandfather's case, however, looking at his attestation papers I can see that this part had been scored through - indicating that he would have had to be issued with an army bike.

Later in the First World War Grandpa was wounded and by reading other articles, such as that published on the 9th January 1915 about the RAMC work at the front, I got an understanding for how injured men were transferred in motorised omnibuses and ambulances that were also subject to breakdowns of their own.

Resources such as The Sphere, The War Illustrated, The Great War, The Illustrated London News, plus the other historical newspapers and magazines already found on TheGenealogist are great for building a picture of situations that our ancestors may have found themselves in. In some cases we may be lucky enough to find an ancestor actually named in a report - but even when that doesn't happen we can find write-ups that provide us with an understanding of the wider conditions in which our ancestors worked, played or went to war in.

Another use that we can make of this resource is where we have an ancestor who was unfortunate enough to have lost their lives, while serving as an officer in the First World War. In many editions of The Sphere, Rolls of Honour were published. In these we are able to find a picture along with a few lines recording their loss. The Newspaper and Magazine collection is available to all Diamond subscribers of TheGenealogist.