His tenth great-grandfather was James I of England...

Kit Harington, the actor so well known for playing the part of Jon Snow in Game of Thrones, has exploded back onto our TV screens on Saturday nights playing the part of Gunpowder Plot conspirator Robert Catesby. The real life character Kit is playing is a distant relative of his, which makes for a captivating story. Bearing in mind that Robert Catesby was aiming to commit regicide by assassinating King James I, it is quite fascinating to see that on the other side of his family tree, Kit Harington can trace his line back up to the King.

The television series shown on the BBC is set in England in the year 1605. Elizabeth I is dead and King James VI of Scotland has taken the throne as King James I of England. With the country waging a war against the European power of Catholic Spain, English Catholics were subject to persecution. Any priests caught saying the Mass in England were punished with a horrible and violent death. After a period, when it looked like James would be more tolerant of the Catholics, his oppression of this section of his subjects worsened. Attempts were being made by disaffected Catholics on the new King's life - but all of them up to that date had failed. In Warwickshire the gentleman landowner Robert Catesby was brewing a new attack on the King and Parliament. The plot became the legend that even today is still remembered - the burning of Guy Fawkes on the top of fires and the letting off of fireworks across the country - despite the passing of more than 400 years since the treasonous scheme failed.

Fawkes is remembered today, but it was Catesby who was the mastermind behind the plan. After the plot failed he and the others behind the conspiracy made their escape, but were tracked down and Catesby's life was ended when a shot from the besiegers loyal to the king hit him.

Gunpowder began on Saturday 21 October on BBC One with the full series being made available on the BBC iPlayer immediately after the broadcast of episode one. 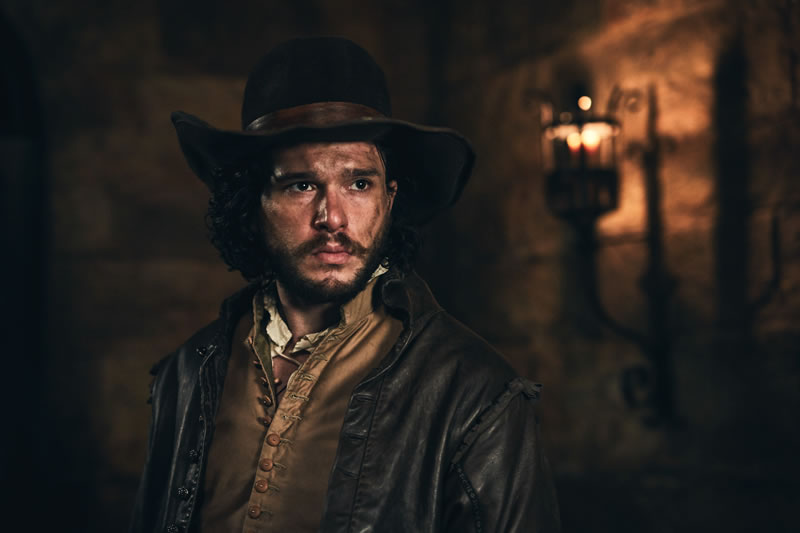 Lead actor and programme developer, Christopher Catesby Harington, who prefers the name Kit, was born on the 26th December 1986 in Acton, London. He is the son of David Richard Harington and Deborah Jane Catesby. A search of the birth records on TheGenealogist immediately finds us his registration in the first quarter of 1987 - presumably recorded by his parents after the Christmas holidays were out of the way and the registrar's office had reopened.

Birth of Christopher Catesby Harington recorded in Jan 1987 on TheGenealogist

To discover Kit Harington's gateway ancestor (a person that gives you a way into an aristocratic line) requires researchers to go back no more than one generation in Kit's case. His father inherited a baronetcy from his late brother and is now Sir David Harington, 15th Baronet of Ridlington. As such Kit Harington can trace his title back to his ancestor in 1611, Sir James Harington, who was a descendant of John Harington and one of the Barons summoned to Parliament by Edward II.

Kit's mother, Deborah Catesby was a onetime playwright and is the daughter of Maurice William Catesby M.C. and Philippa Evans. TheGenealogist birth and baptism records allow us to find that she was born in Hendon in the second quarter of 1947. Her family line of Catesby seems to trace back another ten generations to John Catesby of Sudbury in Suffolk. It appears from various reports online from Suffolk, that this lawyer and gentleman farmer was six times the Mayor of Sudbury. Born in 1642, he married 18 year old Elizabeth Jekyll in London as we can find from a marriage license transcript for the 16th May 1670 within the marriage records on TheGenealogist.

Marriage license record for John Catesby of Sudbury and Elizabeth Jekyll, 16 May 1670

When he died in 1705, his will was proved in the Prerogative Court of Canterbury and so we are able to read a copy of it by turning to the Wills on TheGenealogist. 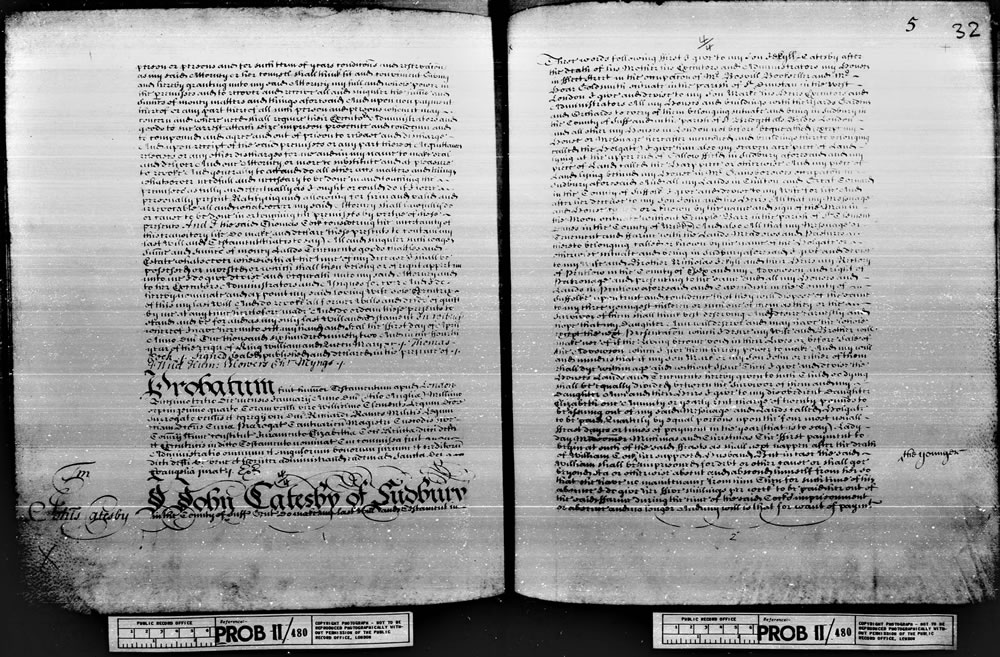 John Catesby of Sudbury's PCC will from 1705 on TheGenealogist

It is highly likely that all the Catesby families can trace their descent to the area around Catesby in Northamptonshire and this was the county where Robert Catesby, the ringleader of the gunpowder plot came from. The Biographical Dictionary of the English Catholics Vol 1 that can be found in TheGenealogist's Occupational records tells us that he was "of an ancient and opulent family, which had been settled for many generations at Ashby St. Legers, in Northamptonshire, and was also possessed of considerable property in Warwick." 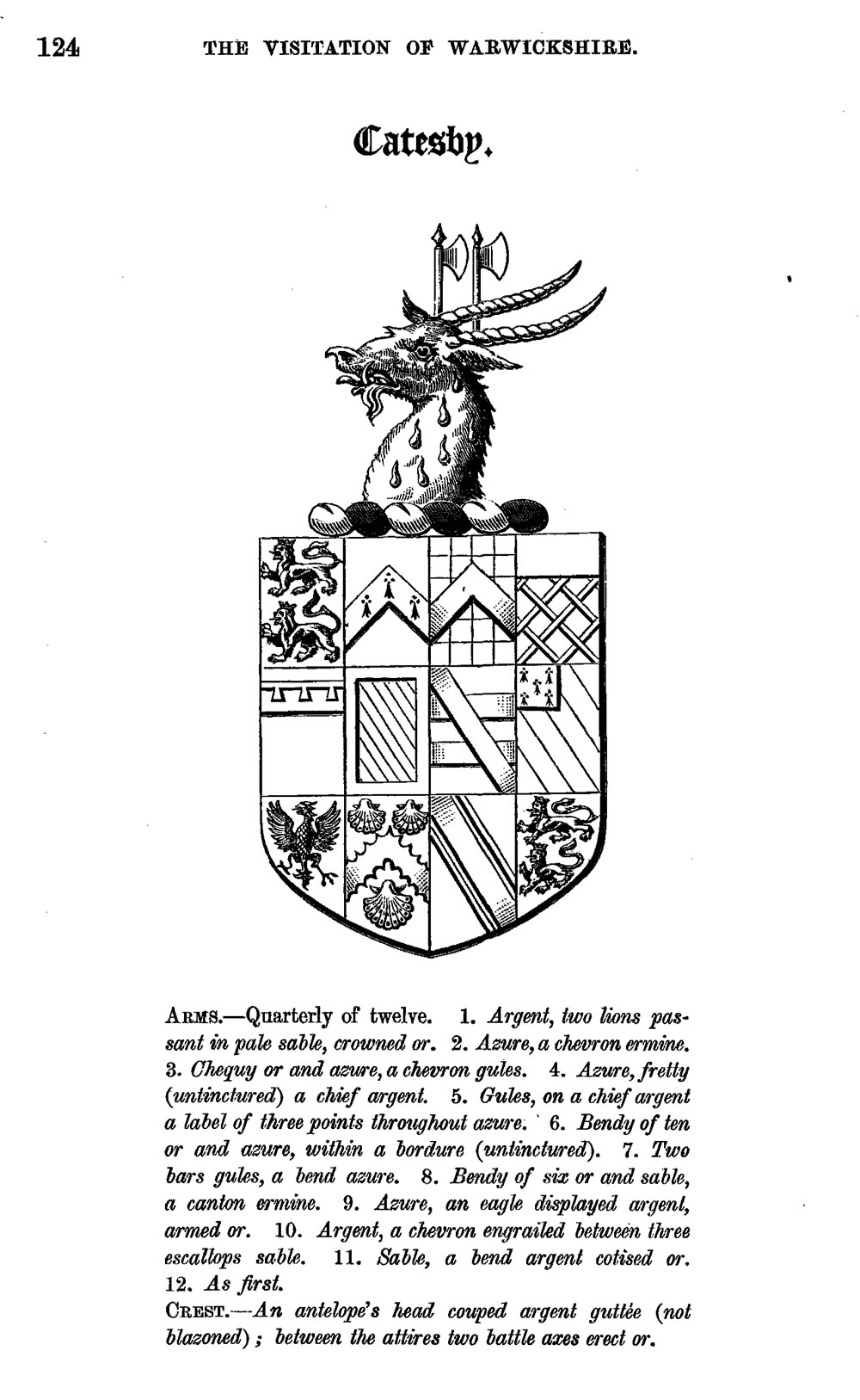 The Arms of the Catesby family in Warwickshire 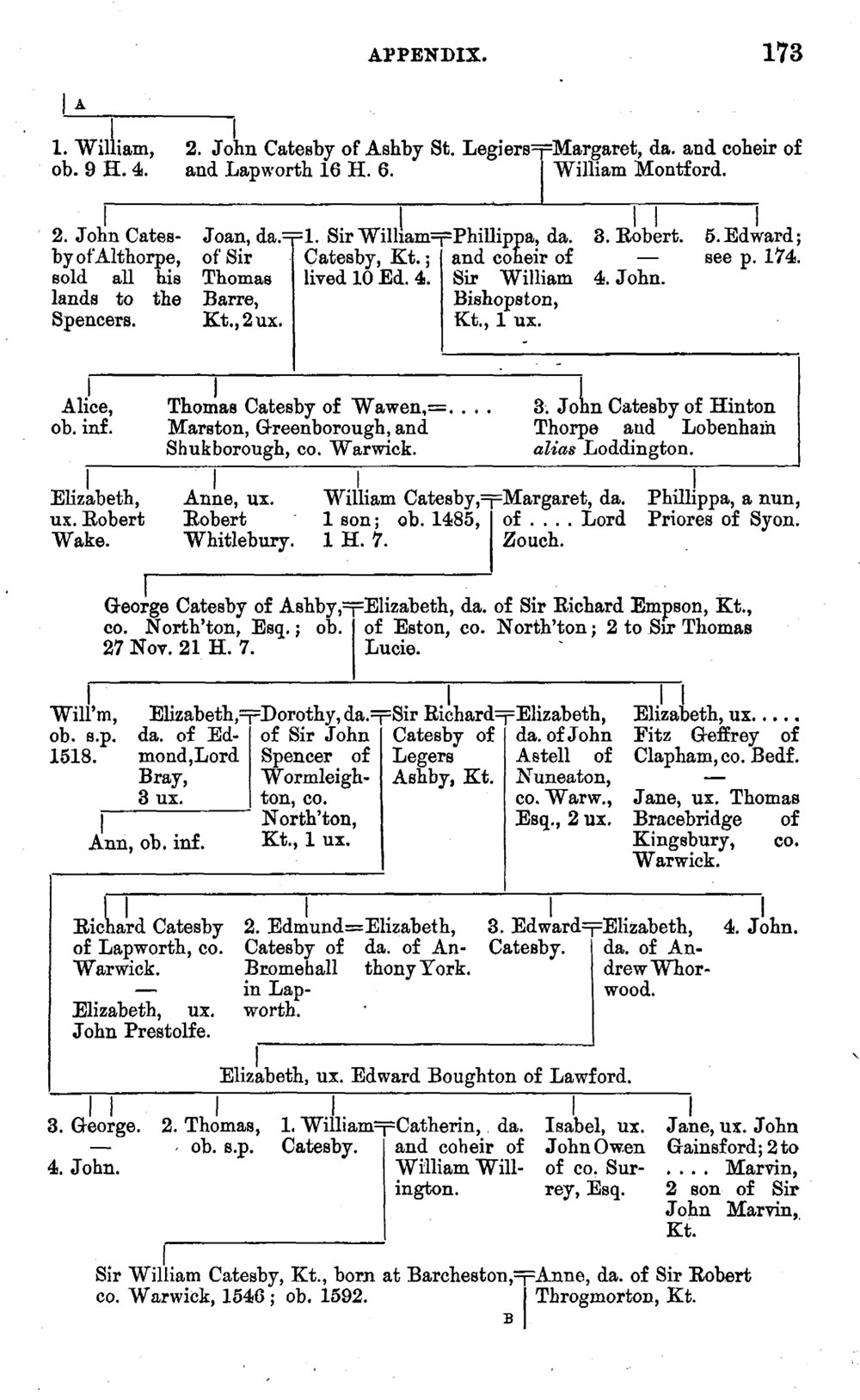 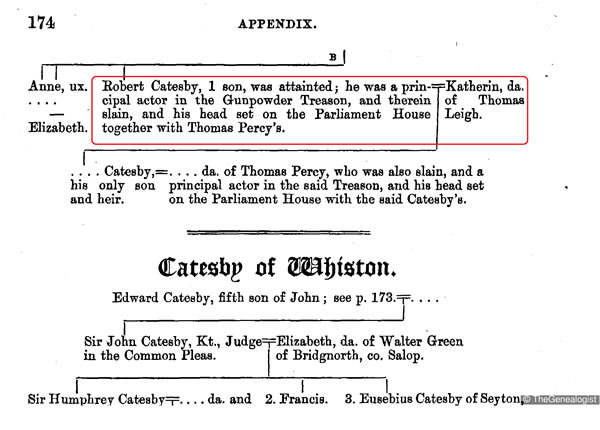 'His tenth great-grandfather was James I of England'

Researchers have been able to trace back his paternal line and by following male and female ancestors of his grandmother, Lavender Cecilia Denny, leads to one of Kit Harington's eighth great-grandfathers. This person was none other than King Charles II of England and the grandson of King James I - the very man whom Robert Catesby was so keen to kill. The actor is thus revealed to be related to both the king and his failed assassin.

We can also find Kit's paternal ancestors, the Baronets Harington of Ridlington, within the Peerage, Gentry & Royalty collection on TheGenealogist in The Roll of the Baronets 1929. This gives us a date of 29th June 1611 for its creation, within just six years of the Gunpowder plot's failure. 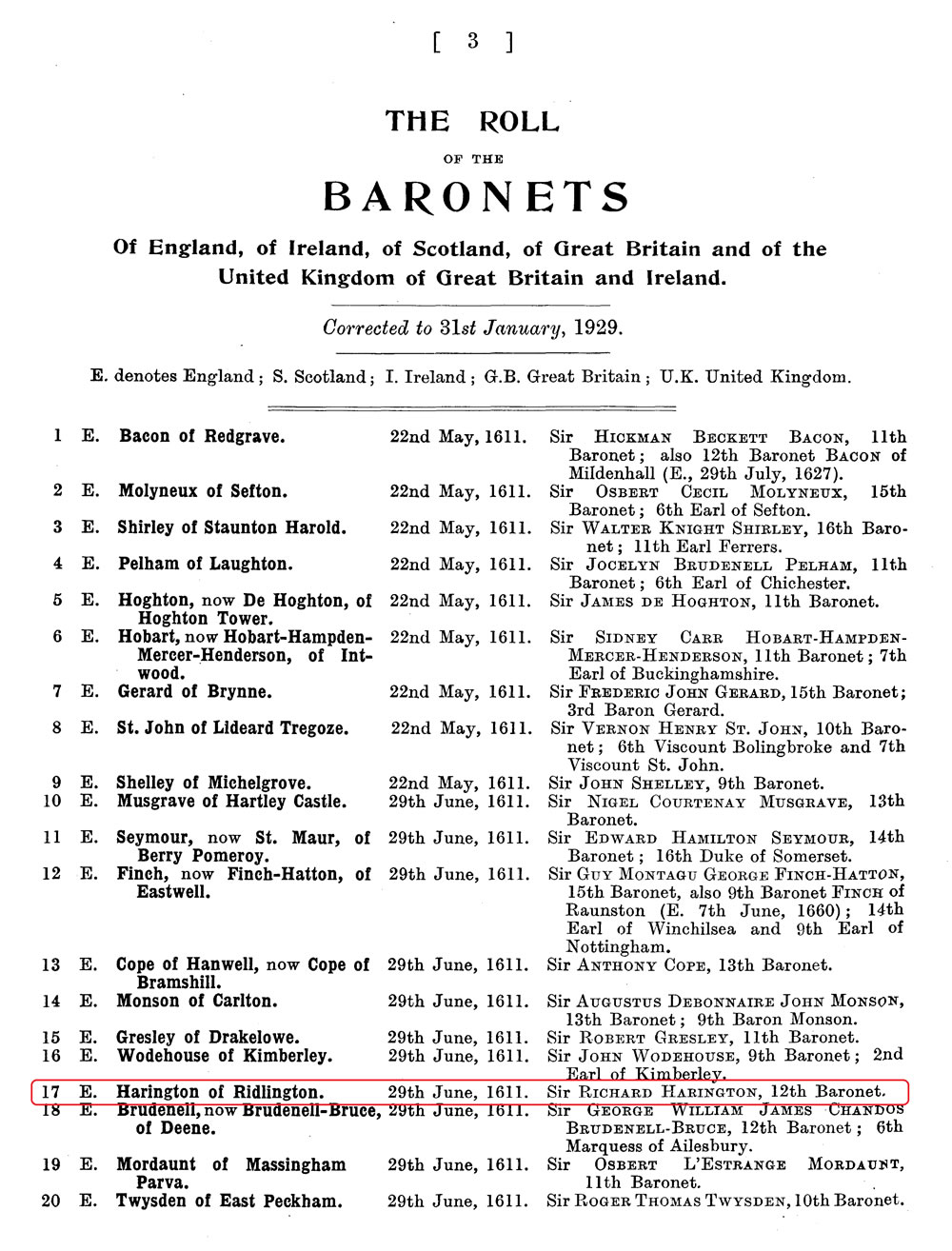 The Roll of the Baronets 1929 from TheGenealogist

From here we can search for the Haringtons of Ridlington in Burke's Peerage 1921 and also find their entry in the Visitations of Rutland. Burke's is able to tell us that the Haringtons are also an ancient family that once spelled their name Haverington and derived it from their estate, a lordship in Cumberland. The first person identified with their name was one Robert De Haverington, the son of Osulphus or Oswulf whose manor was Flemingby. 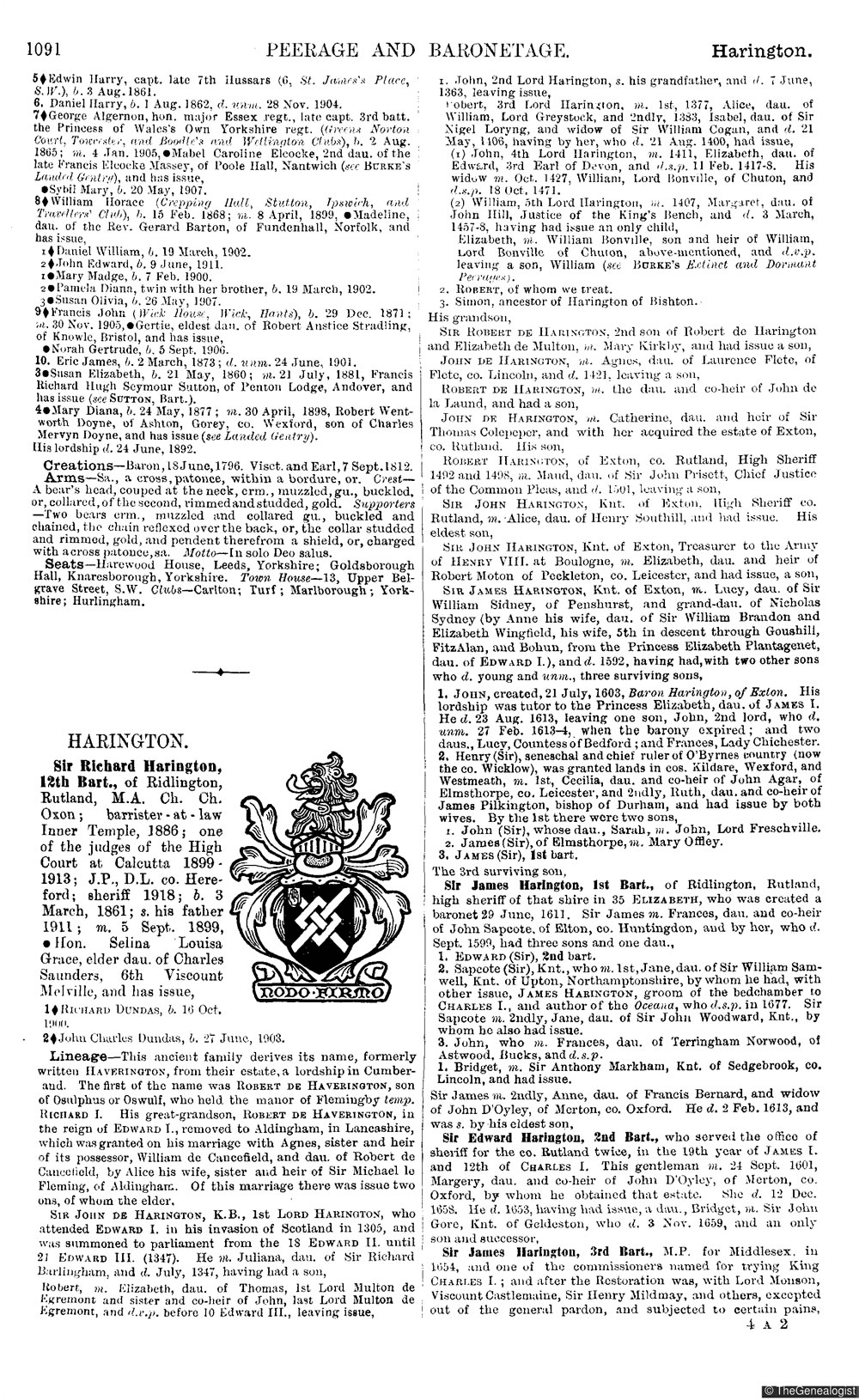 A closely related branch of the Haringtons were, however, another rung up the ladder of precedence at the time of the plot. Sir John Harington was the elder brother of James who would become the first Baronet of Ridlington. The elder sibling, Sir John, was made the 1st Baron of Exton in July 1603 at the coronation of King James. It is yet another twist, where two strands of Kit Harington's family cross paths when a Harington came face to face with the decapitated head of Catesby.

It was after the conspirators had been besieged at Holbeche House in Staffordshire that Catesby had been shot and mortally wounded. He had managed to crawl inside the house to die whilst the survivors were rounded up and captured. At first the dead were buried near Holbeche, but on the orders of the Earl of Northampton, the bodies of Catesby and Percy were then exhumed and decapitated. The severed heads were then sent to London to be displayed on "the side of the Parliament House" for all to see. While on their way, it is said that John Harington decided to study the heads. He would have been 13 at this time and it is reported that he later reflected: "more terrible countenances were never looked upon". John Harington would then, in 1614 at age 21, inherit his father's debts and title as the 2nd Baron Harington of Exton in 1614. His tenure was short lived as he himself would die just six months later.

The narrative of the Catesbys interlinking with the Haringtons is a fascinating story on its own; but that a famous actor should be the developer and lead actor to bring the story of his distant relative to the small screen, is a great twist.