Sheridan Smith - Who Do You Think You Are?

Musical talent through the generations...

BAFTA Award winning actress,singer and dancer. This star of stage and screen discovers her musical talents have continued through the generations.

Sheridan Smith was born in Epworth, Lincolnshire in 1981 to parents Colin Smith and Marilyn Carroll. Colin and Marilyn were married in Swansea in 1965.

Colin and Marilyn also performed together as a 'Country and Western' musical duo called 'The Daltons'. Studying music and dance from an early age, Sheridan later performed with her parents in their musical performances. 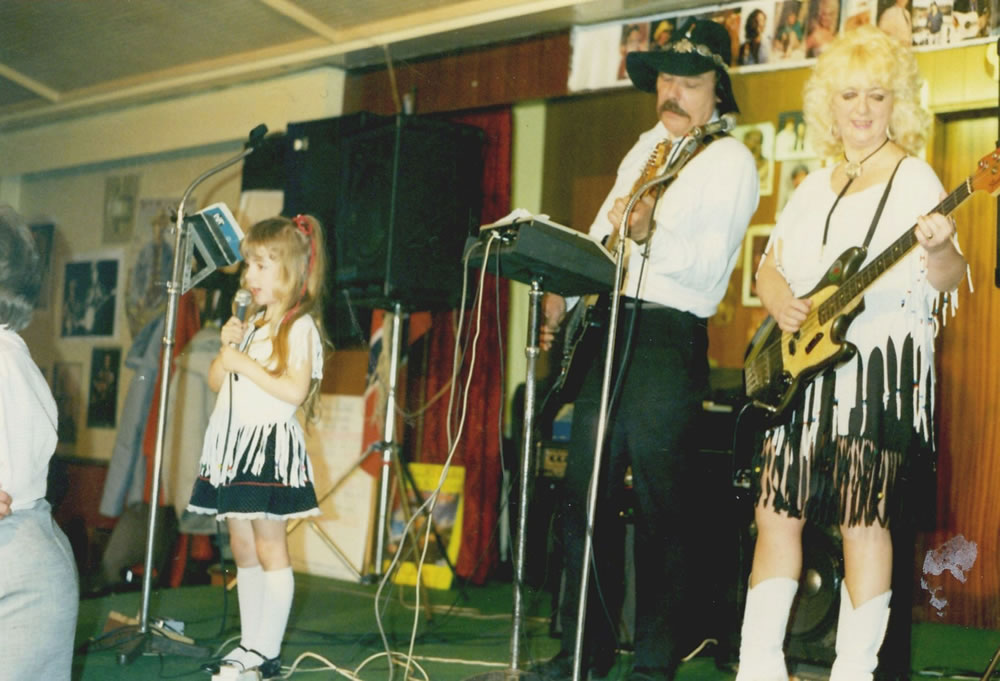 Sheridan performing with her parents as a child

Colin Smith, Sheridan's father was born in 1936 in Sheffield as can be found in the copy of his birth record found on TheGenealogist. His parents were Walter Smith and Hettie Doubleday (also known as Ettie). The Doubleday family had a history of music and entertaining in Yorkshire, a talent Sheridan and her parents have continued. Sheridan recalled the exceptional piano playing talents of her grandmother, Ettie, and wondered if this ran through the Doubleday ancestry. Walter and Hettie were married in 1932 in Sheffield as can be seen in a copy of their marriage record.

Hettie Doubleday was the daughter of William Collins Doubleday and Rose Adkins. They were married in 1906 and the family can be seen in the 1911 census. A young family, living at 17 Poplar Grove, Florence Road, Smethwick, William worked as a fitter in Sheffield as can be seen on their census return. Hettie's older brother, Benjamin can be seen as their only child at the time. 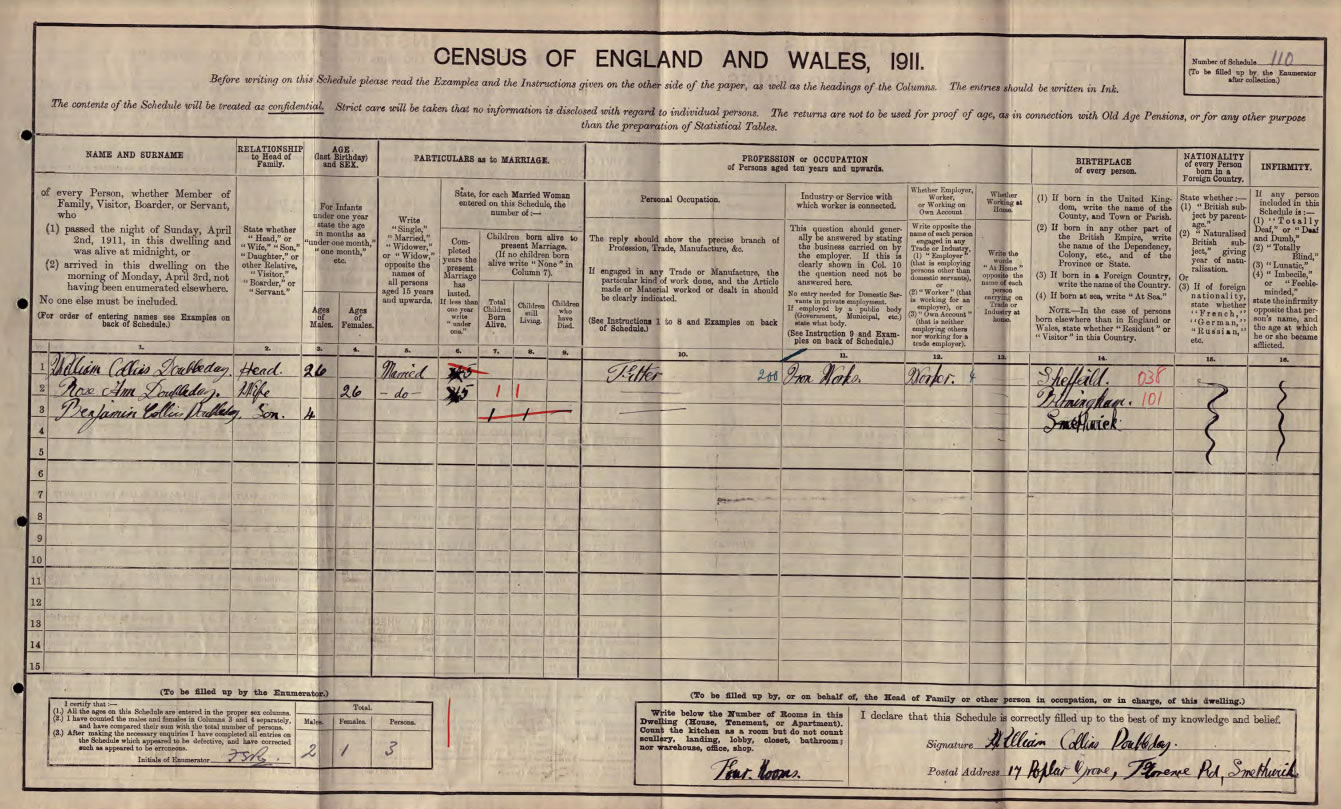 The Doubleday family on the 1911 Census

Hettie was born in 1913, registered as 'Ettie' on her birth record.

William and Rose were married in 1906. William Doubleday was the son of Benjamin Doubleday and Sarah Jane Collins. In the 1891 census, we see Benjamin and Sarah living in Sheffield. Benjamin is classed as a 'Music choir teacher' at 33 Westfield Terrace. Benjamin was from Sleaford in Lincolnshire and Sarah was from Sheffield.

He also appears with Sarah in another census entry for the same year. At 20 West Gate in Rotherham, he is listed with Sarah as a professional entertainer, with numerous other singers. Sarah was an artiste in her own right and Benjamin may have met Sarah through their mutual work in music halls. Benjamin married Sarah Jane in 1883 in Sheffield as we find on TheGenealogist.

Benjamin was highly regarded as one of the country's leading banjo players and also wrote his own banjo compositions and was starting to put together productions of his own, which required more investment and the risk that involved.

Here we see Benjamin and Sarah in the 1891 census at 20 Westgate.

Westgate has always been at the heart of the nightlife for Rotherham. Number 20 still stands today, as a nightclub. The size of the building show the popularity of both banjo playing and Benjamin Doubleday at the time as he played to packed out audiences in both Rotherham and Sheffield and other northern venues.

Benjamin's business ventures in the fickle world of show business unfortunately start to go very badly for him. We must assume either performances were not well attended or other factors went against him as in 1891, he appears in the Perry's Bankrupt and Insolvent Gazette as seen on TheGenealogist. According to the Gazette, he also owes money to a William H Morton.

Benjamin in the Perry's Bankrupt and Insolvent Gazette.

The bankruptcy would have put an enormous strain on both himself and his family life. It looks like it played a major part in the breakdown of his marriage, as by 1901 he is no longer with Sarah and all of his children.

However, in the 1901 census, we find that he is slowly getting back on his feet and visiting the house of Frederick Hill, a table blade forger from Sheffield. His occupation is classed as 'Music teacher' in the census record.

May Francis and Harriet also appear to be visiting with him and at this time they had formed a musical group, 'The Darrell Trio', as pictured here. Benjamin is still very much involved in show business. 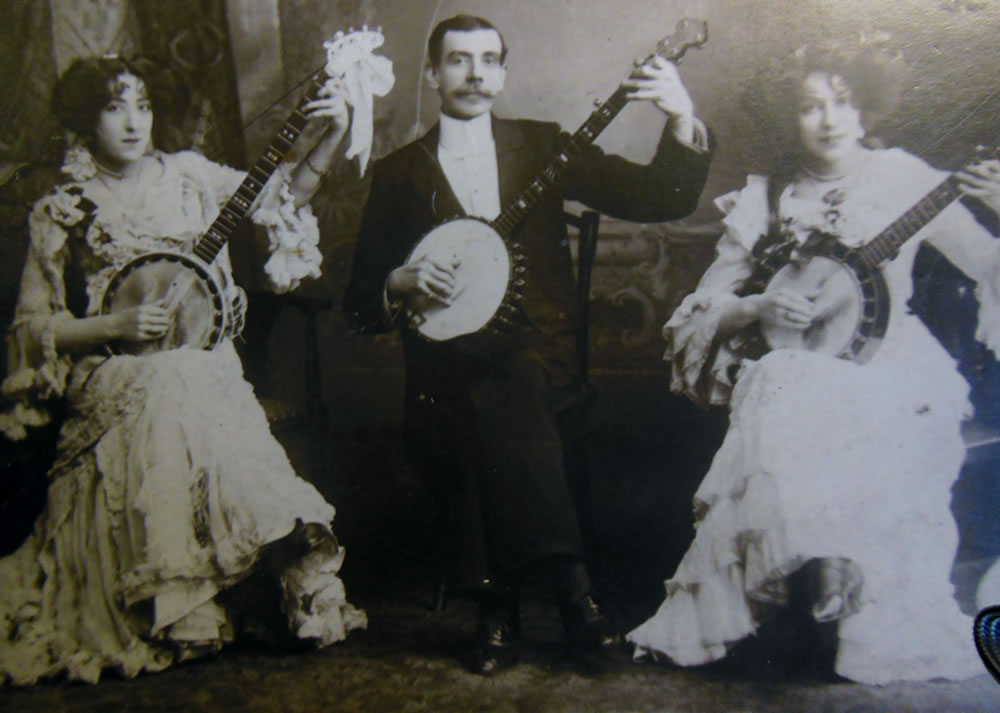 Benjamin sadly died on 1907 in Chesterfield at the age of 50. Here we see a copy of his death record. 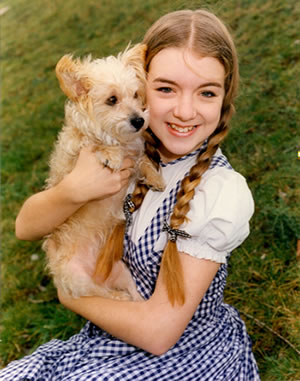 The strain of his bankruptcy may have contributed to Benjamin's early death but he carried on performing and playing his banjo right up to his death. His love of music, performing and show business in general was an influence and he would have approved of the success of his great great grand-daughter and the many productions she has starred in.

See the connections between her ancestors and the names behind the stories on TreeView, the online tree builder. Click here to view the Sheridan Smith tree.