Julie Walters - Who Do You Think You Are?

Award winning actress Julie Walters, recipient of a number of BAFTA awards and star of Educating Rita, Mamma Mia! and Harry Potter fame, was born Julia Mary Walters in St Chads Hospital, Edgbaston, Birmingham on the 22nd February 1950. She initially trained as a nurse before embarking on a successful acting career.

Here we find a copy of her birth record on TheGenealogist.

Julie's mother, Mary Bridget O'Brien, an Irish postal clerk, ran away from her country of birth, Ireland, aged 26, initially telling her family she was just going on a visit to England. She didn't come back and 6 months after leaving Ireland she married Thomas Walters in Birmingham. Here we find a copy of their Marriage Record on TheGenealogist.

Mary settled and remained in Birmingham until her death aged 74 in 1989 as can be seen on the copy of her death record.

Mary Bridget O'Brien was born on a small farm in County Mayo in the West of Ireland. Her parents were Patrick O'Brien and Bridget Clarke, living in a part of the country renowned for the hardships of trying to make a living and survive in a rocky landscape. Most were tenant farmers and many were campaigning for the right to have their own land.

Bridget came from the Clarke family of County Mayo. Shortly before her birth in 1915, we can see her family listed in the 1911 Irish Census, living at 17 Ballynamarroge, Islandeady. In the 1911 Census, Julie Walters' grandmother, Bridget was aged 29, yet to marry Patrick O'Brien. Bridget lived with her parents at 17 Ballynamarroge in County Mayo. With one further click we can view the actual census document and see that Anthony Clarke had the profession of 'tenant farmer'. 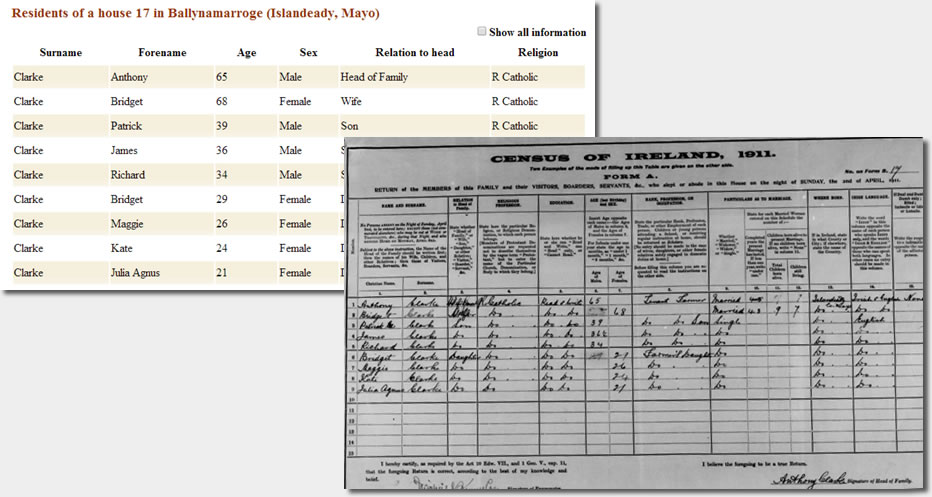 Bridget Clarke in the 1911 Census 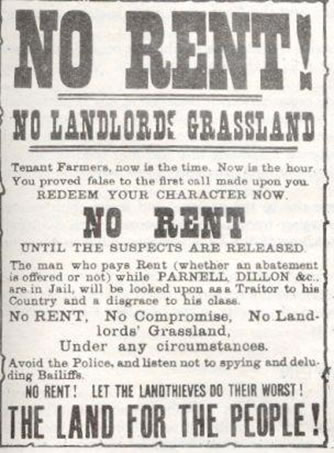 A typical poster used in the campaign in the 1880s

Born in 1846, Anthony Clarke was born into a time of campaigning for more rights for tenant farmers to own their own land. When he was aged 33, the Irish National Land League was formed in 1879 at The Imperial Hotel in Castlebar, the county town of Mayo. The main aim of the Land League was to abolish the powers of the landlords in Ireland and to enable tenant farmers to own the land they worked on. The struggle and campaigning of these times is known as the Land War.

The organisation campaigned for more than 40 years to try to achieve greater fairness. At the very first meeting uniting all protestors, Charles Stewart Parnell (famous nationalist politician)was elected president of the league and Anthony Clarke became one of the first members.

The Irish National Land League campaigned through some very tough times for Irish farmers and the rural population. From 1874 agricultural prices in Europe had dropped, followed by a number of bad harvests and by 1878 the position was many Irish farmers were unable to pay the rents that they had agreed particularly in the poorer and wetter parts of the West of Ireland. The 1879 Famine added a further desperate need for change.
After many struggles and conflicts with the authorities, the members and political leaders of The  Irish National Land League achieved a fairer system and by 1914, 75% of occupiers were buying out their landlords. The Land League became the Irish National League and subsequently campaigned on wider issues including Home Rule. It really was a society changing organisation.

Here we view Anthony Clarke and his family in the 1901 Census in House 21 at Ballynamarroge in County Mayo.  The family are all literate and their education will have enabled them to play a leading part in the struggles and campaigns of the Land League. 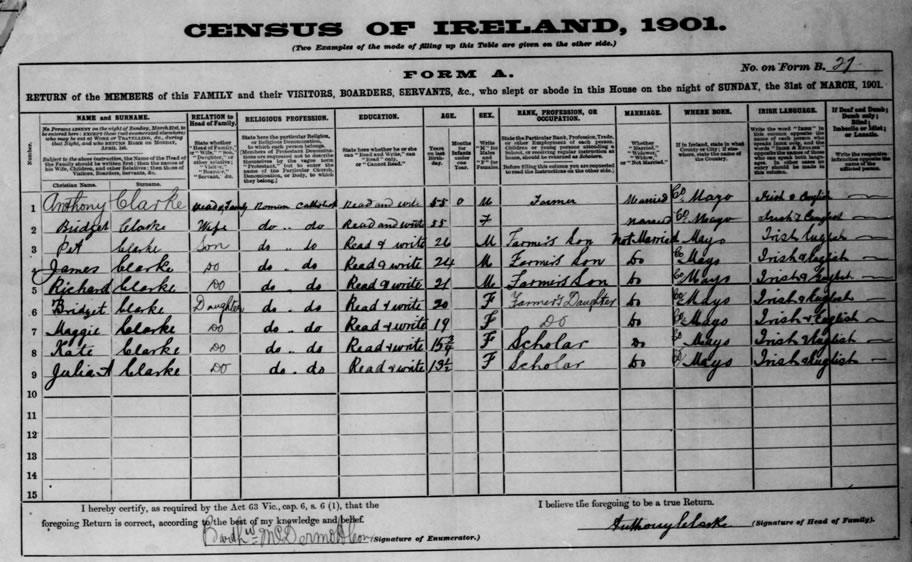 Anthonly Clarke & family in the 1901 Census

Julie's mother, Mary married Thomas Walters during the Second World War in 1941. Bridget came to live with Thomas and Mary towards the end of the war after the death of Patrick in Ireland. She had found the farm too much to run on her own.

Thomas Walters was born in 1909 to parents Thomas Francis Walters and Amy Selina Crisp. Thomas Francis had been a soldier previously, as a young man he had been stationed in South Africa at the time of the Second Boer War.  Here we see a copy of Thomas Junior's birth record on TheGenealogist:

Thomas Junior lived with his family at 5 Rathbride Terrace, Ickneild Port Road in Birmingham. Thomas Senior is listed as a 'Packer'. The family live in a terraced house of 3 rooms to accommodate 5 people, typical of those in manual labour jobs in the early 1900s. Thomas senior was also thought to have a few sideline activities including 'illegal bookmaker' before the First World War. 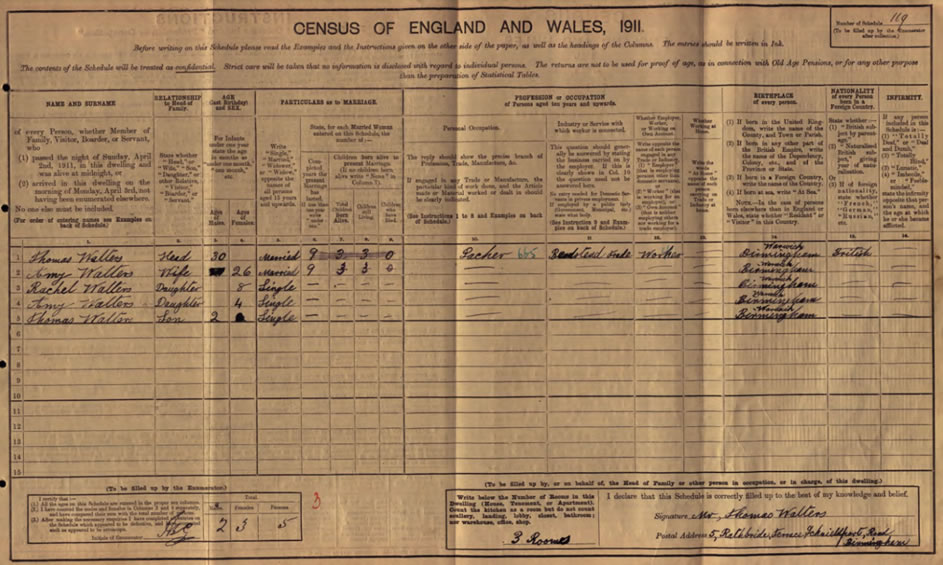 The Walters Family in the 1911 Census at TheGenealogist.co.uk

Like so many of his generation, Thomas Walters Senior fought and served with the British Army in France in the First World War. He had previously volunteered for the army in South Africa during the Boer War campaign and as a trained soldier was called into action at the outbreak of war in 1914.

Using the military records on TheGenealogist, we find the details of Thomas Francis Walters, a Private in the 2nd Battalion of the Royal Warwickshire Regiment. Sadly he was killed in action in June 1915 and is commemorated at Le Touret Memorial. Here we find Thomas in the Casualty Lists on TheGenealogist. 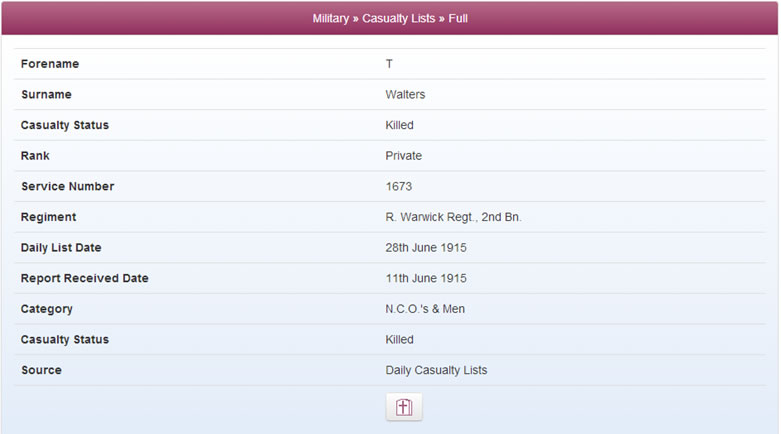 One click takes us to more information on where he is commemorated. The Le Touret Memorial lists the numerous British casualties in the heavy fighting at the Battles of Aubers Ridge and Festubert, we can presume Thomas was killed in one of these frustrated British attempts to break through tough German defences which claimed many lives. 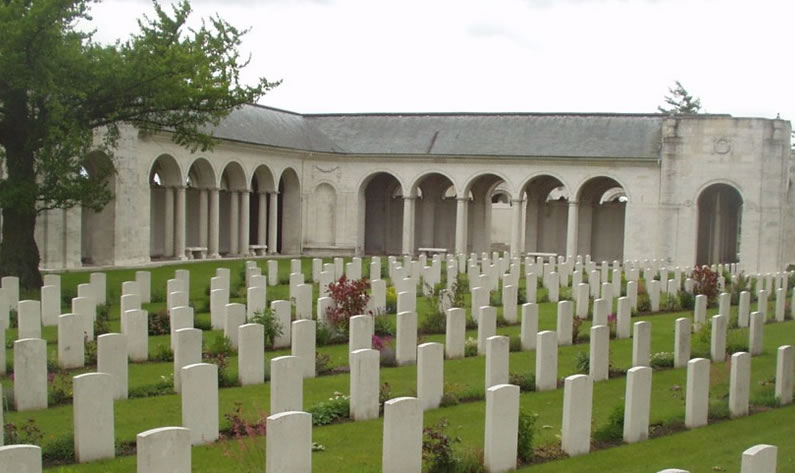 See the connections between her ancestors and the names behind the stories on TreeView, the online tree builder. Click here to view Julie Walters' tree.