How did our ancestors keep up to date with news in The First World War?

From the famous battles, the spiralling casualty rates, the increasing use of photography and the use of 'gallows humour' by the troops at the front, The First World War saw a great change in the way news was reported.

By 1914, the number of illustrated publications, many of them daily picture papers had meant more news than ever was available for the public to read about regarding 'The Great War' as it was then termed. TheGenealogist, already with an extensive collection of First World War newspapers has now added to this collection with the launch online of 108 issues of The Illustrated War News and 192 issues of its sister publication, the famous Illustrated London News from 1915 to 1918. The Illustrated London News combined photography with the use of graphical illustrations from eye witness reports to give readers a flavour of what was happening at the front. 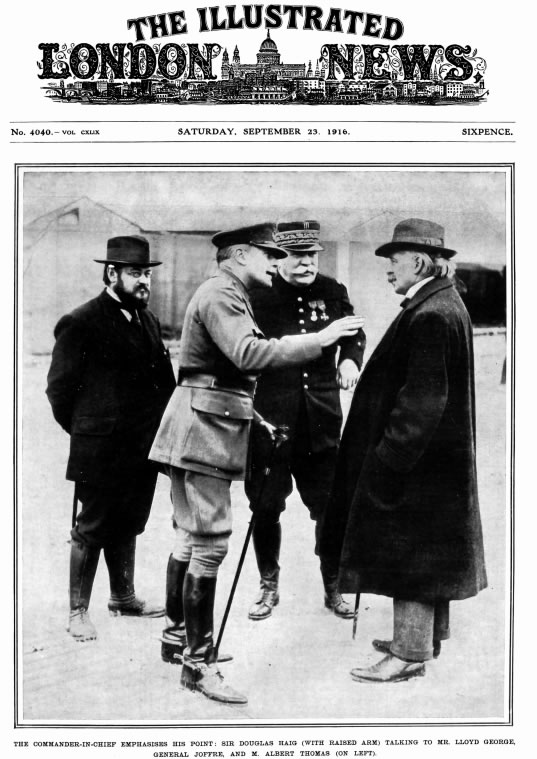 The Illustrated War News from the very beginning of the war published illustrated reports directly related to the war itself.  This magazine featured articles, photographs, diagrams and maps and had the largest number of artist-correspondents reporting on the progress of the war.

In the first few weeks of the war, correspondents were ordered to withdraw from France by the Secretary of State for War, Lord Kitchener and censorship was enforced with all letter s and telegrams vetted so realistic news as we know it today was not possible. Therefore, all the press could do was publicise government propaganda, despite the struggles and retreat of The British Expeditionary Force.

Here we see the Illustrated London News article on the battle in Thrones Wood fought by The Royal West Kent Regiment. 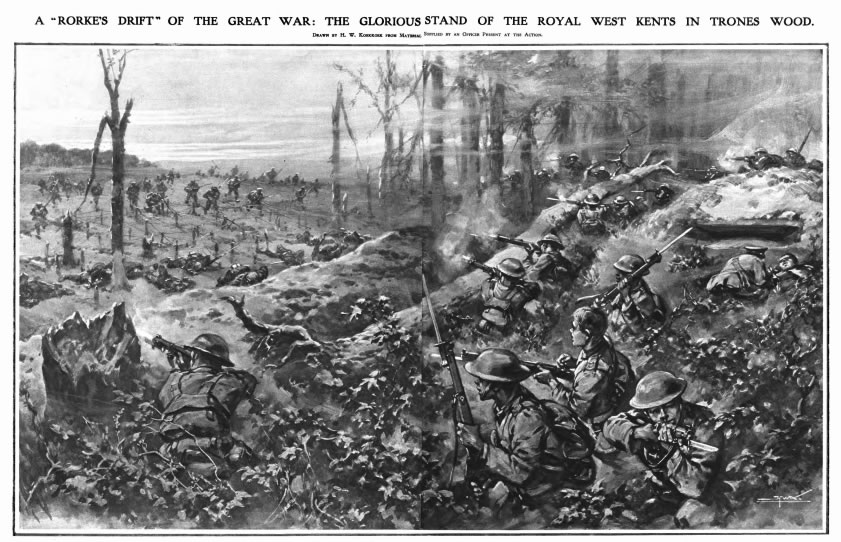 Illustrated London News article on the battle in Thrones Wood

Graphical illustrations would picture battle scenes so the British public would get a general impression of what life was like. Below we see an illustration of a South African Regiment heading to a front line trench. 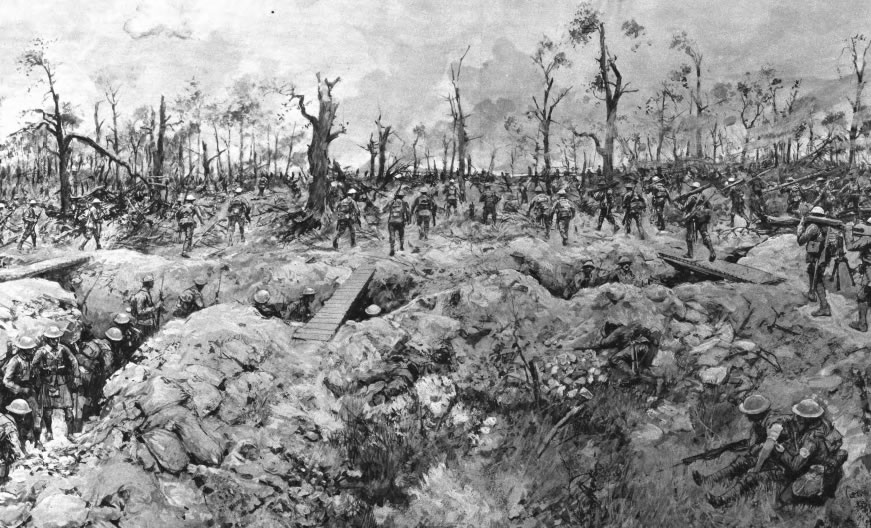 Along with graphical illustrations, the papers increasingly used photographs to show events of the war in more detail. Below we see from The Illustrated War News some of the 'cheerful British wounded' heading back to Britain after being wounded in the ferocious Battle of Loos in 1915. 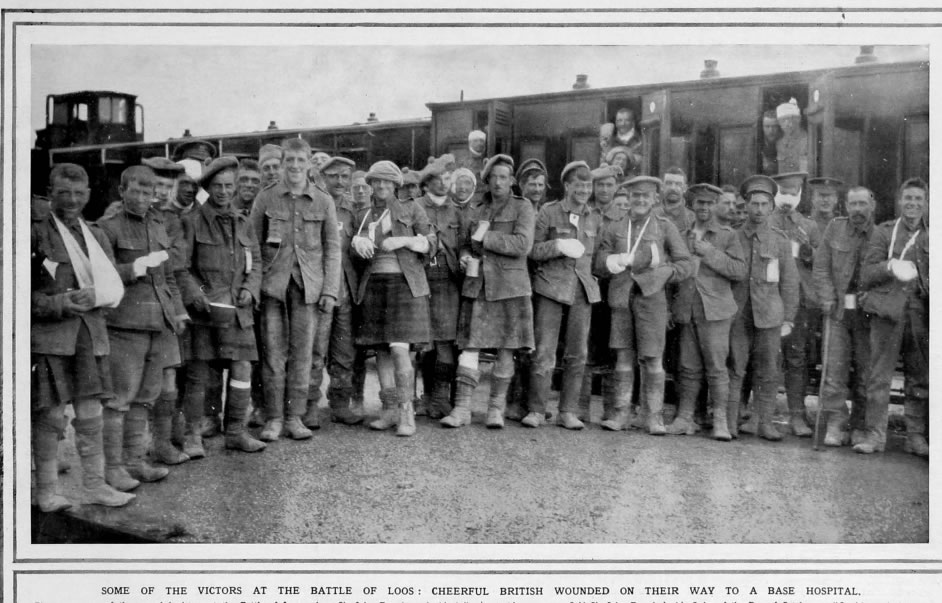 Some of the 'cheerful British wounded' heading back to Britain

The Illustrated London News and The Illustrated War News faced increasing competition from daily papers such as The Daily Mirror but the format and skilled use of illustrations and imagery kept the weekly papers still popular in the war years.

Here we see in The Illustrated War News, the highly patriotic and positive spin produced in the newspapers of the time, with its' news reporting of the Battle of the Somme: 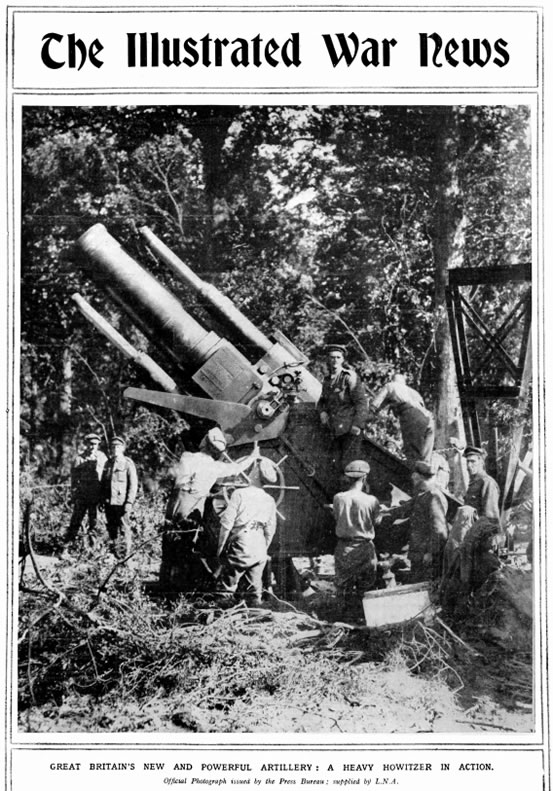 Cover of The Illustrated War News 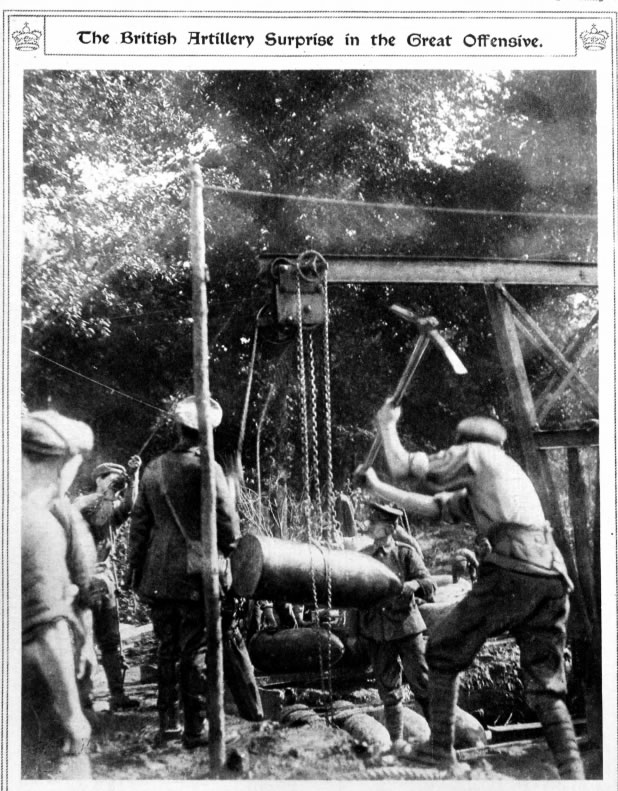 Page from The Illustrated War News

The new additions to the newspaper collection on TheGenealogist also contain the more truthful and realistic views of the frontline troop that were subversively published at the time by the troops themselves. The B.E.F. Times (incorporating the well- known Wipers Times) was produced by the British soldiers of the 12th Battalion Sherwood Foresters (Nottingham & Derbyshire Regiment), 24th Division.  The Editor was Captain Frederick John Roberts MC and the Sub Editor was Lieutenant John Hesketh Pearson MC, both decorated officers. They were part of a team who using a requisitioned printing press produced the famous publication.

The paper consisted of poems, reflections, army in-jokes and lampoons of the military situation the Division was in at the time. The name of the publication was altered as the division was moved around the Western Front. TheGenealogist has a comprehensive collection of this publication, even the final 'Better Times', the final publications produced at the end of the war. There had been a break in publication due to the German offensive in 1918.

The publication used 'gallows humour' to highlight the situation they were in. Below we see the cover of the March 1916 Wipers Times , advertising the deadly new German flamethrower –the 'Flammenwerfer' as a great children's toy! 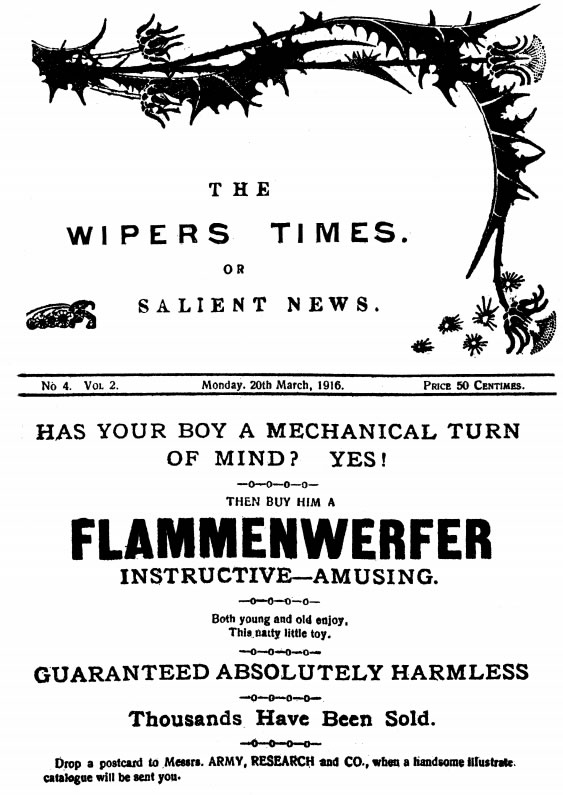 The editorial team also poked fun at the introduction of the tank in 1916 with their mock promotion of the 'Hullo Tanko' production at the Guillemont Hippodrome. The letters page, also contains the humour that would have appealed to the troops at the time and the conditions they were experiencing. 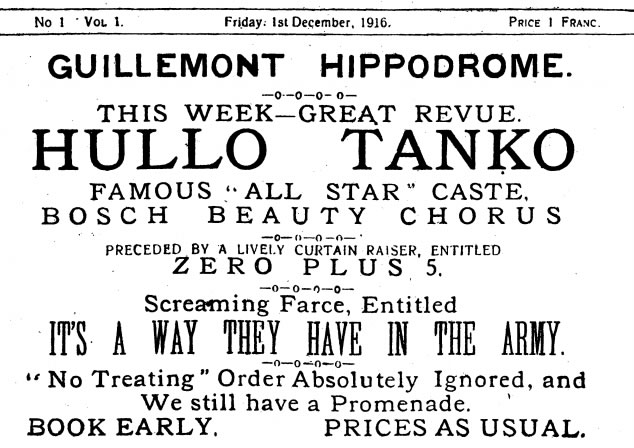 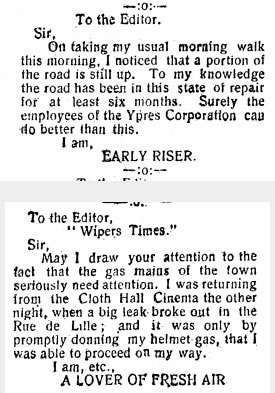 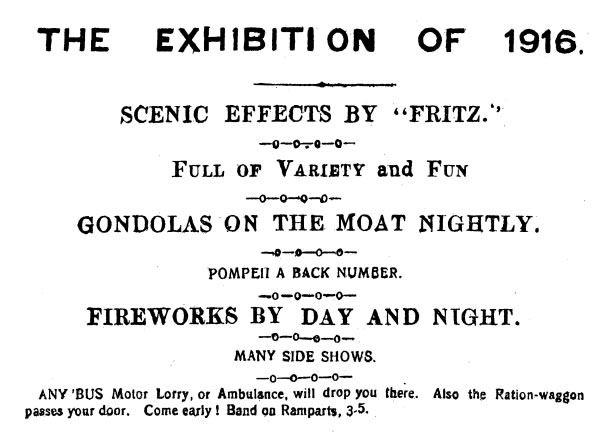 A satirical advert for the 'Exhibition of 1916' is promoted, with 'scenic effects by Fritz'.

The theme is prevalent throughout all the magazines, illustrating how the camaraderie and humour was required to make the best in what was for many a horrific situation.

Another example of the light hearted nature is the mocking of poets of the time:

"We regret to announce that an insidious  disease is affecting the Division and the result is a hurricane of poetry. The Editor would be obliged if a few of the poets would break into prose as the paper cannot live by poems alone."

The gallows humour is prevalent throughout:

"...They climbed into the trench and surprised the sentry, but unfortunately the revolver which was held to his head mis-fired. Attempts were made to throttle him quietly, but he succeeded in raising the alarm and had to be killed. This we consider real bad luck for the sentry after the previous heroic efforts to keep him alive."

The new additions are found in the Newspaper Collection on TheGenealogist, and are available to view for all Diamond subscribers: 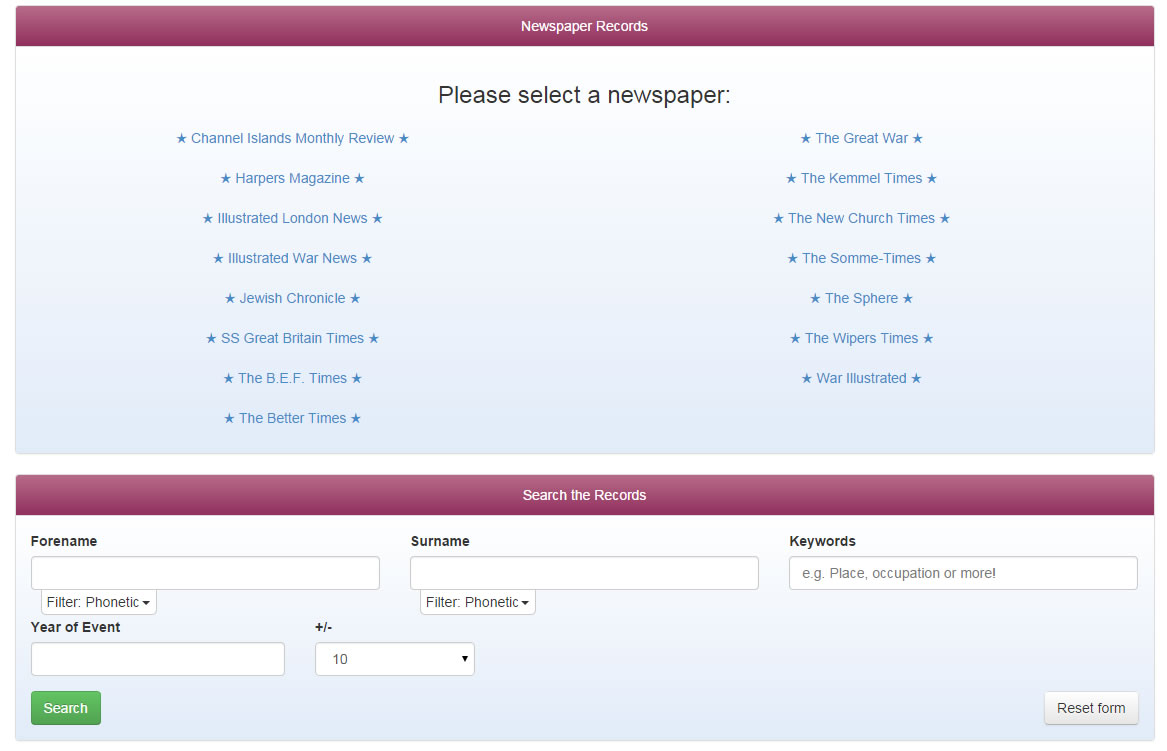 Search the newspapers at TheGenealogist

The newspaper of the time give us a flavour of what life was like, what our ancestors back in Britain would have read whilst waiting for news of loved ones serving abroad to what the troops may have read and enjoyed from a satirical point of view, mocking the hierarchical, often chaotic army methods of the time.