Hugh Dennis - Who Do You Think You Are?

Hugh's grandfathers both fought in the First World War with nearly disastrous consequences...

The actor and comedian Hugh Dennis known for his roles in Outnumbered and on the panel of Mock the Week is the fifth person to take part in this series of 'Who Do You Think You Are'.

He was born Peter Hugh Dennis in 1962 in Kettering, Northamptonshire and spent his childhood in Mill Hill, North London. His father John Dennis was appointed a parish vicar in London just after his birth and later was ordained Bishop of Knaresborough.

Hugh decided to use his middle name for his professional career after finding that there was already a Peter Dennis registered with the union Equity.

Hugh was an active member of the Cambridge Footlights and while in his final year of university he was approached by a member of the intelligence services and invited to London for interview. At this point he decided not to take the matter further, although he often makes jokes or references to his days as a 'spy'.

Hugh worked for Unilever before getting his break in the entertainment world after graduating from Cambridge University. However, he has not been the only member of his family to attend the prestigious university. His father John Dennis also attended Cambridge and later studied for his ordination at Oxford. He was a bishop for St Edmundsbury and Ipswich and is currently an honorary assistant bishop in the diocese of Winchester. John Dennis married Dorothy Hinnels in 1956. 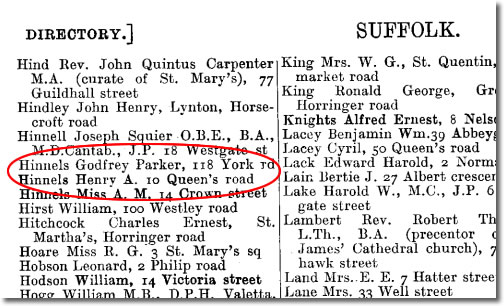 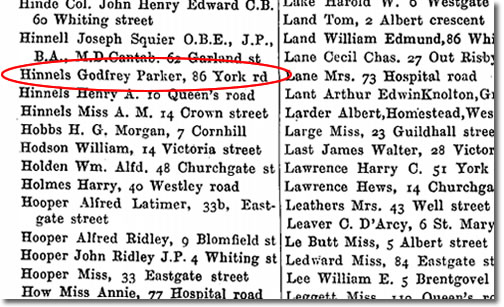 Hugh's first wife was Miranda Carroll, they married in 1987 but divorced after 6 years. He went on to marry Kate Abbott-Anderson in 1996 and they have two children together.

The show will be concentrating on Hugh's Grandfathers who served in the First World War. His paternal Grandfather Hubert Dennis trained to become an officer at Cambridge; unfortunately it appears that he suffered injuries just days after joining in the War but did manage to make it home. His maternal Grandfather Godfrey Parker Hinnels had a lucky escape from a German attack with nine others, the rest of their battalion were not as lucky.

We have looked into the history of Hugh's grandfathers and have found a connection between the two families before a marriage and also found an author.

Godfrey Parker Hinnels was born in 1895 in Suffolk to Henry Ambrose Hinnels and Elizabeth Susan Parker. Godfrey and his father Henry can be found in a 1937 Kelly's directory using our directory search available from the Master Search.

Directories are an important research tool and can provide a valuable insight into the lives of our ancestors. They can be used as a resource in tracing ancestors and be used to provide information on their whereabouts between census years or after.

As an example of this Godfrey can be traced 8 years earlier in a 1929 Suffolk directory living at 86 York Road, we can see that he had moved to 118 York Road by the time of the 1937 directory.

Her father Charles was also born in Mildenhall, his birth record can be found in our Non-Conformist collection. The page also displays birth records for his siblings as well. Some of the Non-Conformist records can contain up to three generations of one family making them a very useful research tool.

Click here to view the page from the official Non-Conformist collection at TheGenealogist.co.uk.

Godfrey Parker Hinnels married Winifred Mary Geard in 1900; Winifred's parents were Arthur Henry Robert Geard, a carpenter by trade and Lucy Ellen Stagg who were born and married in Somerset and later moved to Suffolk where Winifred was born.

We can locate Arthur on the 1871 census training as an apprentice using one of his middle names 'Robert'. The Master Search allows the option of keywords to be used, entering Arthur's surname, birth year and occupation brings back only one possibility. 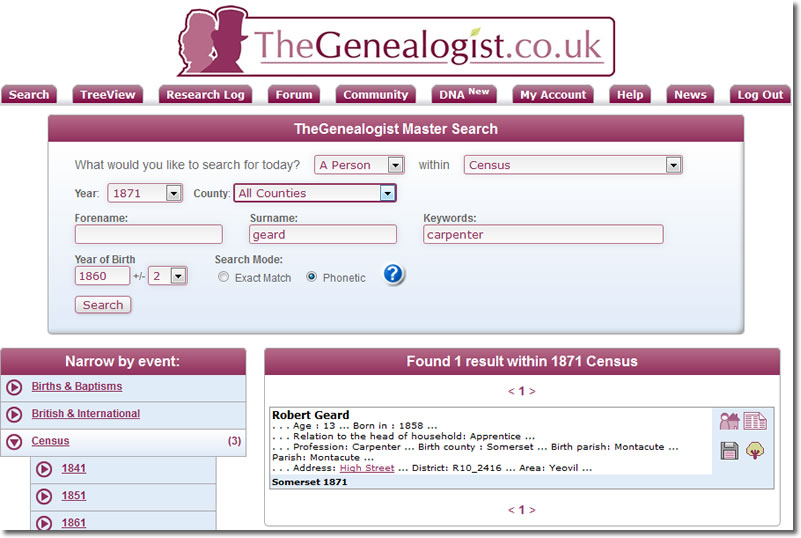 Opening the household view for Robert Geard we can see that he was in fact living and training with his wife Lucy's grandparents James and Hannah Stagg. 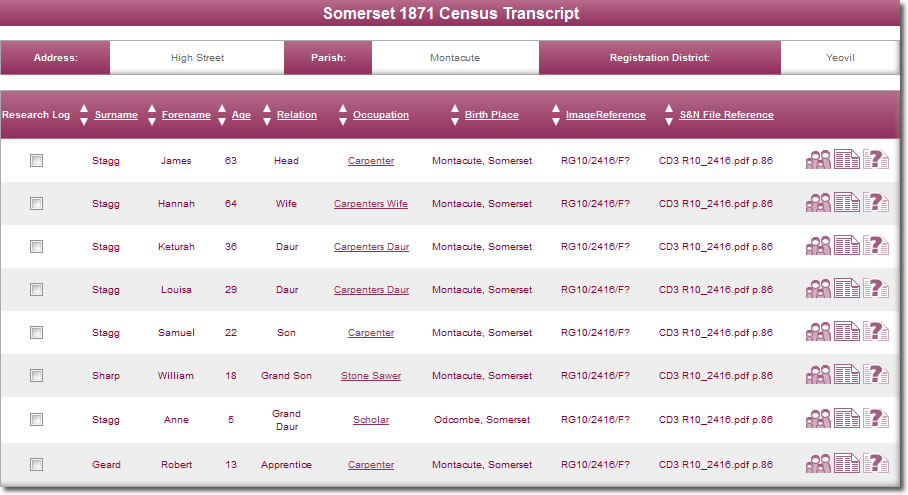 Hugh's Grandfather Hubert Ronald Dennis was born in Worksop, Nottinghamshire. He married Evelyn Neville-Polley in 1928 in Wandsworth, London. Her parents were Leonard Joseph Neville-Polley and Hannah Johnson, Leonard on the 1911 census has described himself as a science tutor. Using the All Records Search on the Master Search we can find out the name of the school Leonard was working at from a 1908 Kelly's Post Office Trade directory.

Leonard Neville-Polley was also an author and wrote a book about John Dalton who was an English chemist and physicist known for his work in atomic theory and research into colour blindness.