Ralph Little - Who Do You Think You Are?

Ralf Little at the grounds of Chirk FC – football is central to his life, and turns out to have been important in his family history, too. Credit: BBC/Wall To Wall Media Ltd/Stephen Perry

Every genealogist knows that family rumours often turn out to be false or based on misunderstandings – but then again, sometimes they can come good. That is certainly the experience of Ralf Little, the final celebrity to feature in the 2022 series of Who Do You Think You Are?.

Born in 1980, Ralf originally started training as a doctor at the University of Manchester – the city close to his heart, having grown up in Bury nearby – but he was drawn to acting and gave up medicine when he got a break as the teenager Antony in the award-winning sitcom The Royle Family at the end of the 90s. For a while acting vied with football as his focus, as he also played the game semi-professionally for teams such as Maidstone United and Chertsey Town in the early 2000s. But acting has predominated, and he is known for his roles in sitcoms and comedy dramas such as Two Pints of Lager and a Packet of Crisps and, more recently, Death in Paradise.

In his episode of WDYTYA, he mentions two family rumours: 'I have this vague recollection, maybe on my dad's side, of just a whiff of poshness or just a hint of money,' he says, adding, 'A family member was a Welsh international footballer – other than that I know nothing else.' Much of the show delves into both of these stories and finds some real substance, although we won't spoil the journey here.

We can use online resources at TheGenealogist to follow one of the key figures in his family story, Albert Lockley. Ralf's mother Eileen was born to Arthur Bailey and Albert's daughter Olive May Lockley, whose roots were in Wales. The site's civil registration indexes collection has the couple's marriage record, registered in the last quarter of 1943. (Ordering the certificate from the GRO of course then connects back to the previous generation, with details of each spouse's father, in this case Harry Bailey and Albert Lockley, the latter deceased by the time of this marriage.)

In the show Ralf meets with his cousin Heather, and visits what was the Lockley family home (where he had visited his maternal grandparents as a child) – 1 Spring Villas in Chirk Bank for around a century after Albert had bought it around 1905. Chirk Bank was tucked just in the corner of Shropshire, only a mile from the town of Chirk over the border in Wales.

A great place to start researching mid-20th century ancestors is the 1939 Register, compiled as a result of the National Registration Act as the foundation of wartime identity cards (and subsequently the National Health Service). This is the most complete snapshot of the population in England and Wales between 1921 and 1951, given the loss of the 1931 census in a wartime fire and that no census was taken in 1941. Fortunately TheGenealogist has a transcription of these 1939 records, which can then give us a springboard back to earlier generations. Ralf Little's maternal grandfather Arthur Bailey is here, for example, and we learn lots of useful details: notably his occupation (mental nurse – this is explored in detail in the WDYTYA episode), his date of birth (13th September 1919) and the details of his parents, Harry and Harriet E. Bailey. 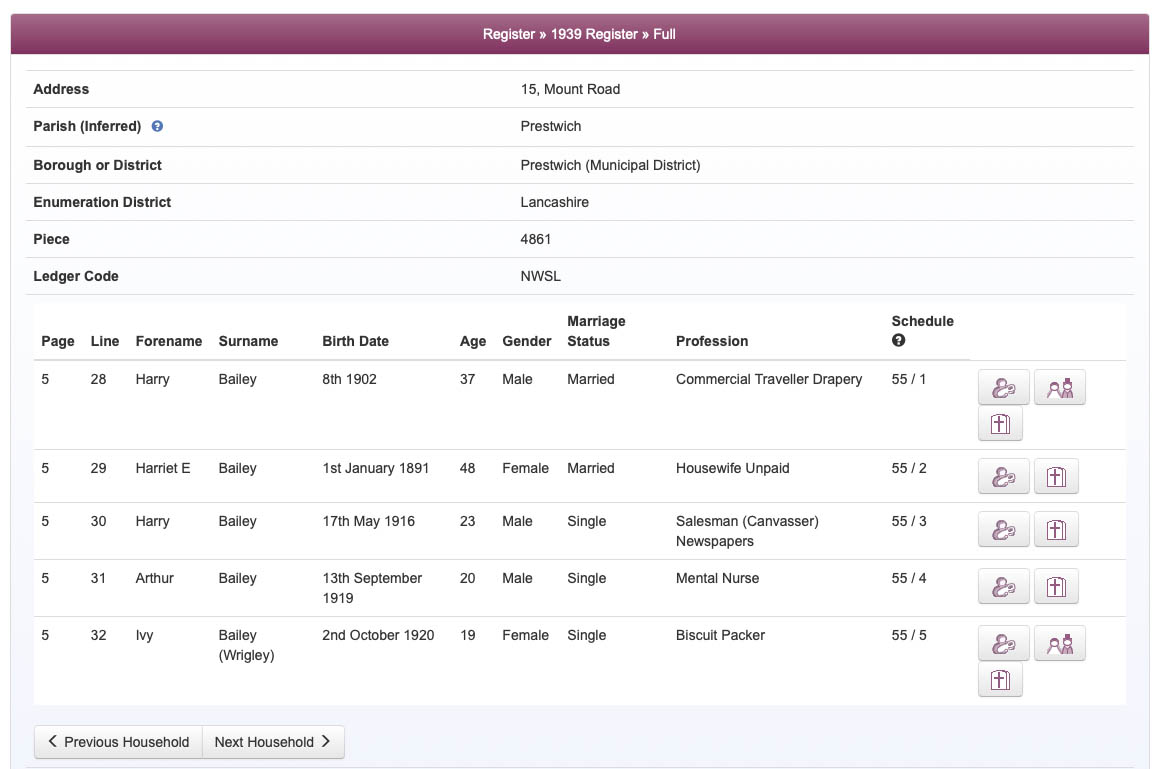 The 1939 Register at TheGenealogist helps us track down Arthur Bailey, as well as details of his parents 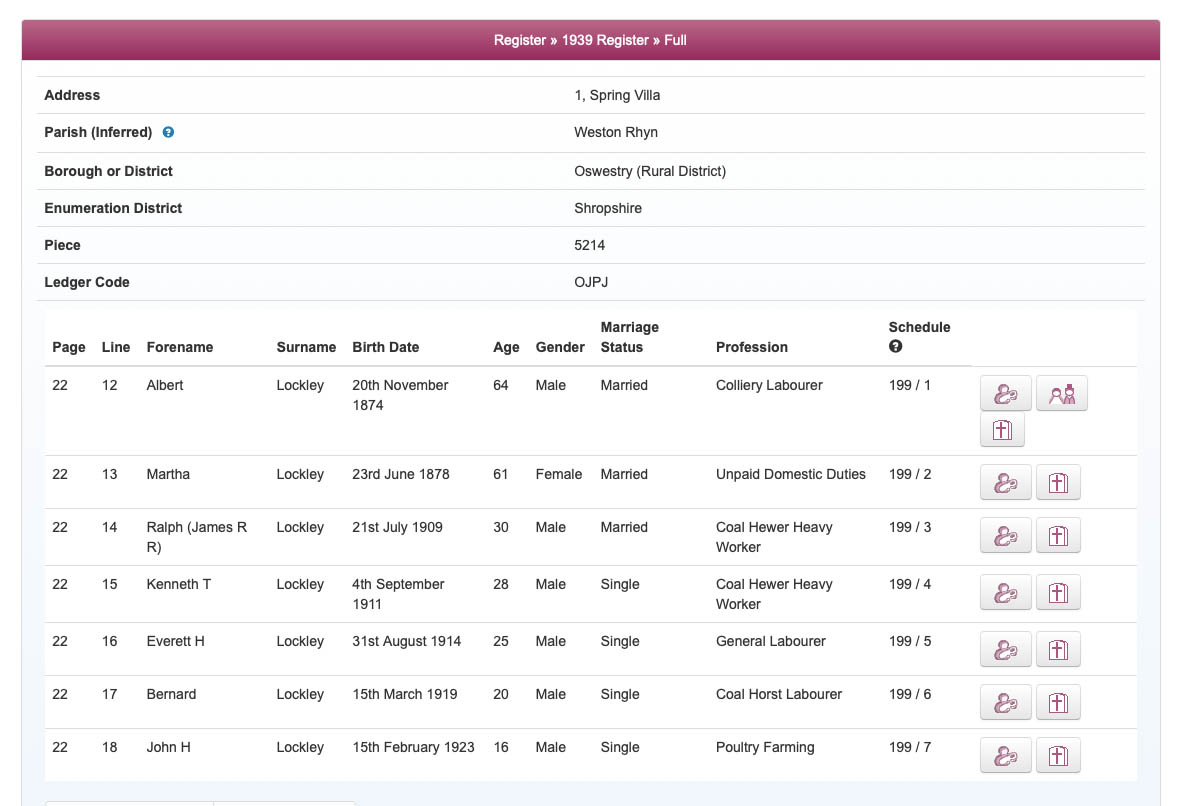 Ralf's great-grandfather Albert Lockley is also in the 1939 Register

The same 1939 dataset likewise offers gold dust details for Olive's father Albert. There he is at Spring Villa(s) – and from this we gain his date of birth (20/11/1874), details of his wife (Martha, born 1878) and their other children, among them a Ralph. Plus we learn that Albert was a colliery labourer – still working at the age of 64. At this point we can jump to TheGenealogist's Map Explorer to get a useful sense of place – Spring Villas are on Oaklands Road, which we can search for in the interface. Zooming out a little on the 1890s Ordnance Survey provides more clues – here we can see Chirk Bank (bottom centre), the town of Chirk and, towards the top, the nearest colliery: Brynkinalt.

Brynkinalt (also spelled Brynkinallt) opened in 1860, and became famous in 1912 when it was the only pit in Denbighshire to stay open during a miners' strike, with soldiers drafted in to protect the workers. In the 1930s, almost 1000 men worked underground here with a further 300 on the surface. Records held by Durham Mining Museum (see http://www.dmm.org.uk/indivdu7/u77019.htm) reveal that a William Lockley died there in 1917 after falling off a roof at the age of 67. You can read more about this colliery's history and see pictures at https://www.wrexham-history.com/brynkinalt-colliery/. The mine was finally closed in the 1960s and only a few structures remain in what is now a landscaped park. 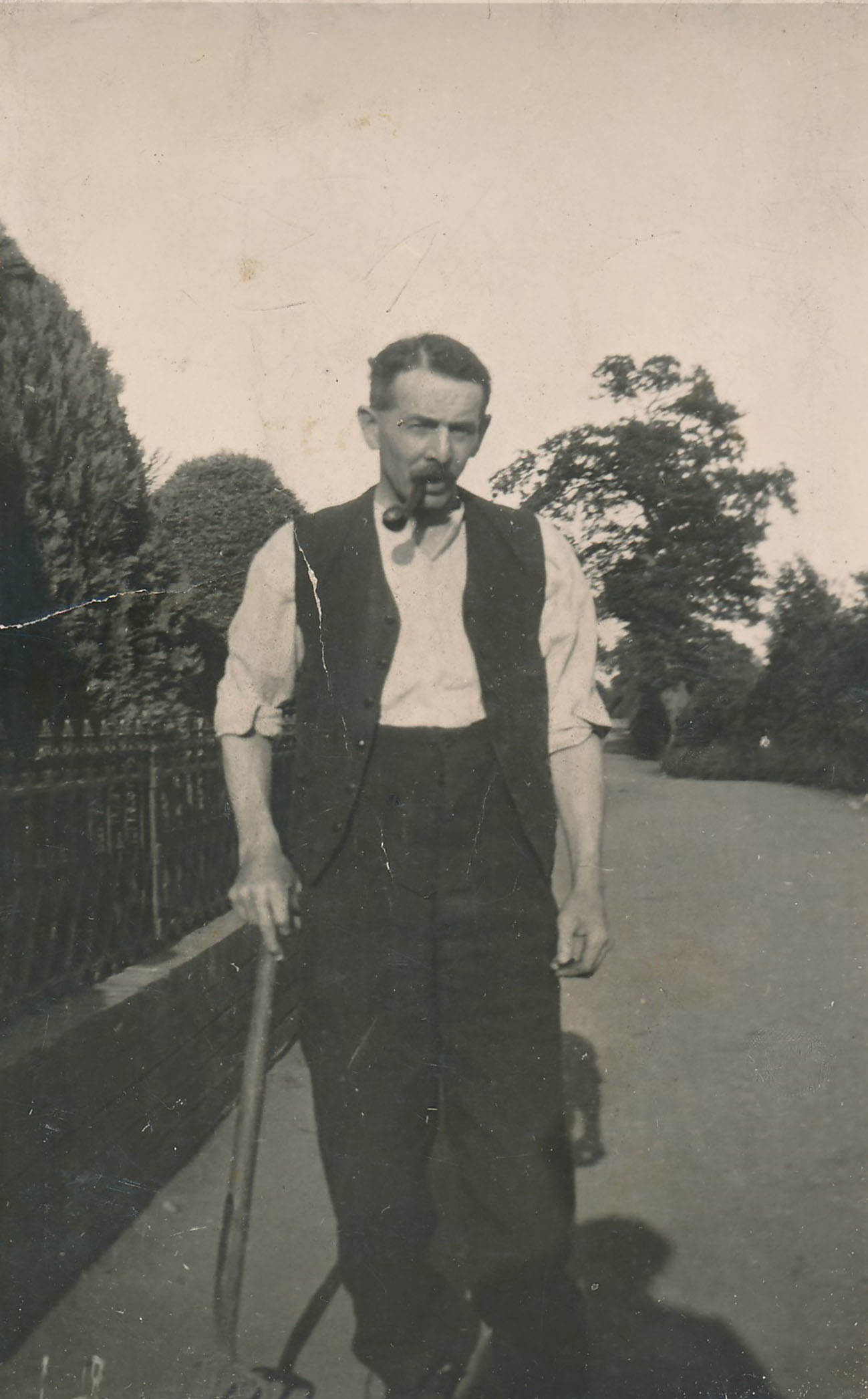 Armed with the info we gleaned about Albert Lockley, we can push back further through time using the census records at TheGenealogist. There he is at Spring Villa in the 1911 census, for example, listed as a miner and with a growing young family. Here we also learn that he was born in Bridg(e)town near Cannock, Staffordshire, thus taking one line of Ralf Little's roots towards the Midlands. In 1901, Albert and Martha, in their 20s, were living at 134 Chirk Green, nearer still to the colliery.

In fact we can then go further – in 1881, seven-year-old Albert is at No 29 Chirk Green Cottages with his parents, William, another coal miner, and Louisa. Louisa was from the Cannock area too – but William was born in Birmingham. He is listed as being 31 years old, which would then tally with him sadly being the same William who died in an accident at Brynkinalt in 1917: here are men who spent their whole lives in grim hard toil at the mines, always with the spectre of danger at their shoulders. William's demise is corroborated in parish records, too: TheGenealogist has a large collection of these, and among them is William's burial register.

At the end of his episode of WDYTYA, Ralf Little comments that the journey into his roots has been 'a very grounding experience' – certainly all too true with these coalmining links. The trail continues back in time, and we can learn more about William and his forebears from further records at TheGenealogist – as always with genealogy, the question is where to stop! Certainly we can see that this branch of Ralf Little's forebears was only too familiar with the harsh realities of working-class life, although Albert would find two very different forms of escape from it. For more on those – and for that 'whiff of poshness' elsewhere in Ralf's roots – enjoy the show and find out!