To the Cottage Born 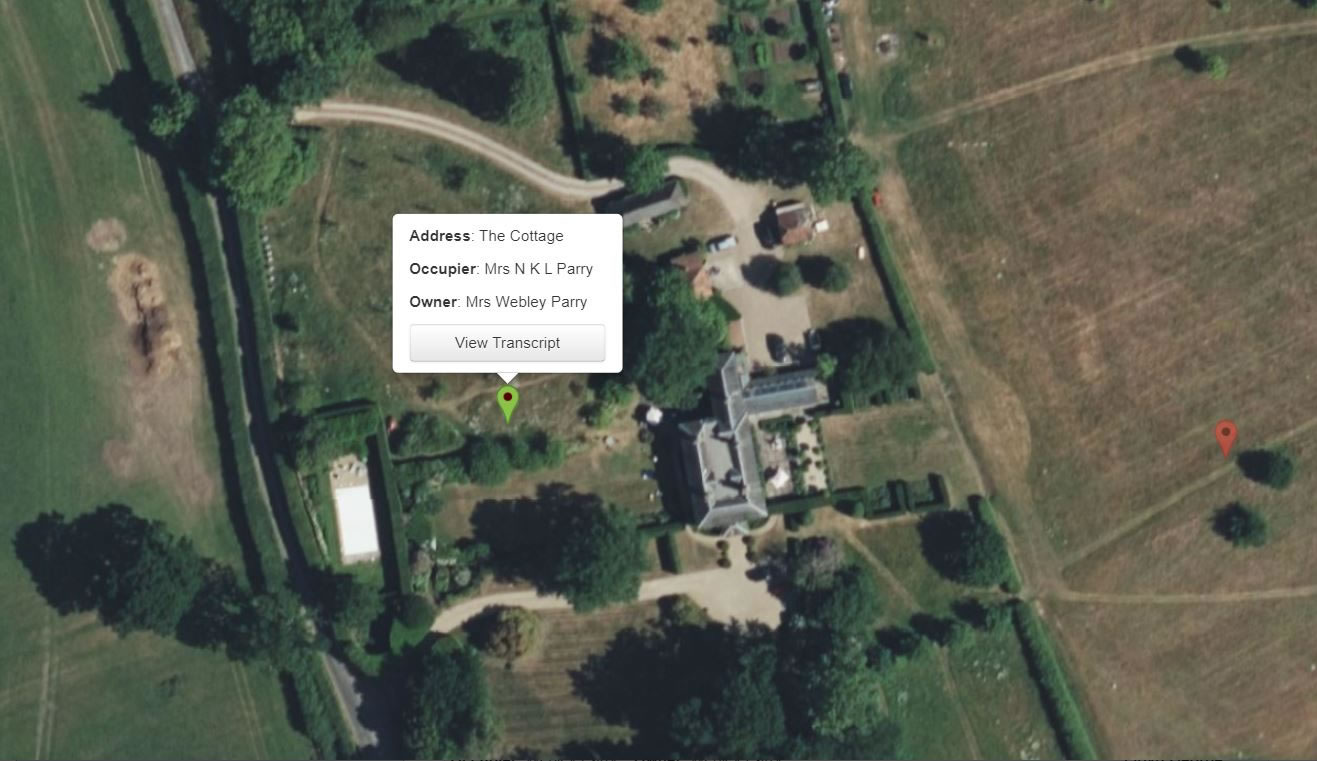 On Pease Hill in a West Berkshire village is a Grade II listed manor house. The land on which the house stands had been a part of the Bucklebury Estate that had belonged to the Winchcombe family and their descendants for many generations. Indeed the estate boasts that it had had only two owners over the last 900 years – firstly Reading Abbey and then people who could trace their lineage back to the Winchcombe family. Consulting the entry in the Kelly's Directory for Berkshire, Buckinghamshire and Oxfordshire 1915 in TheGenealogist's Trade, Residential and Telephone Directory records we are able to read that the manor that had belonged to Reading Abbey had been granted to John Winchcombe in 1539. He was the son of a famous clothier of the same name and was known as "Jack of Newbury". The next generation, in the guise of John's son, Henry, was created a baronet in 1661 and married Frances, daughter of Thomas Howard, Earl of Berkshire and they had a son, Sir Henry, who inherited the Bucklebury Estate, but died without a male heir. 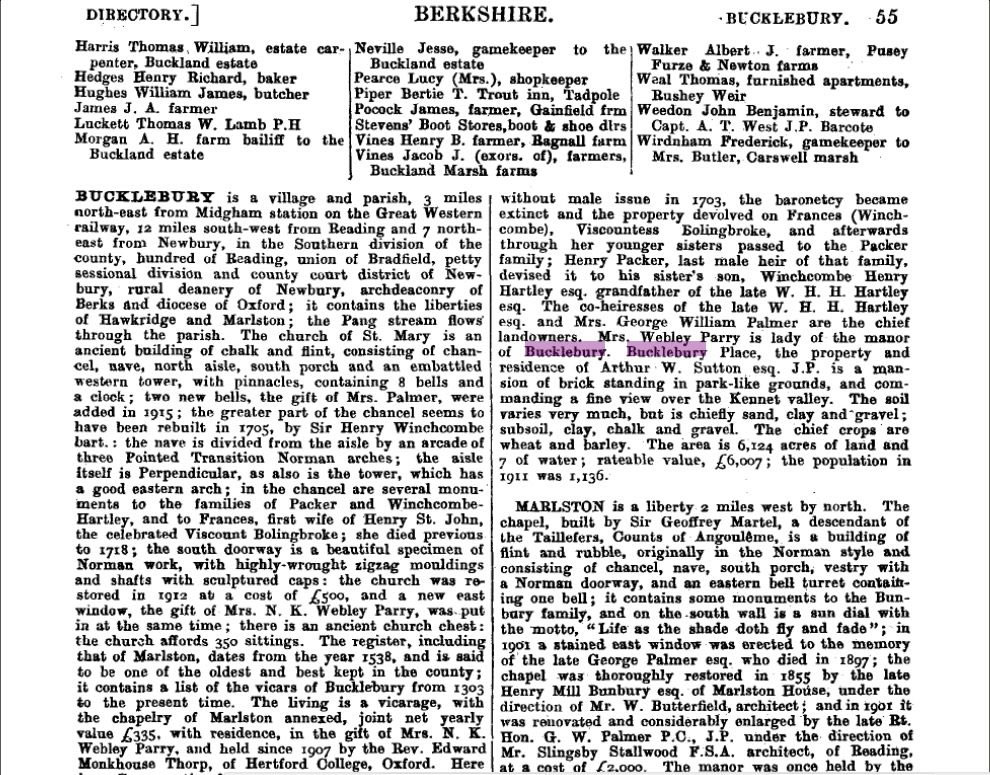 Passing for a period down the female line we see that by the time that the Lloyd George Domesday Survey in 1910-1915 was being recorded for land tax purposes, that the lady of the manor had become Mrs Webley Parry. Searching the Landowner & Occupier records on TheGenealogist shows us the names of the owners and occupiers in the village. This reveals to us that Mrs Webley Parry is recorded as the owner of a large number of the plots in this part of Berkshire including Bucklebury Common. 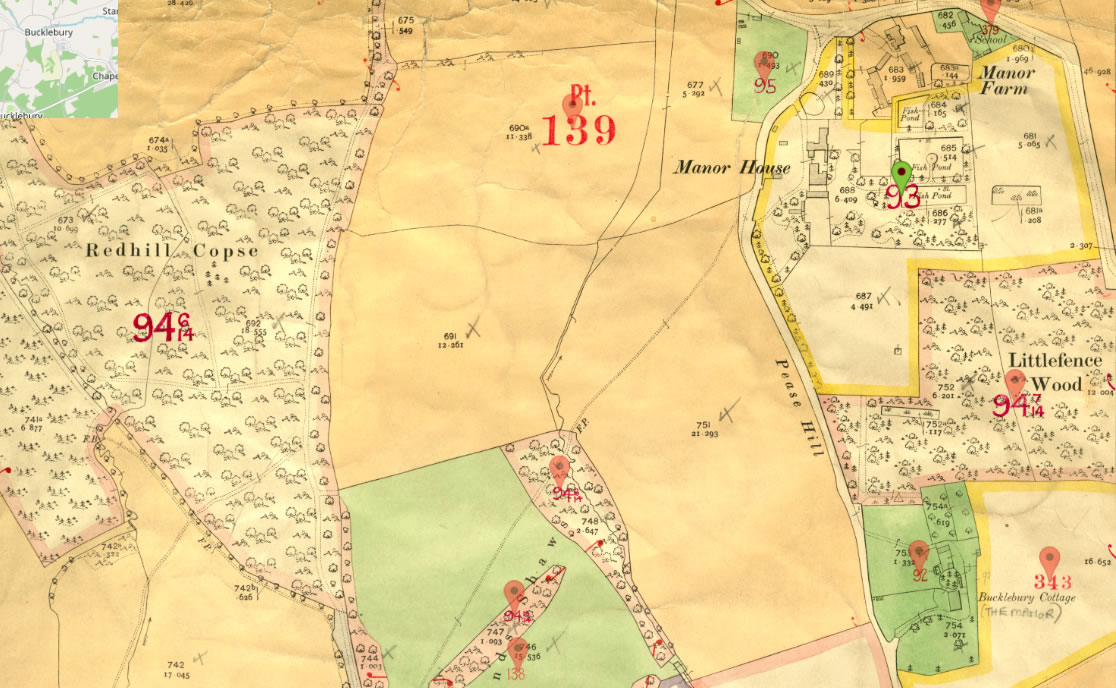 IR126 map from The National Archives digitised on TheGenealogist for plots identified in the Lloyd George Domesday Survey reveals the Manor House and Bucklebury Cottage (The Manor).

One property belonging to Mrs Webley Parry is named as The Cottage in the IR58 field books that are part of the Lloyd George Domesday Survey. This house and gardens appears to be her home and, intriguingly, printed on the coloured map that accompanied these Inland Revenue Valuation Office records it is called Bucklebury Cottage. However it had then been annotated in pencil as The Manor. Further up the road, to the north of this residence, we can see another property which has been labelled as the Manor House by the cartographer causing just a little confusion. 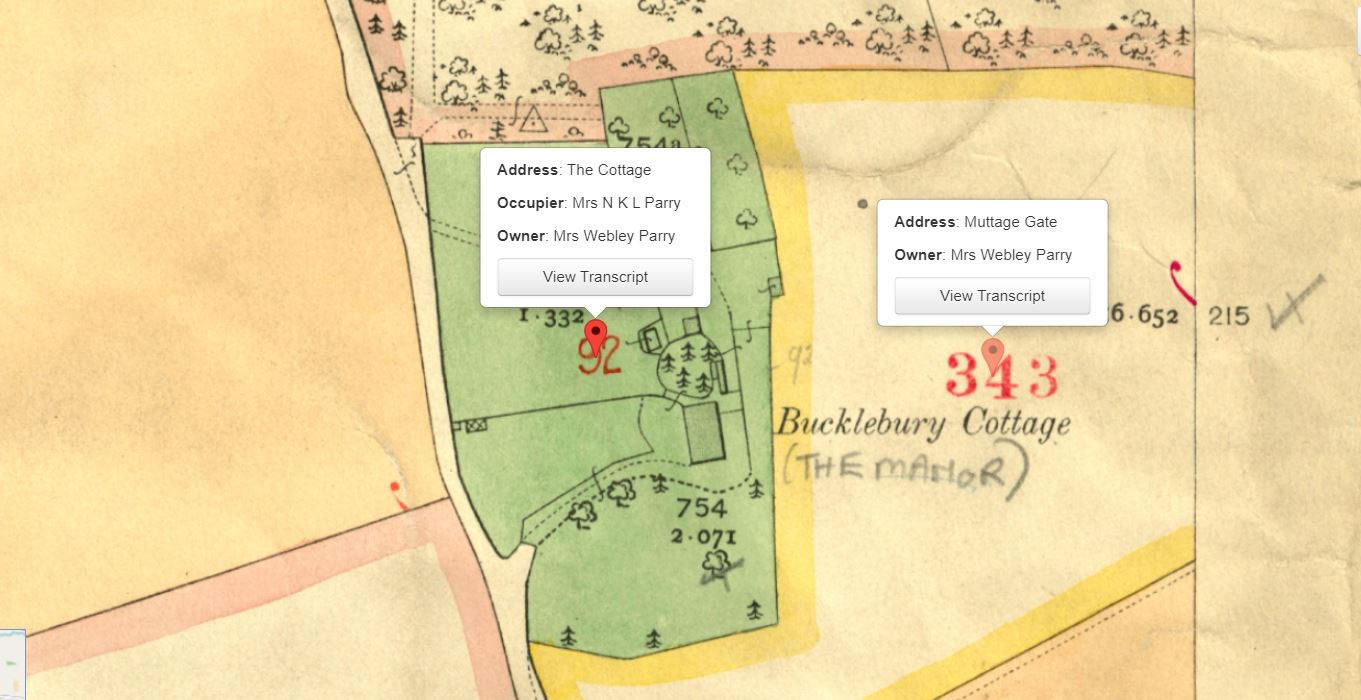 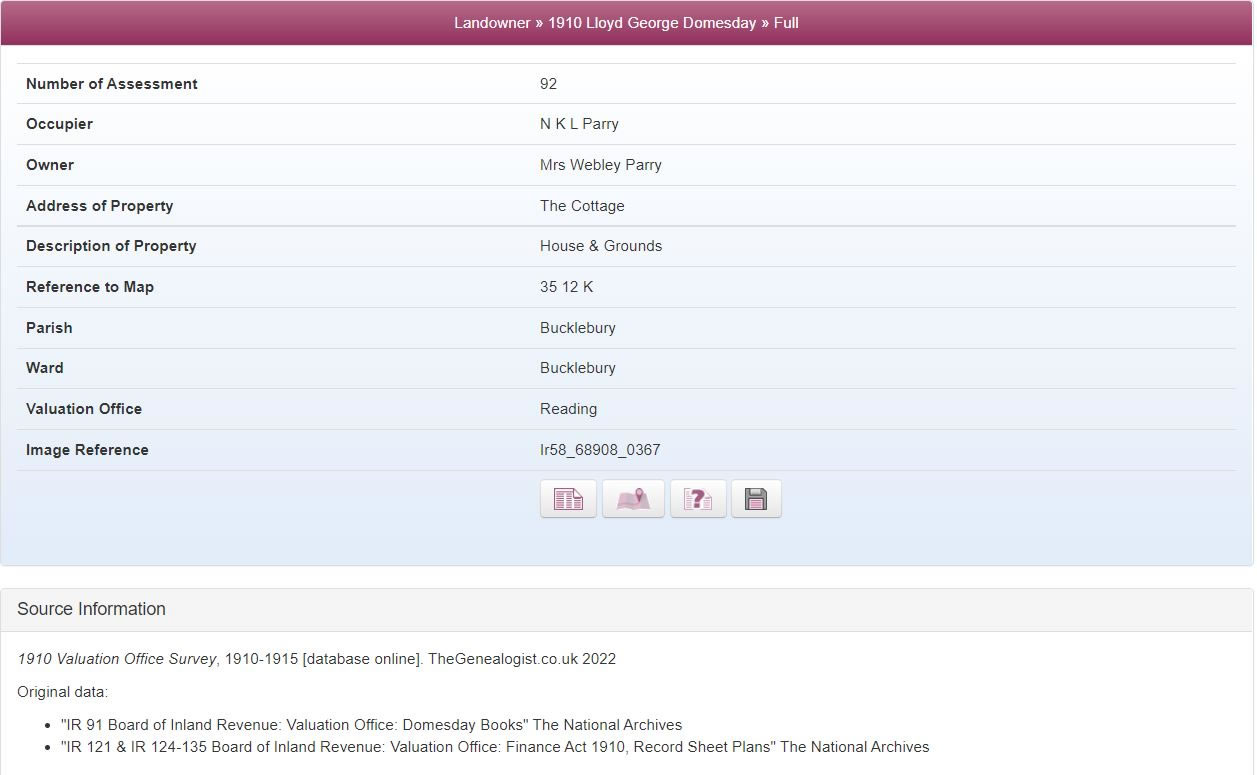 This intriguing conundrum warrants a bit of investigation to discover why the Manor House had been relocated down the road from where it is marked on the Ordnance Survey map. It turns out that the story behind this renaming is one of practicality after disaster had struck just up the road at the original manor house. It had been in 1830 that the family's home, Bucklebury House (which had been the old manor) was gutted by fire. This house was then demolished shortly afterwards, leaving only servants' quarters and associated outbuildings standing. In the mid-1830s, Winchcombe Henry Howard Hartley, the lord of the manor at this time had a smaller Georgian manor house built on the higher ground immediately south of the old house. This was called by him 'The Cottage' and the family then mostly lived on their estates in Gloucestershire and not in Bucklebury. In the early twentieth century, just before these landholdings in Gloucestershire were sold in 1906, the chief heiress to the estates, Mrs Nina Webley-Parry, moved into the Cottage and it was at this time that she then renamed it 'Bucklebury Manor'.

In the Lloyd George Domesday Survey records that are easily searched on TheGenealogist and which cover all of London, as well as the valuation office areas of High Wycombe, Maidenhead, Reading and Slough in the counties of Berkshire and Buckinghamshire, we can see the IR58 field books for both properties. This reveals that what is marked as the Manor on the map is noted to be only "the site of Old Manor house and grounds" in the accompanying field book records. The Winchcombe descendants finally left the new Manor at the end of the 1950s and at this time it ceased to be the local manor house when Major Derrick Hartley Russell restored the buildings at old Bucklebury House in 1957.

In 2012, what had been Bucklebury Manor, and Bucklebury Cottage before it, together with its grounds were purchased by Michael and Carole Middleton. These are, as many readers will recognise, the parents of Her Royal Highness Catherine, Princess of Wales the wife of HRH William, Prince of Wales. The Middletons had not moved far when they took possession of their new home as it was from another property in the same village that they had come from. Thus, Buckelbury had been where the future Queen and her siblings had spent their childhood and the manor house that had been a cottage is now the parental home of one of the most senior members of the Royal Family. 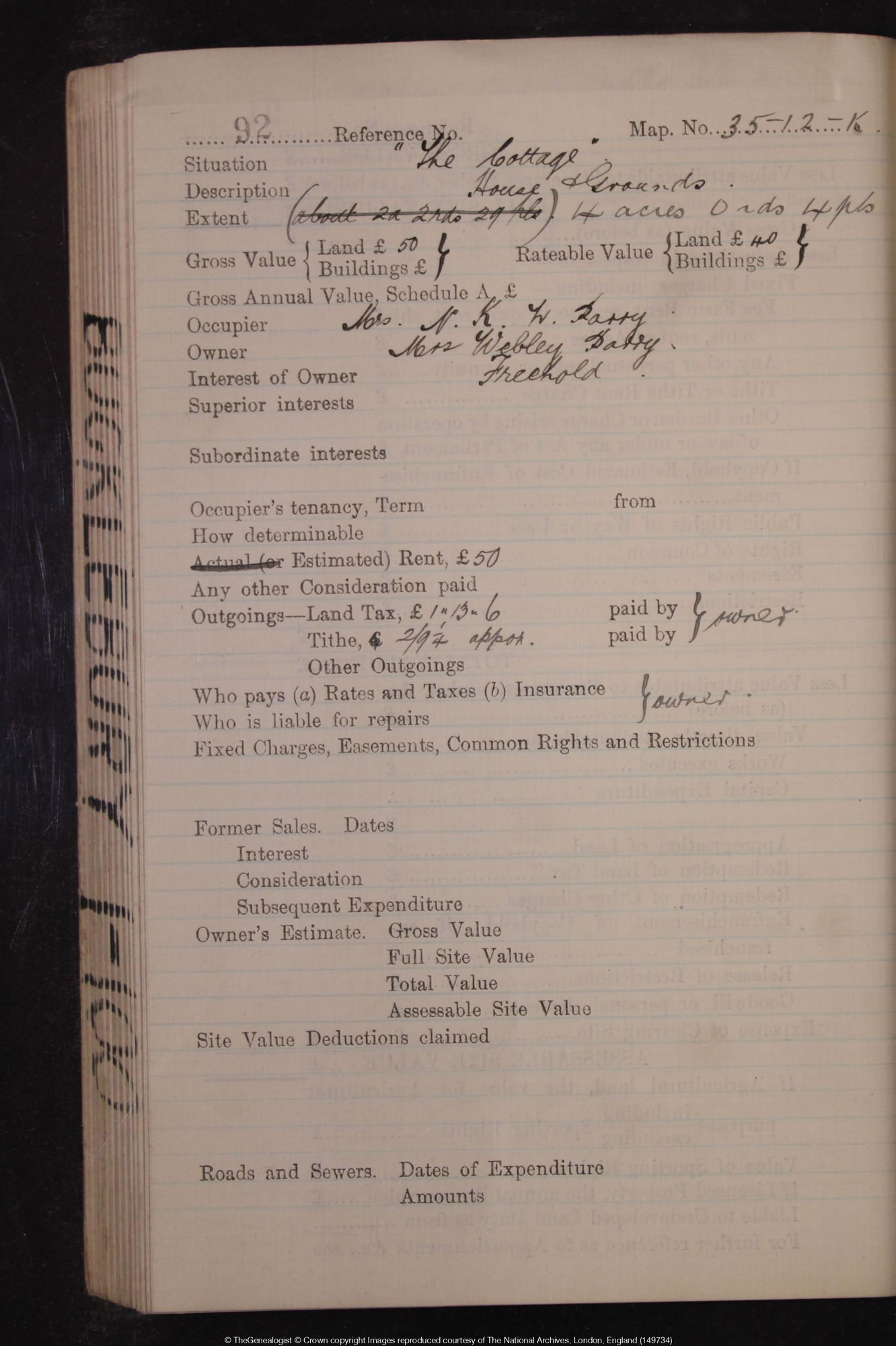 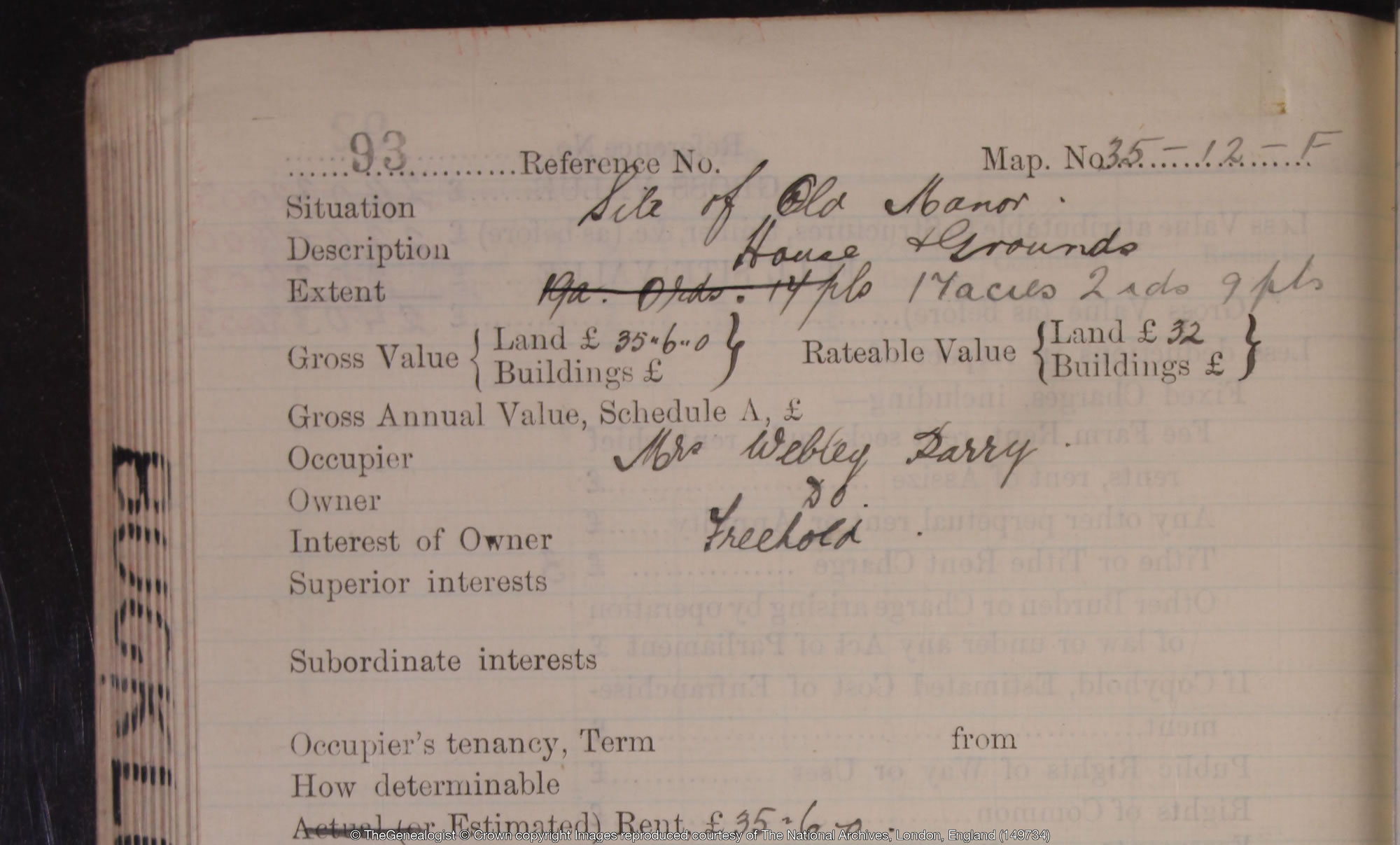 The Lloyd George Domesday records on TheGenealogist are a useful set of records for house and family historians to use because of their descriptions of all types of property from the 1910s. These Inland Revenue Valuation Record Office records can be used in conjunction with others such as the 1911 census to better understand the area where our ancestors had once lived, worked and played. With the ability to search for people and places, as well as use the linked maps, the researcher has access to an extremely powerful way of researching within the IR58 survey of property from 1910-1915. Keep a look out for more releases from these records from TheGenealogist in the coming months.