The Castle Ruin and its connection to the Australian 'King'

A recent stop in the Leicestershire market town of Ashby-de-la-Zouch found me looking at its magnificent ruined castle that is now looked after by English Heritage. The castle I learned was built by William, Lord Hastings, who had been a favourite of Edward IV, after 1473. Erected on the site of an older manor house with two large towers and some smaller buildings it had begun to go up by the year 1483, when Hastings met his untimely death. The noble lord was summarily executed by Richard, Duke of Gloucester as Hastings resisted the Duke's ambition to take the throne away from the young King Edward V. It had been that year that King Edward IV died and left his kingdom to his young son, Edward V, aged 12.

We all know the story of the young king, along with his brother, sent by thier uncle to accommodation at the Tower of London and these two are forever remembered as the Princes in the Tower who are suspected to have been murdered there. Richard, Duke of Gloucester, had ambitions on the throne and Lord Hastings was unwilling to support the deposition of Edward V and the result was that Richard summarily had him executed that June. Having got the obstructions out of the way Richard then pressed ahead with his own coronation. 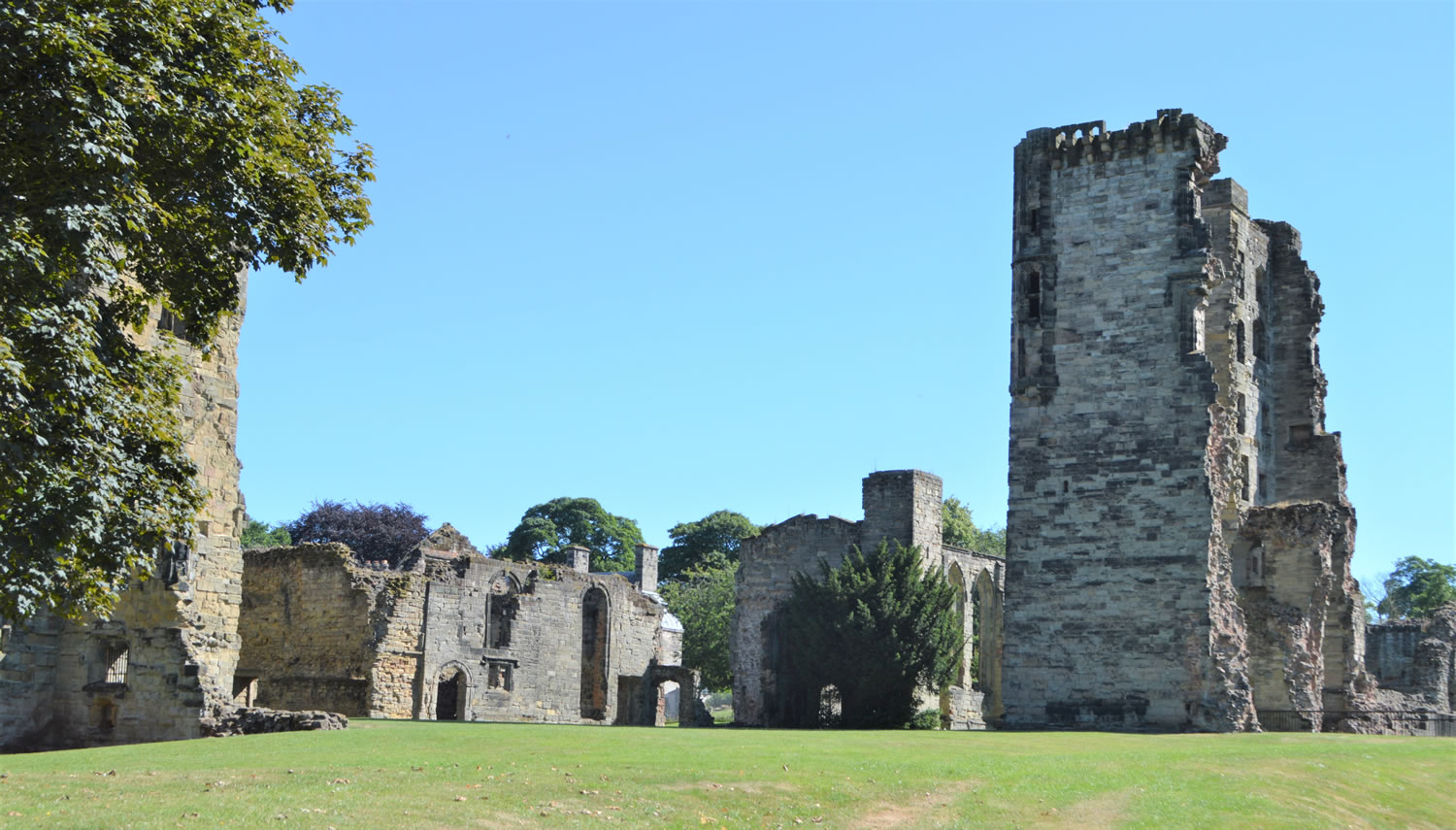 With Hasting's death the partially constructed Ashby de la Zouch Castle and other estates were then restored to his widow, Katherine Neville. The Hastings family would make use of the castle for several generations to come, developing the gardens and playing host to royal visitors. In the English Civil War of the 1640s, however, Henry 1st Baron Loughbrough became a Royalist commander in the Midlands. Choosing to base himself in the castle at a time when most of surrounding Leicestershire was for the Parliamentary cause he was forced to surrender the castle after a long siege. A fresh rebellion occurred in 1648, this time leading Parliament to slight the castle, or deliberately damage it in order to prevent it from being used militarily. The two towers were badly damaged by Parliament's army with gunpowder and undermining of the structure. The Hastings family moved their main residence a few miles away to Donington Hall, though parts of the remaining castle were turned into a new house and continued to be used by members of the Hastings family for many years.

We can use the Peerage, Gentry & Royalty Records on TheGenealogist to see where this Royalist Military Commander fitted into the Hastings family. For this we will begin by consulting the 1619 Leicestershire Visitations.

The visitation was taken in that year by William Camden, Clarenceux King of Arms. His deputies were Sampson Lennard and Agustine Vincent. We access this particular record from the Search page on TheGenealogist and scroll down to the relevant section entitled Peerage, Gentry & Royalty and use the dropdown menu to select: Visitations. This allows us to choose from a number of Browasable Books and here we select the relevant Leicestershire Visitations book and use the Search box to find a possible entry in the volume.

With this search we are able to find a number of Henry Hastings, but the one that became Baron Loughbrough and who had based his Royalist command in the castle at Ashby de la Zouch and thus was why the building was slighted we can find at the bottom of page 73. He is listed as Henricus and is the younger brother of Fernando and a sibling of Alice. Their parents are Henry who was the Earl of Huntingdon and Lady Elizabeth daughter of the Earl of Derby.

Tracing back up the line we are able to find William Hastings at the top of this pedigree. This person was, of course, the original builder of the castle at Ashby and who was unfortunate enough to have lost his life when summarily executed by Richard, Duke of Gloucester. The reason for his death was as punishment for resisting the Lord Protector's ambition to usurp King Edward V, the Duke's own young nephew. This one pedigree, spread over two pages in the book, allows us to trace those members of the Hastings family who saw the construction of Ashby de la Zouch castle begin and also those who saw it destroyed and reduced to ruins. 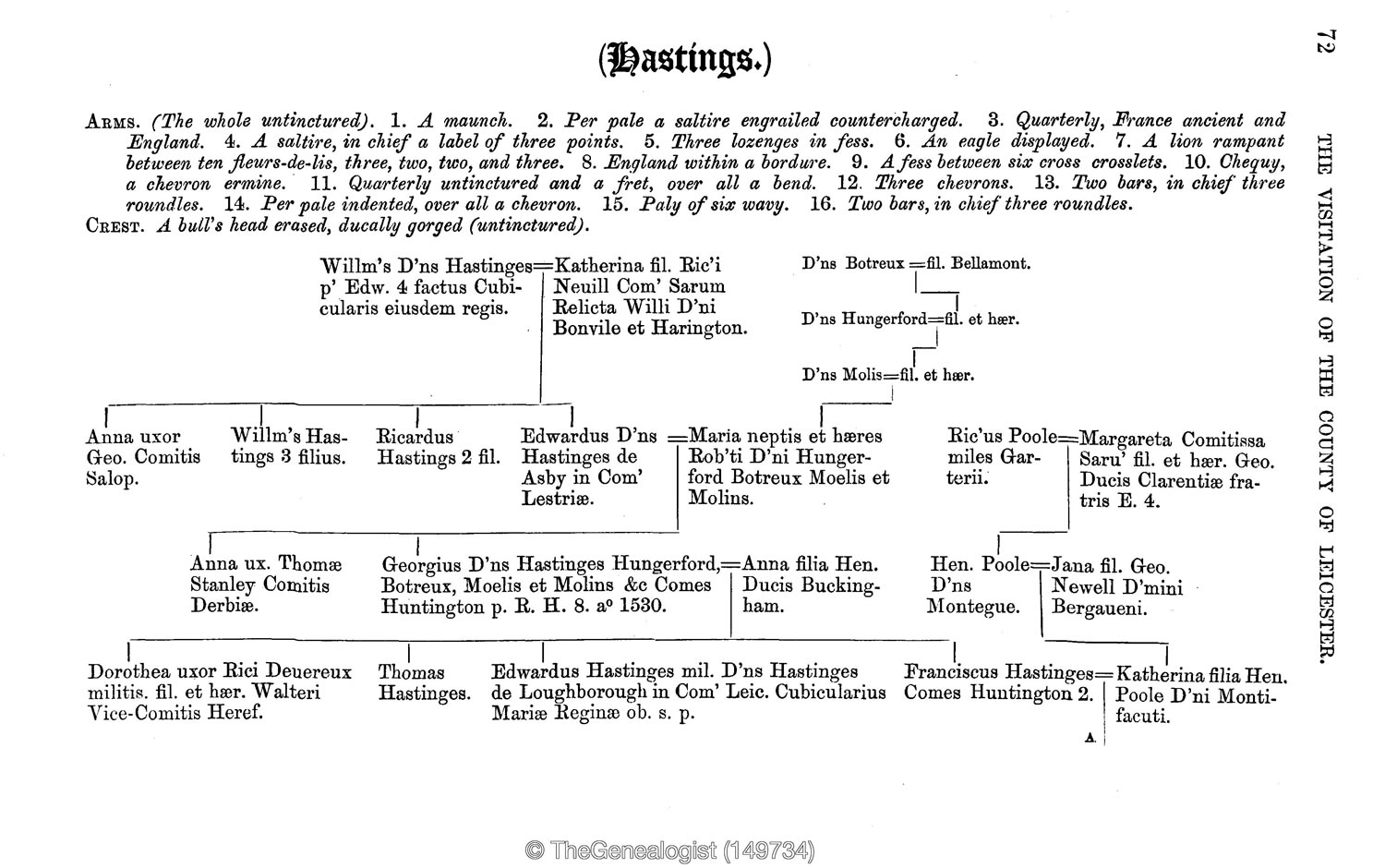 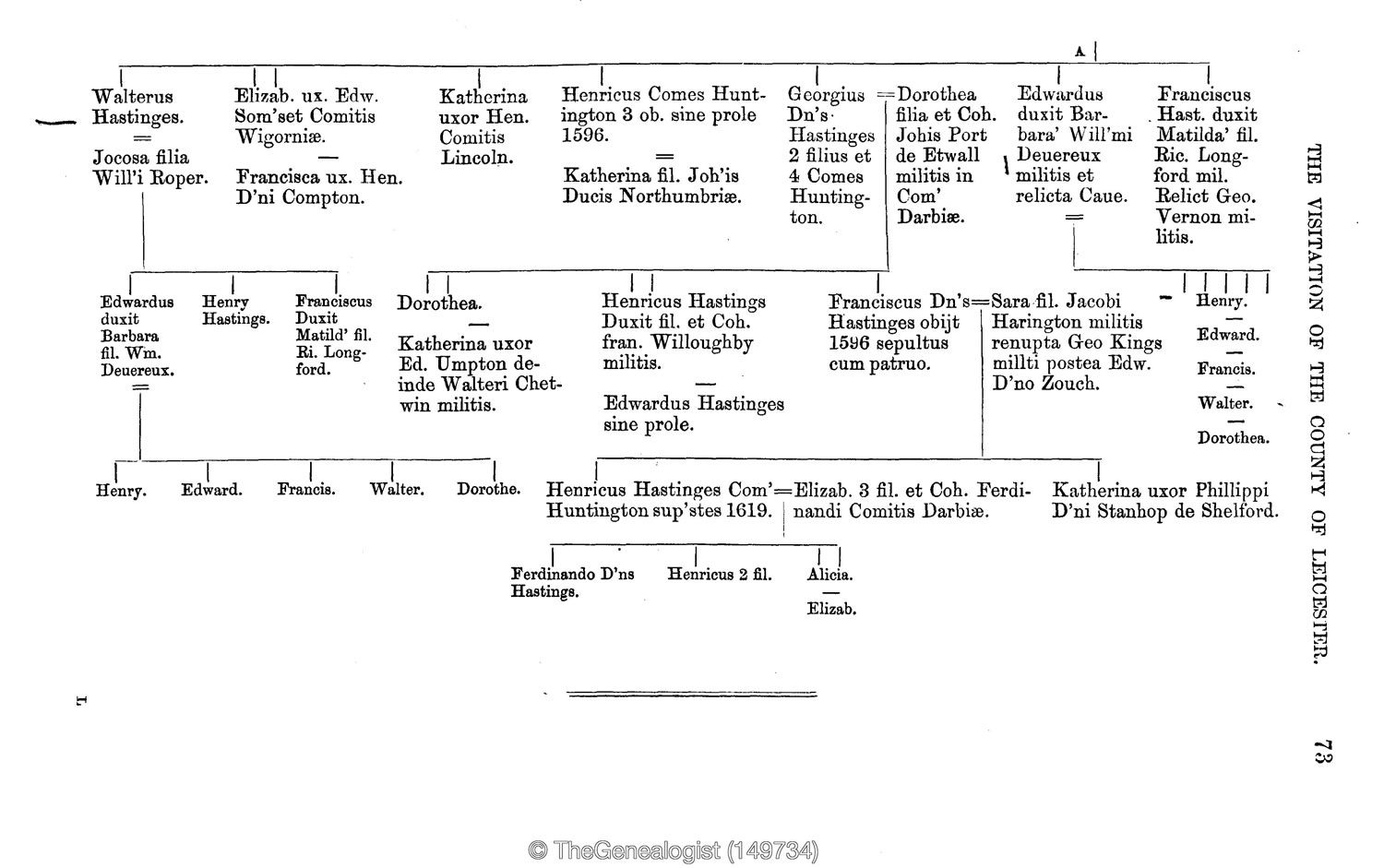 Once we have opened the book in the viewer we are able to also navigate through the volume by using the bookmarks to the left should we wish. Here we see an image of the first page though we could choose to read the preface, the Errata, view the Names of Quarterings and Impalements Tricked in the Visitation of Leicester 1619, or browse through the list of pedigrees or any other page that takes our interest. 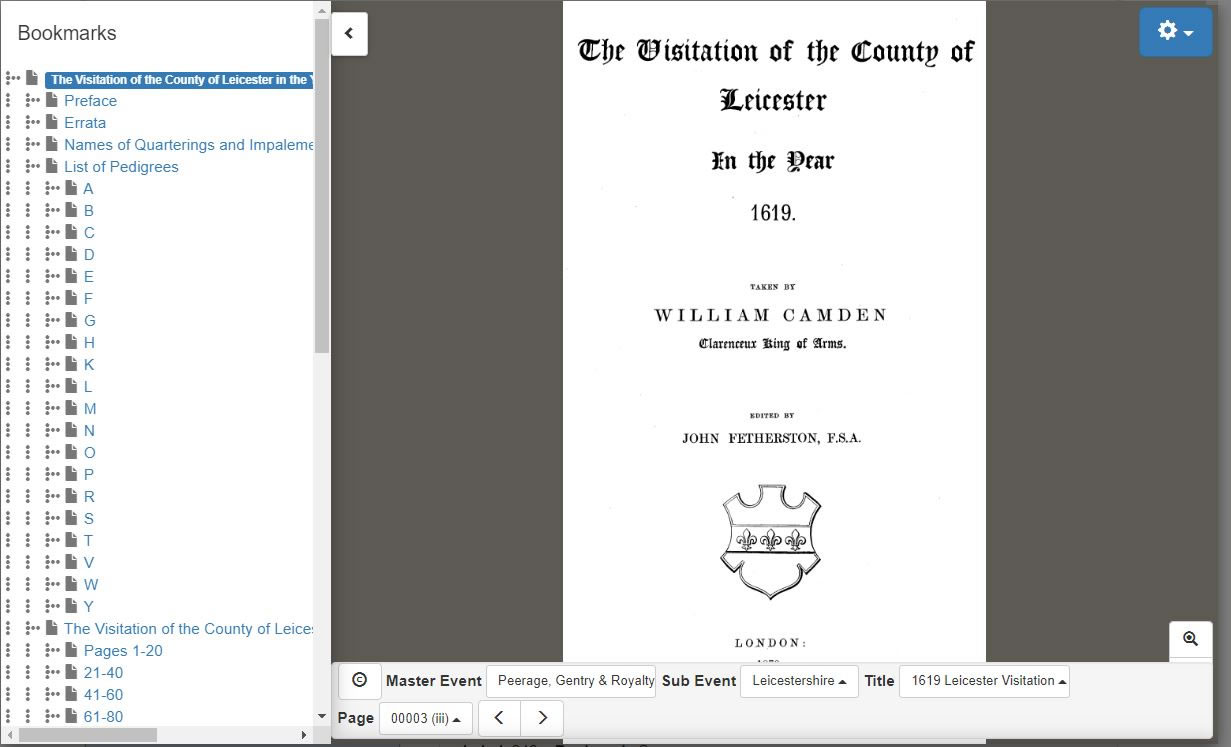 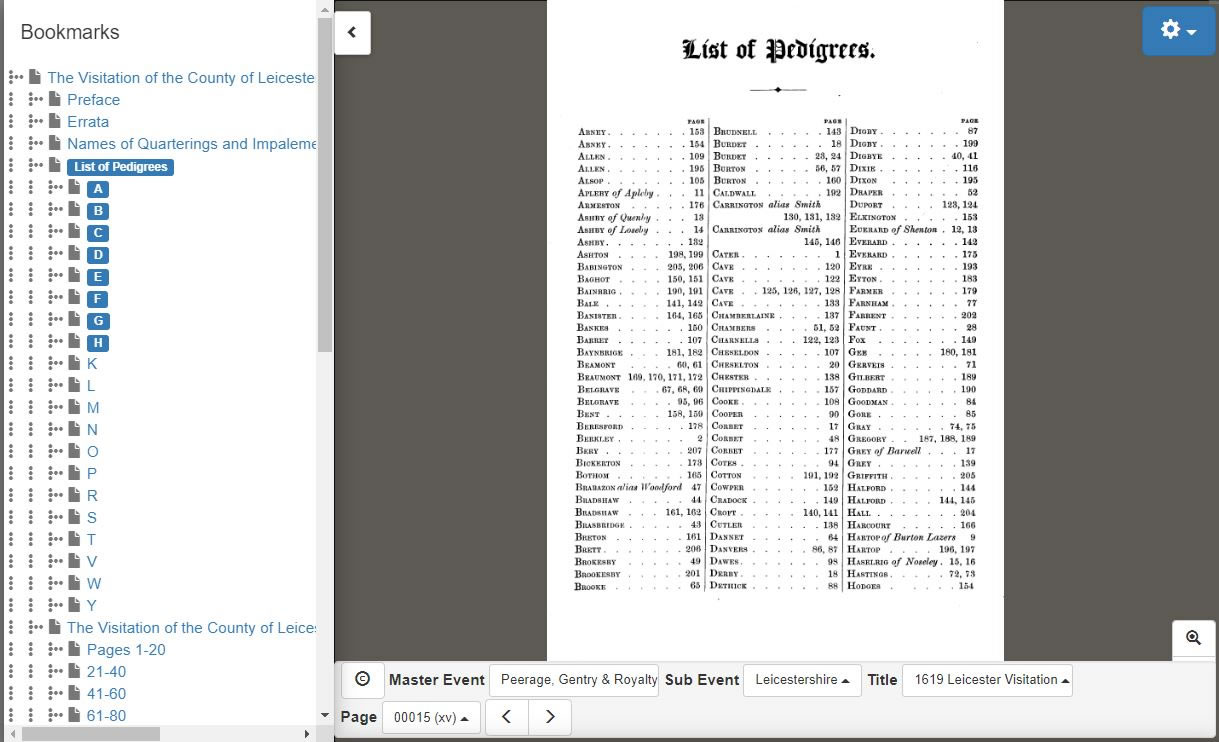 The Visitations of the County of Leicestershire 1619

These browsable books are not the full extent of the Peerage, Gentry & Royalty Records on TheGenealogist. If we were to search over all the other records in this section then we are able to find how the Hastings family are related to the last of the Plantagenets, Margaret Countess of Salisbury. Her unfortunate end came in May 1541 when she was beheaded on Tower Hill, but by tracing the line down to her granddaughter the Honourable Katherine Pole we note that she married Francis Earl of Huntingdon in 1532. 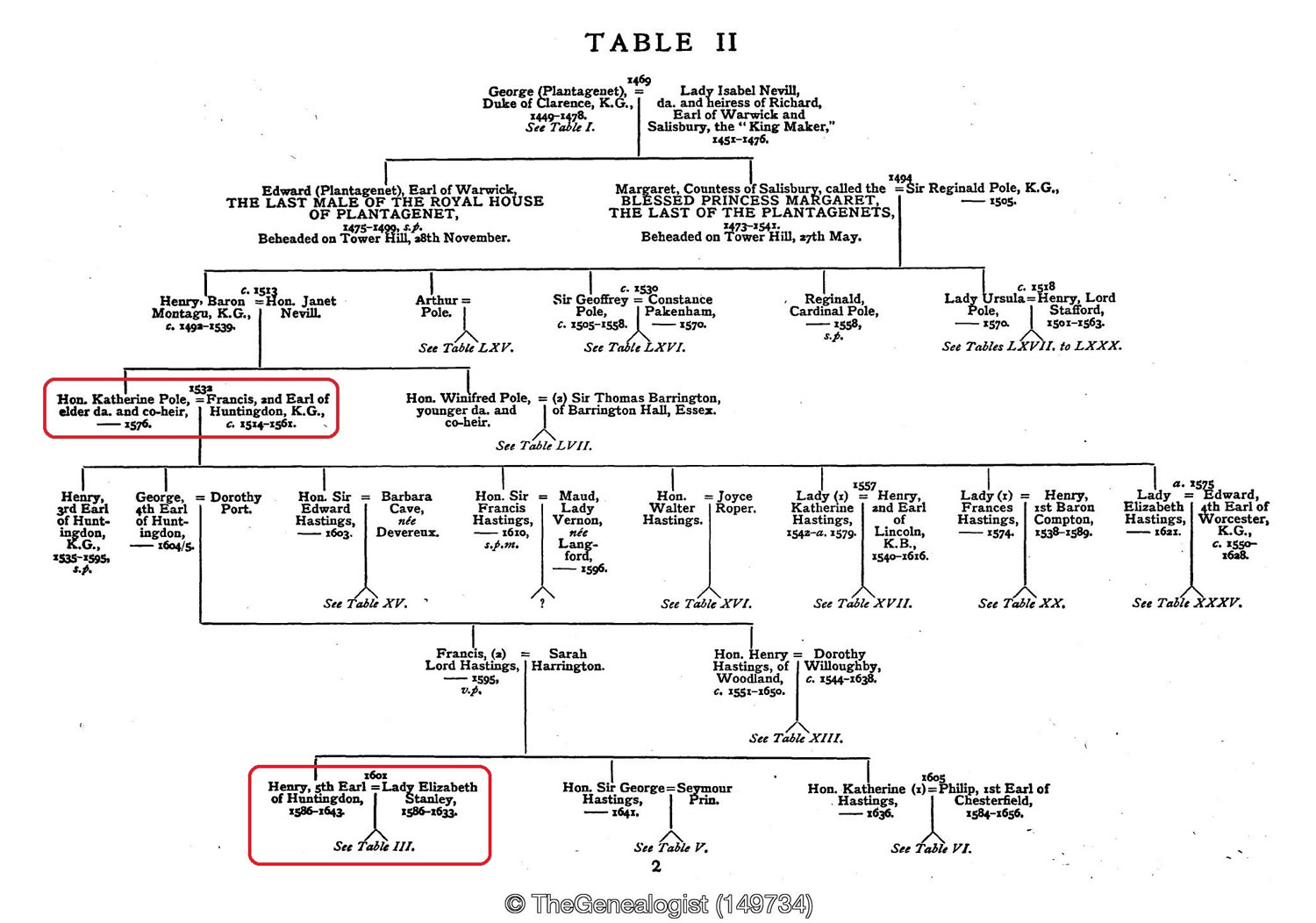 Another connection that the Hastings have to the throne of England is via Lady Elizabeth, Countess of Huntingdon who was born and baptised on 6 January 1588, in Knowsley, Lancashire. Lady Elizabeth was the third and youngest daughter, and co-heir of Ferdinando Stanley, 5th Earl of Derby, Lord of Mann, and Alice Spencer (4 May 1559 -January 1637). Lady Elizabeth Stanley married into the Hastings family in 1532 and we are able to see her relationship detailed in a copy of The Royal Lineage of England also to be found in TheGenealogist's Peerage, Gentry & Royalty Records. Using this record we see Elizabeth's marriage to Henry Hastings, 5th Earl of Huntingdon. We are then able to trace her descent as the great-great-granddaughter of Mary Tudor, Duchess of Suffolk, who was at one time the Queen of France until the death of her first husband Louis XII. The entry in The Royal Lineage of England on TheGenealogist also reveals her to be the younger sister of King Henry VIII.

After the death of her grandmother, Lady Margaret Clifford in 1596, Lady Elizabeth then became third in line of succession to the English throne. Upon the death of Queen Elizabeth I in 1603, Elizabeth and her older sisters, Anne Stanley, Countess of Castlehaven, heir presumptive, and Lady Frances Stanley were, however, passed over in favour of King James VI of Scotland, who was descended from King Henry's elder sister Margaret Tudor. 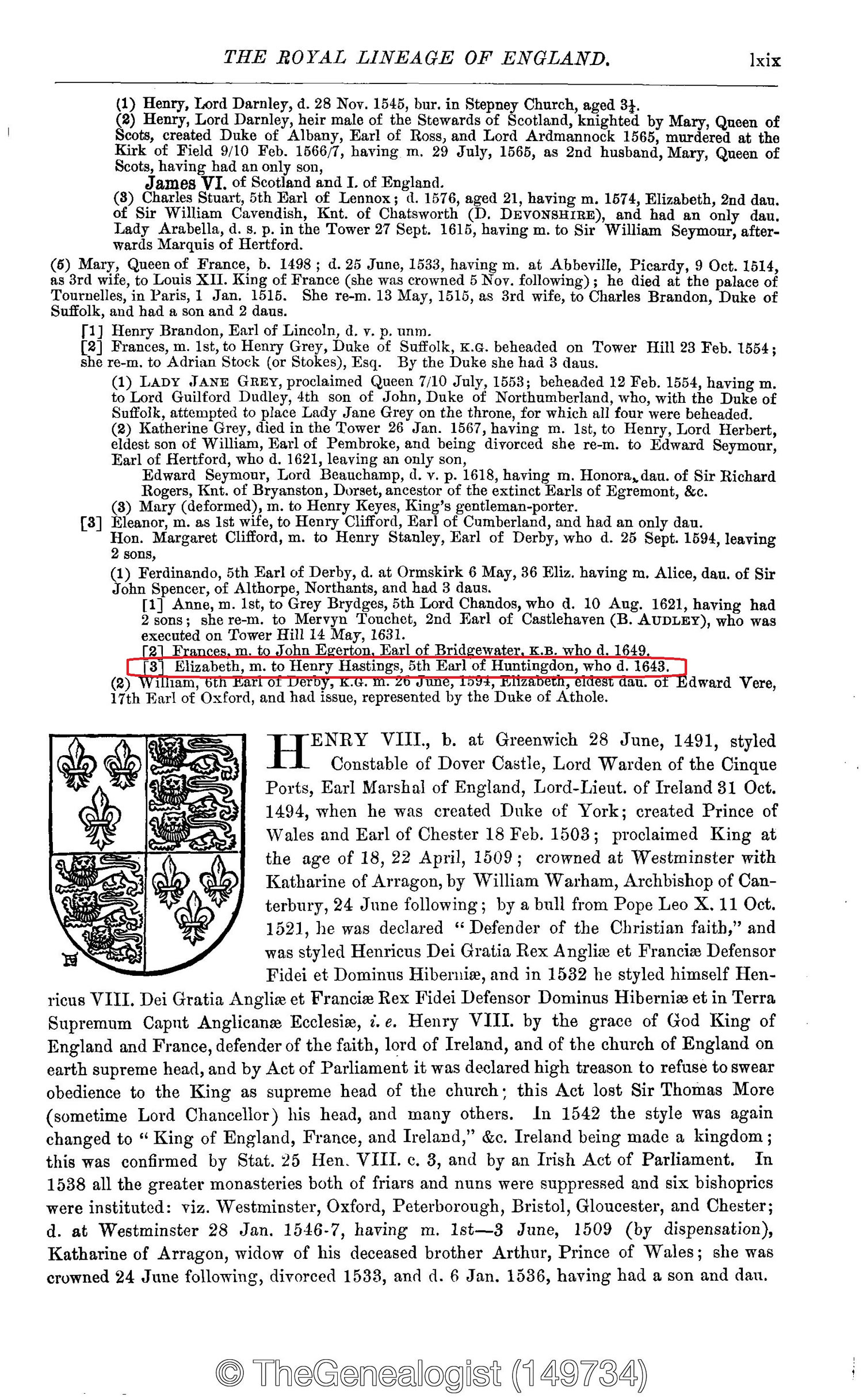 The Peerage Baronetage Knightage of the British Empire 1880

This fascinating link came to a wider audience in 2004 when, Britain's Real Monarch, a documentary broadcast on Channel 4 and presented by Tony Robinson repeated the claim that an Australian Republican, Michael Abney-Hastings, as the senior descendant of George Plantagenet, 1st Duke of Clarence, was the rightful King of England.

The programme based its argument on an historic claim that King Edward IV was illegitimate and should not have become king. The theory recounted was that the prince was born to Cecily, Duchess of York, while her husband, Richard Plantagenet, 3rd Duke of York, was fighting elsewhere in France and the putative father was actually an English archer. A number of historians, however, have since challenged the conclusions reached by the programme on several grounds.

That aside, the premise that Edward had been illegitimate would mean that he and his descendants would have had no valid claim to the throne of England. From this flows the idea, as the TV programme suggests, that the 'real' monarchs were the heirs of his legitimate brother George, Duke of Clarence. At the time of its broadcast, this line was represented by Michael Hastings, who had emigrated to Australia in 1960, married, fathered five children, and lived in Jerilderie, New South Wales, until his death in June 2012 and who was The 14th Earl of Loudoun, though he did not use his title. 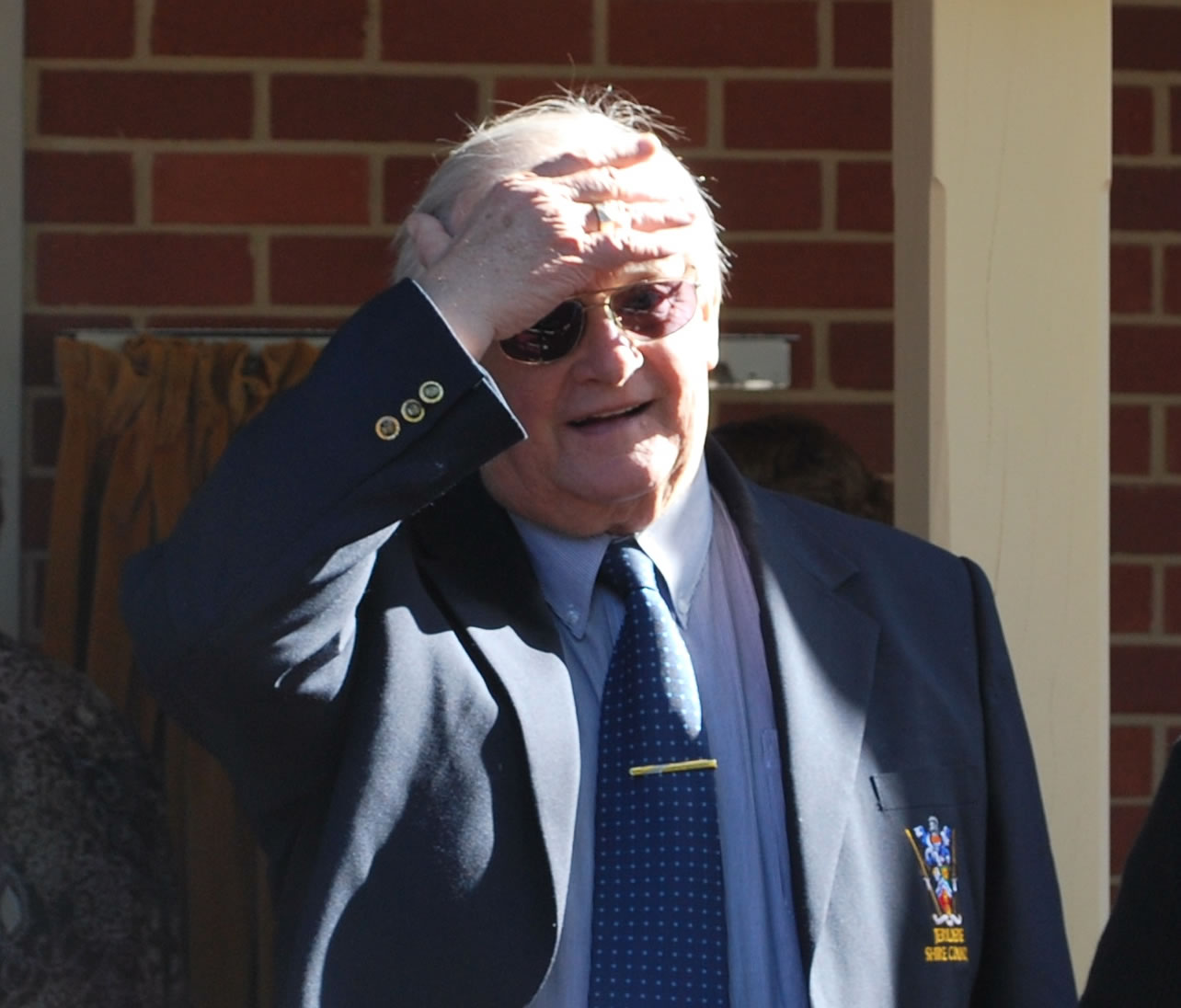 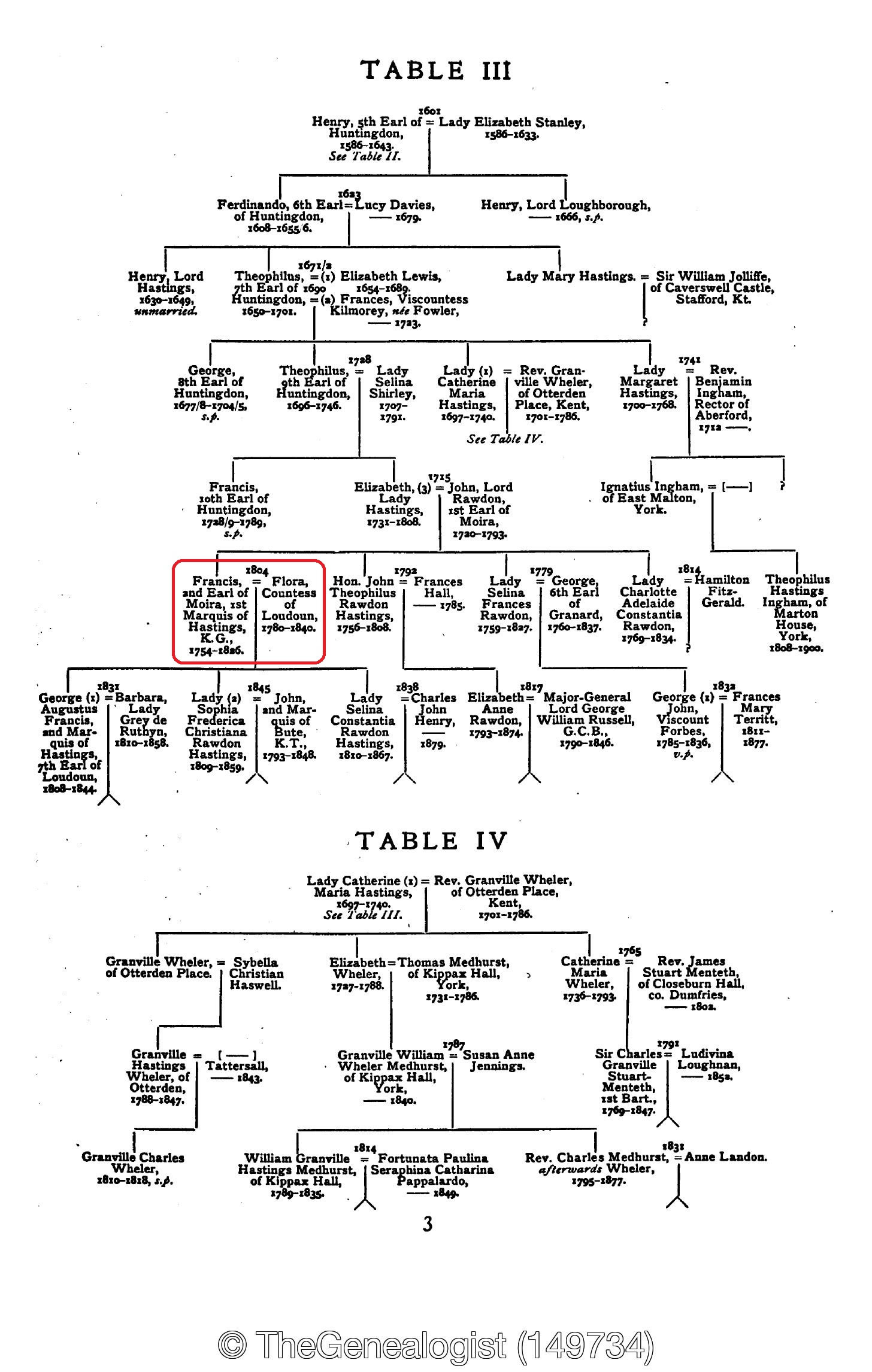 The Peerage, Baronetage Knightage of the British Empire 1880 reveals the connection to the Earldom of Loudoun

TheGenealogist's fulsome collection of Peerage, Gentry & Royalty Records have been very useful in understanding the Hastings family through the centuries and so have added greatly to the background of the history of an interesting set of castle ruins in the centre of England.