The period between 1910 and 1915 saw the survey of the country by a government that was seeking to raise money in order to pay for newly proposed benefits for poorer members of its society. The survey that it undertook was as a result of the 1909-1910 Finance Act which set out to charge a levy on land that was based on increased value of the land and so was called an 'increment value duty'. The principle being that any increased value of the land as a result of public money spent on communal infrastructure should be gathered. To do this the Valuation Office was set up by the Inland Revenue in 1910 for England and Wales (and in 1911 for Scotland) with the purpose of making valuations of property for Estate Duty purposes. The project required 118 valuation districts to be established in England and Wales, each of which was in the charge of a district valuer and comprised of a number of income tax parishes. Using this set up the work of the survey was organised and carried out and began creating records of land and property and marking them on detailed mapping of the time.

This means that if you want to find out about the value, use, extent or ownership of an ancestor's property or piece of land in England or Wales around the beginning of the 20th century, then these IR58 records from the Valuation Office Survey are a gem. The survey, which was carried out between 1910 and 1915, provided a unique snapshot of land and property in the Edwardian era. It asked its worth, how it was used and by whom. The unintended consequences of this government ordered survey is that, looking back from our position in the 21st century, it has inadvertently provided us a great picture of society in Edwardian times for us to use in researching our family's story.

The IR58 records, also known as the Lloyd George Domesday Survey, are being digitised by TheGenealogist from the original records in The National Archive adding the benefit of being made searchable and also locateable on detailed maps on the powerful Map Explorer™. With the ability to look at clear scans of the pages of the field books often these will reveal what type of property an ancestor had lived in or owned. This can tell us the property's size and state of repair, as well as the details of the house or land's valuation all of which can be useful if you are researching where a forebear lived in the 1910s.

Sisters of the Cross and the Horse Patrol

While the project to put these records online is a massive one, TheGenealogist has now completed releasing online all the records from The National Archives for London and North Buckinghamshire. It is in one of these areas that we can discover the records of Carshalton House on Pound Street. The property, now St Philomena's Catholic High School for Girls catering for girls aged 11–18, lies a short distance to the west of the centre of the small town of Carshalton in the London Borough of Sutton. The Lloyd George Domesday Survey records identify its location as in the ward of Carshalton and the Valuation office of Sutton for the purposes of the IR58 records. 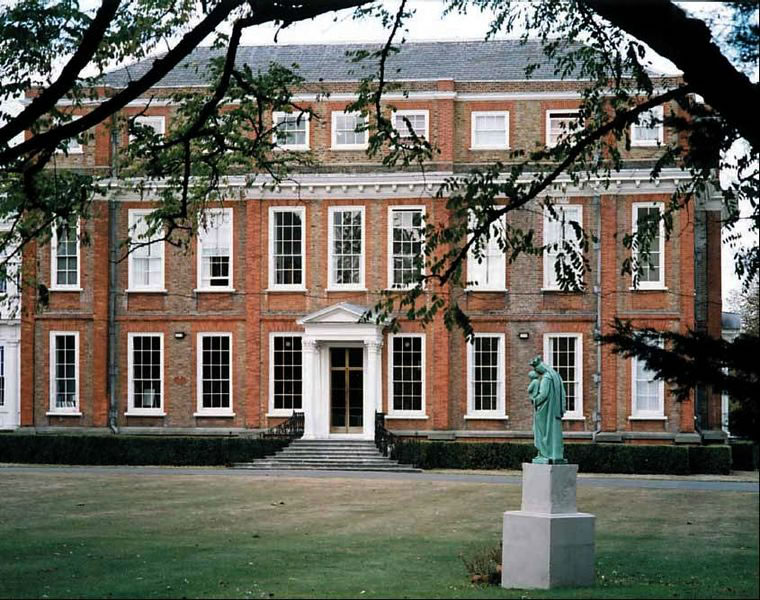 In the period before the First World War, and when the Lloyd George Domesday Survey was being recorded, it had already become a convent school in the ownership of the Trustees of the Daughters of the Cross. This religious congregation of nuns had bought the property in 1894, a fact that is recorded in the IR58 field book in which it appears. The entry tells us that its purchase had been for a consideration of £12,000 in 1894. The nuns held the freehold and were owners and occupiers of what is described as an "old brick Georgian house" in the Lloyd George Domesday Survey field book. We can also see that the sisters had put up newer buildings in the grounds that included a dining room, dormitories, a great hall, gymnasium and a swimming bath and other school facilities.

This particular record includes a useful bonus extra for a researcher wanting to understand the layout of the property. The surveyor had thoughtfully included a pencil sketch plan of the school as he had seen it. From this we are able to understand that the original house made up a small part of the establishment as there was the addition of a number of buildings including a Convent, where the nuns lived, and a Chapel in the grounds. 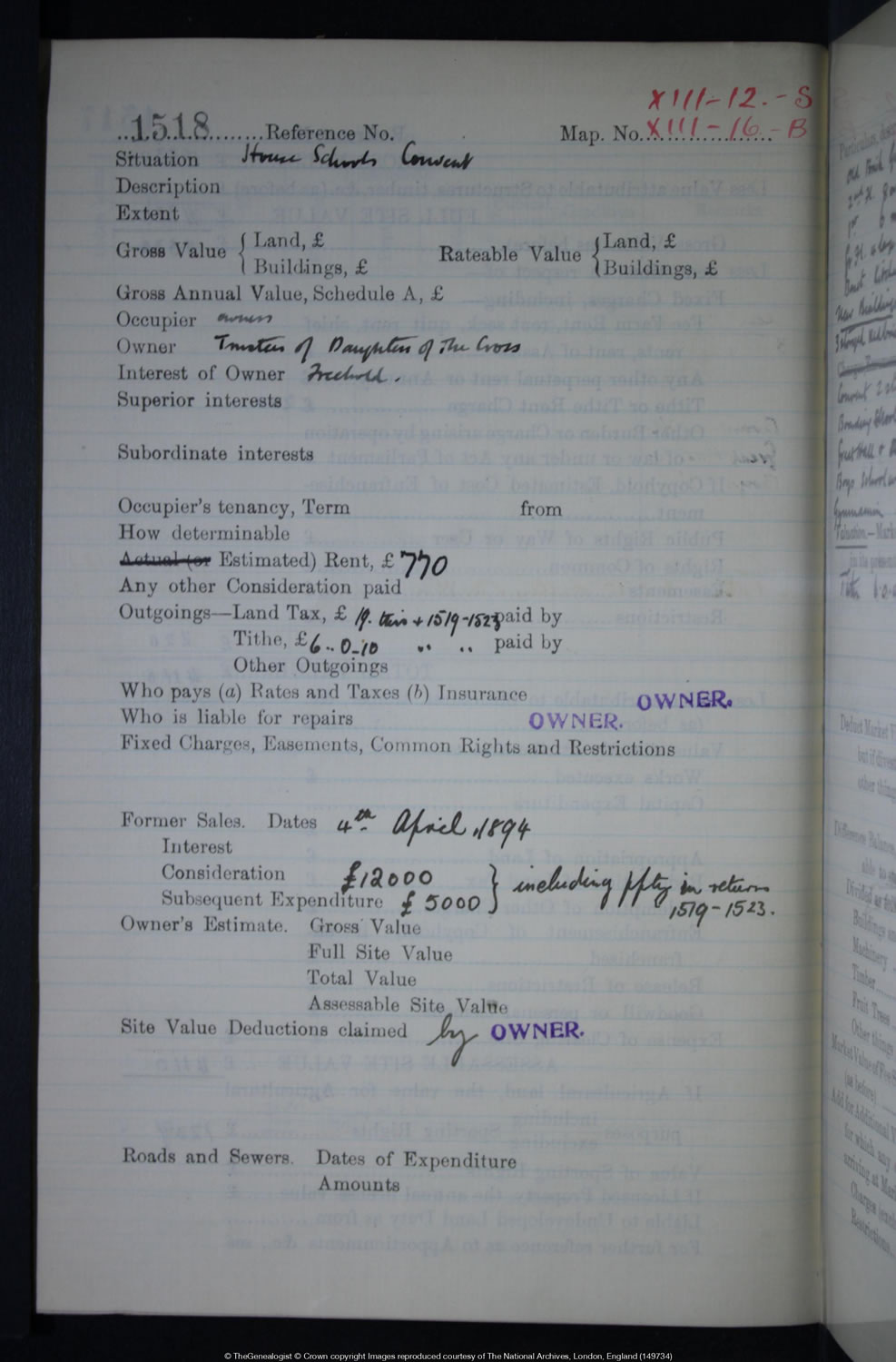 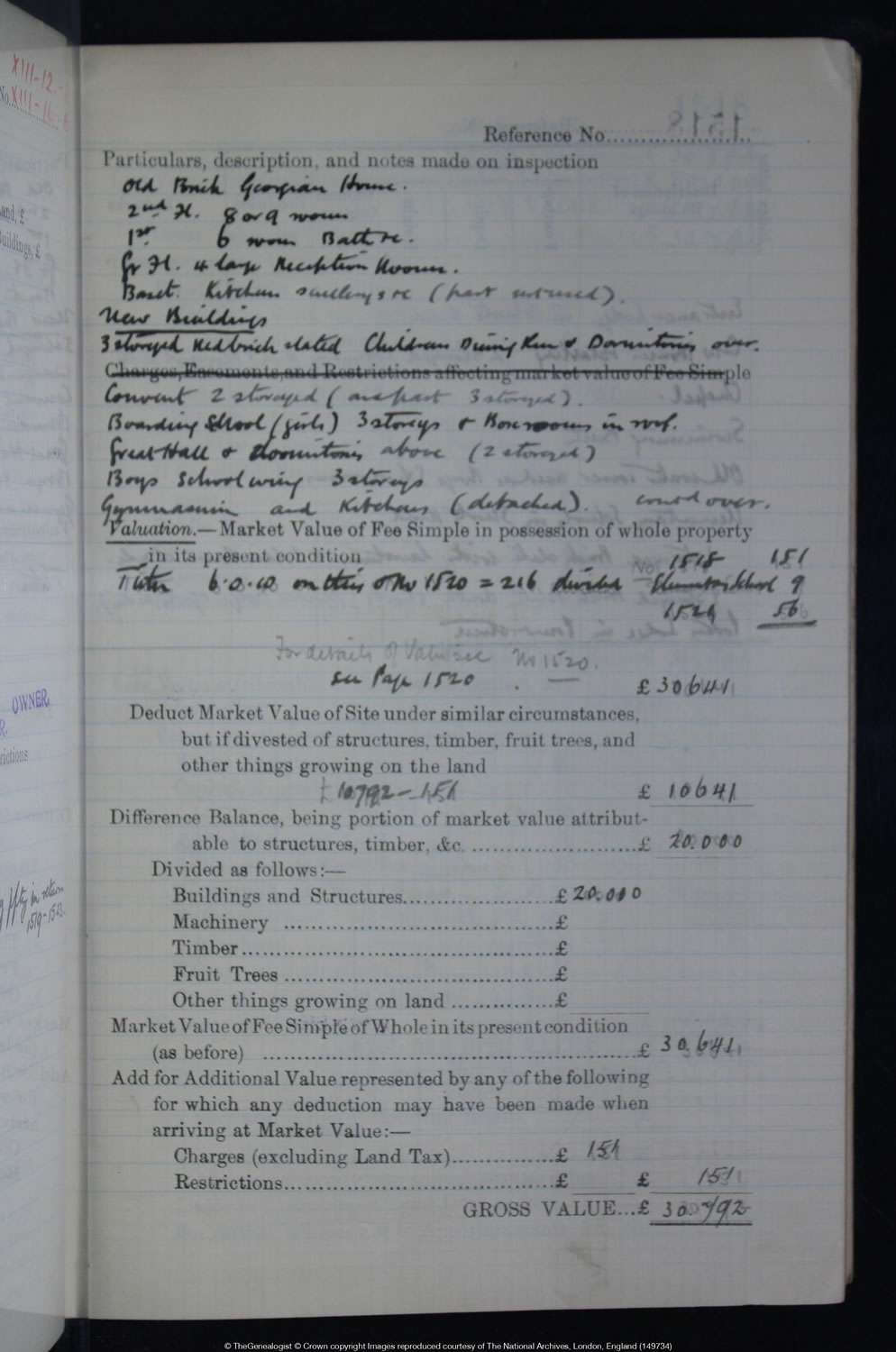 Carshalton House, Pound Street in the IR58 field book and details of the property as recorded in the Lloyd George Domesday Survey A search online for other mentions of the history of the main building reveals that Carshalton House had at one time been a grand manor house built in the early eighteenth century by Edward Carleton. In its time it had also been the home of the noted physician, Dr. John Radcliffe until his death in 1714. Other owners followed including Sir John Fellowes, Sub-Governor of the South Sea Company; Lord Anson, an admiral; and Philip Yorke, 1st Earl of Hardwicke, who was a Lord High Chancellor. By the 1910s, however, the order of nuns known as the Daughters of the Cross had been the owners of the house and land for at least a decade and a half. 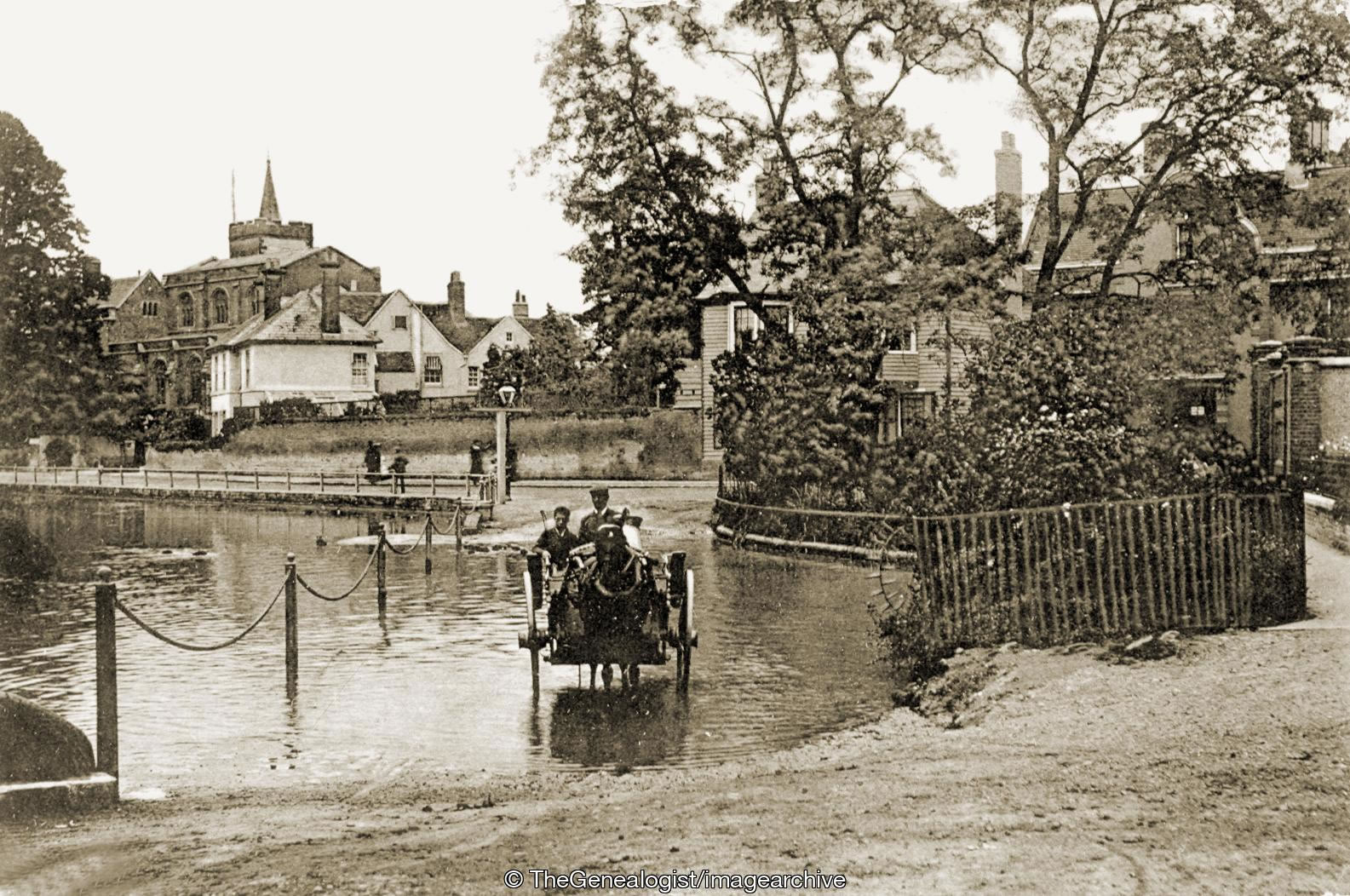 Nearby is Carshalton Church and Pond from TheGenealogist's Image Archive

The neighbours with two cells for prisoners!

By clicking through to the linked map we are able to use TheGenealogist's Map Explorer™ with its suite of georeferenced maps that range from historical to modern plans. Selecting the OS map that had been used at the time of the Lloyd George Domesday Survey we see the lay of the land in the neighbourhood and can then select to view other properties by clicking on their red plot pins. These markers correspond to the plot numbers that had been annotated on the large scale maps used by the Valuation Office at the time of the survey. The relevant field book reveals the names of the owners and occupiers together with information on what type and size of property each entry had been. In this part of Carshalton there are small brick cottages with slate roofs, semi-detached houses, some of which have a shop on the ground floor. We can also find details of farms in the area and see some of the larger houses that were owned by wealthier members of society as well as see a council owned recreation ground. At plot 1524, there is a building described in the linked field book as being an "oldish yellow brick and slate premises"; we read that it has 2 rooms and 2 cells! If we peruse the map we immediately see that it was marked as a Police station, in brackets "Horse Patrol". For this reason it comes as no surprise that the surveyor has noted in the records that there is a "small brick and slate stable at the rear". We can wonder if its close proximity to the convent school gave the nuns reassurance in their large grounds to its west. Allowing our imagination to run away with itself we may wonder if there had been any calls from the convent that resulted in a policeman being despatched at a gallop! 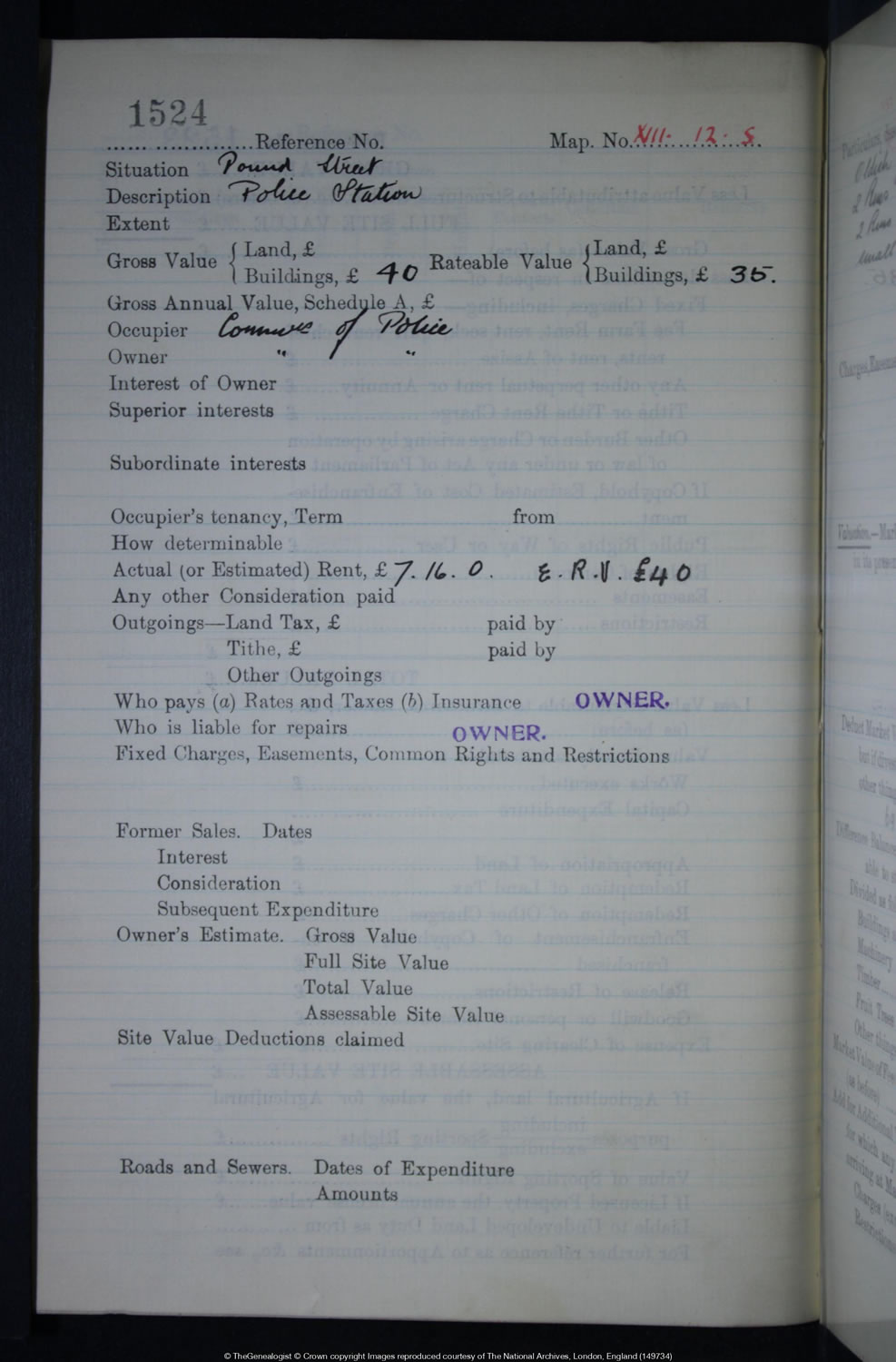 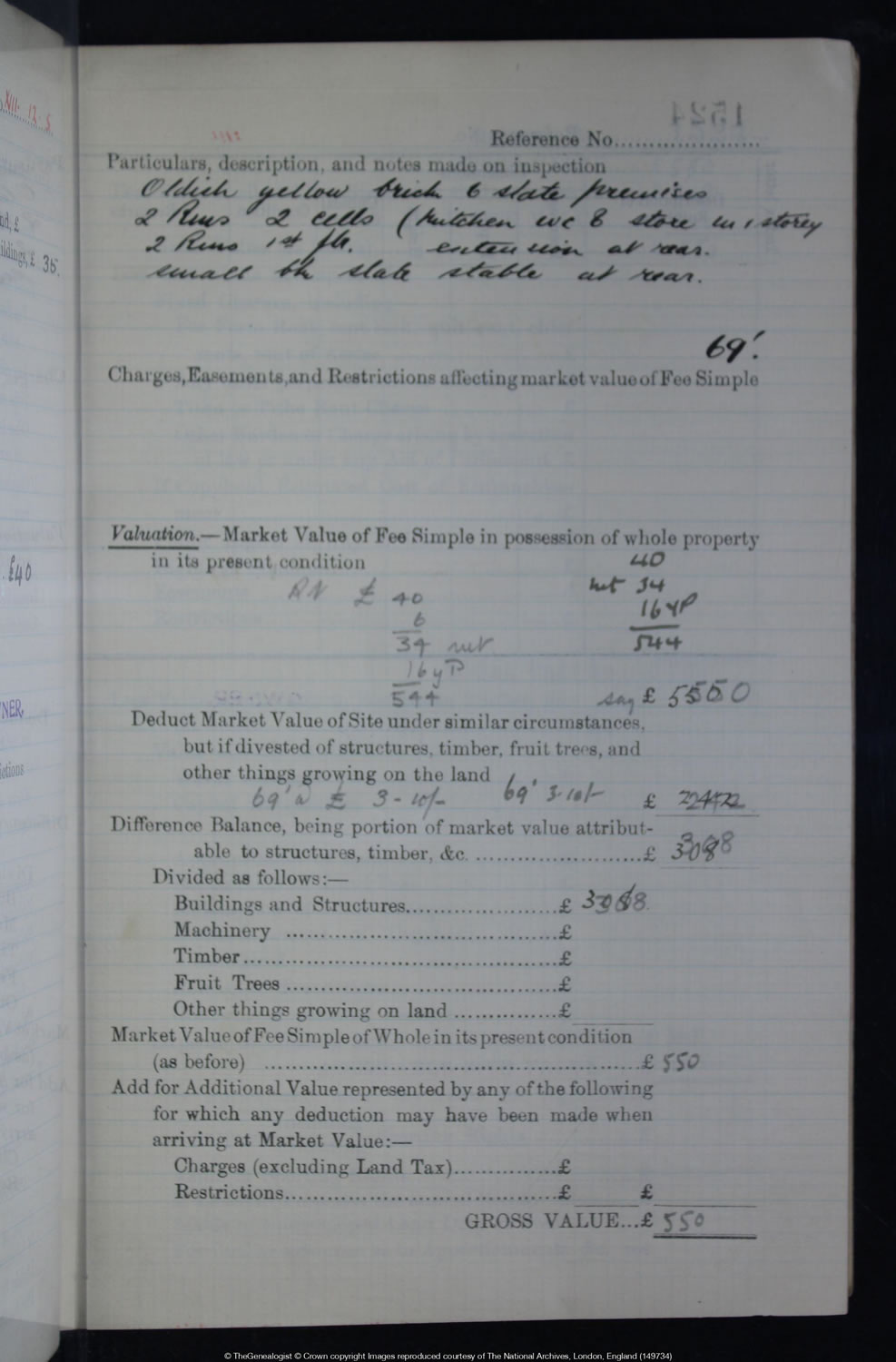 The Lloyd George Domesday Survey with its descriptions of all types of property in the 1910s can be used alongside other records such as the 1911 census to better understand the area where our ancestors lived, worked, played or went to school. With the potential to search for people and places, as well as use the linked maps, the house or family historian has access to an extremely useful tool for researching within the IR58 records. With the completion of the densely populated London area, where many of our late Edwardian ancestors would have been drawn to live, the project will now begin releases for other parts of the country in the months to come.