With the linking of Tithe Maps for the counties of Gloucestershire, Hampshire, Herefordshire, Nottinghamshire and Sussex to Map Explorer™ TheGenealogist has completed adding its exclusive National Tithe Record Collection for all of England to this powerful tool.

This milestone means that all of the available surviving English tithe maps can now be used in conjunction with georeferenced maps from other periods, including modern satellite and street maps. The Map Explorer™ allows the researcher to switch seamlessly from identifying an ancestors' plot of land on the Victorian Tithe map to viewing its exact coordinates in another era. With a choice of modern maps to pinpoint the plot today, or to see it in other historical periods, the researcher is able to explore the changing landscape of the area in question.

As an example let us consider a farmer named William Drudge. We will look at how the tithe maps, overlaid georeferenced maps from other times, can be of use to discover where our ancestors like Farmer Drudge had once lived and to see where his house and fields lie under the modern urban scene of today.

From searching the 1841 census we have been able to discover that William Drudge farmed on the Isle of Wight where he lived with his family at Kingston Farm in the parish of Whippingham. Having identified this address from the census we may be curious to know how big his farm was and in what area it had been. To find this out we can turn to the tithe records, especially as the Tithe Survey of this area was carried out in 1844, just three years after the census had been taken. At this time the Isle of Wight was part of the County of Hampshire and so it is the tithe maps for this county that we will turn in this case study. 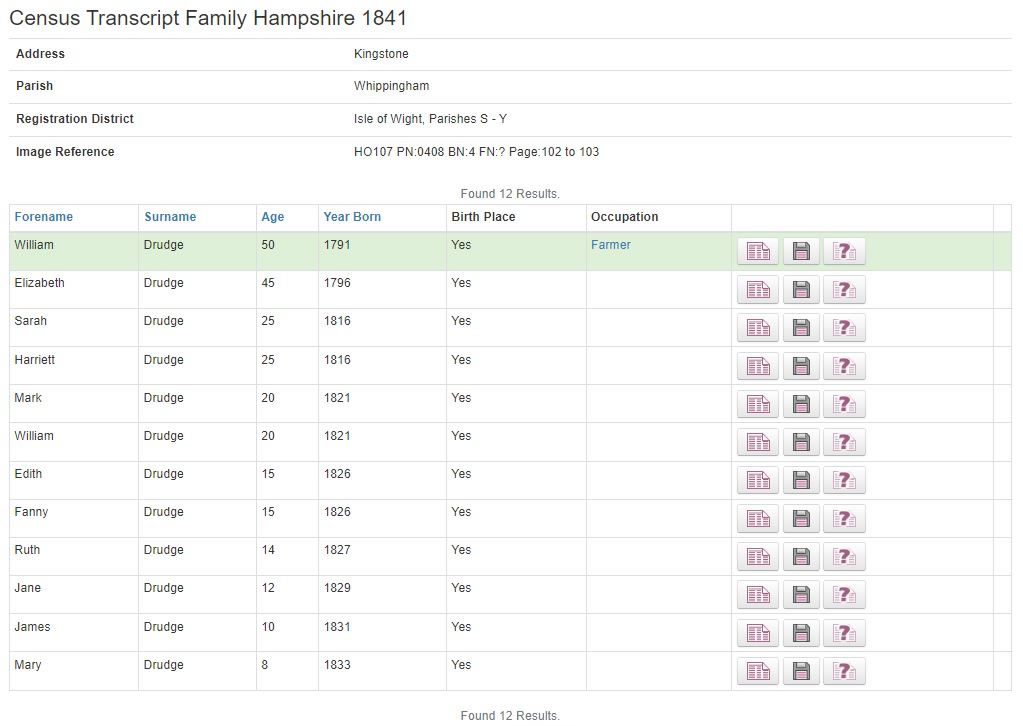 To do the next part of the search we will use the Master Search on TheGenealogist selecting Landowner & Occupier as the Record Collection. We then enter William Drudge in the name fields and use the place, Whippingham, Isle of Wight as our Keywords. 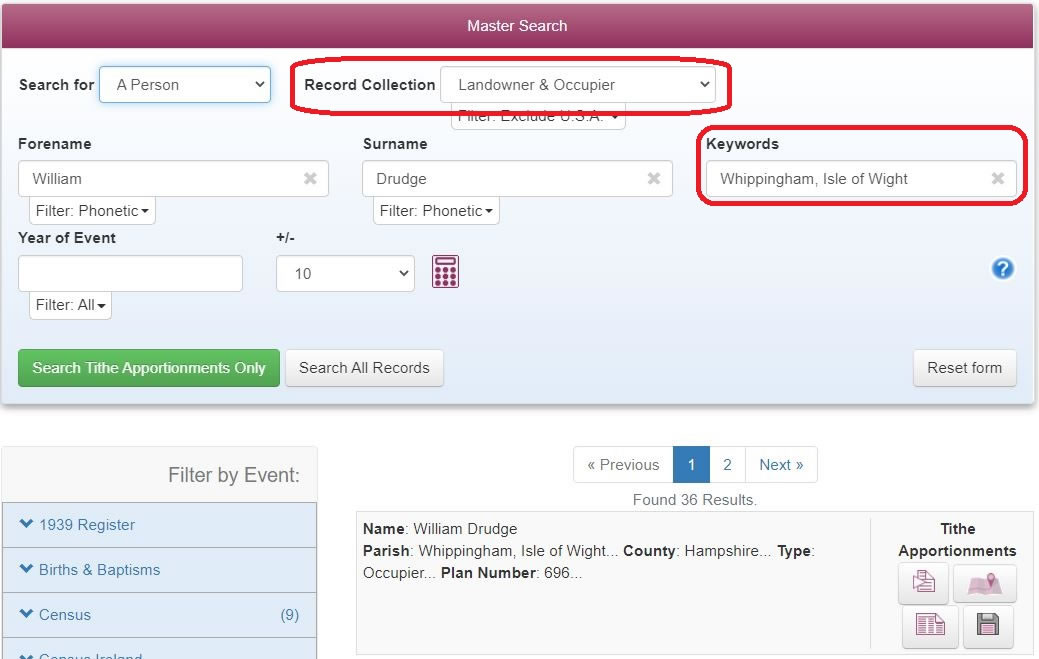 This search returns 36 results and by opening each record up we are able to discover that William Drudge is listed as the occupier of a substantial number of plots in the parish. For the first 17 of these returns his landowner is none other than Queen Victoria, which seems very fitting for a look at Victorian land ownership records. The other plots, we learn, he leases from Lord George Seymour including the homestead at Plot 417 that was his home and which featured in the census that we already have consulted.

Turning to the images of the pages of the actual Apportionment Book from the time we see that William rents just over 89 acres from The Queen, valued at £15.9s.10d. for the tithe payment, while Lord George Seymour leases a little over 113 acres to him at a tithable rent-charge of £24.18s.7d payable to the Rector. 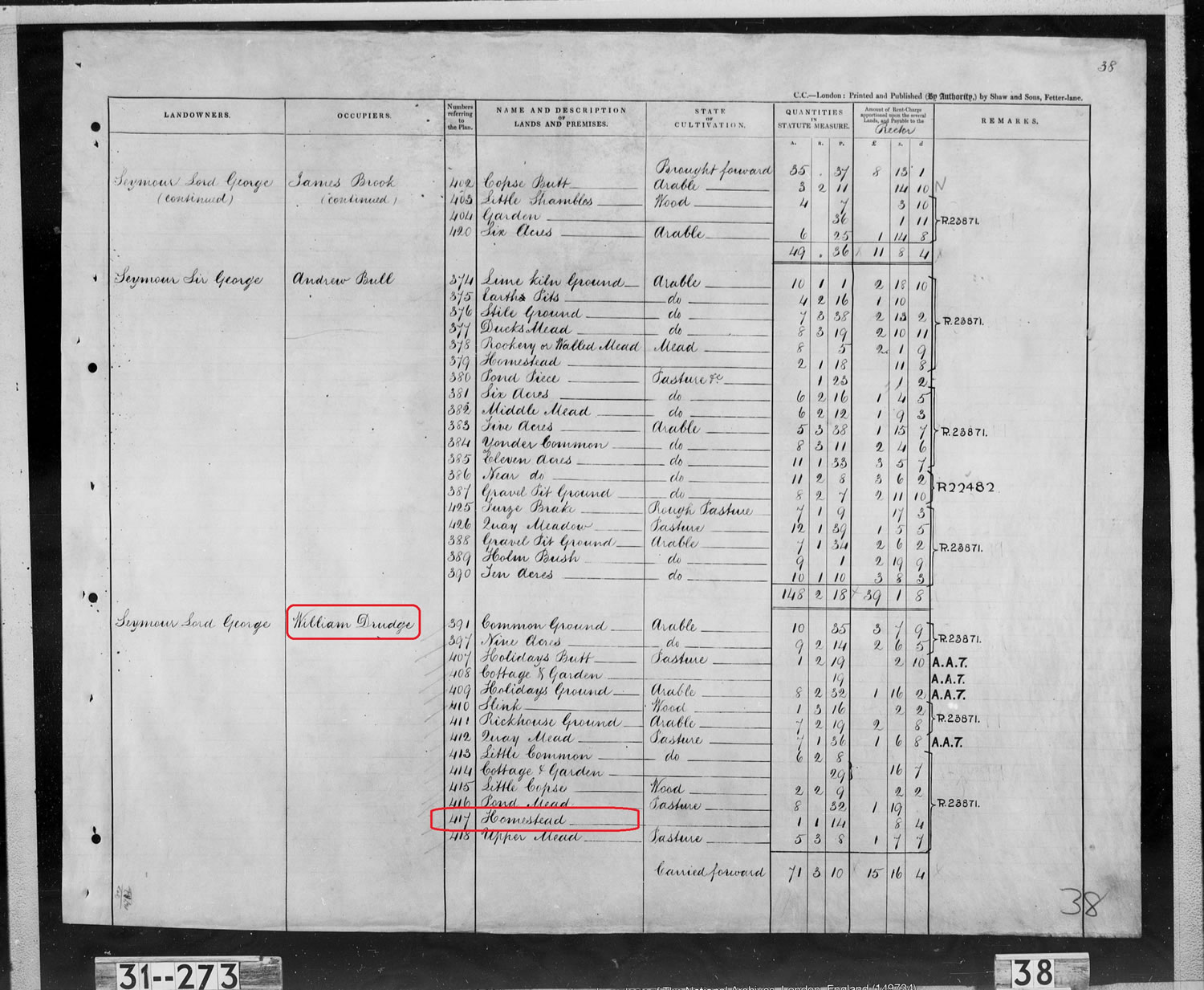 The tithe records are linked to tithe maps that identify each plot by number. With the latest release completing the addition of the Tithe Map collection onto TheGenealogist's Map Explorer™ we are able to use its georeferenced maps to switch from the Victorian tithe map to view the exact coordinates on a variety of historical and modern maps.

From the Master Search results there are two map options provided by TheGenealogist. Firstly we can view the result as a green pin on the individual tithe map. Plot 417 is clearly identified on this as Kingston Farm is shown as a feature on the map with its name annotated clearly on the tithe map. The green pin shows us a box with the name of the landowner and that of the occupier and a link to the transcript. 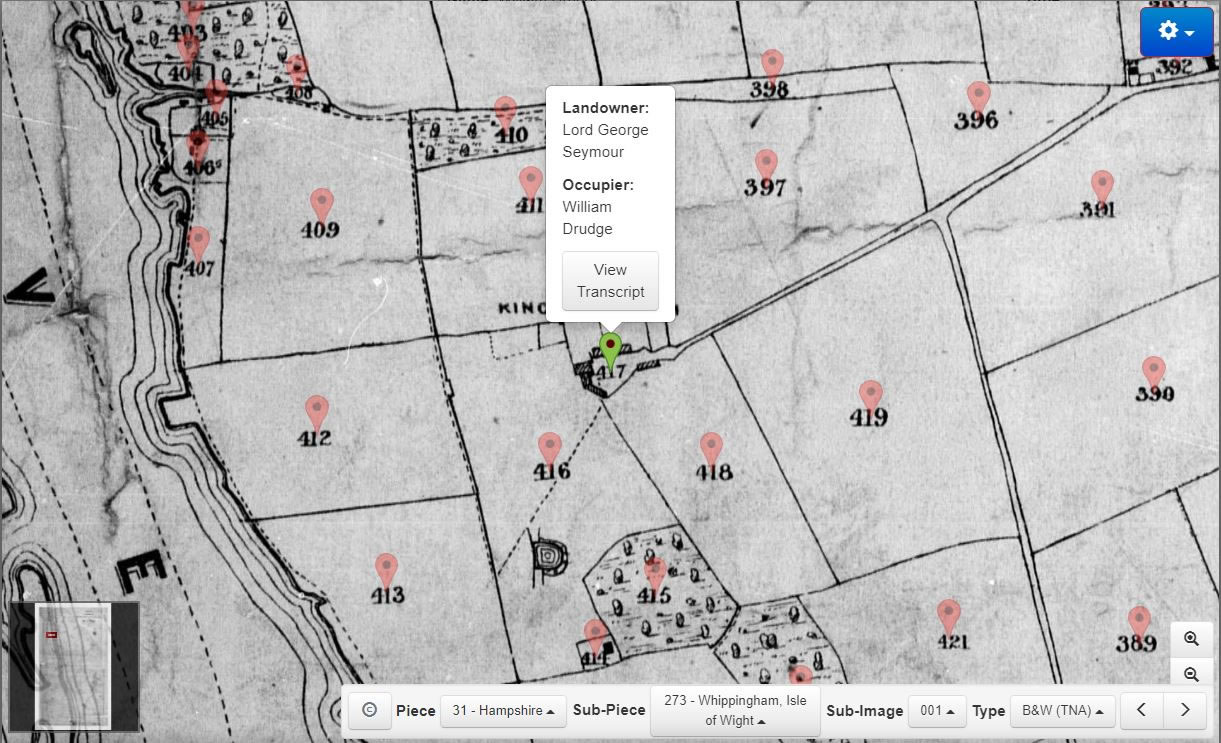 The Power of Map Explorer™

The second and most powerful option is to open the tithe map within Map Explorer™ that then gives us the opportunity to use the interface's overlaid mapping to explore the area more thoroughly. We will be able to see the plot coordinates in the changing environment over time by selecting the historical or modern maps from the dashboard. 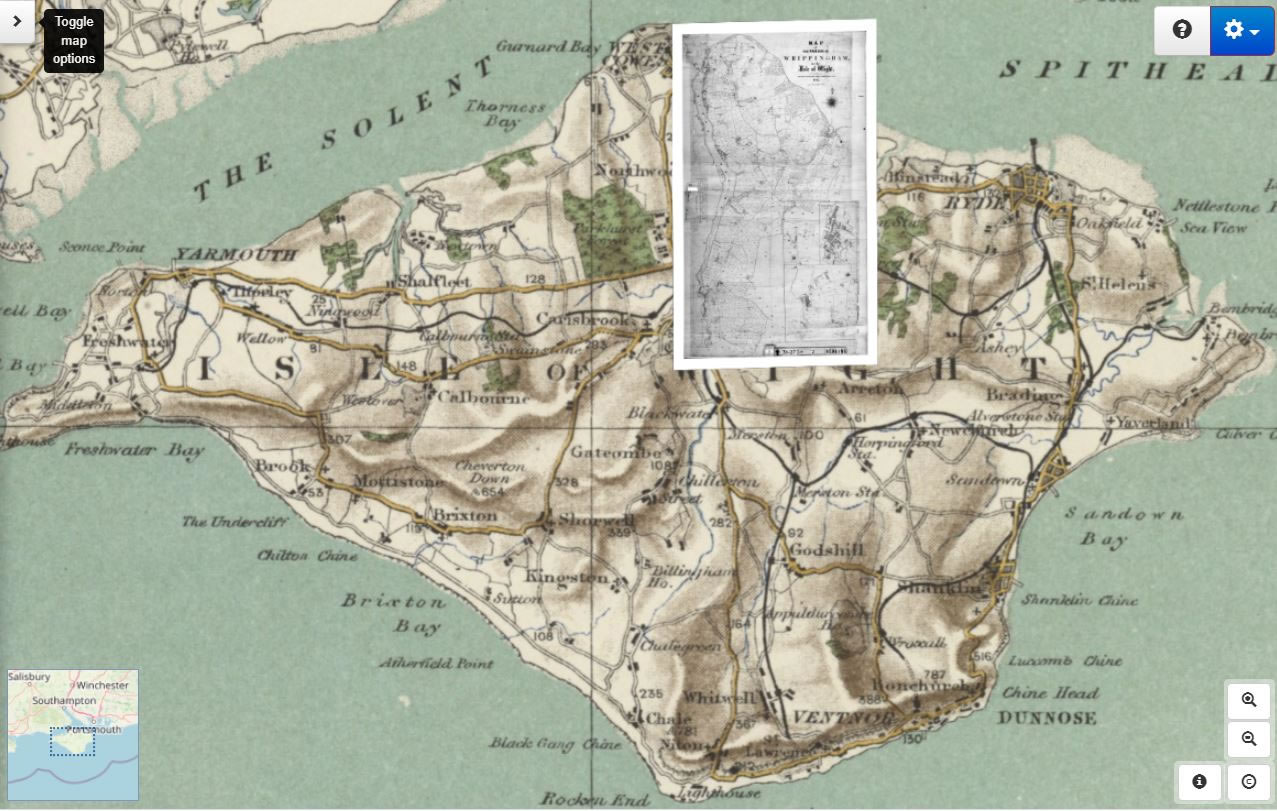 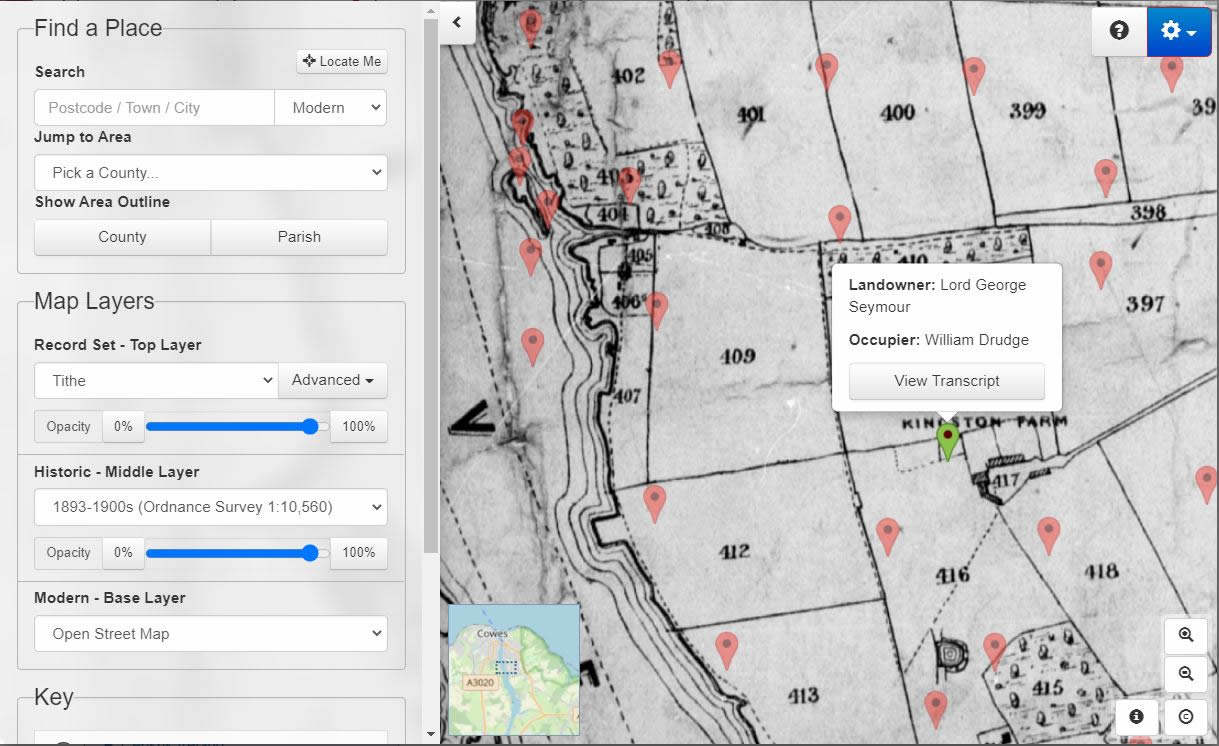 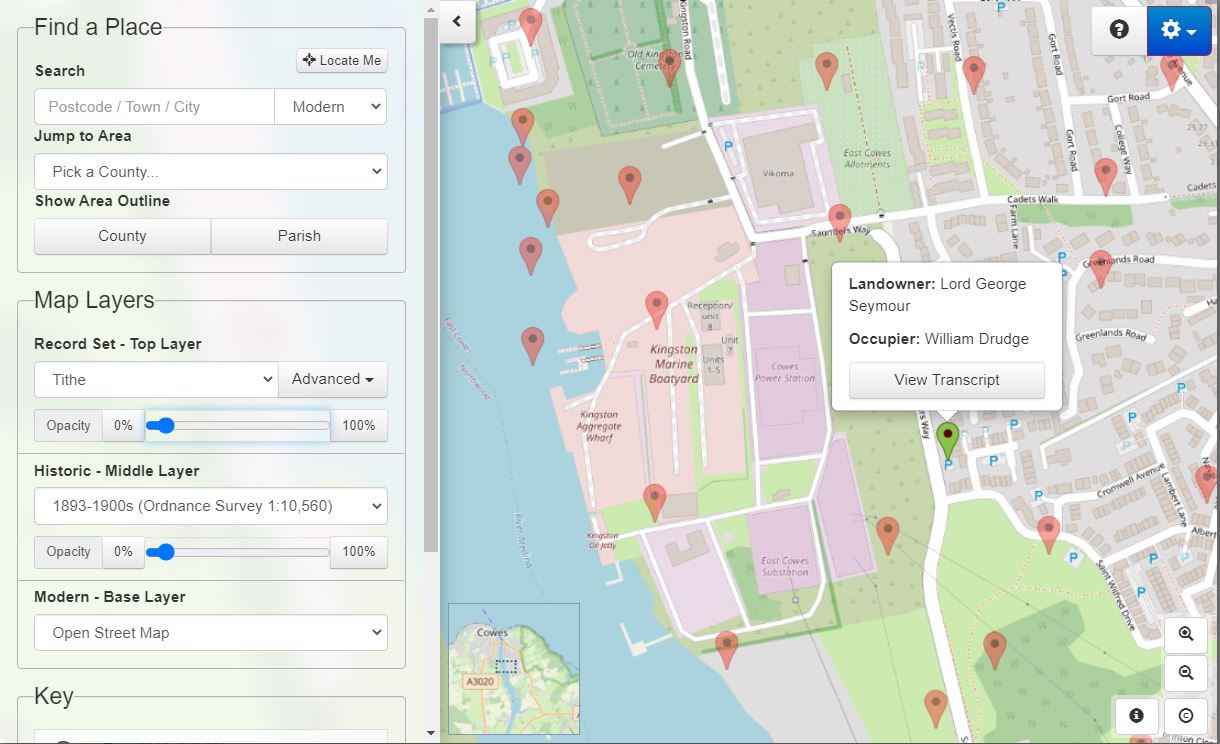 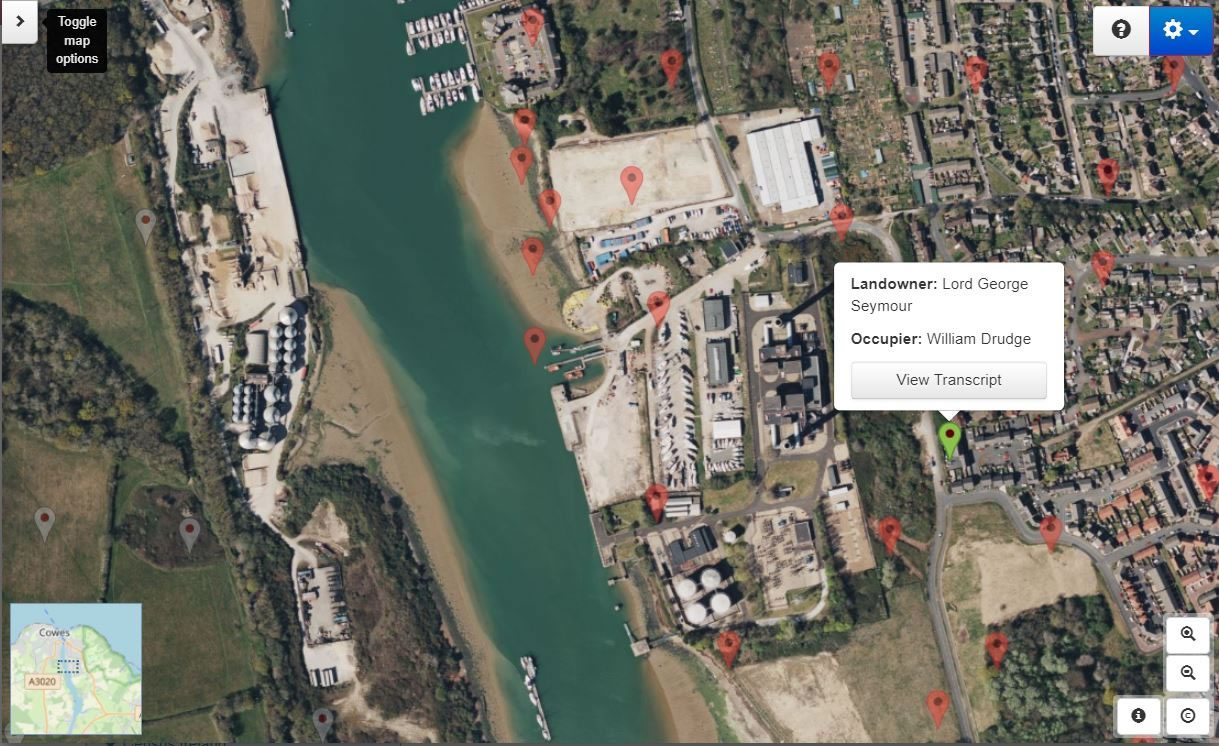 What we are able to see, by working with the different maps, is that William Drudge's onetime family home has now disappeared under housing and other urban developments, with some of the fields that he once farmed on the shore of the River Medina now given up to a boatyard and a powerstation.

Who are the neighbours?

Zooming into the tithe map on the Map Explorer™ and scrolling around the map will allow us to explore the neighbourhood and discover who Farmer Drudge's neighbours were. In the case of Kingstone Farm, less than half a mile away we are able to see what was at the time the newly acquired Isle of Wight residence of Queen Victoria. The lane from the Drudge's homestead runs east and meets the main road to Whippingham that is now known as Beatrice Avenue. Continuing east, however, along Crossways Road for a short distance would have brought our farmer up to the gate of Osborne House that is identified on the tithe map and apportionment book as being both owned and occupied by The Queen. It is intriguing to note that Osbourne House and estate had been surveyed in the same way as the land of her subjects would have been. The difference here, however, was that instead of the monarch paying her tithes to the rector, the apportionment book is clearly annotated to show that the tithes on the estate were payable to The Queen herself! 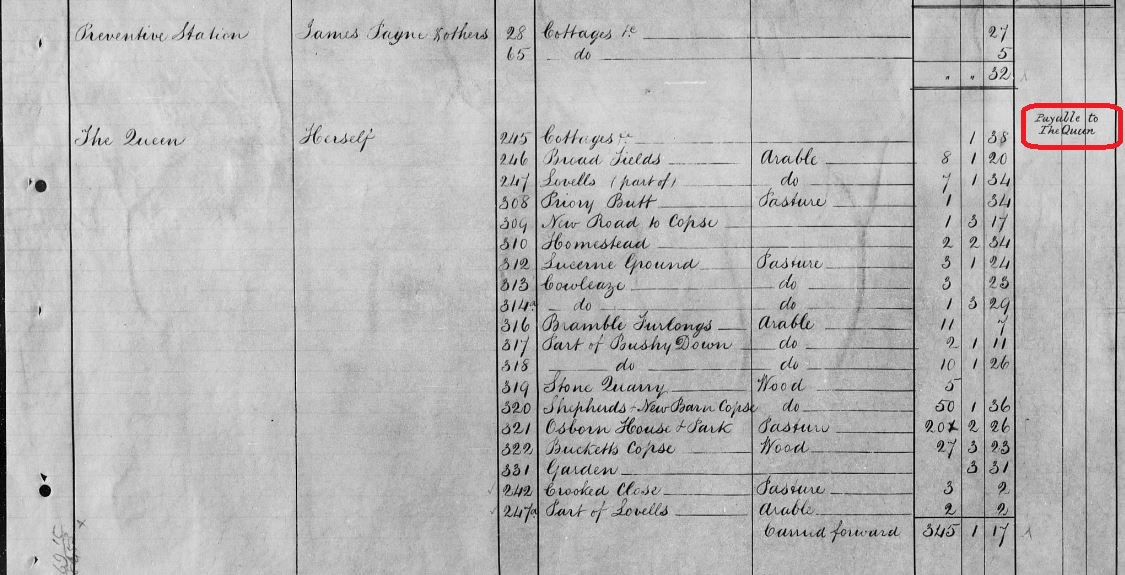 Osborne House in East Cowes, Isle of Wight was built between 1845 and 1851 for Queen Victoria and Prince Albert as a summer home and rural retreat; it was designed by the prince himself taking its styling to resemble an Italian Renaissance palazzo. The builder employed for the job was Thomas Cubitt, the London architect and builder whose company was responsible for building the main facade of Buckingham Palace in 1847 and which we are all familiar with today. 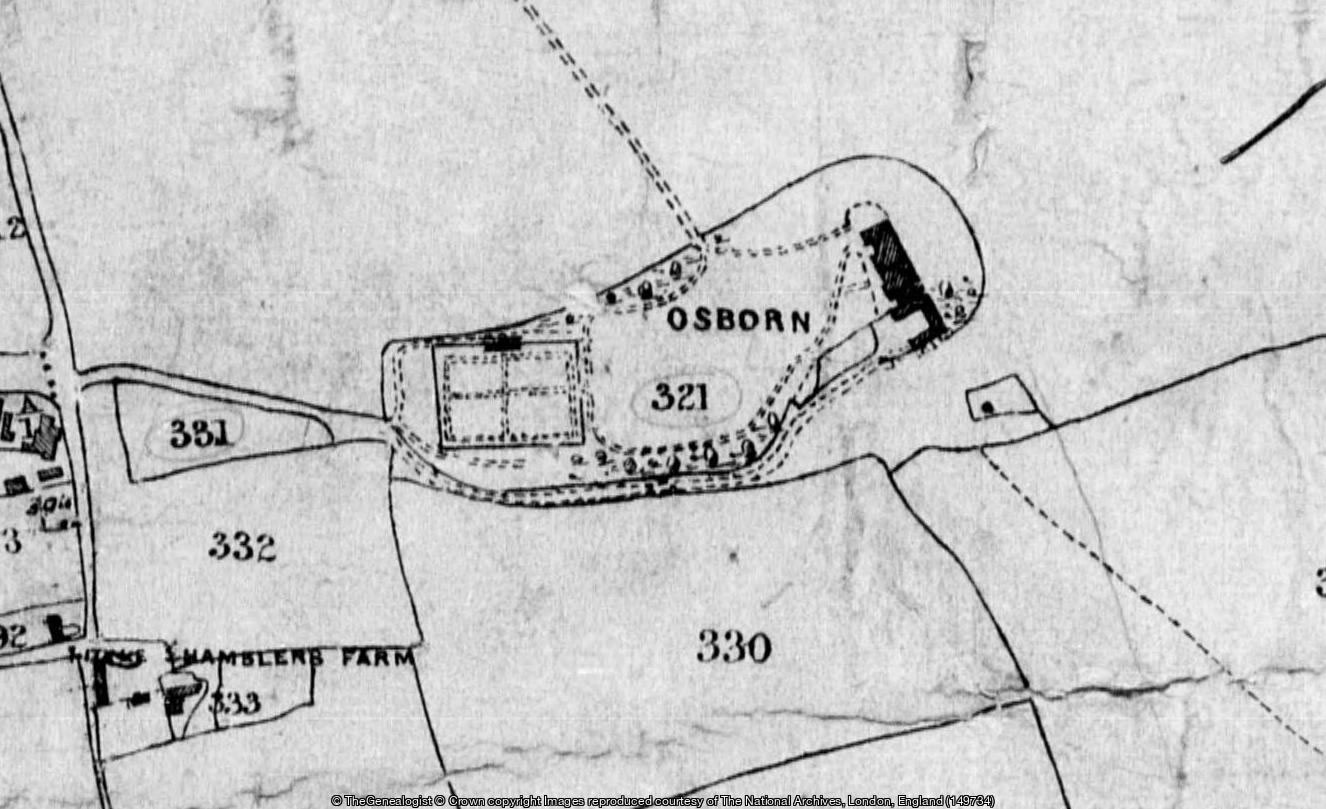 To make way for the Royal residence at Osborne an earlier smaller house on the site had to be demolished, though the original entrance portico survives as the main gateway to the walled garden. As the tithe survey was dated 13 February 1844 we can tell that Osbourne House was in the early stage of its construction and indeed a glance at the tithe map shows a smaller footprint of the new house than in later maps. 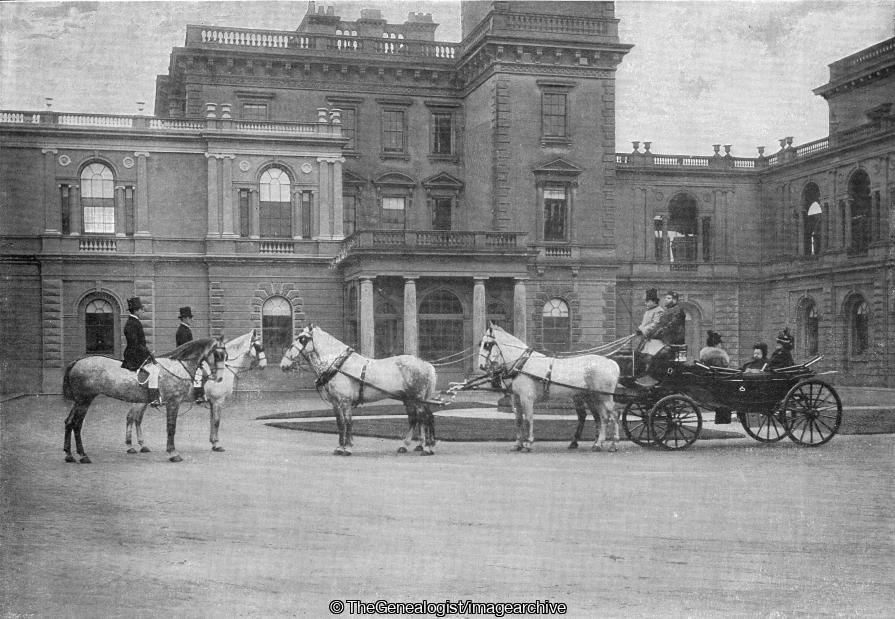 Osborne House was where Queen Victoria died on 22 January 1901. Following her death her son, King Edward VII, who had never held the same affection towards Osborne, presented the house to the state on the day of his coronation, with the royal pavilion being retained as a private museum to Victoria. Part of the estate around the stables was then used as a junior officer training college for the Royal Navy from 1903 to 1921 with cadets beginning their initial training here at age 13 before transferring to the Royal Naval College, Dartmouth to complete their instruction. At this time it became known as the Royal Naval College, Osborne while another part of the house was turned into a convalescent home for officers in World War I. In 1954, Queen Elizabeth II gave permission for the first floor rooms (the private apartments) in the royal pavilion to be opened to the public and in 1986, English Heritage assumed the management of Osborne House also opening the second floor of the house to the public in 1989.

With the complete tithe collection now being linked to TheGenealogist's Map Explorer™ it is possible to investigate your own ancestors' neighbourhood by making use of the various georeferenced maps from Victorian times up to the present day.

With Map Explorer™ you are taken back in time and can explore the area using contemporary maps, all from a simple click within the record itself. This is now possible whether it is the Victorian Tithe records or the 1891, 1901 or 1911 census as well as the 1939 Register. All these records are now linked to this map interface making researching the neighbourhoods of our ancestors both easy and a fascinating experience. As a researcher you will be able to see a person's home in relation to its neighbourhood. You are able to explore the surrounding streets in a town or city, or the lanes and roads in the countryside, and so get a better feel for where your forebears had once lived.