The Clog Dancers house and the paths they would have trodden...

A census allows us as family history researchers a snapshot of the country at a particular time. It gives us the chance to find out where our ancestors were on census night. This is very important for us to discover details of family members, dates and places of birth and so on. But a census also allows us to look at where our ancestors' home was in relation to its neighbouring properties. With the address we can explore the surrounding streets in a town or city or the lanes and roads in the countryside. A good way to do this is to take the address and then find where it had been by consulting a map from the period. An even better way is if we are able to switch between contemporary historical maps and modern maps to see where the property may have been as with the passing of time roads can change names, be extinguished or redevelopment and wartime bombing may have changed the landscape out of all recoginition.

The addition of the 1901 census records to TheGenealogist's Map Explorer™ for the first time allows researchers to jump straight from finding a person in the records to a map that shows where the property had been located. In many cases you will be able to see the house plotted in the street, especially in London. Around the country the links from the maps will identify down to the parish, road or street so that you will be able to investigate the neighbourhood where your forebears lived as the 20th century was still new.

Charlie Chaplin (16 April 1889 – 25 December 1977) was an English comic actor, filmmaker, and composer who is well known for his performances on the silver screen in the era of silent film. He became a worldwide film star especially known for his screen persona, the Tramp. This most important figure from the film industry had a career that spanned more than 75 years, from childhood in the Victorian era until a year before his death in 1977.

His childhood in London was one of poverty and hardship. Chaplin's father was absent and his mother struggled financially so the young boy was sent to a workhouse twice before age nine.

Attending poor schools, Chaplin began to perform on stage. He later recalled making his first amateur appearance at the age of five years, when he took over from his mother Hannah for one night in Aldershot. By the time he was nine Chaplin had, with his mother's encouragement, grown interested in performing. He later wrote in the 1964 book:. My Autobiography. Published in London by Simon & Schuster. "[she] imbued me with the feeling that I had some sort of talent". 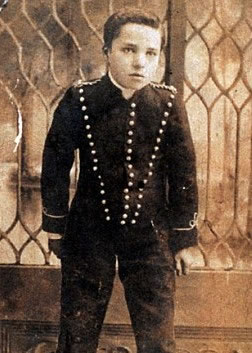 Chaplin became a member of the Eight Lancashire Lads clog-dancing troupe, with whom he toured English music halls throughout 1899 and 1900. If we search for him in the 1901 census on TheGenealogist then we find him aged 8 in Lambert where he is in a household filled with fellow Music Hall Artistes. 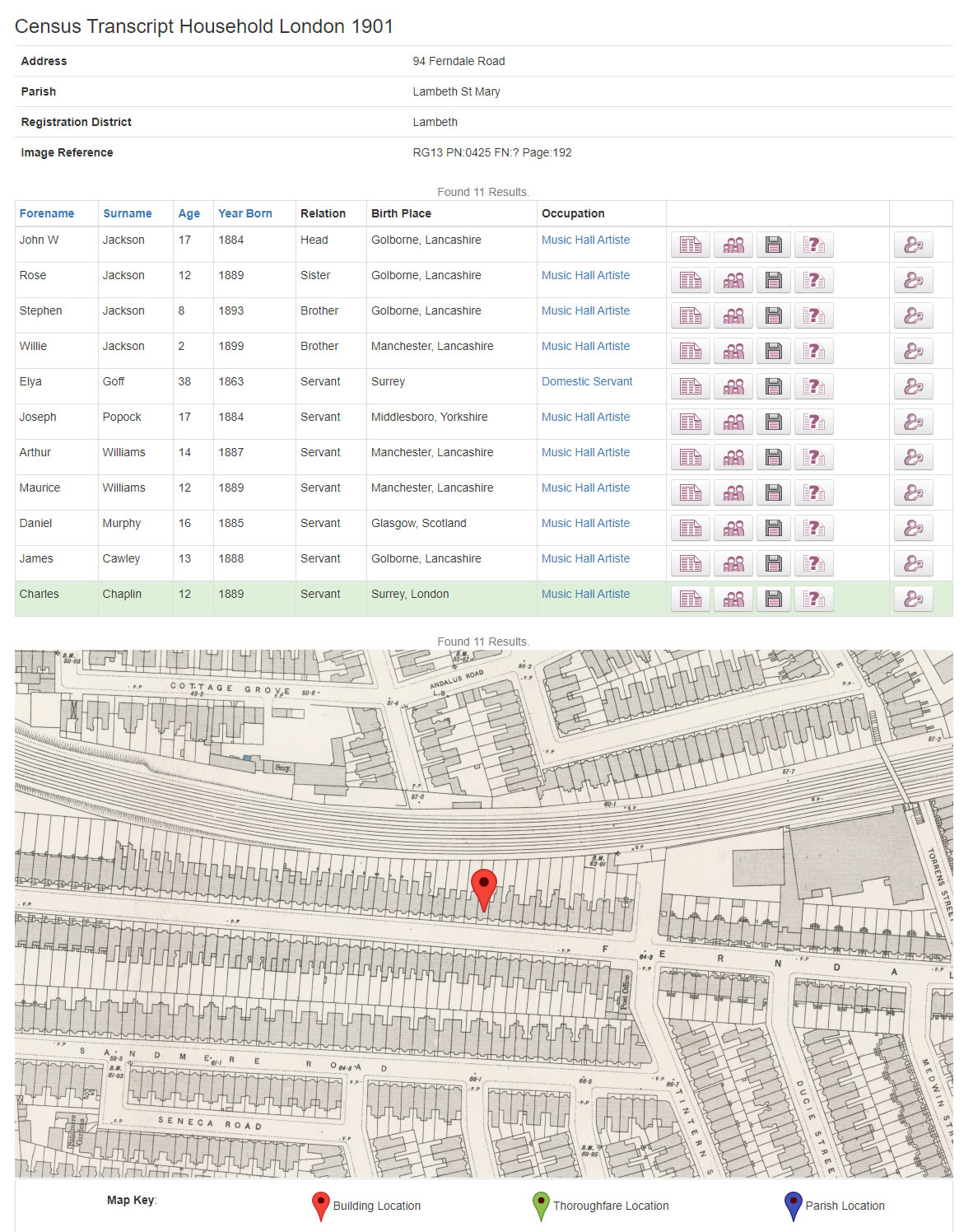 No 94 Ferndale Road in Lambeth, Surrey is the property in question. The head of the household is recorded as John W. Jackson (17 years old) and a bit of research into The Eight Lancashire Lads reveals that the Jackon family founded this group of clog dancers. Charlie Chaplin, received his first professional break performing as one of them at the age of eleven. This then is a record of the troupe from 1901 when he is recorded as just 12. We are able to note that Rose, John Jackson's sister who was of the same age as Charlie, is also in the house. Information from another book entitled Chaplin's Music Hall: The Chaplins and their Circle in the Limelight, published by I.B.Tauris and written by Barry Anthony, reveals that Rose Jackson was one of The Eight Lancashire Lads when performing on stage, notwithstanding that she was a girl. 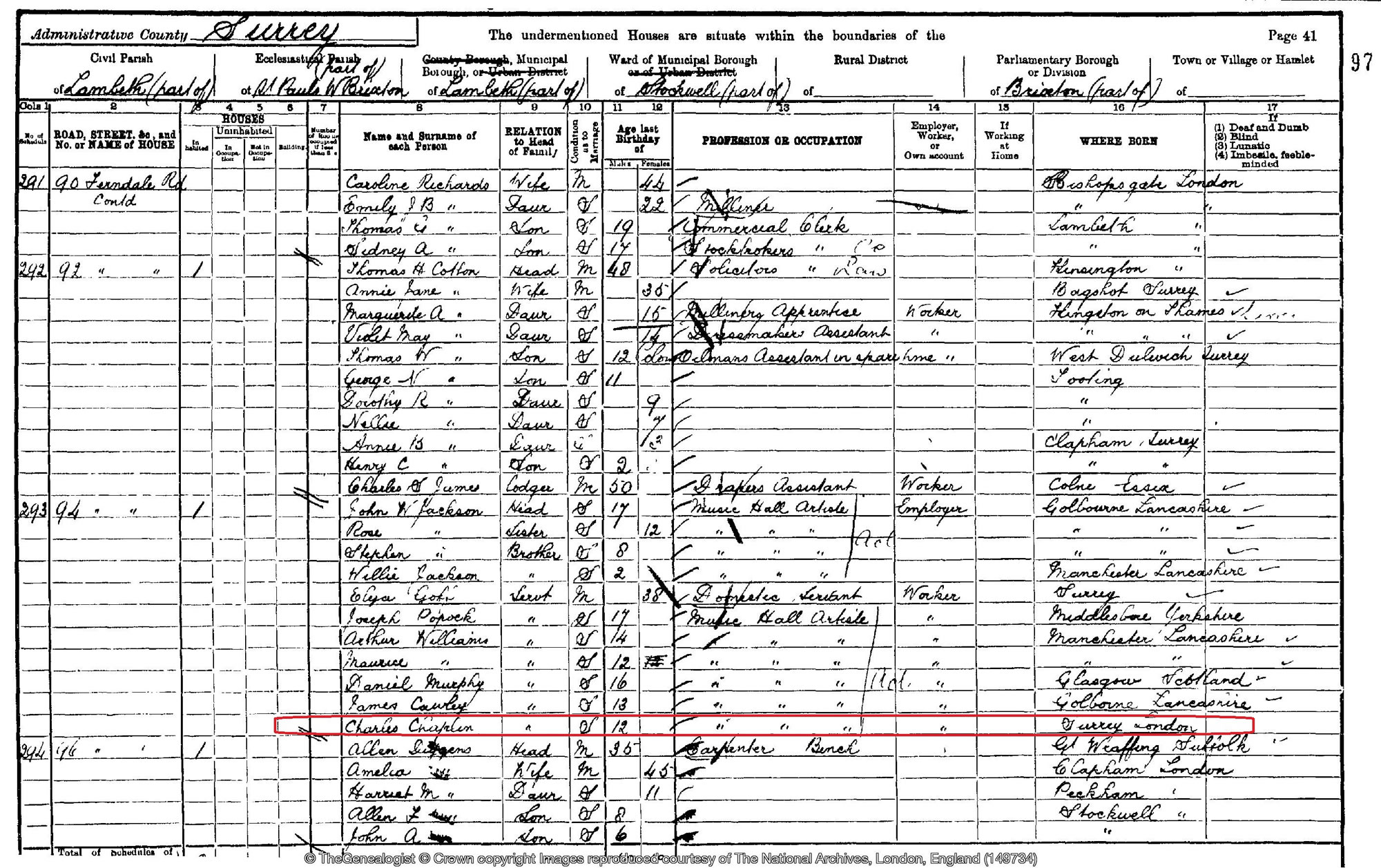 Locating the house on the map by simply clicking through from the census transcript takes us to a part of Lambeth that was close to the railway track. Number 94's backyard would appear to look out at the line that ran out of Clapham Junction and so we can wonder at how noisy it would have been. Perhaps the clackety clack of the trains passing by drowned out the sound of any clog dancing that the troupe performed as they rehearsed their routine? At the end of their road was the City of London Almshouses as well as where today stands the Ferndale Community Sports Centre at one time the City of London Freemen's Orphan School. A few steps away, where Ferndale Road was intercepted by Tintern Street there was a corner Post Office which the occupiers of the house may have frequented. About a mile to the west and perhaps a 20 minute walk away was Clapham Common where perhaps they may have gone for a breath of fresh air?

Diamond subscribers of TheGenealogist are able to search for their own ancestors in the 1901 census and then click through to the georeferenced maps with which they will be able to see their own forebears' neighbourhood in detail. Using the historical maps the researcher will be able to do a similar investigation of the area as we have done in the case study of Charlie Chaplin and the Eight Lancashire Lads and find shops, public houses, railway stations and other places that their own ancestors would have known well in their everyday life.