On the evening of the 3rd April 1881 Charles Darwin and his wife Emma were at home in Kent. It was the night of the census and from a look at the record we can see that they had a fairly full house at that time. Those staying under the roof that night at Downe House consisted of grown up members of the family, visitors and eight servants. The adult children included their eldest son, William (41) and his American wife, while also present were three of Darwin's other sons; the unmarried George (35) and the widower Francis (32) plus Leonard (31). We can also see staying at the house was one of Charles and Emma's nieces, Rose, along with her German Violinist and Music Director husband called Herman Frank. 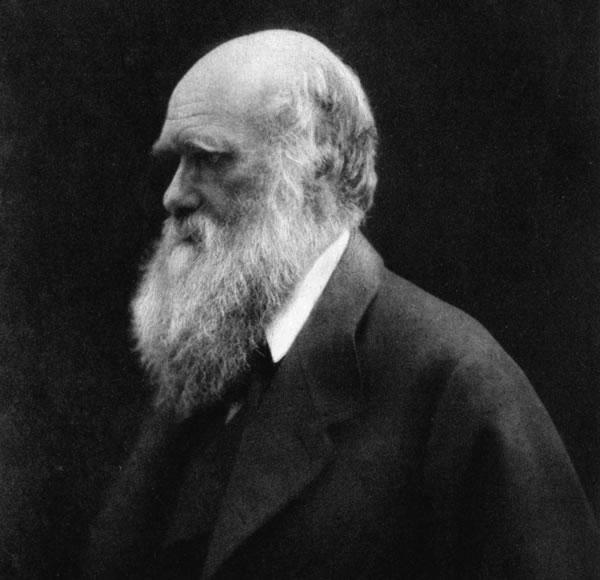 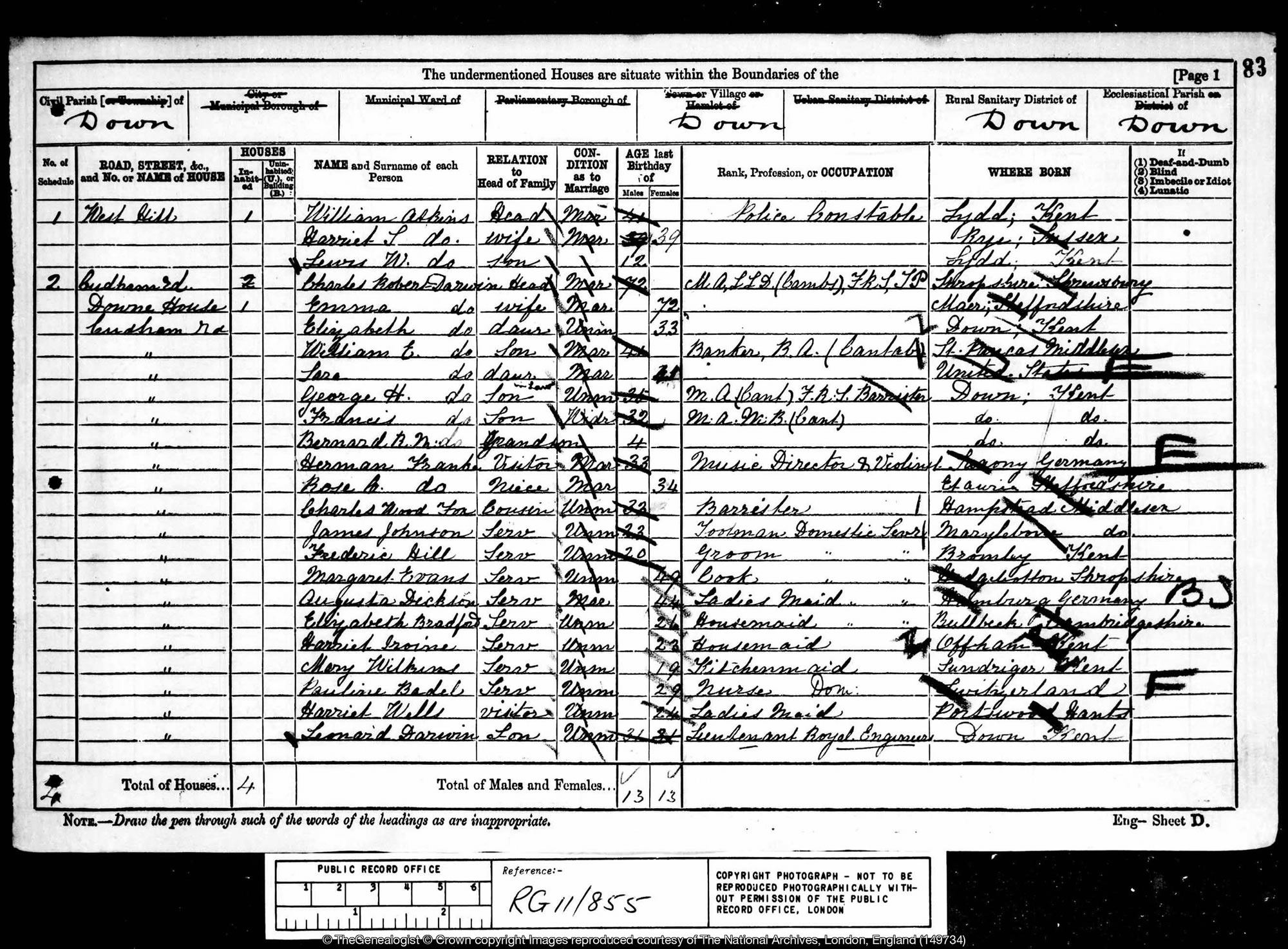 William Erasmus Darwin was the son for whom, immediately after he had been born in 1839, Charles Darwin had begun studying to gather data on the natural history of babies. Using William in the first seven days after birth, Darwin recorded William's sneezing, hiccupping, yawning, stretching, suckling, screaming, and reaction to tickling. These observations continued into 1841 and were eventually published in the journal Mind in 1877.

Viewing the image of the census page we see that the eldest, William Darwin is by this time a Banker. He holds a Bachelor of Arts from Cambridge University while William's brother, George, is a Barrister at this time with a Master of Arts from Cambridge; he would change career later to go back to Cambridge as an academic focusing on mathematical science. Another of the brothers, Francis, has a MA as well as a MB (a medical degree) though further research says that he didn't go on to practise medicine, instead he became a botanist. The third son, who for some reason is included after all the servants in the 1881 census had been listed, was named Leonard. In this record he is enumerated as a 31 year old Lieutenant in the Royal Engineers. 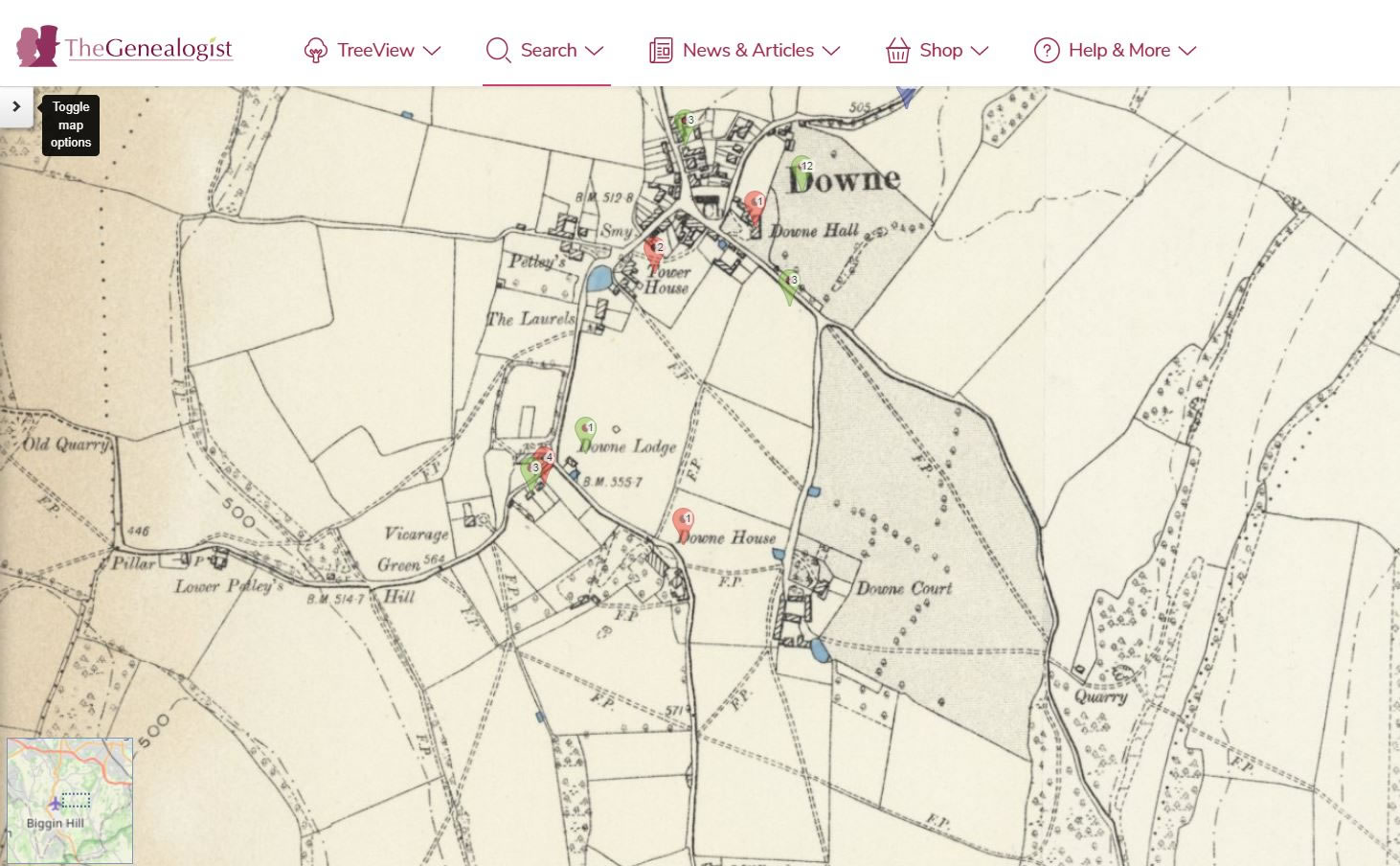 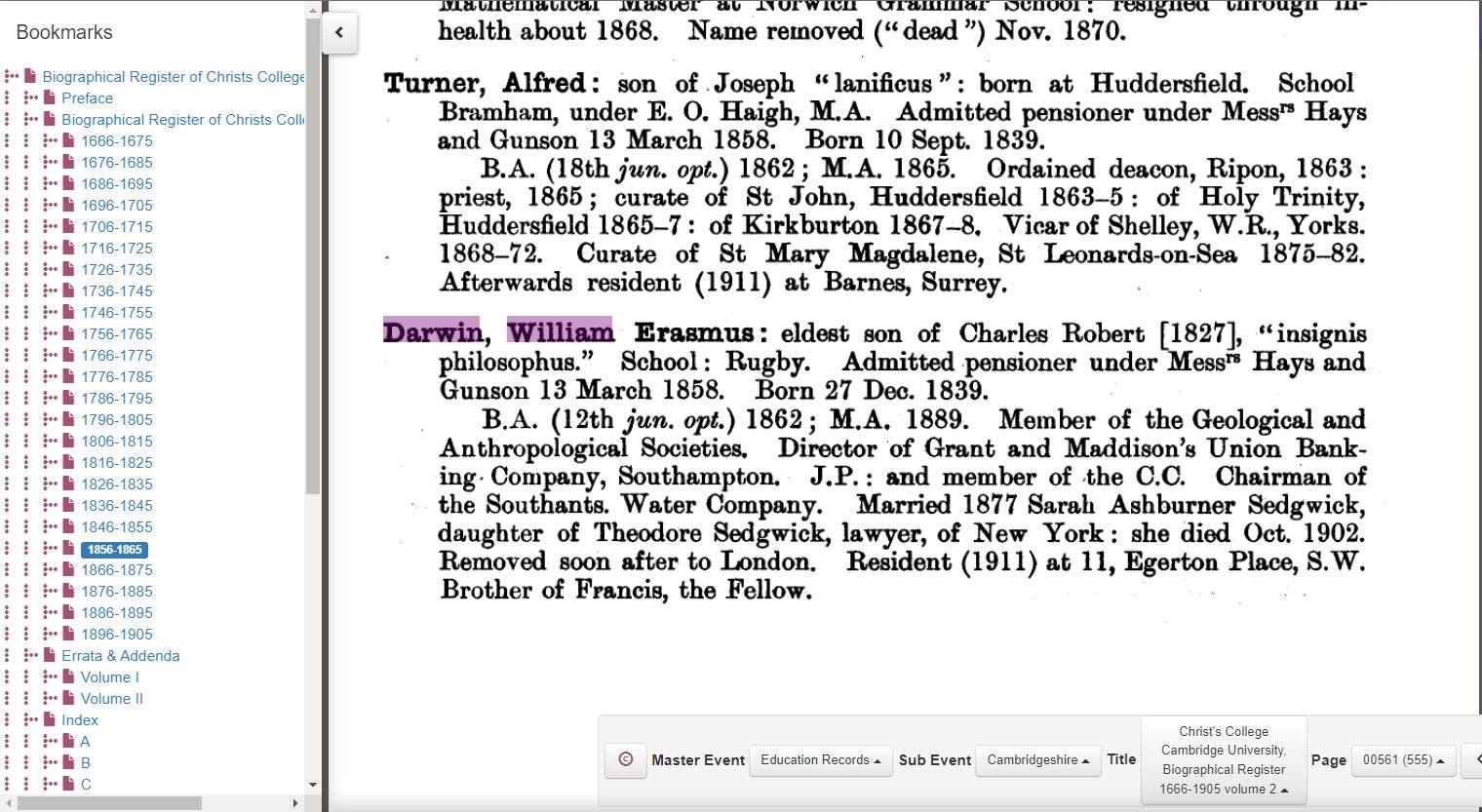 In order to discover more about the three sons all we need to do is to turn to the Who's Who 1899 in Occupational Records on TheGenealogist to find their achievements recorded. Also revealed in the sons' biographies is that their mother was the granddaughter of Josiah Wedgwood of the famous pottery company. 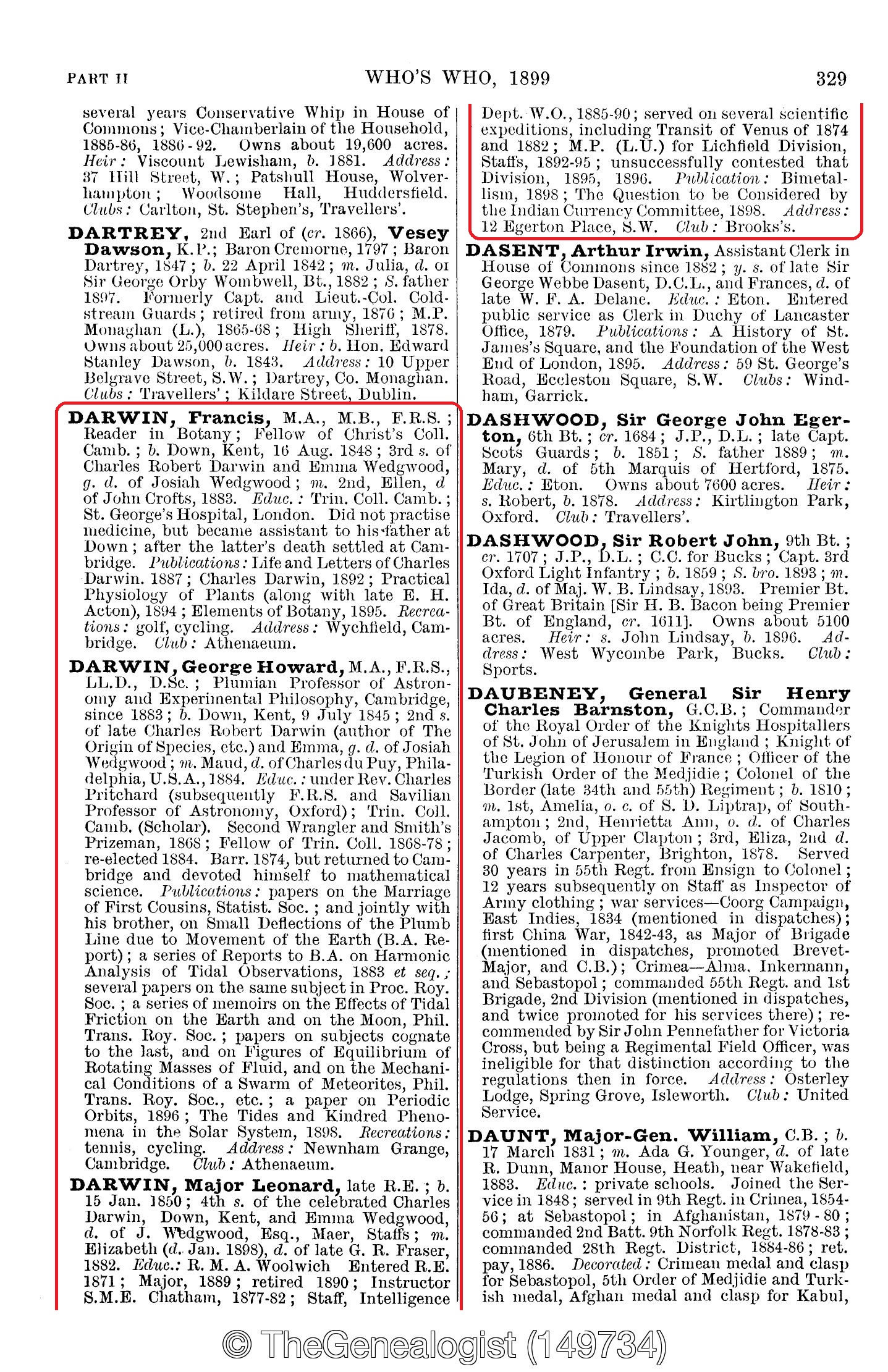 TheGenealogist's Occupational Biography Records: Who's Who 1899

The Darwins had a total of ten offspring, four of which were daughters – Anne Elizabeth, Mary Elenor, Henrietta Emma and Elizabeth Darwin. As to be expected, with an era before female equality, the records concentrate entirely on the male siblings. Searching for some of the sons on TheGenealogist finds three of them in the Who's Who for 1899 that is part of the Occupational records on TheGenealogist. Using this and Ten facts about Charles Darwin's ten children in a post from 2013 the OUP Blog by Tim M. Berra, we can tell more about the Darwin family.

Possibly the most distinguished of the Darwin children would seem to be George Howard Darwin. We have seen him giving his occupation as a Barrister in the 1881 census. Having been trained in mathematics and astronomy, he became a protégé of Lord Kelvin. George Darwin would become a professor at Cambridge and was recognized as Britain's leading geophysicist. George became the world's authority on tides, was elected Fellow of the Royal Society and knighted. Sir George died on 7 December 1912.

Not given a mention in the Who's Who publication is Leonard Darwin. In the 1881 census he was a Lieutenant in the army. In fact he had multiple careers and after twenty years as an army officer he retired and became a Member of Parliament, and an economic expert on monetary policy and the relationship between gold and silver prices. Later in his life he was an eugenics advocate, and, most importantly, mentor to Sir Ronald Fisher, the population geneticist and one of the founders of the new evolutionary synthesis. Leonard lived the longest of all the Darwin children dying on 27 March 1943, at the age of 93. 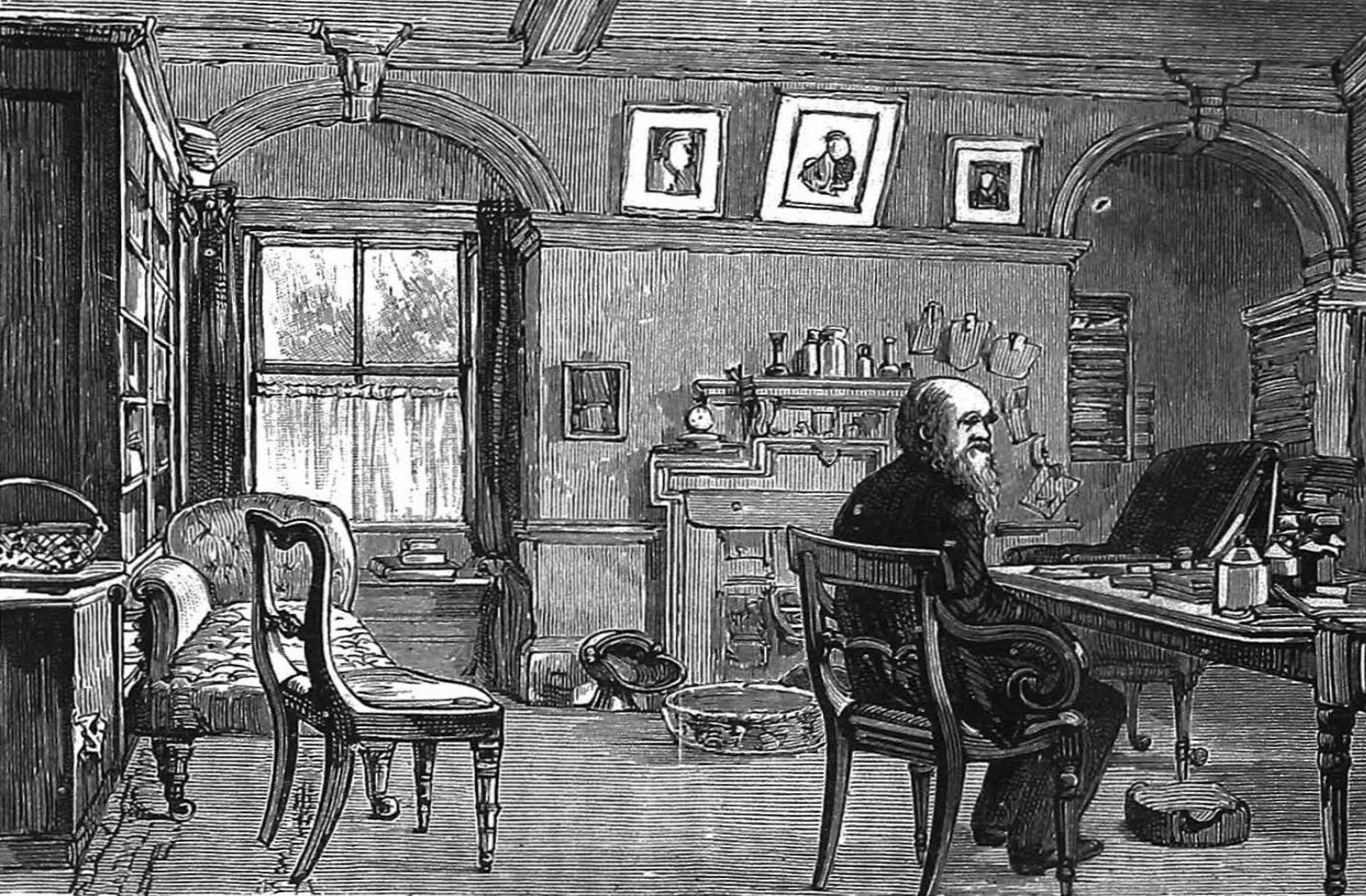 Not only has the 1881 census given us the starting point to research members of the Darwin family, but it has also pinpointed on Map Explorer™ Charles Darwin's home at Downe and so allows us to find the area of Kent in which he had lived.