Where did they live? – Mapping your ancestors' home in 1911

Where did your ancestors live in England or Wales at the time of the 1911 census? As family history researchers we are able to read the address that our ancestor wrote on the form, but then our next question may be how to find out where that address had actually been by turning to look at a map. With the exciting new release by TheGenealogist which connects the results from the 1911 census with an extra record layer on the Map Explorer™, family historians are now able to click through from a 1911 census transcript to locate where their ancestors' had once lived and to see where this is in a number of linked georeferenced maps.

The boyhood home of the "Master of Suspense"

At the time of the enumeration of the 1911 census an eleven year old East End of London boy was growing up in the densely packed roads of Limehouse in Tower Hamlets. The street in question was called Salmon Lane and his family sold fish for a living from two premises in the same road. The boy we are looking at here was Alfred Hitchcock and he would leave his fishy surroundings to go on to become one of the most influential and widely studied filmmakers in the history of cinema. Known as the "Master of Suspense", he directed over 50 feature films in a career spanning six decades.

Born in Leytonstone in August 1899, when he was six his family moved to live in Limehouse and it is here that his father, William Hitchcock and mother Emma, leased two stores at 130 and 175 Salmon Lane. The first they ran as a fish-and-chips shop and the second as a fishmongers. By carrying out a search for Alfred in the census records on TheGenealogist we can see, from the return, that they were living above number 175 Salmon Lane.

With the newly added feature only on TheGenealogist it is now possible to see directly underneath the transcript details a map of where the property was located. Then by clicking on this map we are taken through to the Map Explorer™ and so we are able to view the pins for the results of the 1911 census on a contemporary map from the period or even a modern map or satellite view to see what the surrounding neighbourhood looks like today. 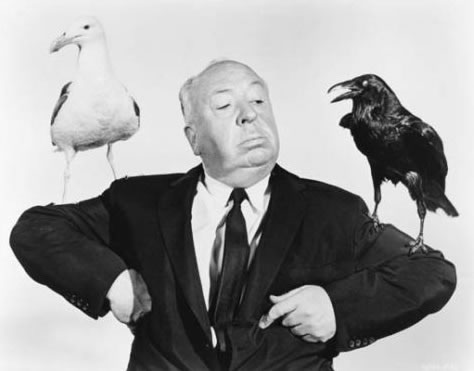 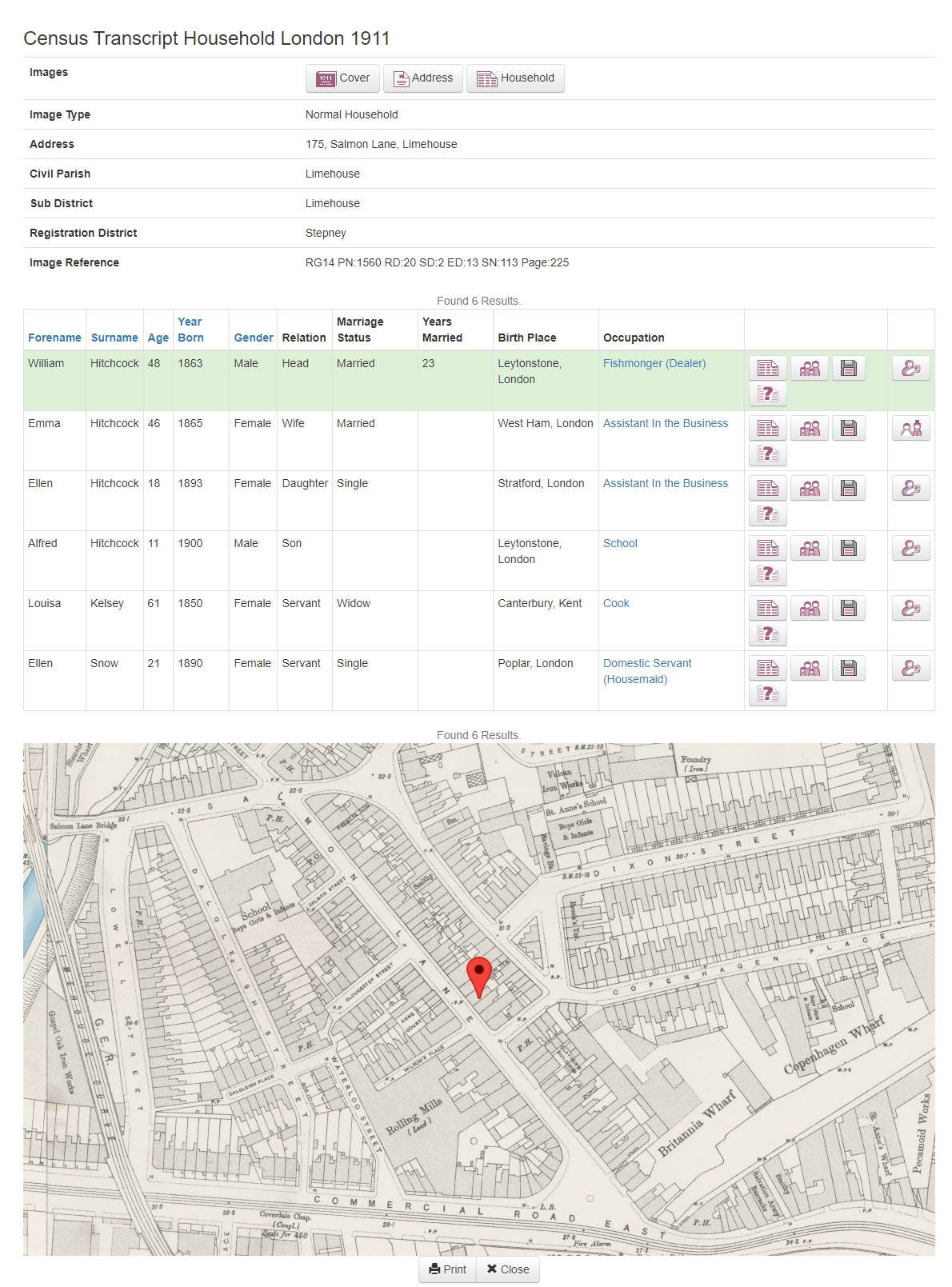 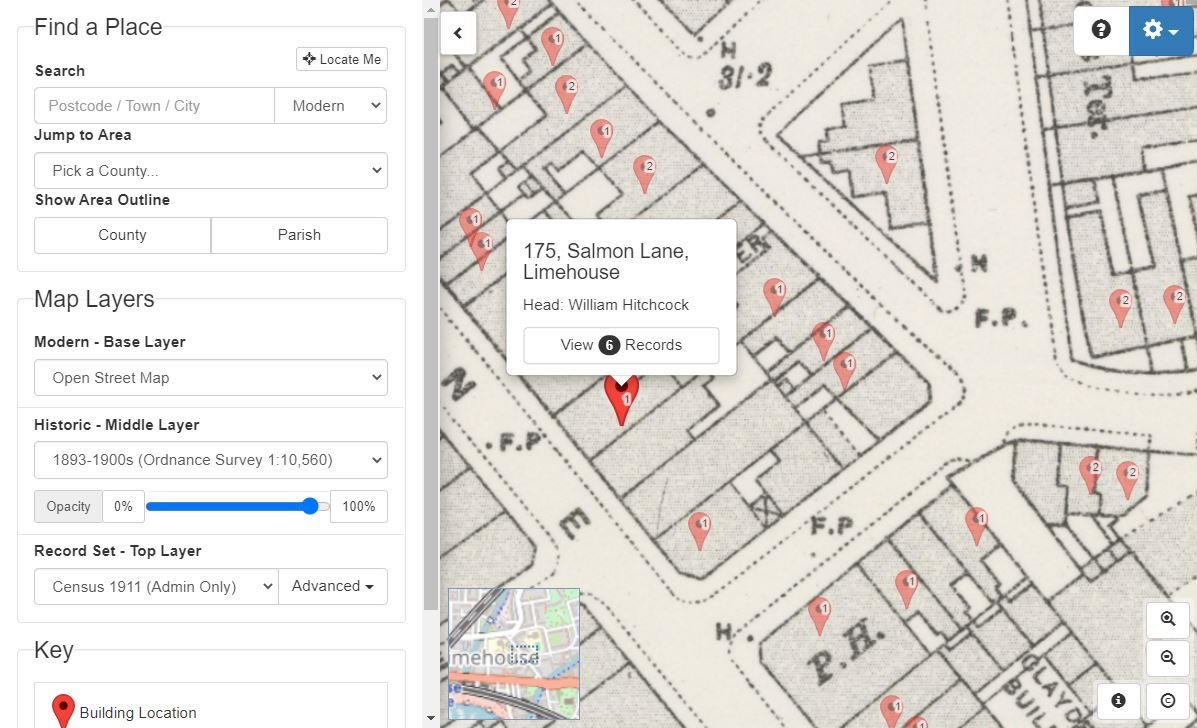 From Golden Farm to Silver Screen

At the same time as the 11 year old future movie director Alfred was going to school in the Limehouse area of London, a 1 year old boy, destined to become a very fine British actor and Hollywood star one day, was growing up in the Gloucestershire countryside on Golden Farm.

David Niven, or more correctly James David Niven, can be found enumerated in Cirencester on a farm just outside of the remains of the city walls. The head of the household is identified in the census as William Edward Graham Niven, David's father. The Niven's home was the larger of the two households documented at the farm and had 13 people recorded including family and staff. We are able to see this noted on the result when we click on the pin for Golden Farm on the map. From the transcript we can then open the image of the census page which shows us that it was a 19 room property. By viewing the property on the Map Explorer™ opens up the possibility to see how the farm has now been surrounded by suburban roads by switching between the contemporary historical map and a georeferenced modern map, or even a satellite view. 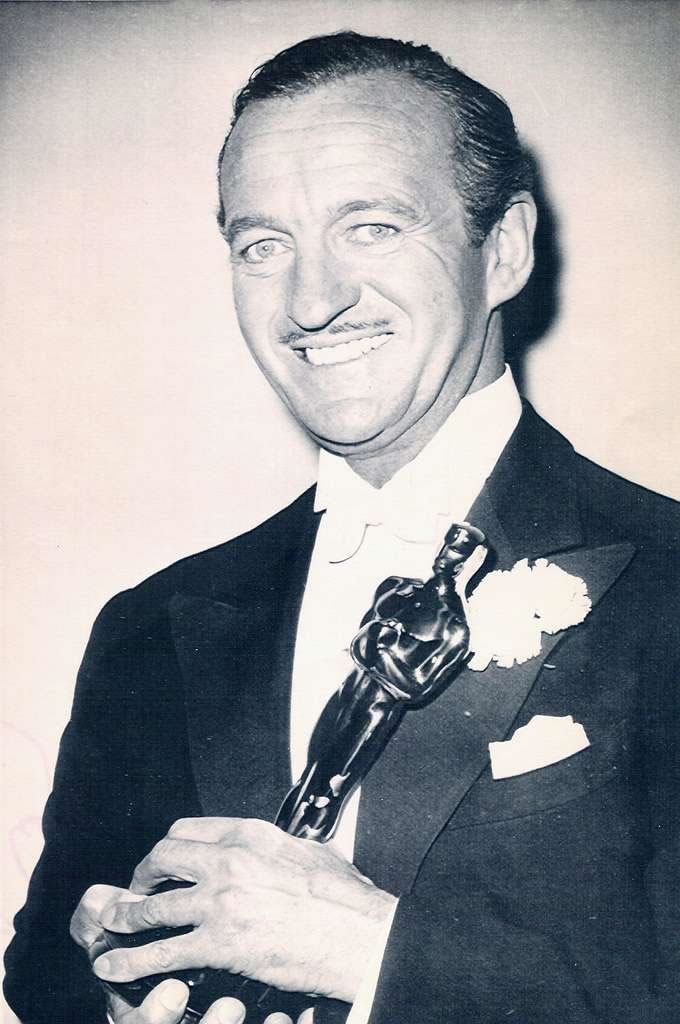 Census transcript for the Niven family at Golden Farm, Cirencester 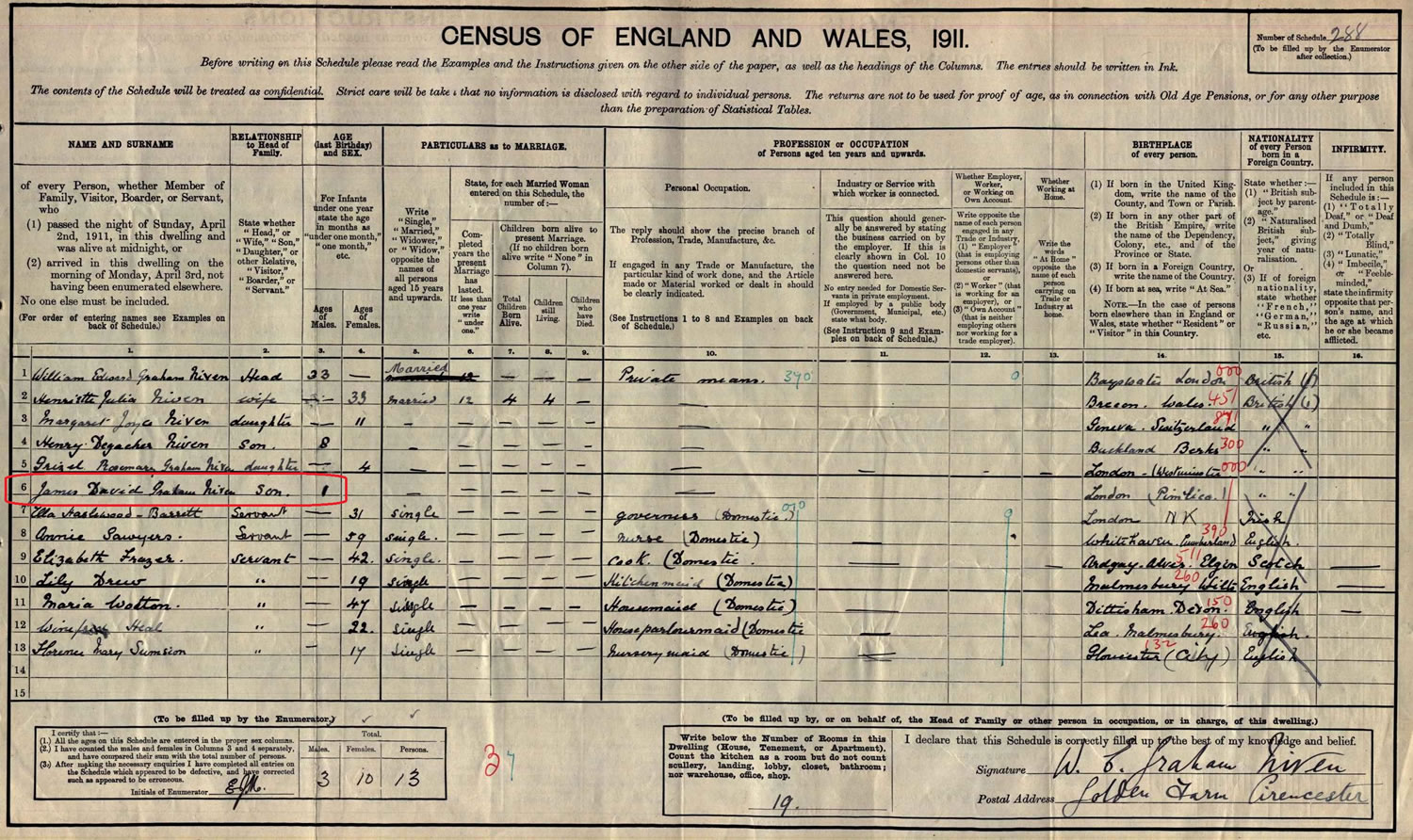 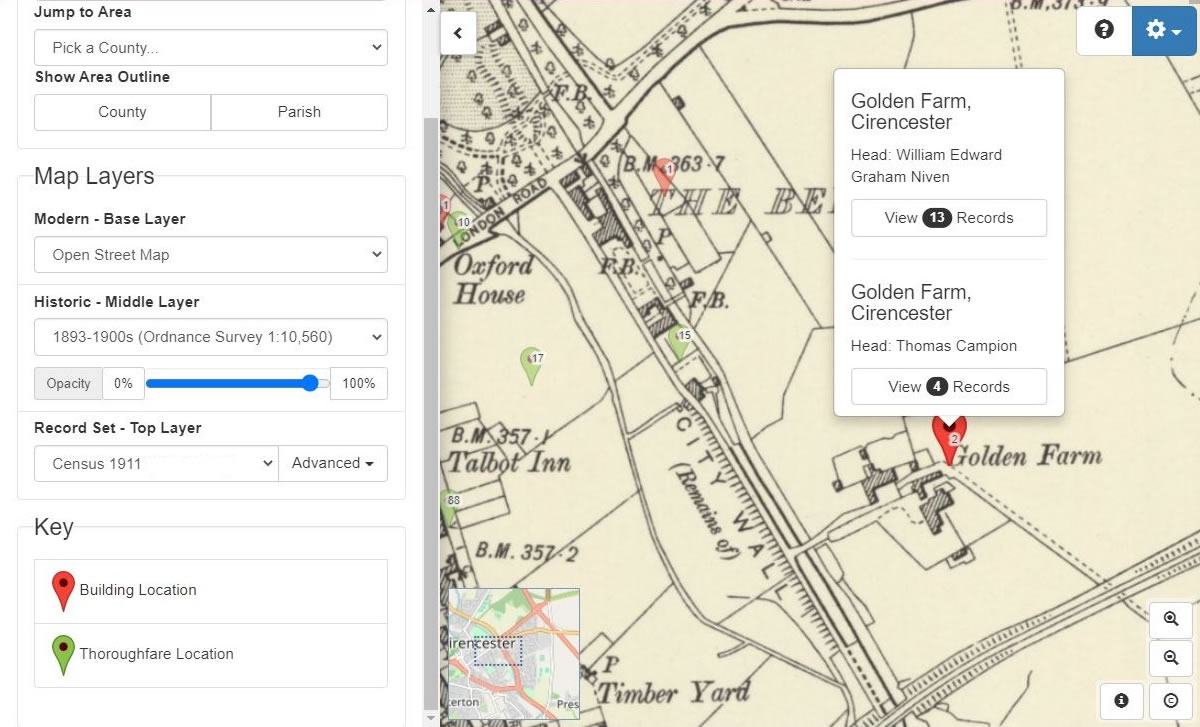 Clicking through to Map Explorer™ locates Golden Farm in 1911 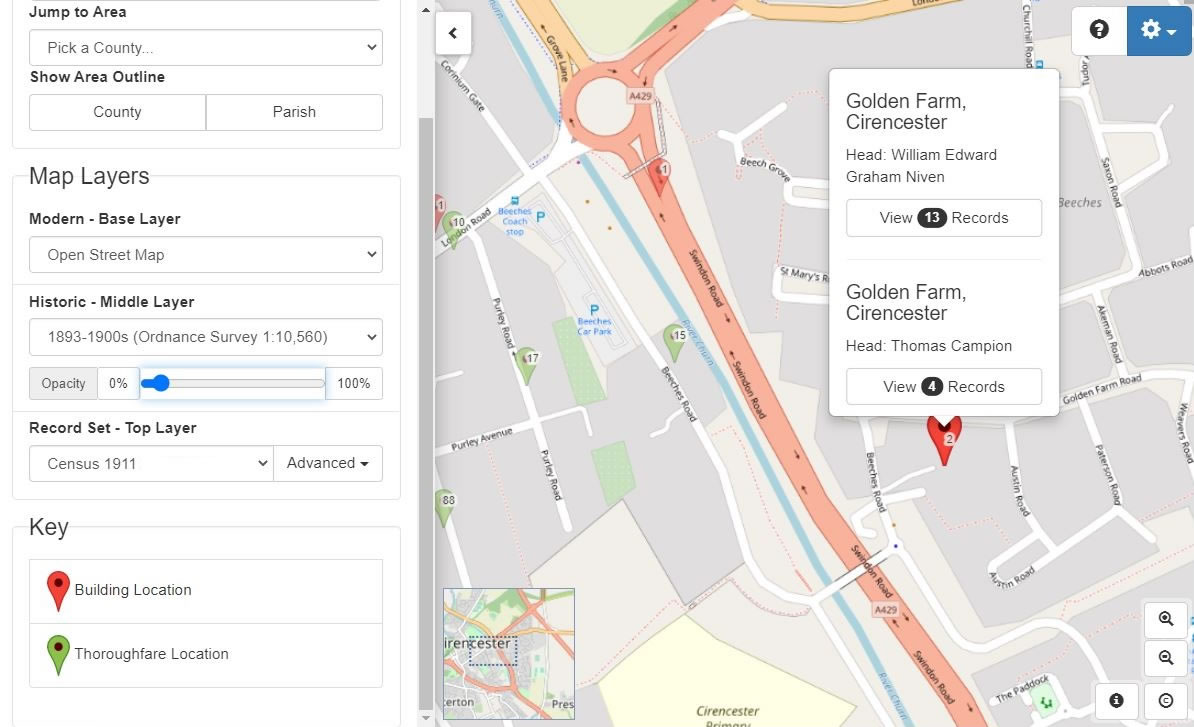 Searching from a Map to discover who lived in a household

There are often times, however, when a researcher approaches their search from the other angle, aiming to discover who lived in a particular property rather than tracing where the property recorded in a census is located. To do this is a simple operation on TheGenealogist by opening up the Map Explorer™, navigating to the area in question and then selecting Census 1911 as the 'Record Set – Top Layer'.

As an example let us look for another 'film star', this time however it's a building. We will search for the very photogenic Leeds Castle that has featured in numerous films and television productions over the years. It has also drawn a great many Hollywood movie stars to its former house parties when it was still in private ownership, and that included David Niven in his day. Searching the area near to Maidstone we have come across the property that we are interested in and we then selected the 'Record Set – Top Layer' to show results on the map from the 1911 census. Clicking on the pin identifying our building of interest reveals that there are 3 households recorded at the castle and we can view each one's 1911 census with a click on the 'View Records' button. This tells us that on the night of the 1911 census the head of the main residence was Mr Conwallis Philip Wykeham Martin. This family owned Leeds Castle in the 19th century, only selling it in 1925. With the aid of this exciting tool we are able to see where a Great British Oscar winning actor began his life in the Cotswolds, 80 or so miles west of London, and where a film director as famous as his actors had lived when just a boy. We have also been able to research from a property location back to see who had been recorded there in the 1911 census results.

The ability to see a neighbourhood around your ancestor's home can give you a greater insight into what the levels of society were where they had lived. Researchers are able to gain a greater understanding from the map of what the employment prospects were in the area and what roads, rail or water links were available to their forebears in order to reach other places. Also of importance is that sometimes close family members may live nearby and so with the maps on Map Explorer™ researchers are able to see what support there may have been for their past family members from their ancestors' own parents, siblings and cousins.

This new feature exclusively on TheGenealogist is an exciting development that allows us for the first time to see under the transcripts for the 1911 census records detailed mapping which shows where our English or Welsh ancestors had lived at that time. The majority of dwellings in London can be seen down to the level of properties marked on large scale plans, while the rest of the country will identify down to homes in parishes, roads or streets.