Alexander Thom – Publisher and The Queen’s Printer for Ireland

The publisher Alexander Thom was born in Scotland around 1801 as the son of the writer and journalist Walter Thom. Alexander went to the High School in Edinburgh before, at the age of 21, he crossed the water to Ireland and in Dublin he then assisted his father in the management of the Dublin Journal.

According to the Dictionary of National Biography his father, Walter Thom (1770-1824), miscellaneous writer, was born in 1770 at Bervie, Kincardineshire, and afterwards moved to Aberdeen, where he established himself as a bookseller. In 1813 he then made the move to Dublin as the editor of the Dublin Journal. Walter Thom died in that city on 16 June 1824. He was the author of a History of Aberdeen (Aberdeen, 1811) and of a treatise on Pedestrianism (Aberdeen, 1813, 8vo). He also contributed to Brewster's Encyclopaedia, to Sinclair's Statistical Account of Scotland, and to Mason's Statistical Account of Ireland.

When his father died in 1824, Alexander then managed to obtain the contract for printing for the post office in Ireland with the influence of Sir Robert Peel. By 1838 Thom had been given the contract for the printing of all royal commissions in Ireland, and in 1876 he was then appointed to the post of Queen's Printer for Ireland. Thom lived the rest of his life in Ireland, marrying twice and dying at his home, Donnycarney House, near Dublin, on 22 December 1879.

Alexander Thom is perhaps best known for the Irish Almanac and Official Directory, which became a leader in its field. He began publishing this title in 1844 and then oversaw its publication for over 30 years, eventually passing the copyright to his son-in-law Frederick Pilkington in 1876. Pilkington, the Government book binder in Ireland, whose premises were next door to Thom's four-storied building in Middle Abbey Street, married Margaret Thom, the eldest daughter of Alexander. Eventually the two firms merged and became the Queen's Printing Office because of Thom's appointment as printer in Ireland to Queen Victoria. 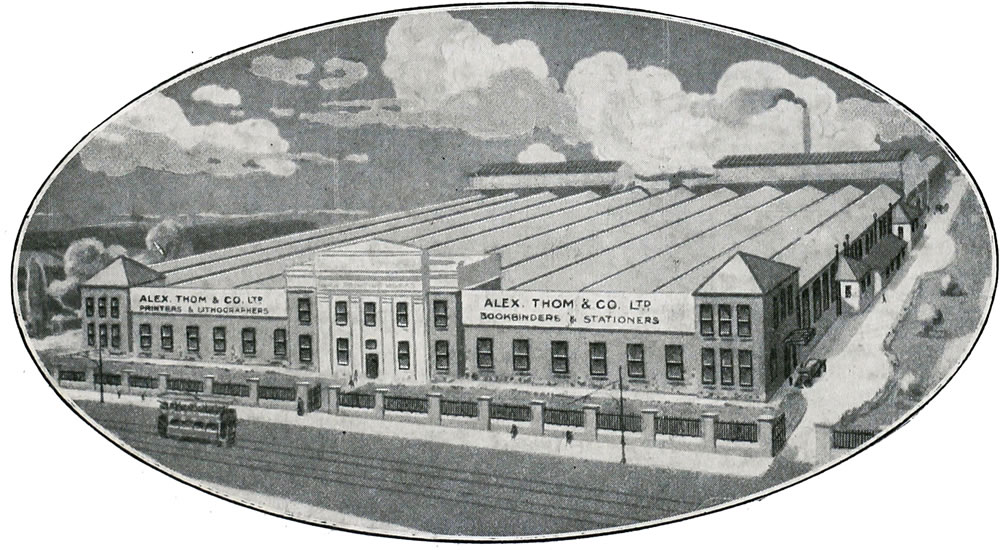 It was not only Thom's Directories that he produced, as in 1860 he was responsible for publishing A Collection of Tracts and Treatises Illustrative of the Natural History, Antiquities, and the Political and Social State of Ireland, which were distributed for free. The two volumes contain reprints of works by various writers on Irish affairs in the seventeenth and eighteenth centuries. Among these writers were such names as James Ware, Edmund Spenser, Sir John Davies, William Petty, George Berkeley, and others such as Gerard Boate, Thomas Prior and Arthur Dobbs.

The Irish Almanac and Official Directory publication incorporated statistics relating to Ireland and was revised annually until in 1960 it was split into Thom's Dublin Street Directory and Thom's Commercial Directory. With this change the two directories were then revised in alternate years up until 2012.

TheGenealogist has released various Thom's Official Directories covering the United Kingdom of Great Britain and Ireland from Victorian times up to the 20th century, into its extensive Trade, Residential and Telephone Directories collection. These records are great for discovering more about the towns and areas, finding the names of people who held official municipal or government offices, or were professionals such as doctors, clergy, etc. You can also use these books to find Irish businesses from manufacturers.