Not all of our ancestors would have been able to vote in the past as universal suffrage was not the norm in England and Wales with wealth and property qualifications deciding who could cast their ballot. It was not until the end of the First World War that all adult men were enfranchised by the Representation of the People Act 1918. This Act also granted women over 30 the right to vote in national elections, however it still excluded a large proportion of women; those under 30 or those who did not meet the property restrictions that accounted for approximately 60% of the female population. It was not until the Equal Franchise Act 1928 granted women the vote on the same terms as men. Twenty years later and The Representation of the People Act 1948 finally removed plural voting rights held by about 7% of the electorate and then The Representation of the People Act 1969 reduced the voting age from 21 to 18.

TheGenealogist has a collection of Poll and Electoral Roll records that can be a useful resource to find a forebear who was enfranchised. These searchable books are invaluable when we want to discover addresses, especially before the census years. Published Poll Books extend as far back as the 1700s and were still being published in 1872 when The Ballot Act of that year introduced the secret ballot. From a modern point of view the fact that some of our ancestors would have had a vote in more than one place, until this was abolished by the Representation of the People Act 1948, is a strange state of affairs. Up until this date property owners could vote not only in the constituency where they owned property but also in the one in which they lived. 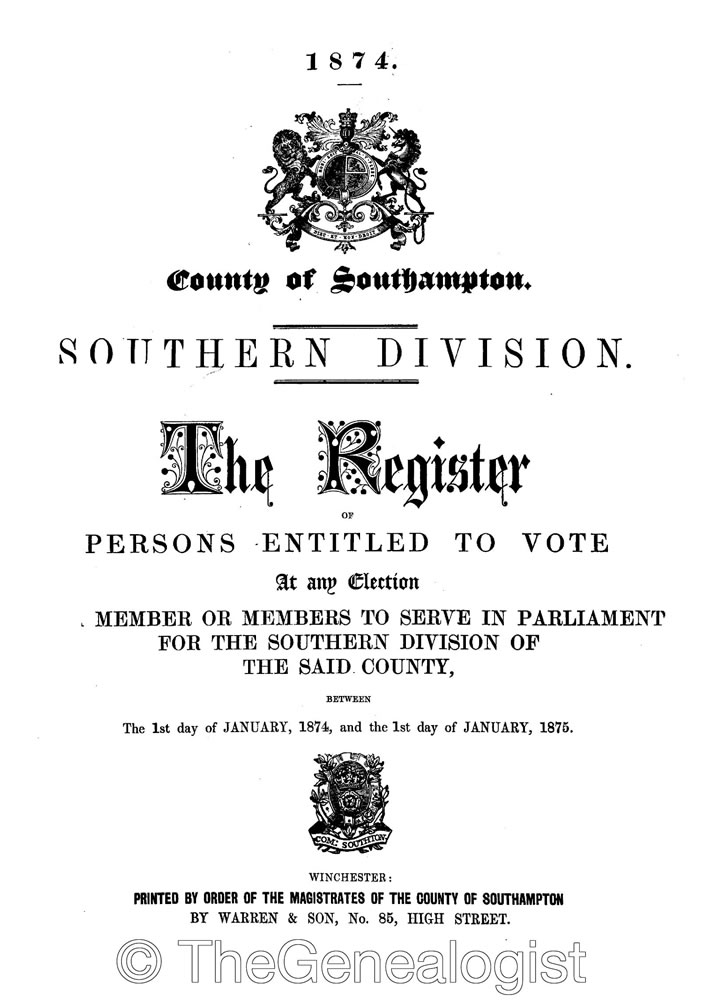 Using an 1874 Poll Book to find an address

The most recent release has added a number of areas and dates, one of which is for Southampton in 1874-1875. 'The Register of Persons Entitled to Vote at Any Election of a Member or Members To Serve in Parliament for the Southern Division of the Said County' includes a distant relative of the actor, Benedict Cumberbatch. Lawrence Henry Cumberbatch, from a search of the Poll and Electoral records, was listed as a voter in the Totton Polling district. He was qualified to vote in any parliamentary elections in the county because he was an occupier of a house and land with a rateable value of £12 and upwards. We can read that Lawrence's place of abode was at Queen's House, Lyndhurst and this was also the property that gave him his entitlement to vote as he paid rates on it. 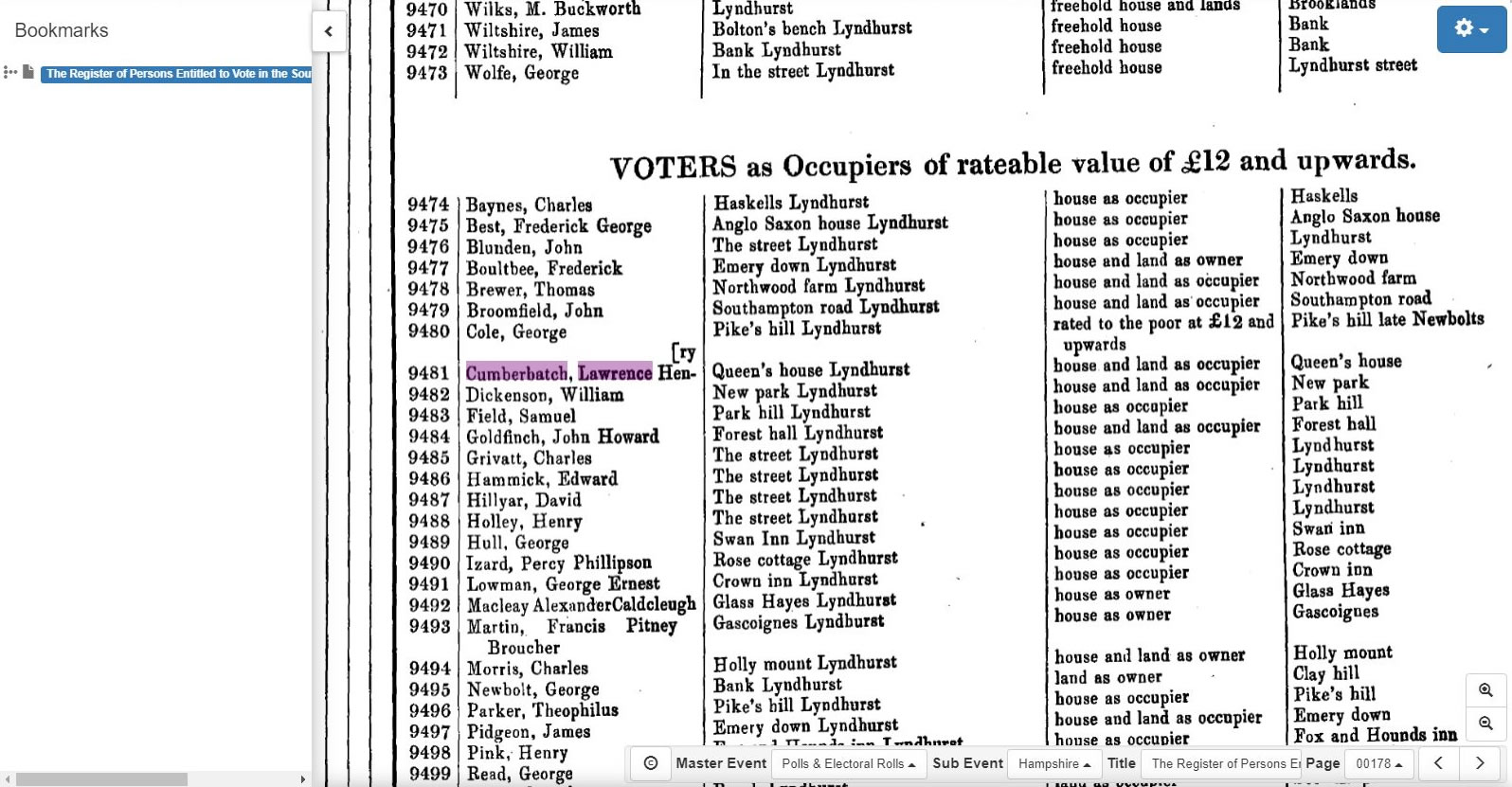 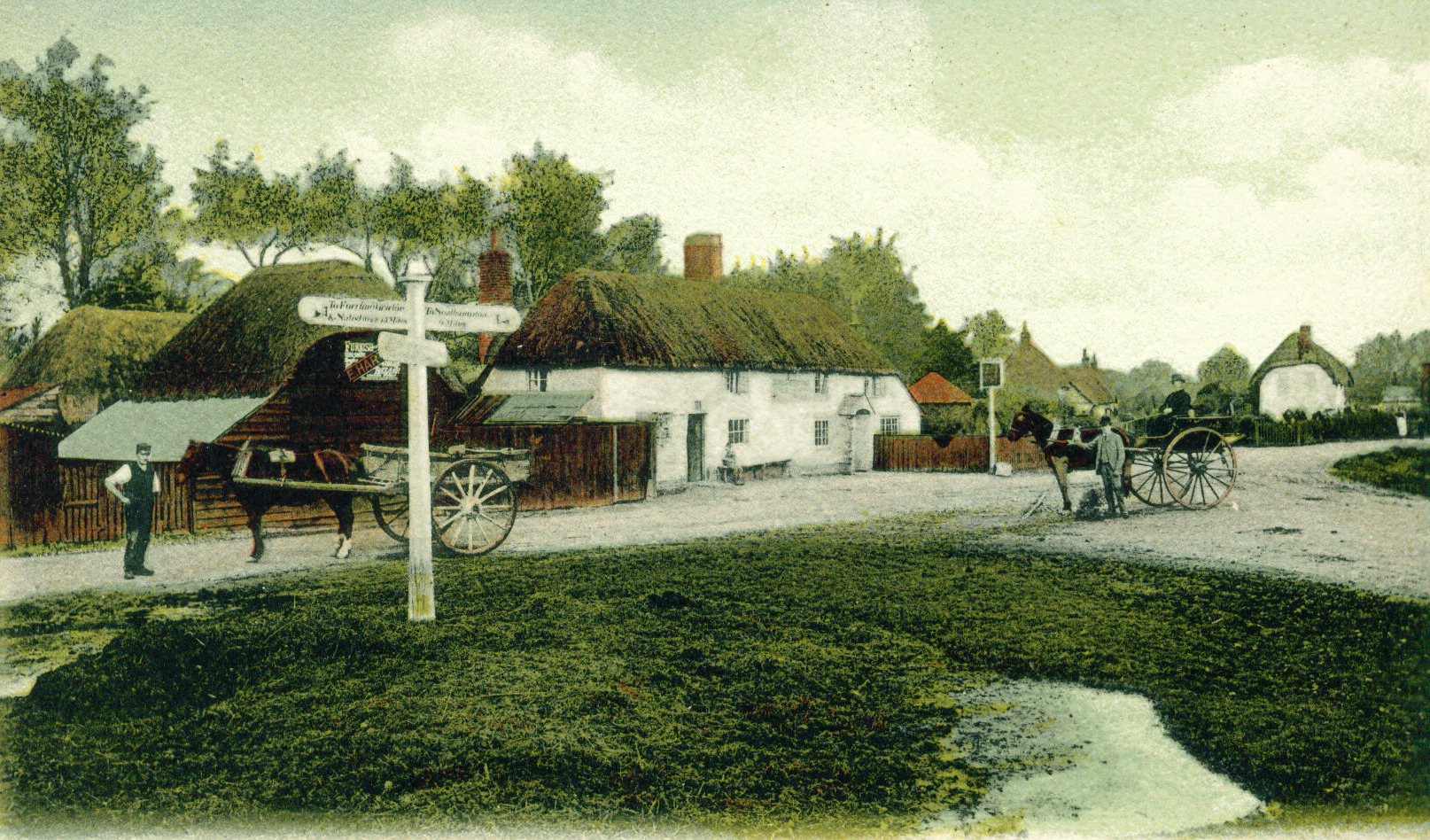 Lawrence Henry Cumberbatch was born in 1827 and he lived until 1885. Between 1849 and 1879 he was the Deputy Surveyor of the New Forest. His father was Abraham Parry Cumberbatch (1784–1840) who is also the 3x great grandfather of Benedict Timothy Carlton Cumberbatch, the English actor famous for his appearances in film and television. Lawrence had an elder brother, Robert William Cumberbatch whose line Benedict is descended from.

Benedict, himself, is also featured in TheGenealogist's Polls & Electoral Rolls records as included in this collection is the 2005 London Electoral Roll. Thus we are able to see a range of records which reveal the addresses of two members of the same family though some 131 years apart. 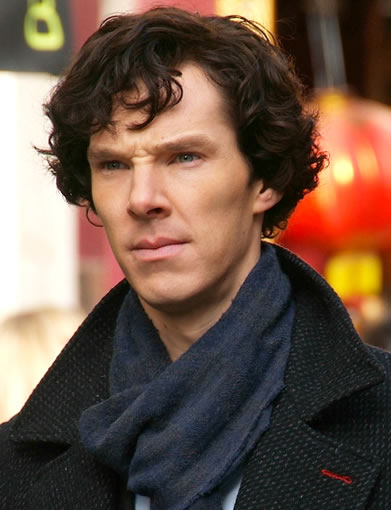 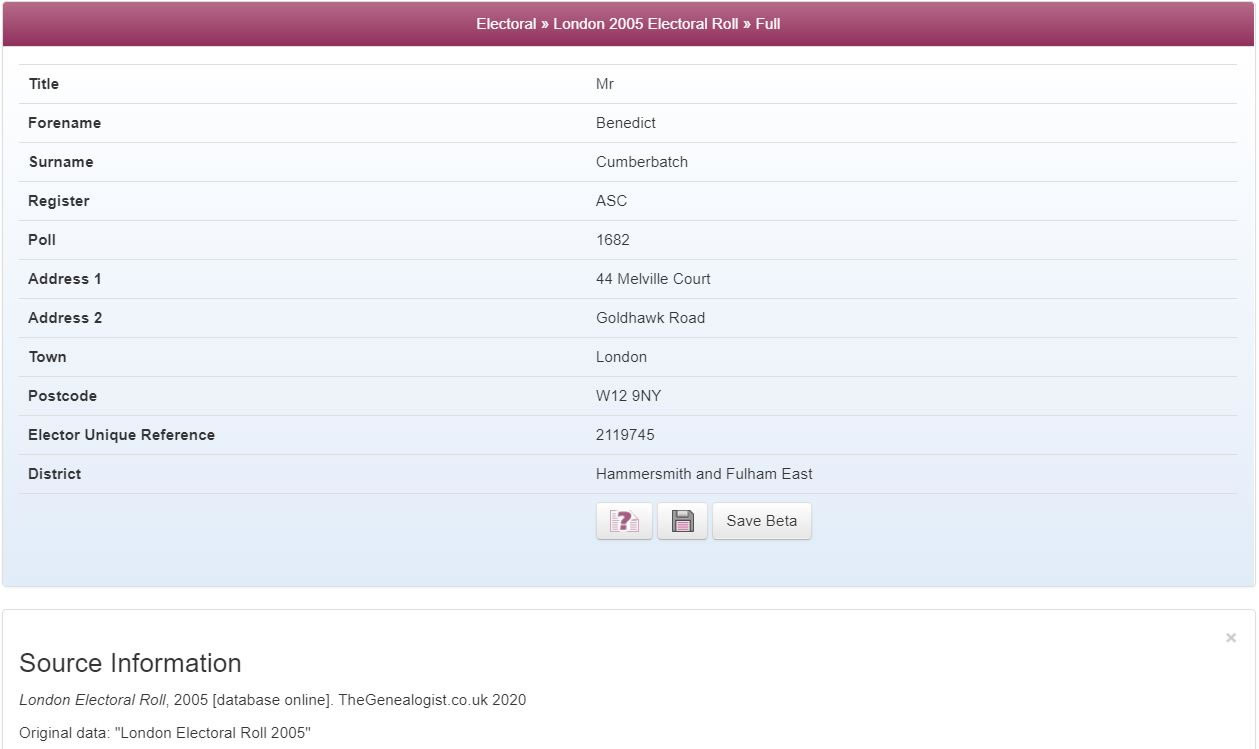 These Poll & Electoral Roll records can be used to find where ancestors who had a vote lived. The major benefit of finding an ancestor in this collection is that they cover various periods when there is no census record for the researcher to use, or are between the decennial census dates.