Norfolk is famous for a largely flat landscape which the winds can blow across unimpeded. It therefore makes perfect sense for this East Anglian county to be home to a number of windmills, similar to its continental neighbour, Holland.

In the 11th century, when the Domesday survey was taken after the Norman Conquest, there were around 580 watermills recorded in Norfolk, but no windmills at all! Historians believe that, in Norfolk, the earliest known windmill was recorded in 1268 at Rackheath and the earliest identified windmill site was at Barton Bendish in 1338. Earlier than this a Thomas Thurne had given a windmill in Waxham to Hickling Priory c.1190 according to the Norfolk Mills website. 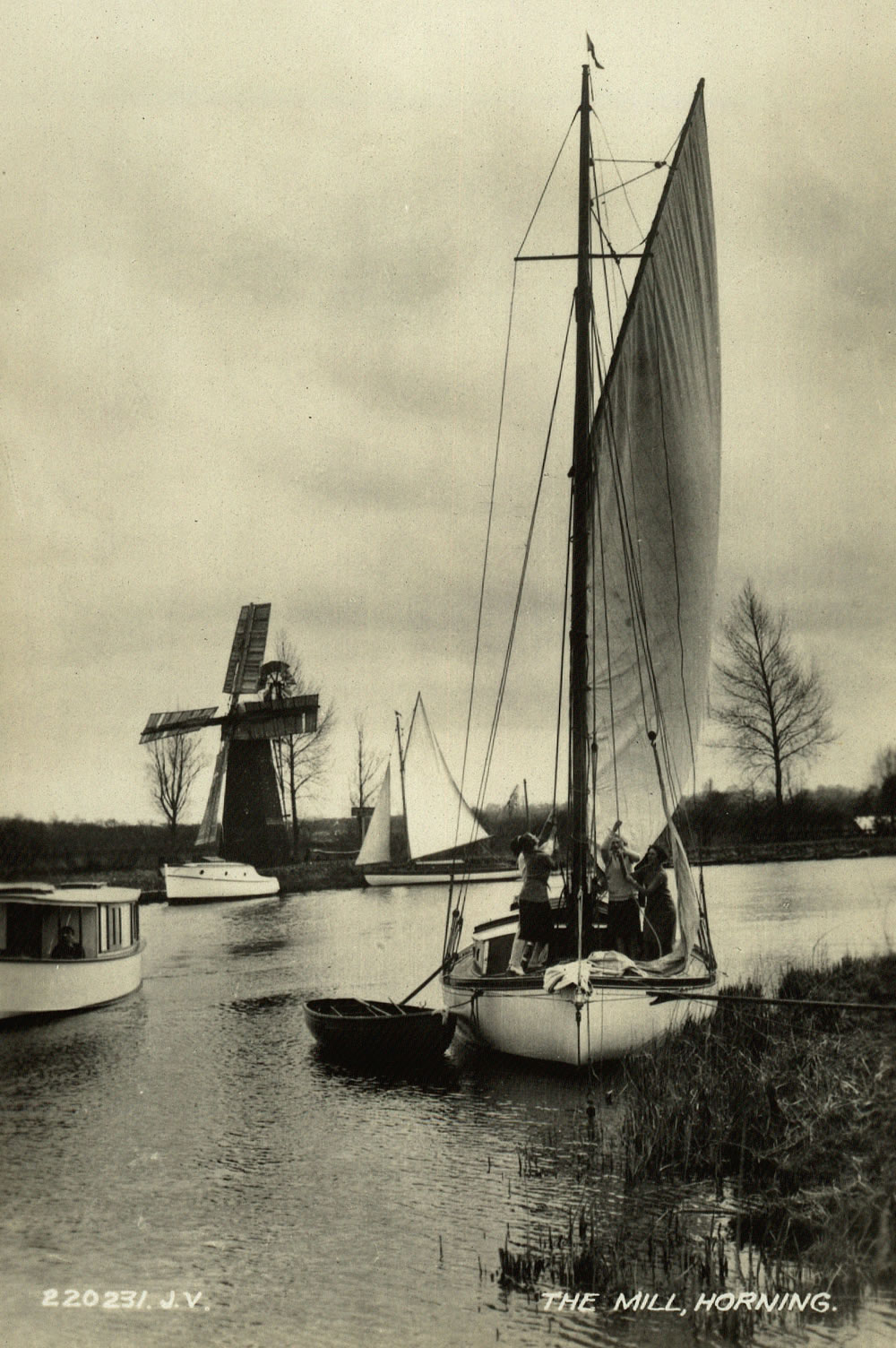 Gradually wind power became more popular than water and by the early 19th century only 80 or 90 watermills were still up and running, while there were 300 - 400 windmills milling across Norfolk. Changes in what the public wanted in their flour meant that by the late 1800s stone ground flour, such as that which was produced by both the water and windmills, was now being replaced by grain ground by using modern roller mills. This new technology meant that flour could now be milled more efficiently and faster than had been possible using the old water or windmills. This must have been devastating for the local millers, as part of their livelihood was taken away.

The mill at Docking had been recorded in 1803 as a postmill (a windmill supported by a post on which it pivots to catch the wind) when it was put up for sale in the Norfolk Chronicle in June 1803 as part of an estate, according to the Norfolk Mills website. Then in 1821 the mill was replaced by a new postmill on the same site.

To find out more about the people who provided their local community in Docking with milled grain, we can turn to parish records to see if we can identify the miller and his family.

In the parish register for 1818 that can be found on TheGenealogist, we see the baptism of the miller's daughter, Elizabeth Hebgin on 4th October. The parents are Robert Hebgin, whose occupation is recorded as 'Miller', and his wife Elizabeth.

Another entry in the Docking parish registers finds the marriage of Robert and Elizabeth the year before their child Elizabeth's birth. The marriage was by licence and took place on 22nd August 1817 in Docking Church. 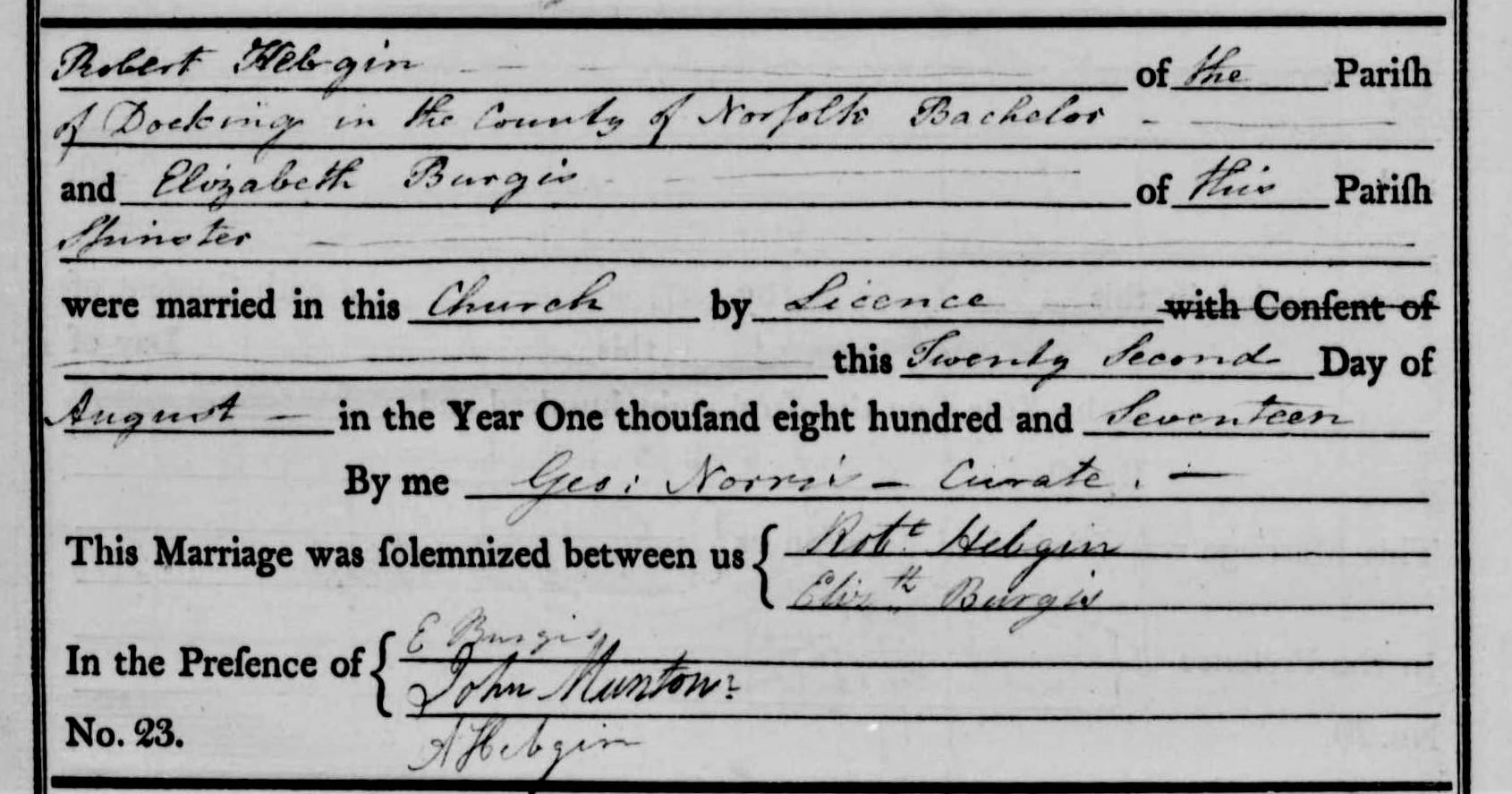 We cannot be sure how Robert Hebgin learnt his trade as a miller, but in the apprenticeship records on TheGenealogist we can also discover something of his background. A search for Robert finds that he had been apprenticed to Jno Hull, a grocer in Docking, for 6 years from 14th January 1806. This points to Robert having been released from this apprenticeship by 1812 – and so perhaps he took on the mill around this time. 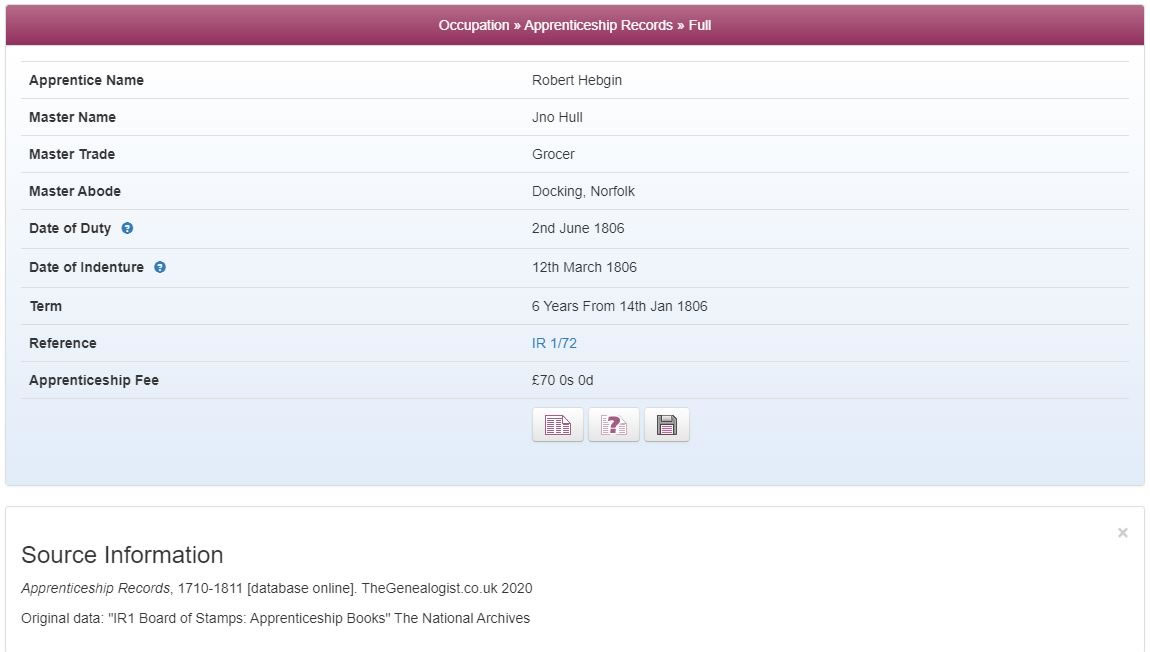 Apprenticeship records from 1806 on TheGenealogist

By 1824 Robert Hebgin was advertising for a Journeyman Miller to apply to him for a job at the mill, and then again in 1828. By 1841 he and Elizabeth appeared in the census records that can be searched on TheGenealogist as a Farmer; and by 1851 he is recorded as a Dealer in Cattle. The Mill had now passed to the Burgis family, as further searches of TheGenealogist reveals. By the time that the Tithe Commissioners surveyed this part of Norfolk on 19th November 1840, the Mill was now occupied by Richard Burgess (sic). The surveyor even drew a four sailed windmill on his map that pinpoints the location to the outskirts of Docking.

While this miller's name in the Tithe records was written down as 'Burgess', a look at the 1841 census finds three Burgis brothers, all in their 20s, who shared the same home. Richard, the Miller is 26 and his elder brother John, 27, is a farmer while Robert, their younger 20 year old brother, is a butcher.

In other records from the Norfolk Chronicle published on the 12th October 1839 their father, also named Richard and identifying himself as Miller and Butcher, had placed some words in the paper advertising that he had handed over both sides of his business to his sons Richard and Robert. 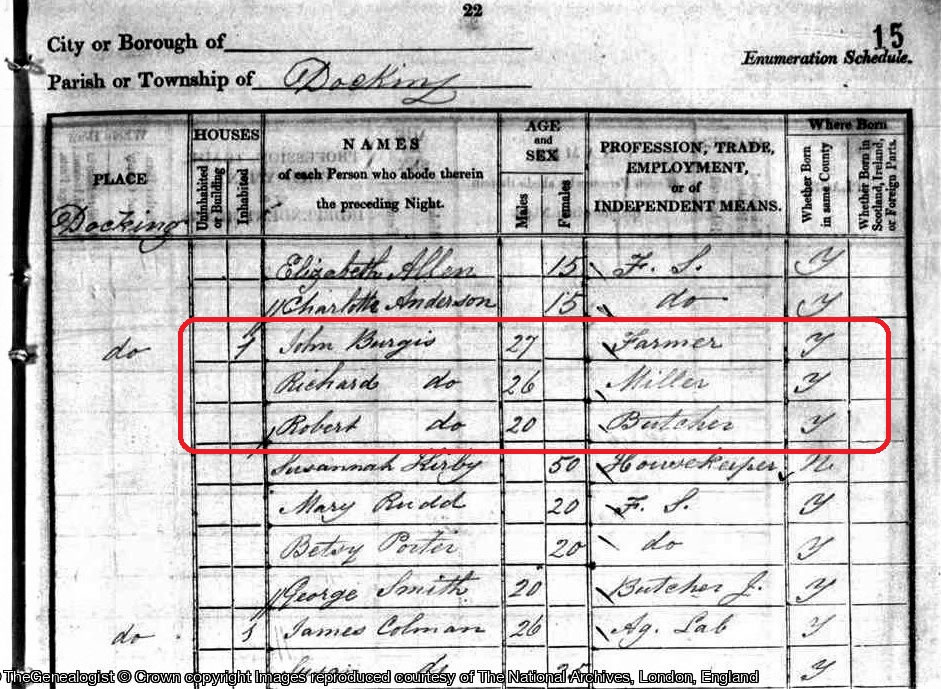 The 1841 census of Docking has already shown us that the Hebgins remained in the area, becoming farmers and eventually making a living dealing in cattle. The 1851 census gives us Elizabeth's date of birth as 1790, not in Docking but about twenty miles away in Foulsham. While the Parish Registers for her marriage and the baptism of her daughter had identified her as a Burgis, the Burgis family who then took on and ran the mill in the mid-1800s were born in Docking itself.

Transcript of the baptism of Elizabeth Burgis 31 August 1790 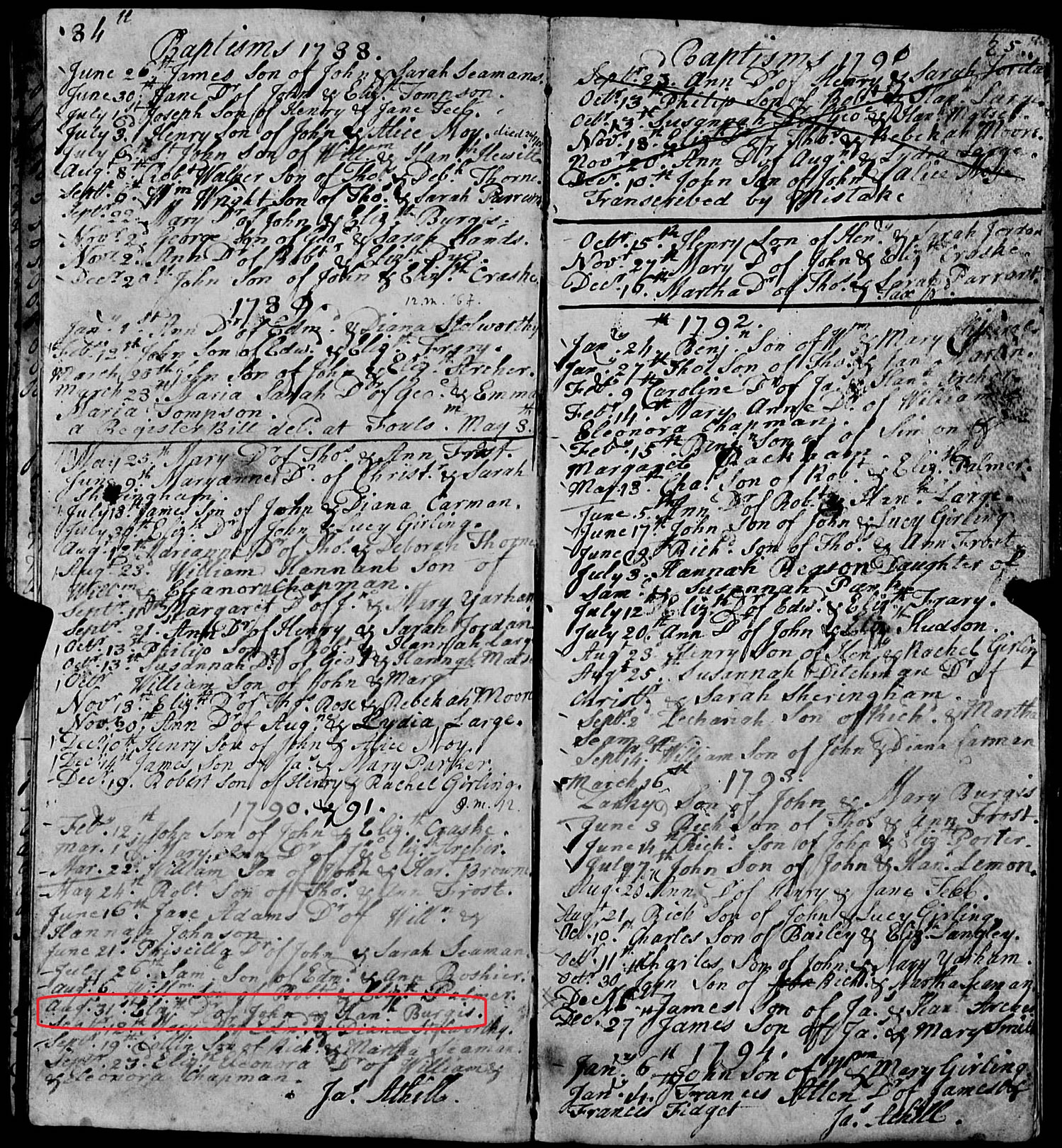 The page of the Foulsham register is more difficult to read as it is in the pre-1812 format before the introduction of printed books. It is, however, fully searchable on TheGenealogist and the transcript helps to reveal that her parents were John and Hannah Burgis. A lot more research will be needed to discover if these two Norfolk families are related in any way as the Richard Burgis who took on the mill was baptised in August 1815 in Docking and was the son of a Richard and a Hannah Burgis. The parish register recorded that his father was a butcher and reveals that both the mother, Hannah and the father had shared the same surname before their marriage. By using the SmartSearch™ for Parent's Potential Marriage from TheGenealogist's transcription we are able to identify their marriage in Docking's Parish register on 17th May 1813. 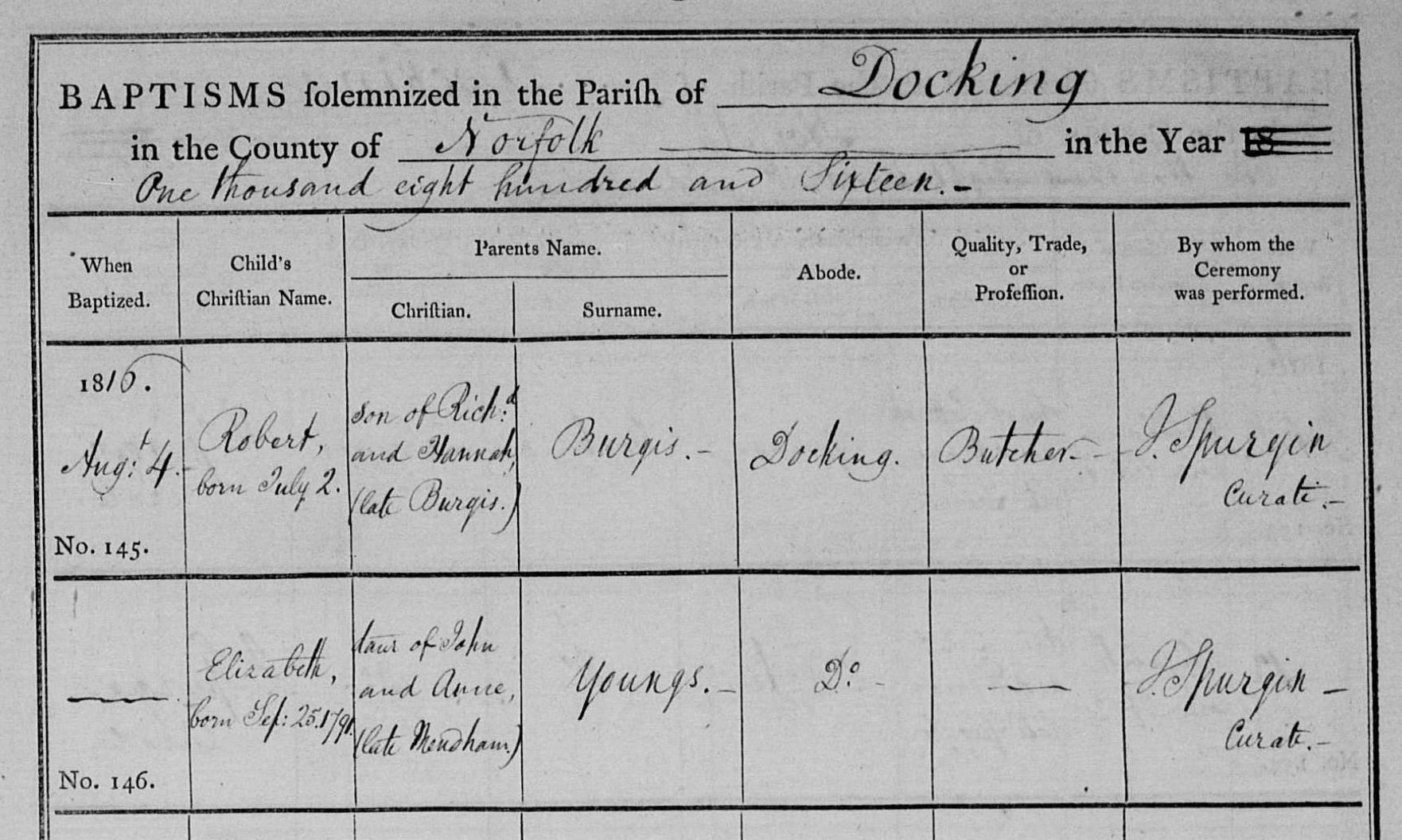 The parish records for Norfolk on TheGenealogist have enabled us to see that the millers from the Windmill at Docking took on the mill after serving as grocers, butchers and farmers in their village community.