The Ducal Villa once the retreat of Georgiana, Duchess of Devonshire that became a "Lunatic Asylum" before the First World War and a Fire Station in World War 2 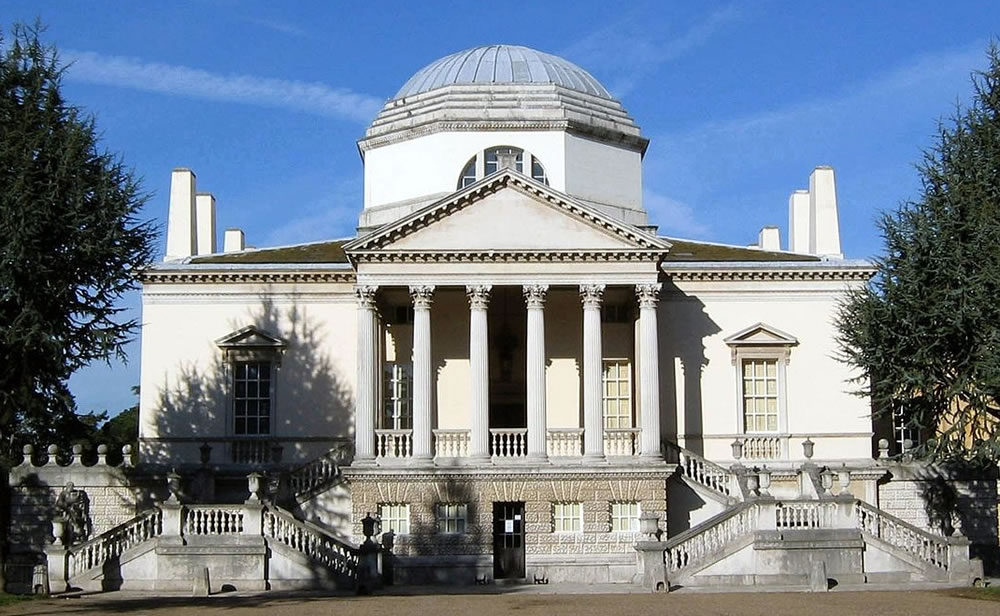 The Lloyd George Domesday records on TheGenealogist are constantly being added to as new areas are released with Field book records linked to large scale Ordnance Survey maps on the Map Explorer™. This powerful resource means that the family history researcher can make use of georeferenced historical maps that can be overlaid with several modern background maps including Ordnance Survey, Open Street Maps and a satellite view. The Lloyd George Domesday survey maps from the Valuation Office survey carried out from 1910 to 1915 are one of the map sets that can be selected in Map Explorer™. With field book data linked to these maps, this collection allows researchers to see how the lie of the land has changed since 1910. Redevelopment, wartime bomb damage and intervening road building all contribute to the modern topography often being completely different from how it was when our ancestors lived in the area and modern maps may fail to identify renamed or extinguished roads.

Hounslow records cover the areas of Bedfont, Chiswick, Cranford, Feltham, Hanworth, Heston, Isleworth, New Brentford and Old Brentford. And it is in Chiswick that we can locate Chiswick House with its quirky history. The Map Explorer™ immediately allows us to see that the grounds still occupy mostly the same footprint today as it did in Edwardian times. We can also see that today the Great West Road has cut a swathe through some of the houses that once stood along the Ellesmere Road and Hogarth Lane whose paths it more or less follows.

Chiswick House is a marvellous example of Neo-Palladian architecture in London, the house having been built and designed by Richard Boyle, 3rd Earl of Burlington (1694-1753), and completed in 1729. The house and gardens together are spread over 26.33 hectares (65.1 acres) in West London; the grounds, being one of the earliest examples of English Landscape gardens, were mainly set out by the architect and landscape designer William Kent.

After the death of the Earl of Burlington in 1753 and the subsequent deaths of his last surviving daughter, Charlotte Boyle in 1754, and his widow in 1758, the property was ceded to William Cavendish, 4th Duke of Devonshire, who had been Charlotte's husband. With William's death in 1764, the villa then passed down to his and Charlotte's orphaned young son, William Cavendish, 5th Duke of Devonshire. This was the Duke of Devonshire who married Georgiana Spencer, a prominent and controversial figure in fashion and politics whom he married in 1774. Georgiana used the house as a retreat and as a Whig stronghold for many years. The house was the place of death of Charles James Fox in 1806 and the Prime Minister George Canning also died there in 1827. 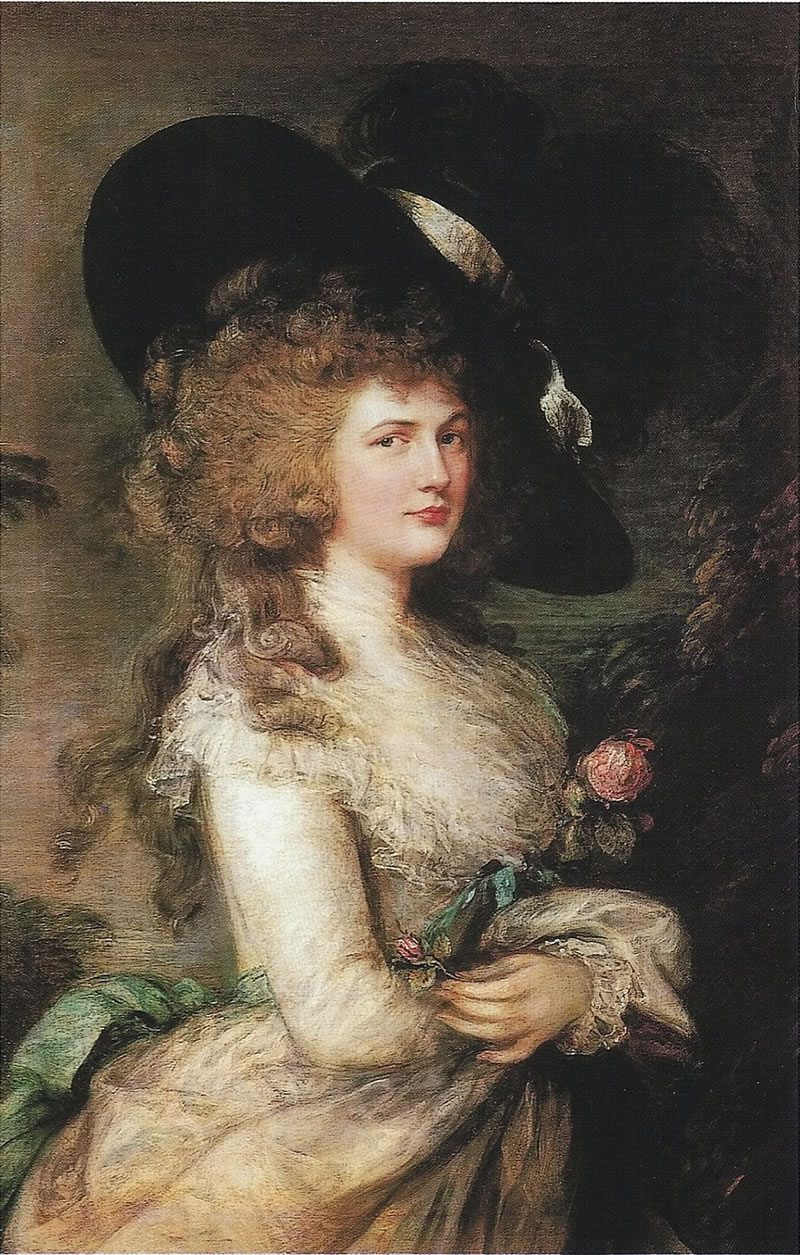 Portrait of Georgiana, Duchess of Devonshire by Thomas Gainsborough

During the 19th century Chiswick House fell into decline, and was rented out by the Cavendish family. It was at this time that the government of Lloyd George instituted the property survey in which we find that the copyholder is Dr Thomas Seymour Tuke, the licensee of a private "lunatic asylum" (mental hospital). In 1929, the 9th Duke of Devonshire sold Chiswick House to Middlesex County Council, and it then became a fire station for a while during the Second World War. The villa suffered some damage during that war, and in 1944 a V-2 rocket damaged one of the two wings. The wings of the house were then demolished in 1956 and we can see this change by using the Map Explorer™ to view the footprint of Chiswick House. Using the opacity control to fade between the historical Lloyd George Domesday record map, from around 1910, and then comparing it with the modern map the change can be seen.

An image that can be found online at Wikipedia shows a plan of the house at the time that it was used as an asylum. 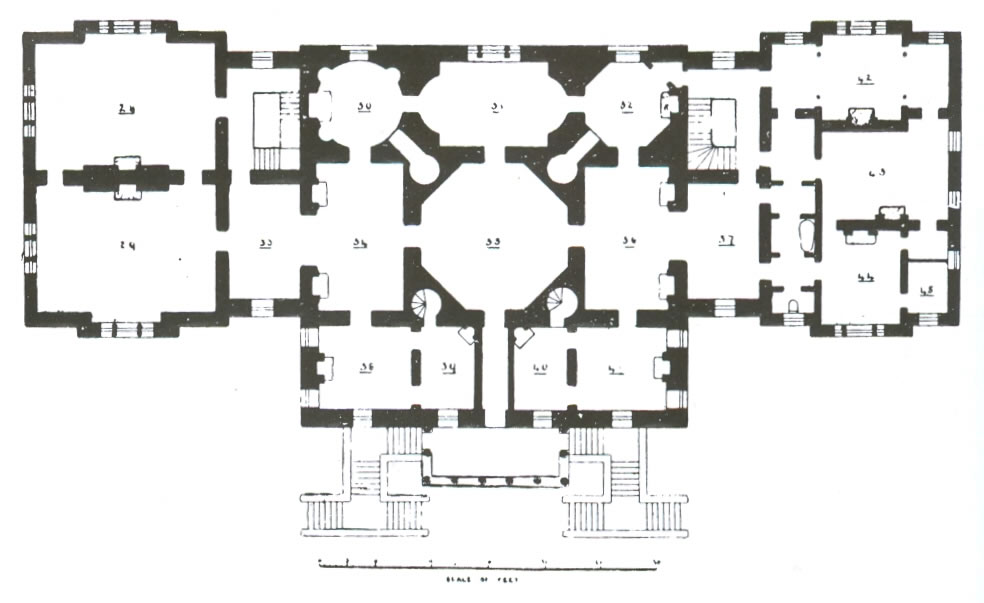 Today, the house is a Grade I listed building that can usually be visited and is maintained by English Heritage.

In 1910, at the time that the surveyor for the Valuation Office came to call at Chiswick House, the lodges, grounds, stabling and outbuildings, were all occupied by Thomas S Tuke. Meanwhile the owner was recorded to be: The Most Nobel Victor Christian Willaim, Duke of Devonshire.

The Tuke family had been providing care for the mentally ill in their private institution for many years. Previously their asylum was based at the Manor House in Chiswick Lane from 1837 to 1892 and after that it moved to Chiswick House until 1928. Thomas S Tuke, who provided the surveyor with the details, was Dr Thomas Seymour Tuke the grandson of one of the original founders Edward Francis Tuke MD, of Dublin who with his brother-in-law, Robert Bell opened the institution. It then passed to Dr Thomas Harrington Tuke, Edward's son. Two of Dr Harrington Tuke's sons also became doctors: Dr Thomas Seymour Tuke (1856-1917) and Dr Charles Molesworth Tuke (1857-1925), who were in place at the time of the Lloyd George Domesday Survey. 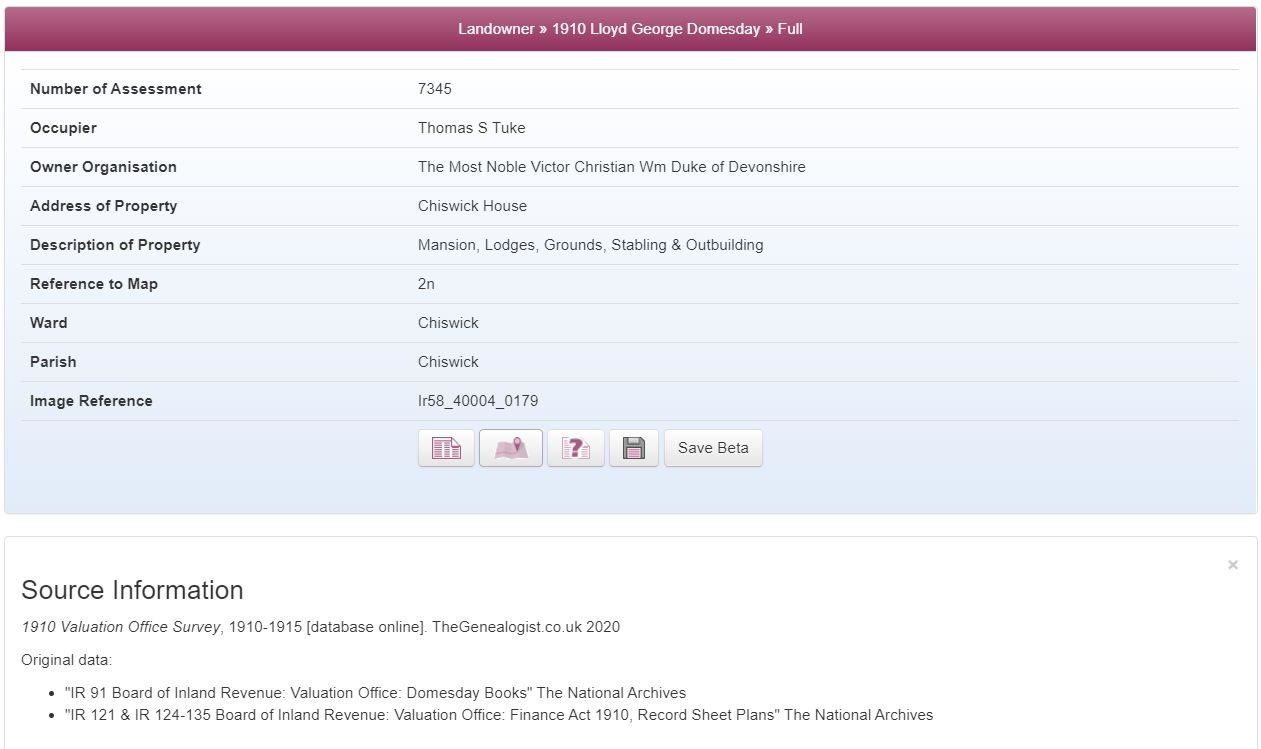 The particulars in the field book records that it was a "Fine old historic mansion and grounds with summer house, stabling and outbuildings. 2 Houses now connected and used as a private lunatic asylum. Went over part of the buildings and the grounds with Dr Tuke and was informed that the total number of rooms was 124" 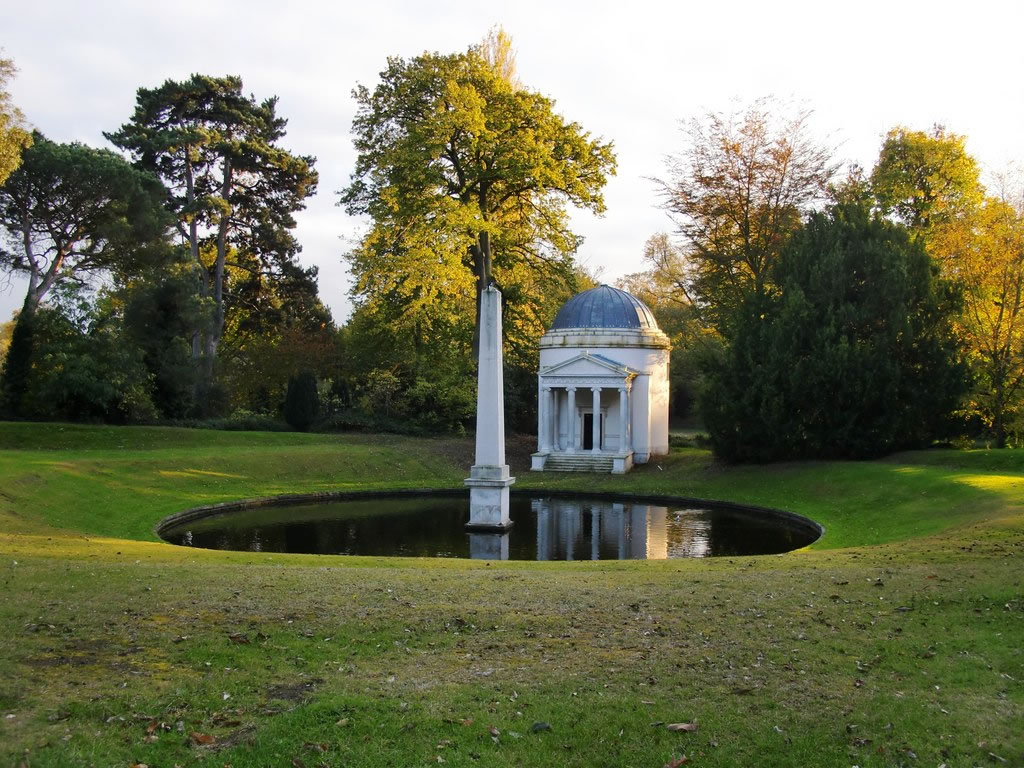 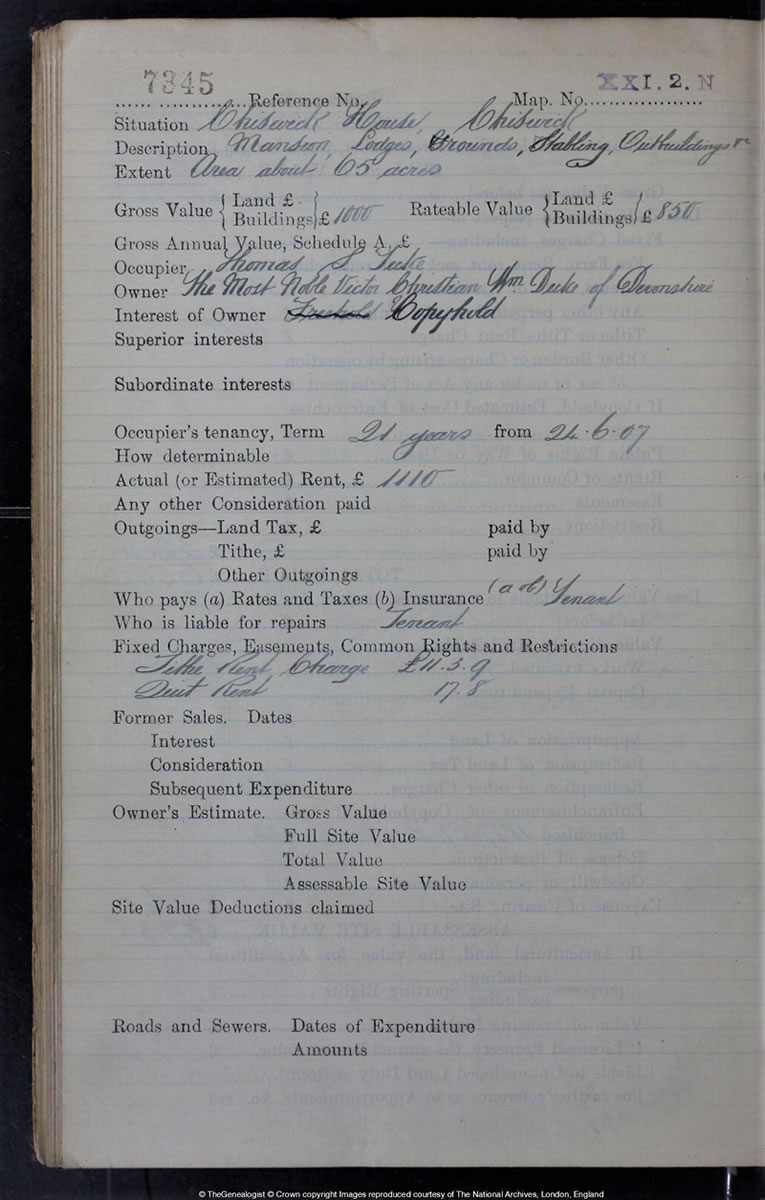 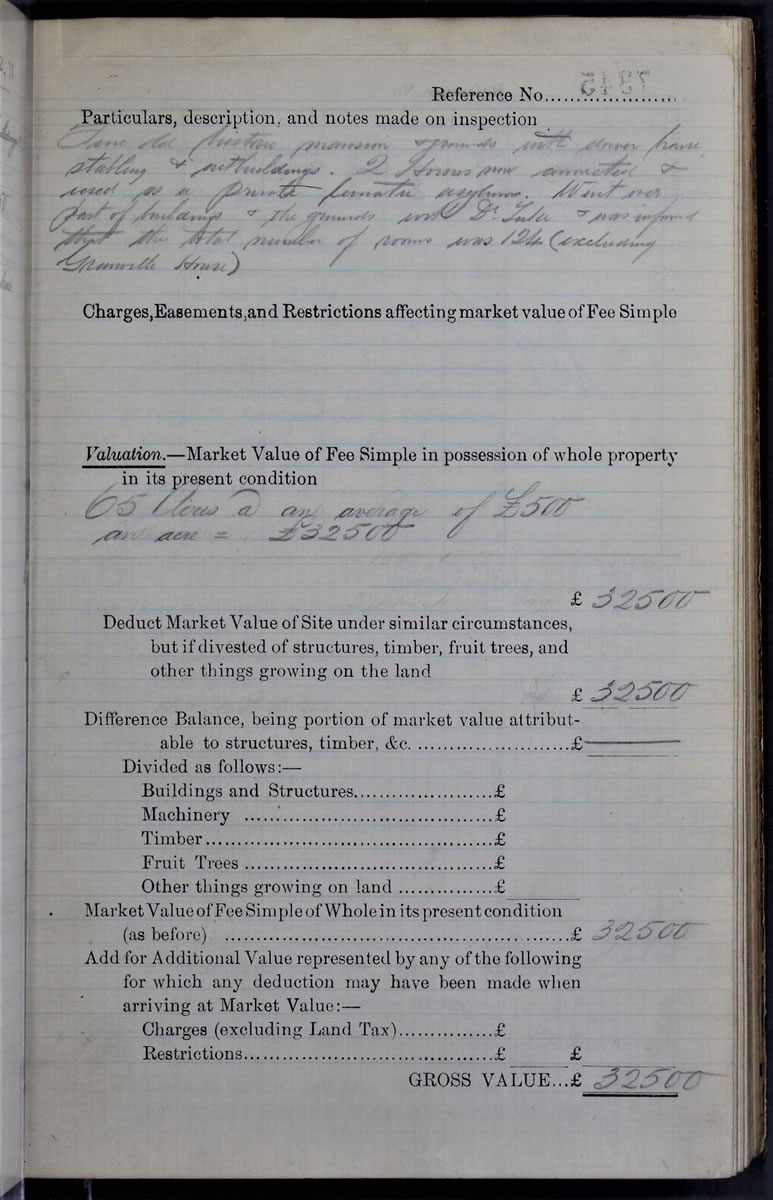 The Doctors Tuke found in other records

Thomas, the elder of the two brothers, and his wife would seem to have lived at Chiswick House itself, as we can see from the 1911 census on TheGenealogist. 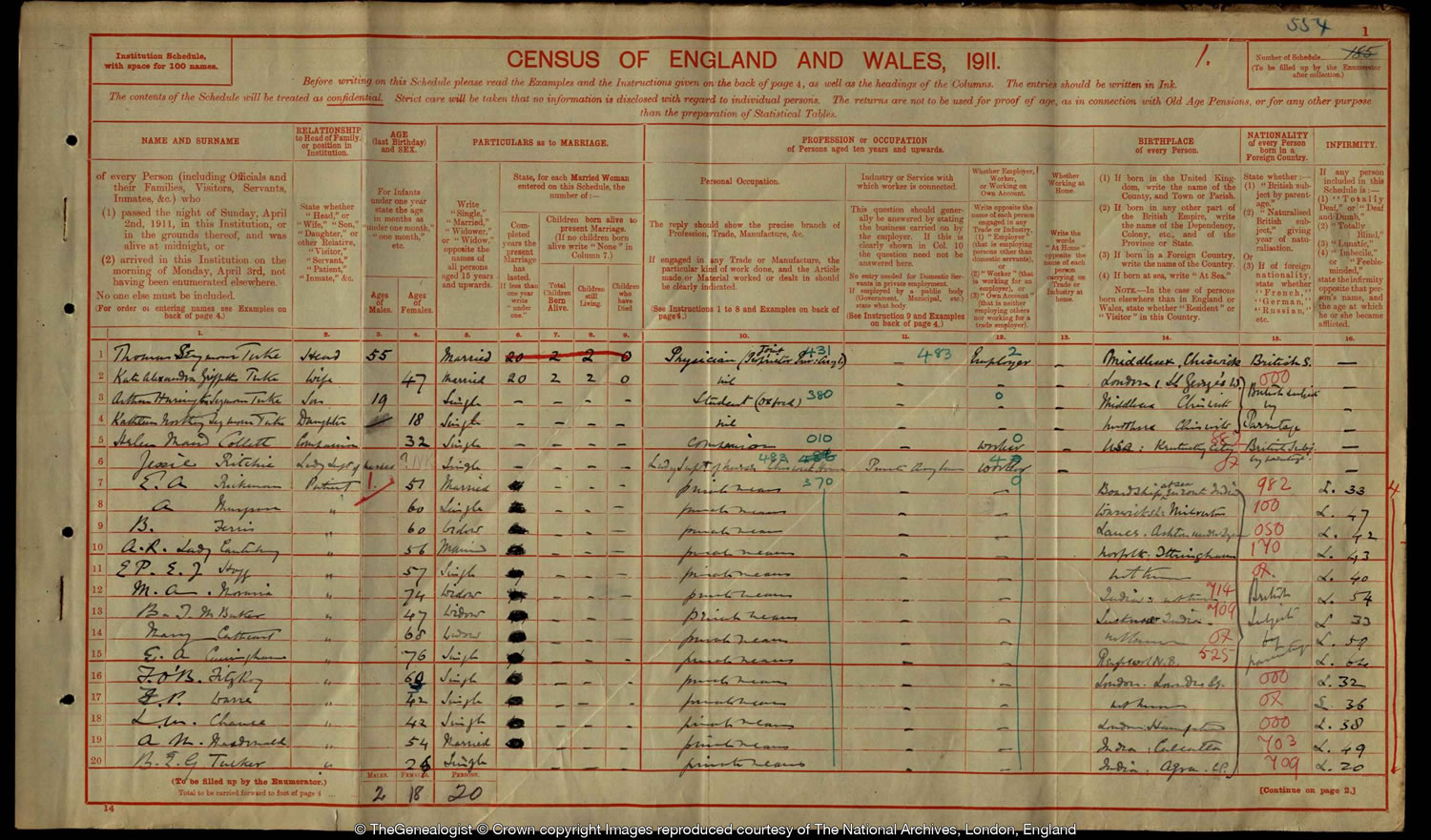 Dr Charles M Tuke and his wife are then to be found at The Gate House in the grounds. After both the doctors had passed away, and the Duke of Devonshire wished to sell the property to the Middlesex County Council, it would seem that Mary E Tuke, the widow of Dr Charles, was able to purchase her home, The Gate House. This we can discover from an altered apportionment in the Tithe Record Collection on TheGenealogist that splits her property from the rest of Chiswick House and grounds. This document, dated 18th September 1929, lists her as the landowner of 1254A, which on the attached plan is the Gate House while the Council are the owners of 1261A. 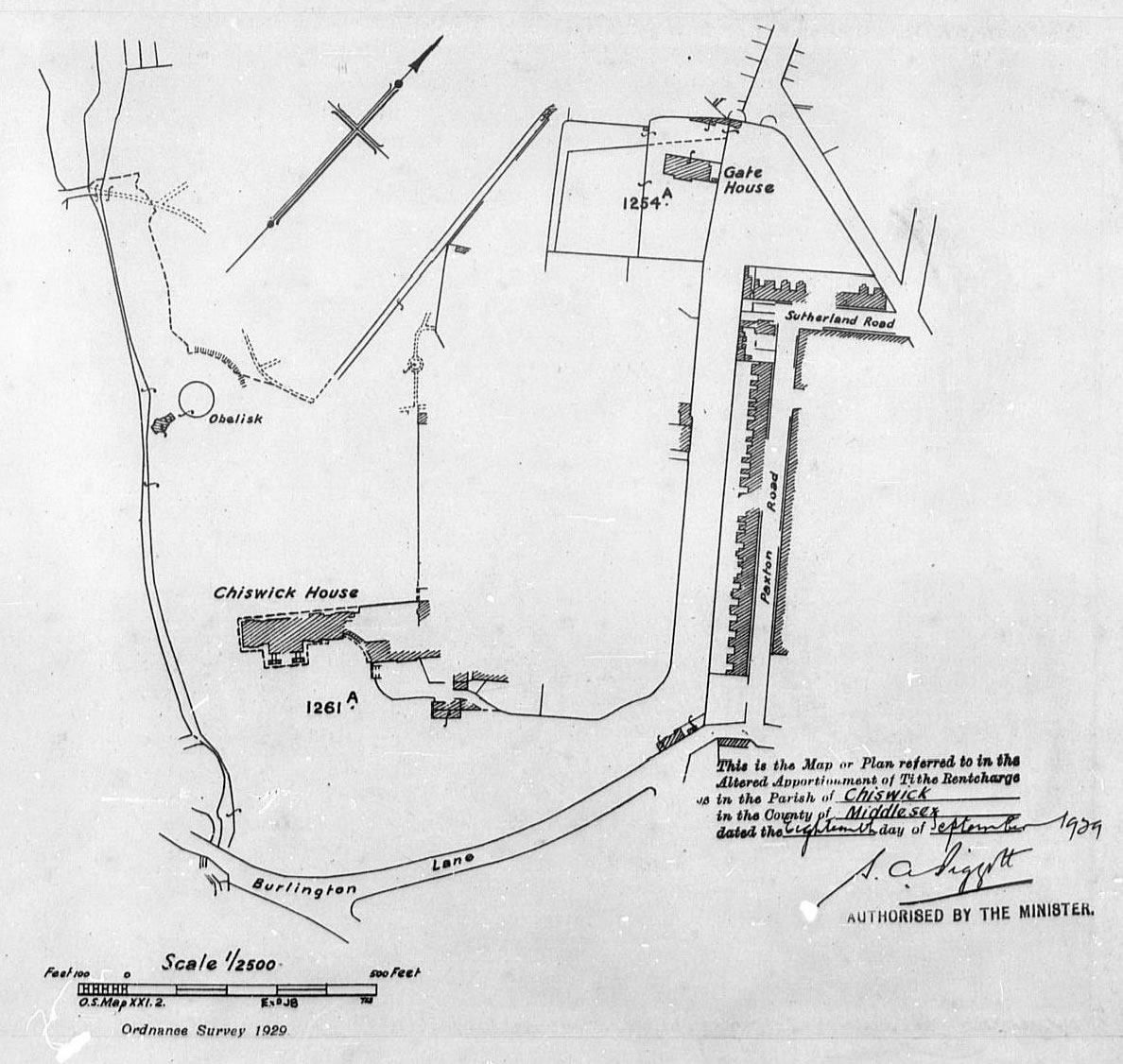 The Doctors, as we would expect, appear in the Occupational Records on TheGenealogist and Thomas can also be located in the Educational Record set for his time at Brasenose College Oxford. 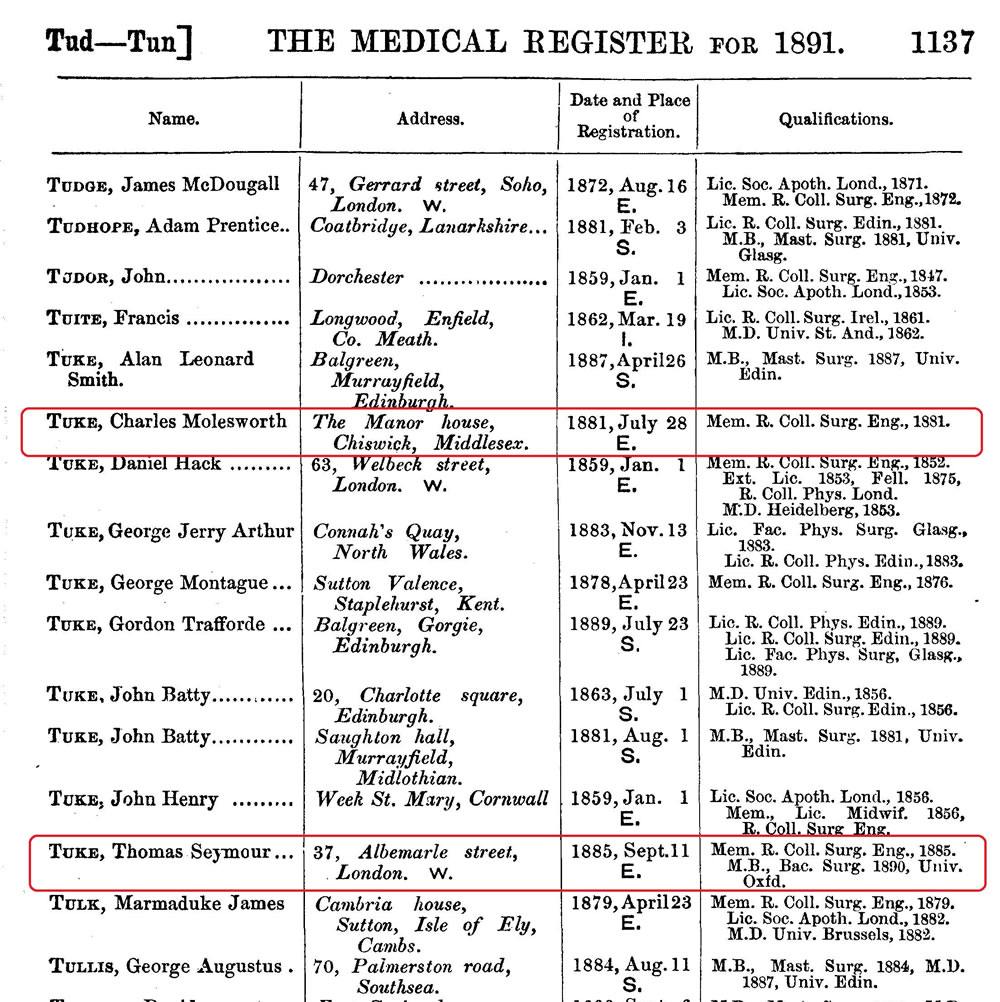 Brasenose College Registers in the Educational Records on TheGenealogist

From a Villa, fit for a Duchess to entertain the Whig elite, to an asylum to look after poor souls who had lost their minds to then be the location of a wartime fire station, Chiswick House has seen many persons pass through its gates. Today it is restored and welcomes the public – though currently the Covid pandemic has closed the house, but not the grounds, to visitors.

Our article has concentrated on the period before the First World War when the Lloyd George Domesday records on TheGenealogist captured it as an asylum run by the Tuke family of Doctors.