Celebrating the centenary of the R.A.F. with TheGenealogist's records

On 1st April 1918 the very first air force in the world to be independent of army or navy control came into being. This was the birth of the RAF when towards the end of the First World War the pilots of the Royal Flying Corps and the Royal Naval Air Service were merged into a new organisation. Adopting the motto 'Per ardua ad astra' that translates as 'Through adversity to the stars', its first Chief of the Air Staff was Major-General Sir Hugh Trenchard. 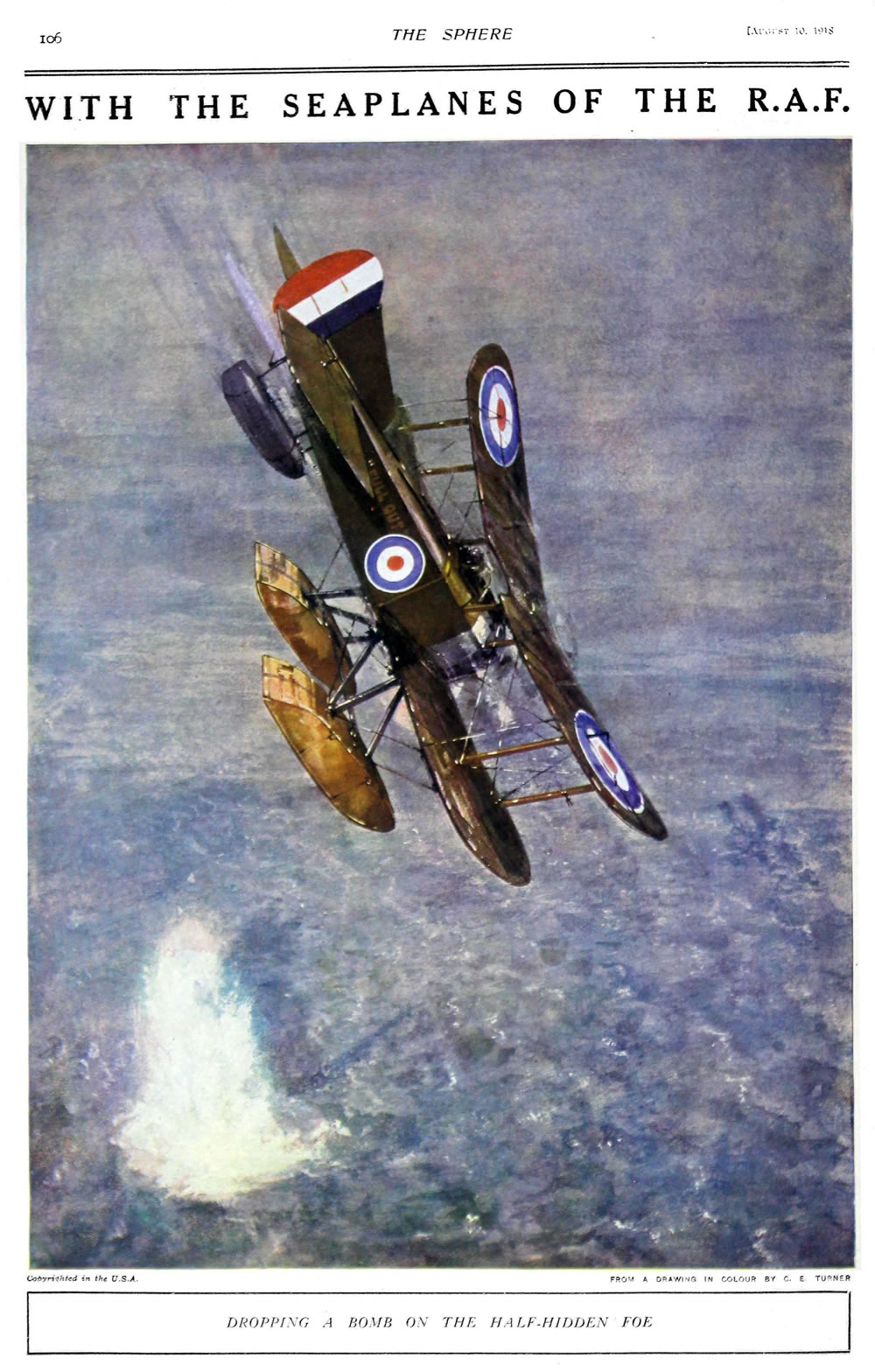 The Sphere August 10 1918 on TheGenealogist

TheGenealogist's occupational records reveals Trenchard in The Flying Book, The Who's Who in Aviation 1918 and also details the makeup of the Air Council who were in charge of the fledgling air force. Its political master was Lord Rothermere, as the Secretary of State and President of the Council, while Sir Hugh Trenchard was the most senior military officer. We can also see that the King issued a proclamation in the London Gazette on 15th March, giving the new service the now familiar name, the Royal Air Force, having been simply called the Air Force in the 1917 Act. 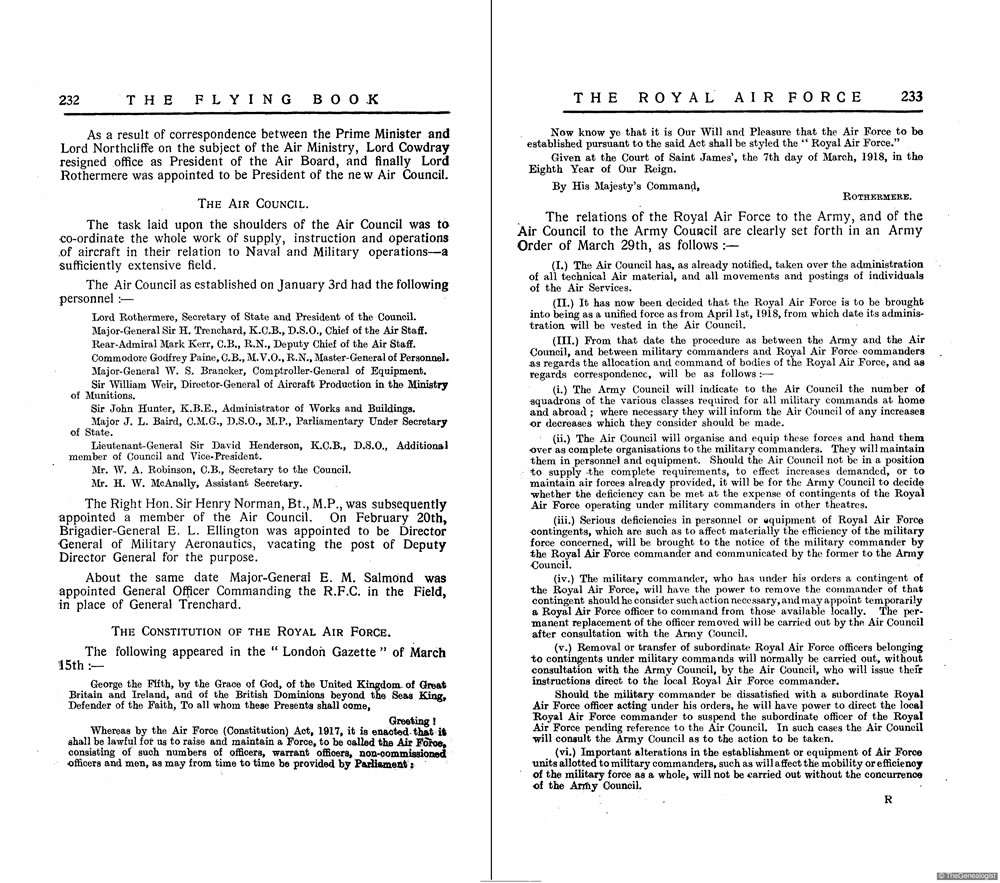 Its military head had not shown promise in his youth. In Trenchard's younger years it was not certain that he would be accepted as an officer in either of the services. To the disappointment of his mother, the daughter of a Royal Naval officer, he failed the exams to enter the Navy. It then took him several attempts to pass the exams required to get a commission in the army after which he then served in the infantry in India. Posted to South Africa during the Boer War, he was shot and seriously wounded, losing a lung and suffering partial paralysis. Convalescing in Switzerland he took up bobsleigh riding to defeat boredom. Miraculously, a jolting crash with his sledge saw his paralysis disappear and he was able to walk unaided once again. Trenchard returned to active service in South Africa and then a further period of service in Nigeria.

The summer of 1912 saw the 39 year old army officer learning to fly using a Farman biplane from the Sopwith School of Flying at Brooklands. While not a particularly talented pilot he was able to gain his Royal Aero Club aviator's certificate (No. 270) on 13th August 1912 as we can discover by searching the Pilot's records on TheGenealogist. 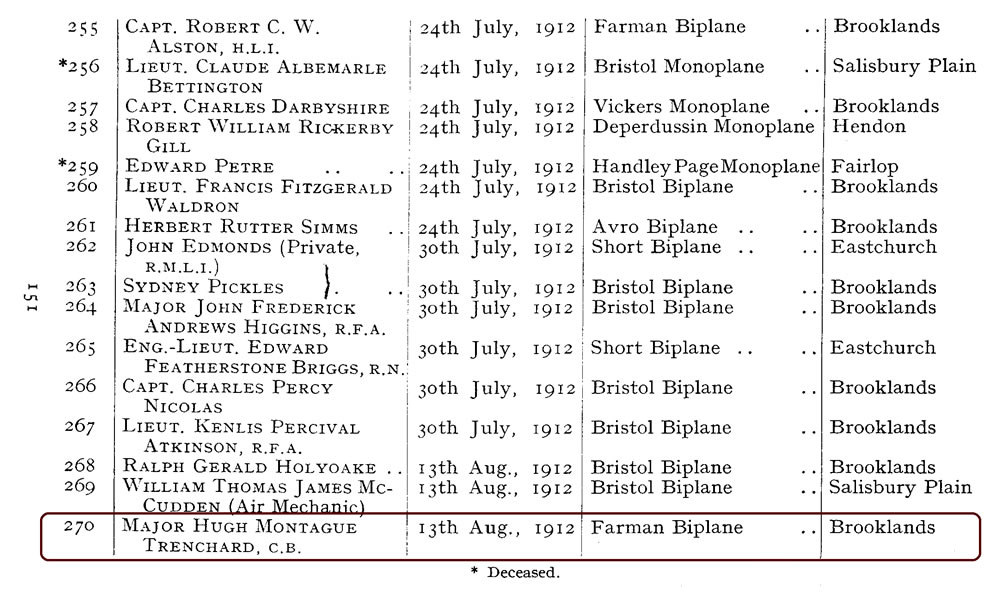 Aviator's certificate number 270 in the Pilot's records on TheGenealogist

Trenchard would hold several senior positions in the Royal Flying Corps during World War I. He, was the commander of the Royal Flying Corps in France from 1915 to 1917. Then, just prior to the official formation of the new air force, Trenchard's position at its head was settled in January 1918. However his appointment was not as smooth as it should have been. Though he had been listed in the 1918 edition of The Flying Book as the Chief of the Air Staff, the Major-General had actually resigned in March 1918 after disagreements with the first air minister, Lord Rothermere. The resignation, however, was held off until late April in order that Trenchard would be the Chief of the Air Staff when the RAF was actually formed. With his departure the job then went to his rival, Major-General Sir Frederick Sykes. Then the next year, with Winston Churchill's post-War appointment as the Secretary of State for War and Air, Major-General Sykes was posted sideways to head up the newly formed Civil Aviation ministry and Trenchard was re-appointed as the Chief of the Air Staff where he would remain at the top of the RAF from then until January 1930.

Trenchard - a Major-General no more

After 1919 the RAF dispensed with the former hierarchy inherited from the army, when it introduced newly created air force ranks for its personnel. At the top Trenchard was no longer a major-general, when he exchanged his former military grade to become one of the first air vice-marshals. Within days, however, he was promoted another rank to be an air marshal and on 1st January 1927 Trenchard became the first officer ever to be raised from air chief-marshal to the highest rank of the RAF: marshal of the Royal Air Force. 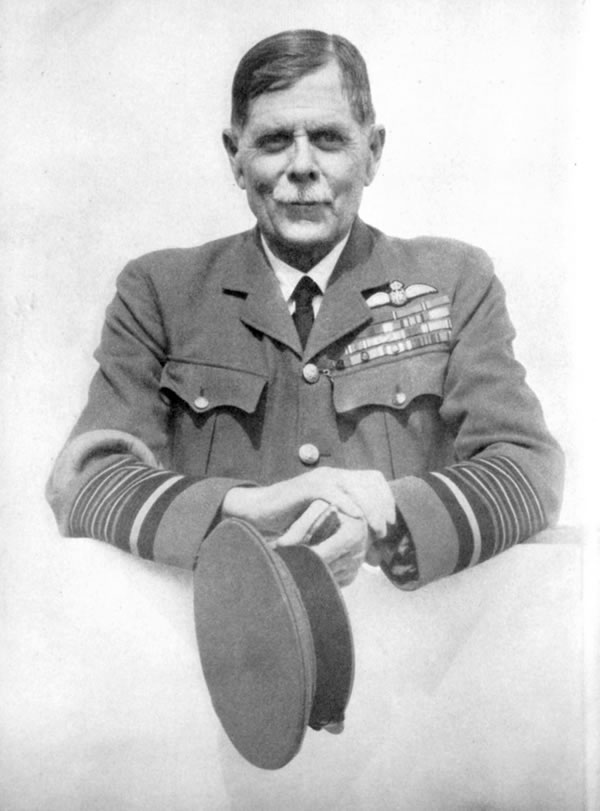 The RAF became the blueprint for air forces across the globe and this April celebrates its centenary as one of the three pillars of the armed forces of this country. The military records on TheGenealogist have already allowed us to trace the inception of this trail blazing service with its extensive collection of military records that include Air Force, Army and Navy Lists. For the years prior to 1918 officers who were aviators will appear in the latter two records and then from 1918 in the Air Force Lists of the RAF. Within this set of records can be found The List of Officers of the Royal Air Force 1918. This will allow family history researchers with an ancestor who had been commissioned into the new service, to find the rank of the man at the time of the RAF's launch. TheGenealogist has added yet more RAF records to its collection in this centenary year to make it easier for researchers to find ancestors that reached for the skies.