Greg Davies - Who Do You Think You Are?

The actor and comedian discovers his Welsh roots run deep 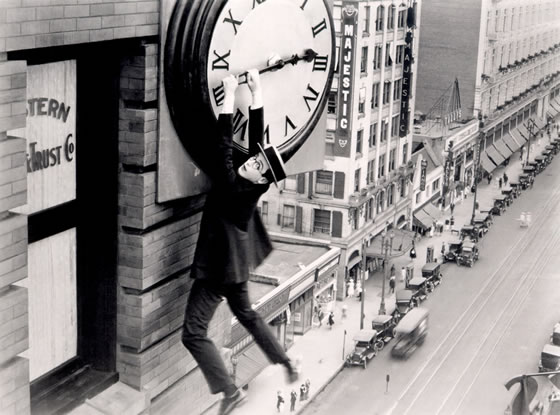 Find your ancestors & break down your brick walls using the same unique tools and record sets we used when researching this family tree.

For one day only, we're giving you the opportunity to claim a one month free trial! Hurry, as this offer ends midnight!

Gregory Daniel "Greg" Davies was born on the 14 May 1968 in St Asaph, Denbighshire. At the time his parents lived in England but Bob Davies, his Welsh father, drove Greg's pregnant mother Pauline across the border to make sure that the child was born in Wales. Greg then spent his childhood growing up in Wem, a small market town in the north of Shropshire. He was schooled at the Thomas Adams School before going on to Brunel University, where he studied English and drama. Before he began his career in comedy, he spent 13 years as a secondary school teacher of drama and English in Berkshire, and Twickenham, London.

Ever since he lost his dad Greg has wanted to explore his family tree on his father's side.

"I think the Welsh roots were incredibly important to my dad... My dad did suggest there was a Davies secret, so if there is a secret – great. I would love it." 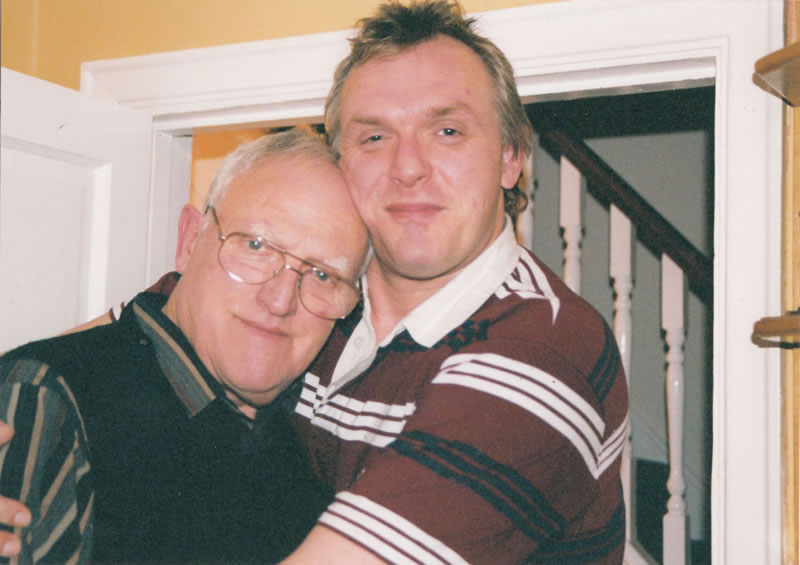 Greg is able to establish that there's a mystery surrounding the identity of his paternal grandmother Edith's father. Research discovers that her father was not the man that Edith's mother, Elizabeth, had actually married. There is no father listed on Edith's birth certificate, which usually points towards illegitimacy of the child recorded. Greg's cousin Viona confirms, in the BBC programme, that there's no father listed on Edith's sister's birth certificate, either. But a look at Edith's marriage certificate finds that she has given her father's name as one David Thomas, a butcher. Greg and Viona have come to the conclusion that Edith probably made Mr Thomas up!

Greg's travels, in search of his roots, takes him to Caernarvon so that he can investigate this more. What he learns is that a man called William Owen had failed to pay maintenance to Elizabeth for their illegitimate daughters. So Greg comes to the conclusion that this William Owen is most likely to be his great grandfather.

"It's really quite peculiar, having known my grandmother as well as I knew her, that years after her death I suddenly know the name of her dad. William Owen was never mentioned by our family... no one apart from Elizabeth, my great grandmother, knew who he was." 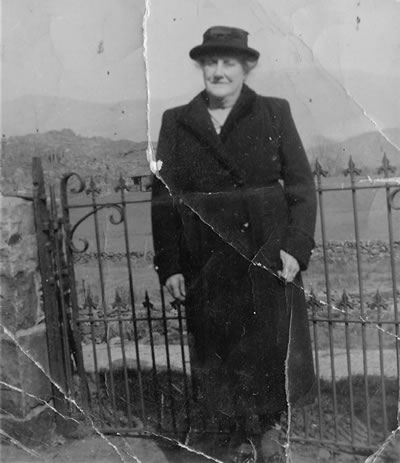 Greg's family story then takes him to Porthmadog in the North of Wales where he discovers that William Owen was, in fact, a butcher. By searching for him, in the census records on TheGenealogist, we are able to see that he was recorded by the enumerator as a Butcher Slaughterman. Moreover, William featured in several local newspaper reports of public drunkenness and wild behaviour around this time in 1901. When told of this Greg decides that his great-grandfather was something of a show-off.

In the census William's place of birth is written as Penmorfa. In order to find his birth, within the GRO indexes, will need us to use the county that this small village falls within. Penmorfa is about a mile from Tremadoc and its historic county would have been Merionethshire. Using this same county we can go on to find the next generation back. A search for the marriage, in 1875, of William's parents returns us their records on TheGenealogist in the district of Festiniog, Merionethshire.

Greg then goes on to find out that William had been raised, not by his parents Evan and Elizabeth Owen, but by his maternal grandparents Robert and Elizabeth Jones. From the 1881 census of the area we can see that they were Butchers. The Who Do You Think You Are? programme follows Greg as he sets off to visit Tremadog, close to where William was born, to try to understand why William was living with the Joneses.

Greg discovers that, tragically, William's mother had died shortly after he was born. From the deaths registered in the first quarter of 1877, on TheGenealogist, we can see that William's mother was only 19 when she died. With a farm to run and probably unable to cope with a baby, Evan left William in the care of his in laws. 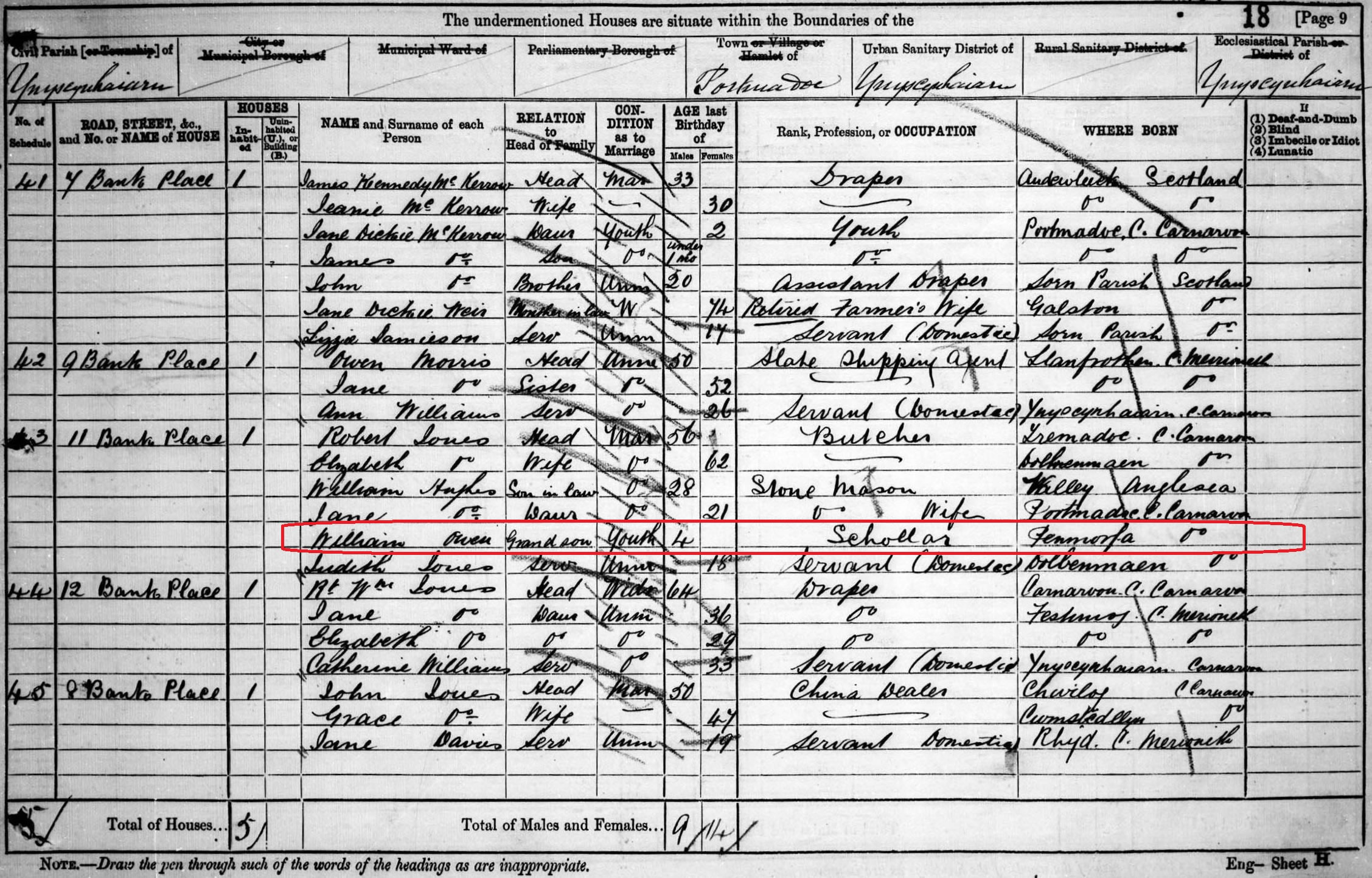 1881 census with 4 year old William in the care of his grandparents.

Greg is, by now, fascinated to learn more about Evan Owen – his great, great grandfather. He finds out that his ancestor was heavily involved in the religious life of the community and the chapel in the area. Naturally, Greg wonders what Evan's relationship would have been like with his son William. Greg thinks about his own very close relationship with his own father.

"It's really exciting to be delving into my dad's past in this way. I can't tell you how much he would have loved to have been part of it, and how sad I am that he isn't."

At the nearby hamlet of Nantmor, Greg visits the chapel where his great, great grandfather had been elected to the post of deacon. In the programme he is seen listening to the choir, and imagines his ancestor's role in the church. Greg finds out that Evan got married again and became a reasonably prosperous farmer. He ponders on the difference between the two - one a Calvinistic Methodist deacon at chapel and undoubtedly teetotal, the other something of a drunkard who was up in court on several occasions.

Greg then sadly discovers that Evan had died in a tragic accident. The Welsh farmer was thrown from a horse-drawn carriage into a flooded river and drowned inspiring some local ghost stories about a man riding across the bridge, cracking his whip.

"Learning about the sad demise of Evan throws up lots of questions about fathers and sons. This whole area of Wales brings back lots of memories of spending time with my dad, and for me to be discovering the story of two men from my family, father and son, who seemingly had no relationship, is quite a contrast... I have to find out more about William, because I do think it will have cast such a shadow on his life."

Returning to Porthmadog Greg is able to visit the house where his grandmother had been born, only to discover yet further scandalous insights into William Owen's life. At around the time that his grandmother was born William had fathered two daughters in the same year but with two different women. One of William's lovers was Greg's great grandmother Elizabeth; the other was his wife - Martha Owen! Three years later and William was taken to court for not paying maintenance to Elizabeth. A character witness for William claimed that he had "behaved well in the south" in reference to South Wales, where William had moved with Martha and their family. Greg follows William's trail to Stanleytown, where they had settled.

"I can't shake the idea that William may have been taking his family away from the chaos he's caused in North Wales. But if my great grandfather thought he could evade his responsibilities, I'm here to tell him, 105 years on, I'm coming for him."

William, we can see from the 1911 census, had found work as a colliery labourer during the mining boom in South Wales. The influx of people seeking employment may have provided some anonymity for William, away from the town where he was known for his misdemeanors. 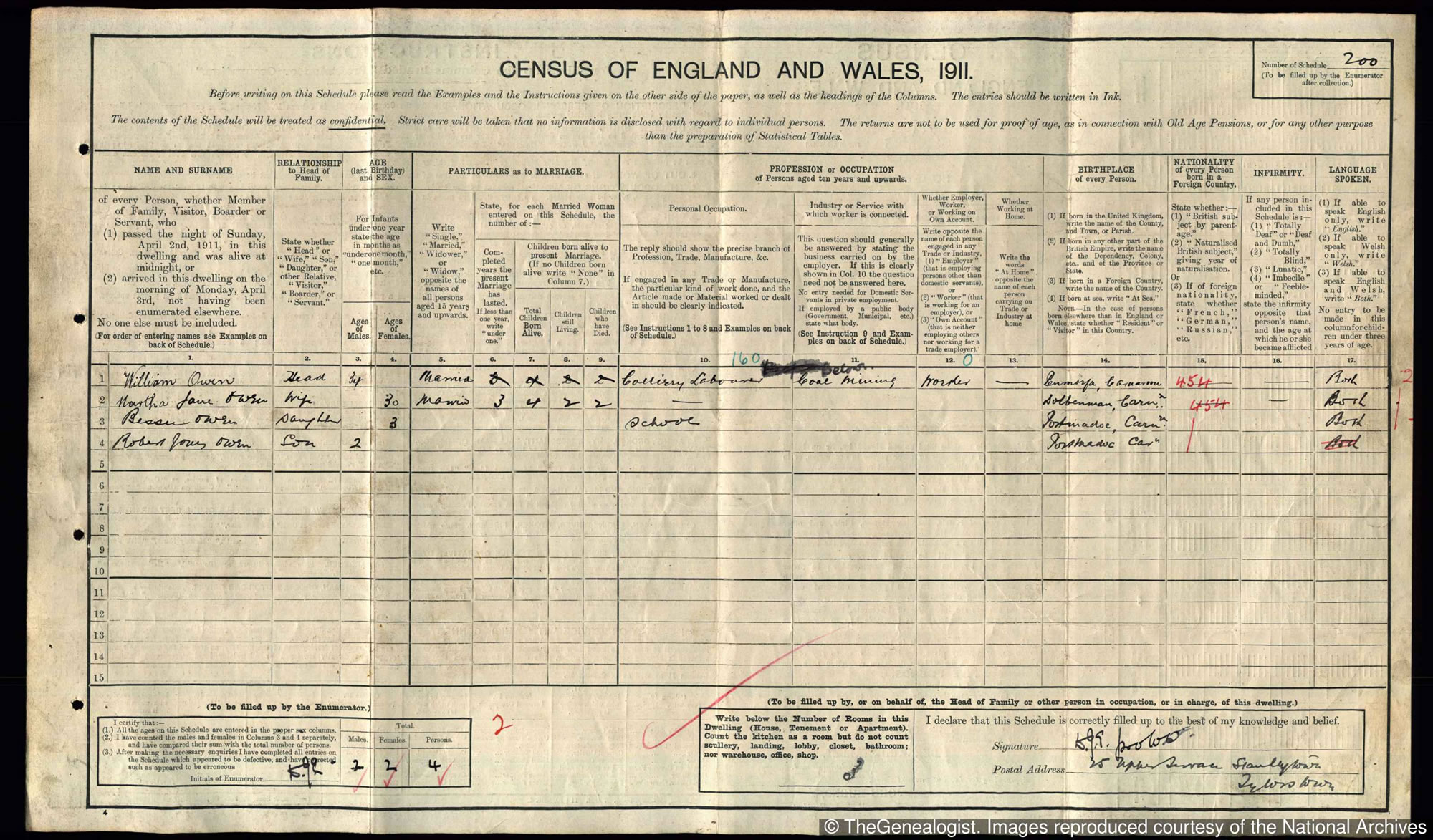 Greg is delighted when, in the television show, he is able to meet William and Martha's only surviving child, Meirionwen.

"I've got a half great aunt I didn't know about!"

Meirionwen tells Greg more about William's personality, and what a difficult man her mother found him to be. Greg then visits William's grave and finds it a struggle to make a connection to this particular ancestor of his. After this Greg returns to North Wales, to try to track down his Owen family roots yet further back. On a visit to the family farm, and to his amazement, he discovers that the Owens can claim a connection to Owain Gwynedd, the first Prince of Wales from the 12th century!

With this revelation Greg revels in his new found royal lineage – that is until, in a packed Welsh pub, he realises that almost everyone else in the pub also claim to be descended from Owain the Great!

"I've never really considered the significance of extended family before... That's one thing I'm left in no doubt of, the people who went before you shape who you become... I think my father would be both delighted and annoyed that I have at last taken an interest in his family, and the roots that were so dear to him. I will come back here, and I will find out more and I'm only sorry I didn't do it sooner."

Find your ancestors & break down your brick walls using the same unique tools and record sets we used when researching this family tree.

For one day only, we're giving you the opportunity to claim a one month free trial! Hurry, as this offer ends midnight!