Jane Seymour - Who Do You Think You Are?

An emotional rollercoaster journey into her past...

Jane Seymour OBE was born in 1951 and originally appeared on the stage as a ballet dancer. After training at the Arts Educational Trust for dance, she went on to dance with Russia's renowned Kirov Ballet. An injury sustained in her first performance, however, put an end to her dancing career before it had even begun.

She then turned her attentions to acting - playing a number of successful TV roles before heading off to the US in search of the bright lights and leading roles.

Her film debut was as a chorus girl in Richard Attenborough's 'Oh, What A Lovely War' and then, after her successful performance in the 'Onedin Line', she landed the role of Solitaire in the James Bond movie 'Live and Let Die', coming to much wider attention as Roger Moore's tarot-telling girlfriend.

Fluent in Dutch, her mother's first language, Jane was educated at The Arts Educational School in Piccadilly, London, England. As for her very English stage name "Jane Seymour", which is also the name of King Henry VIII's third wife, Jane adopted this at the age of 17.

Jane Seymour has been married no less than four times; Michael Attenborough between 1971 and 1973, Geoffrey Planer between 1977 and 1978 and David Flynn between 1981 and 1992 - with whom she had two children, Katherine and Sean. In 1993 she married James Keach, giving birth to twins Johnny and Kris two years later.

For her contribution to television, Jane Seymour received a star on the Hollywood Walk of Fame at 7000 Hollywood Boulevard and she has earned an Emmy award and two Golden Globe Awards. In 2000 she was awarded an OBE.

Jane Seymour came into the world on the 15th February 1951 as Joyce Penelope Wilhelmina Frankenberg in Hillingdon, Middlesex. She is the daughter of John Benjamin Frankenberg, a London obstetrician and Mieke Coert Van Trigt, a nurse originally from Holland. We can find her birth record within the Births & Baptisms on TheGenealogist.

Her father was an English Jew whose family was originally from Poland, and her mother was a Dutch-born Christian, who had been a Japanese prisoner of war during WWII. Mieke Van Trigt went to live in Indonesia aged 20 and got married. Unfortunately her first marriage ended in divorce and then in the war she was interned in a concentration camp for three and a half years.

Jane's father, Benjamin "John" Frankenberg, was born in London on May the 8th 1914 and served in the RAF in World War II. After the hostilities he spent some time trying to find his missing cousins in war torn Poland, but to no avail. 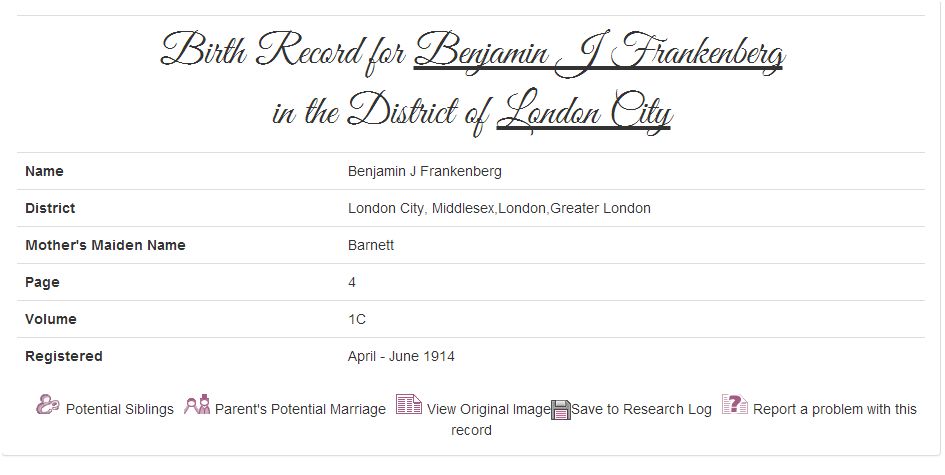 With Jane's jewish ancestors, on her father's side, tragically there were bound to be family members who suffered in the Holocaust. Two of her great-aunts, Michaela and Jadwiga were to experience the horrors of Poland under Nazi occupation. Jane's paternal grandfather, Leon Frankenberg, had come to Britain after his family had fled persecution in Eastern Europe. His sister Jadwiga by now married to obstetrician, Herman Temerson, ended up in the Polish ghettos set up by the Nazis to contain the Jews. The family managed to make their escape through a building to the so-called Aryan side and gain shelter among the Poles. Having to go into hiding she became separated from her family. After the war Jadwiga would sadly discover that her husband and children had not survived, her husband having been shot by a German soldier in 1944 as they retreated.

Jadwiga, we have discovered, had made her way to Switzerland where the sisters were reunited. Her elder sibling, Michaela and husband Aron Singalowski, had made her own terrifying flight there in the war to escape from Vichy France and the Nazis. But a happy ending to this family story was not to be. Having survived a concentration camp, Jadwiga would then commit suicide when the authorities told her that she must go home to war torn Poland at the end of her temporary visa. Having lost her husband and children it must have been the final straw.

Jane's grandparents were lucky in that their respective Polish Jewish family had emigrated to England years before.

Her father's parents were Leon Abraham Jacob Frankenberg and Sarah Zaions. Interestingly we can find them both in the 1911 census, before they were married, living under the same roof on census night. Sarah as a daughter of the head of the household and Leon was listed as a "Boarder". The household of eight are squeezed into a four room dwelling in Bethnal Green. The 22 year old Leon is in business as a Hairdresser and confusingly he was recorded as being born in Russia, Poland with no town given. We do have to wonder how did his Polish landlord not know his lodger's nationality? 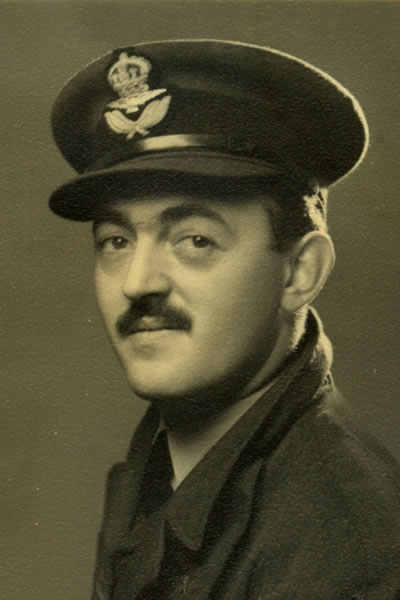 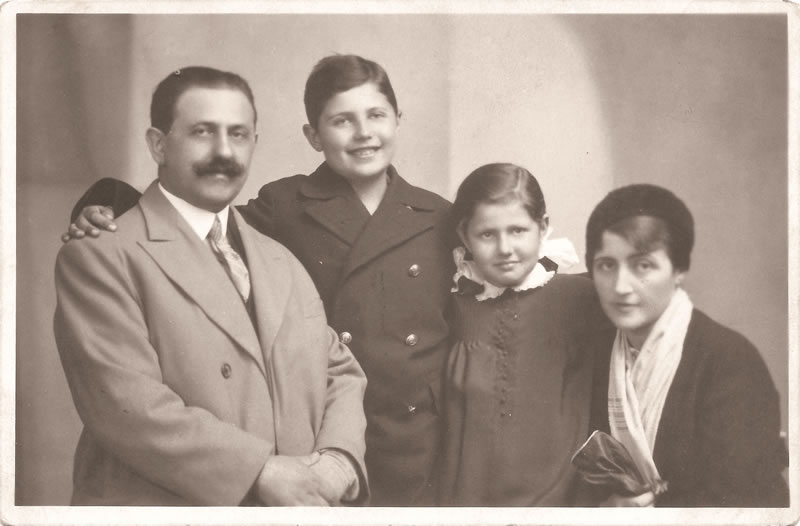 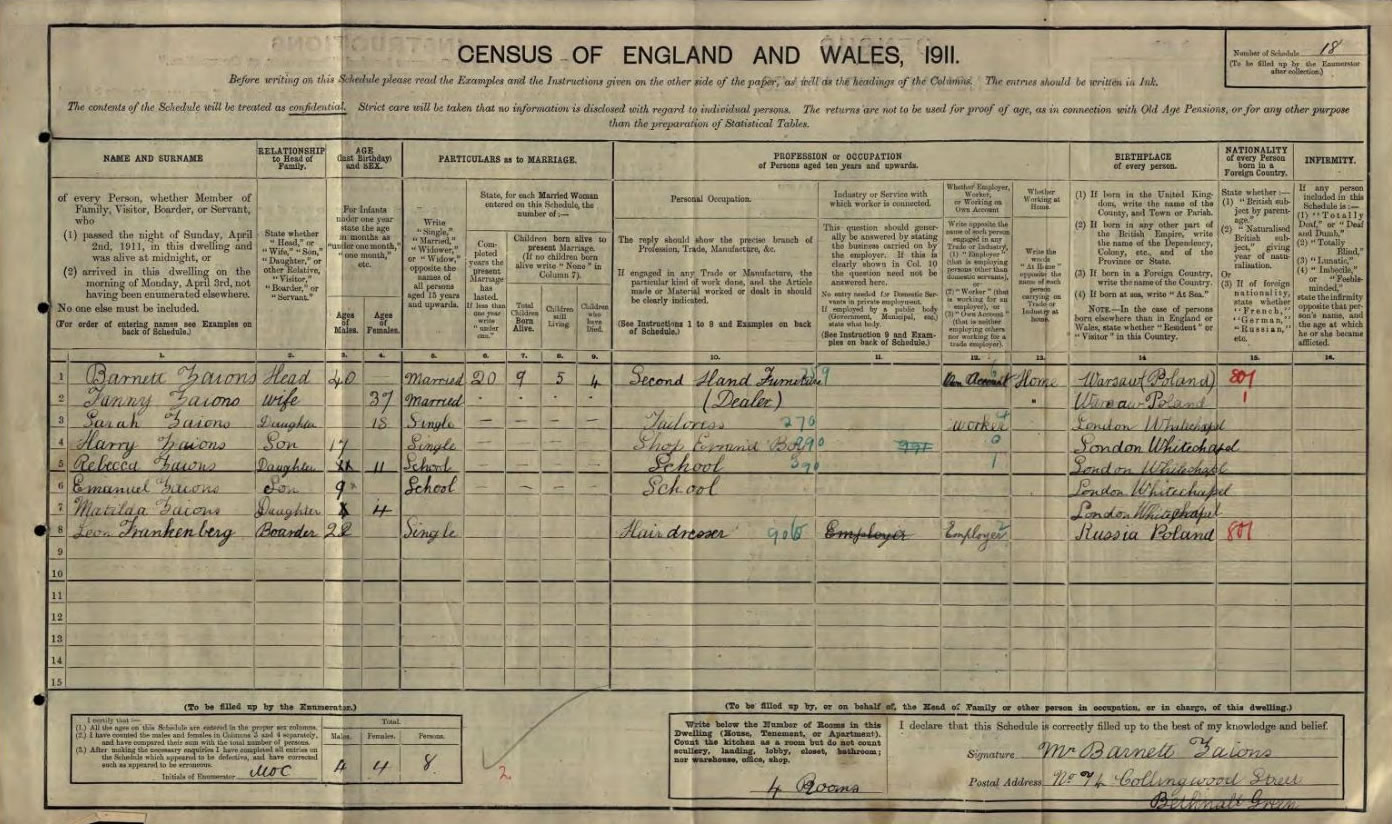 Jane's paternal grandfather had come to live in the East End of London after escaping the pogroms when he was 14. Jane believed that he had no education and didn't speak any English when he arrived. He began in this country by selling razor blades, being a barber's assistant, and then manufacturing razor blades, until he eventually had his own company.

Using the newly added Jewish Synagogue Seatholder records we are able to find several entries in the 1920s and 1930s for an L. Frankenberg of 15 Stoney Lane, London EC as a seatholder and financial representative of the Great Synagogue. This building once stood in Dukes Place, London and was, for centuries, the centre of Ashkenazi synagogue and Jewish life in the capital until it was destroyed during World War II, in the Blitz. 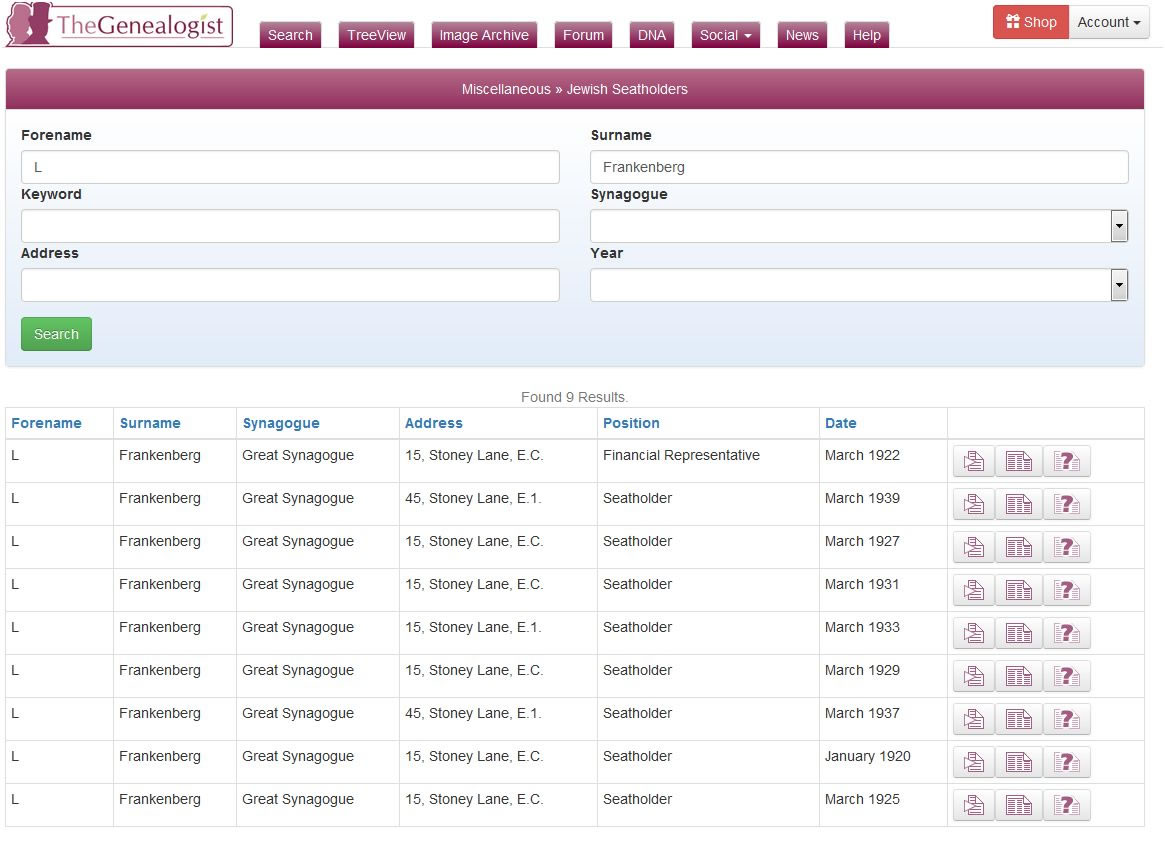 Clicking on the first entry returns us the following page, by which time L Frankenberg had moved to 45 Stoney Lane. 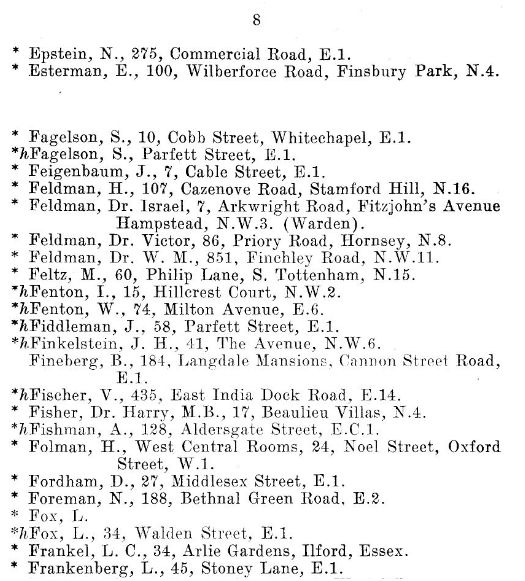 Looking in the Trade Directories, on TheGenealogist, to locate this address we find a Lewin Frankenberg within the 1936 London Kelly's directory listed as a General Merchant at 37 Houndsditch, but crucially he also occupies numbers 45 & 47 Stoney Lane. 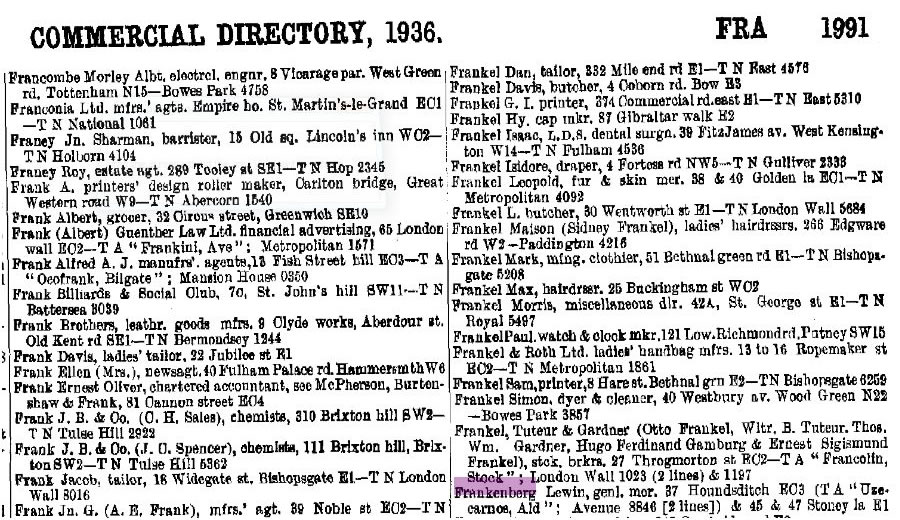 Jane Seymour’s family story is one of terrible hardship inflicted by one set of human beings on another. While it was her jewish great-aunts, that the TV show followed, we have found that their brother, Jane’s grandfather, had emigrated to England many years earlier to become a successful businessman and respected member of his synagogue.