Frank Gardner - Who Do You Think You Are?

From a diplomatic incident in the 1950s to a tudor ancestor who was executed for treason...

Frank Gardner is well known to the British viewing public as the BBC's Security Correspondent. Famously, he made the news himself when he was shot and paralysed in 2004 reporting from Riyadh in Saudi Arabia. He has since returned to work and appears on our screens now in his wheelchair, or supporting himself with a frame.

Francis Rolleston "Frank" Gardner OBE FRGS was born on 31st July 1961 the son of Robert Neil Gardner and Evelyn Grace Rolleston who were both British Diplomats. 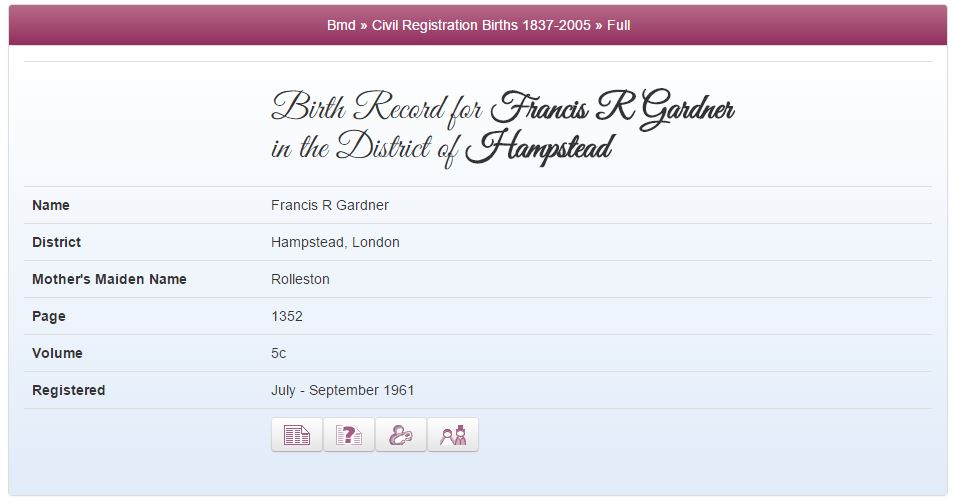 His mother, known as Grace, passed away in 2014 and, according to her obituary, she had been a Cambridge scholar, diplomat and artist.

Searching for her in the births, marriages and death indexes on TheGenealogist we find that she was born in the Wandsworth district of London in 1923 and was the daughter of John Davy Rolleston and Mary Edith Waring, who married in Chelsea in 1917. It is from this side of his family that Frank Gardner gets his middle name of Rolleston.

Frank's maternal family had always maintained that they came to Britain with the Normans. To find out if this family story was true, researchers began to trace his line on a journey back through the centuries. In the process Frank is found to be descended from the Tudor knight, Sir Michael Stanhope, a man who developed close links to the seat of Royal power. Born before 1508 he was the son of Sir Edward Stanhope of Rampton in Nottinghamshire and died on 26th February 1552.

Stanhope's half-sister had married the royal favourite Sir Edward Seymour, who then rose to become the powerful Duke of Somerset and Lord Protector. With this familial connection Frank's 10 x great grandfather was also able to rise in the court. Sir Michael Stanhope had been a member of Parliament in 1547 as one of the knights for Nottinghamshire in Henry VIII's reign. Nothing is known about his role in the Commons, but with the ascension of the young Edward VI to the throne and Stanhope's brother-in-law, the Duke of Somerset, becoming the Lord Protector, Frank's ancestor was then appointed to be the Groom of the Stool. With this he had control of the King's privy purse.

Sir Michael's alliance with his brother-in-law, however, resulted in him falling from grace and suffering several periods of confinement in the Tower of London, when the Duke of Somerset was accused of "ill-government". Finally Sir Michael's fate was sealed in 1552 when he was accused of planning the murder of the Duke of Northumberland, the Marquess of Northampton and the Earl of Pembroke. Convicted of the crimes, he was condemned to death by hanging. His sentence, however, was then commuted to a lesser punishment - Stanhope was beheaded on Tower Hill on the 26th February 1552.

In the 1911 census on TheGenealogist we find Frank's maternal grandfather, John D. Rolleston, working in Tooting Grove at the Hospital for Infectious Disease. He is employed there as an Assistant Medical Officer and appears on the first of the many pages that are required to fully enumerate this south-west London institution. 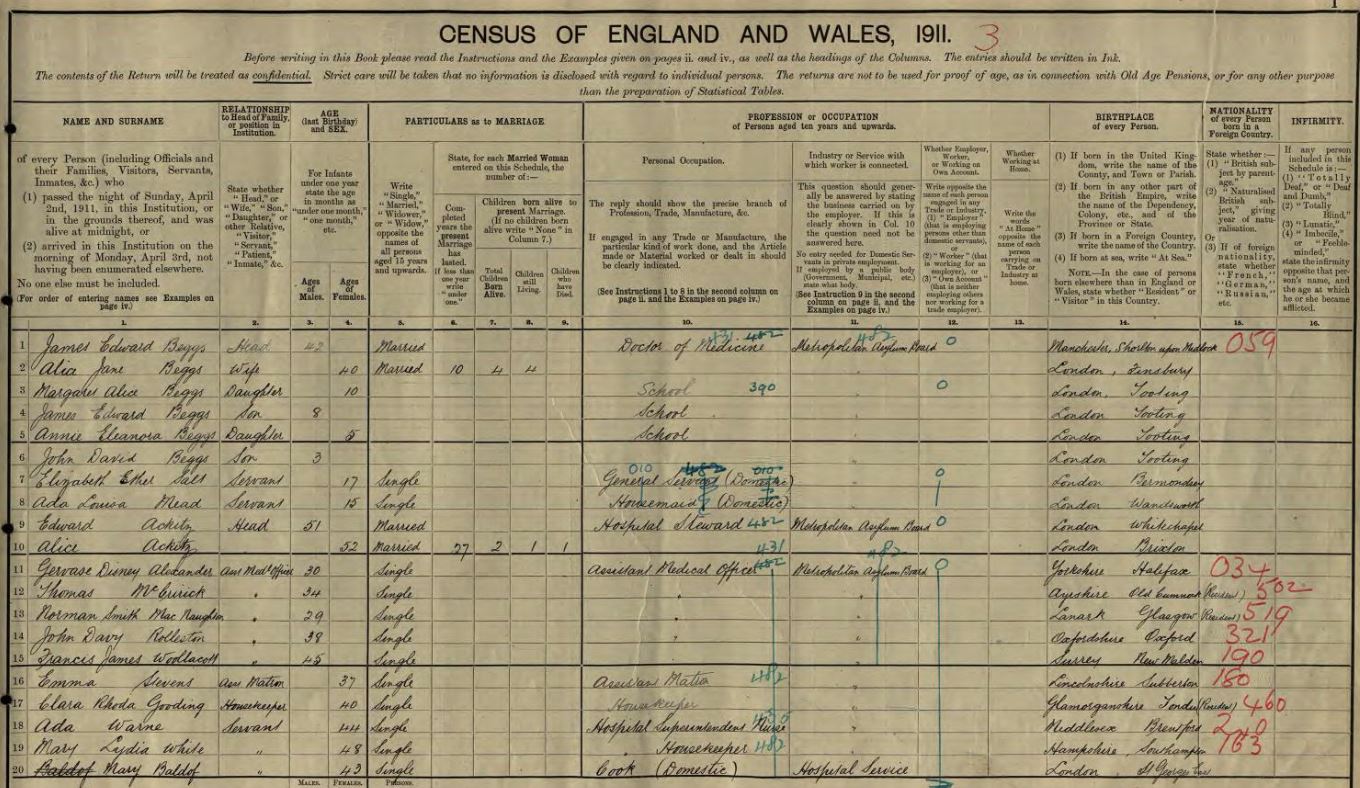 John Rolleston in the 1911 Census at TheGenealogist.co.uk

By researching the educational records on TheGenealogist, this senior medical man is easily found within the Marlborough College Registers which reveals to us his many qualifications and provides insight into his family - he is the son of Professor G. Rolleston, whose field of medicine was Anatomy.

John Rolleston in the educational records at TheGenealogist.co.uk

Turning our attention to Frank's father, Robert Neil Gardner, reveals an extraordinary story of his involvement in Cold War espionage.

At first our researchers had no inkling of his James Bond like escapades. Robert Neil Gardner was found in the obituaries for August 2010 listed as a composer, musician, the dearest husband of Grace, and a much loved father, father-in-law, grandfather and brother. With these details it was then very easy to find reports online that revealed that Frank's father was a composer closely associated with the Armonioso String Quartet and had began composing music at the early age of 6. 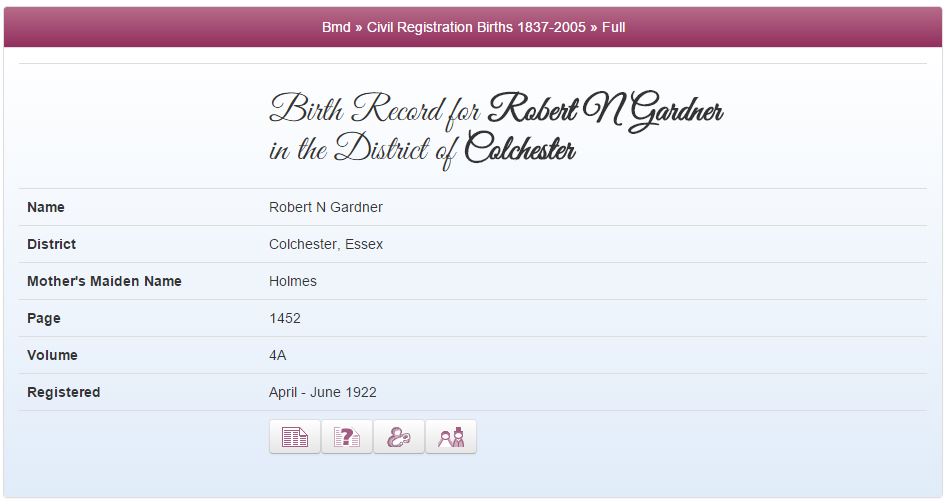 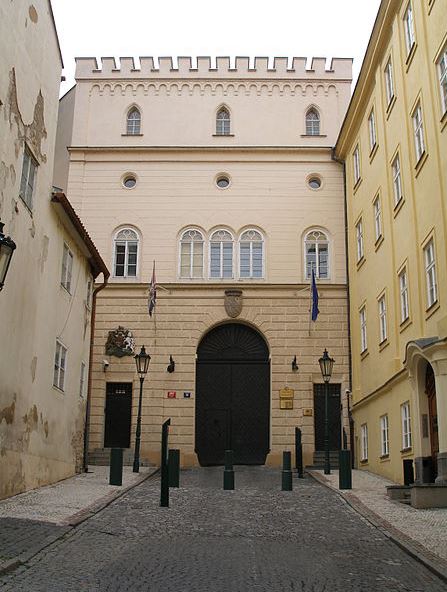 The British Embassy in Prague
(from Wikipedia Commons)

We found that he was born at Colchester, Essex, in 1922 using the BMD records on TheGenealogist. Neil Gardener, as he was known, spent the Second World War in the Army and then had a subsequent career in the Diplomatic Service, which was largely spent abroad in Germany, Czechoslovakia, Singapore and the Netherlands. This career path left him little time to pursue his music. Despite this he still managed to gain the performer's licentiate of the Royal Academy of Music, playing the piano in his spare time. Other musical achievements were being awarded the gold cup for piano composition in the first Cheltenham Musical Festival in 1946.

With the knowledge that he had been in the foreign service, our research team began looking for anything about Robert Neil Gardner and his diplomatic postings. They found many newspaper articles about an incident that had taken place in Prague during 1951. Frank's father had been the second secretary at the British Embassy in Czechoslovakia, however at the time he was expelled from the country after being fired upon by the Czech police during a "purported act of espionage" in a forbidden zone!

The story revealed that he, along with an embassy typist, were said to be trying to escape in a British embassy car from the Czech police having been caught red handed exchanging money for military secrets. The typist, Daphne G. Haines sustained an injury that required hospitalization, while Frank's father was only bruised in the shooting. Robert "Neil" Gardner was required to leave the country immediately and Miss Haines was expelled on her discharge from hospital. Czechoslovakia had handed the British embassy a note demanding that Gardner be recalled and that he quit their country before 6 p.m. Prague time on that Saturday night. The foreign office announced at noon that the diplomat would set out from Prague by car on Saturday afternoon and leave the communist state as requested.

So the obituary in the newspaper for a composer and musician fails to mention anything about his brush with death in the diplomatic service of his country.

From a father who had been involved in a diplomatic incident in the early 1950s to the ancestor who, having mixed with the most powerful men in the Tudor court, was executed for treason on Tower Hill, Frank's ancestors make for an interesting group.