Was your ancestor a 'Saturday Night Soldier'?

A new release of over 51,000 records of the Territorial Force Efficiency Medal from TheGenealogist looks at the Territorial Army soldiers who served with distinction in Britain's army of reservists.

The Army Reserve underwent a major restructuring in 1908 in the reforms introduced by Richard Haldane, the Secretary of State for War. The previously civilian-administered 'Volunteer Force' was combined with the mounted Yeomanry, while the Militia was renamed the 'Special Reserve'

The changes were not universally popular and caused controversy at the time as Volunteer infantry units lost their unique identities, becoming Territorial battalions of Regular Army infantry regiments. Men were not obliged to serve overseas, although they could agree to do so.

This part-time form of soldiering attracted a number of volunteers and the nickname 'Saturday Night Soldiers' was created for the soldiers whose primary role was that of home defence.

However, in August 1914, after the outbreak of the First World War, territorial units were given the option of serving in France and more than seventy territorial battalions volunteered. Most regiments had a territorial unit (including The Royal Engineers as seen below), and some regiments, such as the London Regiment, were exclusively territorial with no regular army units at all. 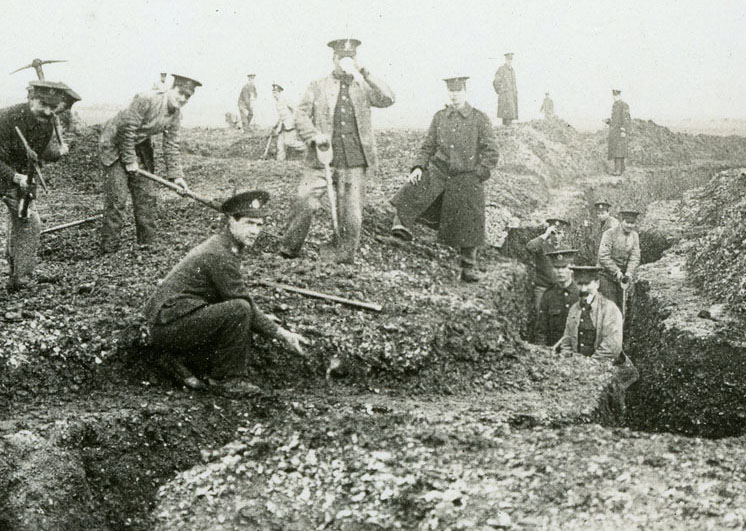 The first Territorial unit to see action on the Western Front was the Glasgow Territorial Signallers Group of the Royal Engineers at the 1st battle of Ypres in October 1914. The first full Territorial Division to take part in the fighting was the 46th (North Midland) Division in March 1915.

When the Territorial Force was introduced in 1908, the service medal 'The Territorial Force Efficiency Medal' was introduced with the new part-time army. It was for long service and good conduct and the 51,000 records now available on TheGenealogist cover those awarded the medal between 1908 and 1930. Between 1920 and 1930 a further restructure in Britain's reserve army meant that the medal was reclassed as the 'Territorial Efficiency Medal'.

The records of Territorial Force Efficiency Medals are easily found on TheGenealogist:

Here we find the record of Private William Thomas Smith of the 6th Battalion South Staffordshire Regiment. He joined the Territorial Force in 1908 and with his service in the First World War, he was awarded the Territorial Efficiency Medal in 1923.

One mouse click takes us to a copy of details of his rank, regiment, service number and the date they were awarded the medal. 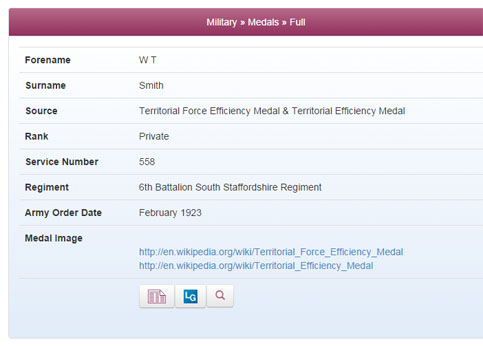 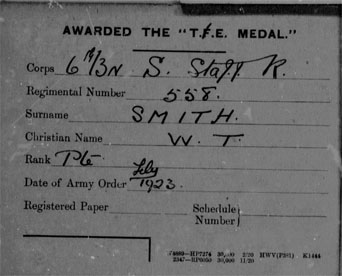 Here we search for another example, Sergeant W Gurney. Sergeant Gurney was a pre-First World War territorial soldier in the Manchester Regiment. He received his medal for good conduct and long service in 1909. 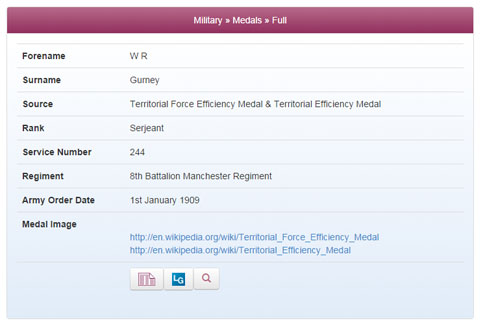 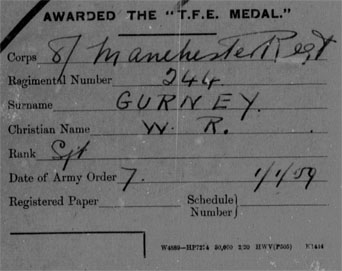 The Territorial Force Efficiency Medal records provide another route for family historians to discover their ancestors' military service records. Many of our ancestors took the extra pay and camaraderie of being a 'Saturday night soldier' and when war broke out in 1914, they were ready to answer the call of King and Country.

The Territorial Force Efficiency medal records are now available to view for all Diamond Subscribers.