Marianne Faithfull - Who Do You Think You Are?

We look at the heroic resistance and horrific experiences of her ancestors in World War II. 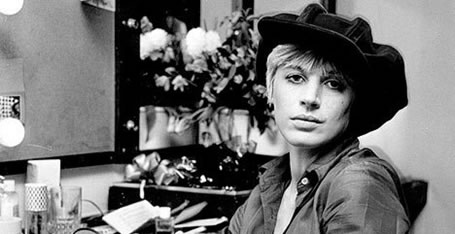 Marianne Faithfull began her singing career in 1964, firstly as a folk music performer in coffeehouses. She soon began taking part in London's expanding social scene of the time. In early 1964 she attended a Rolling Stones launch party where she was introduced to music business contacts that helped launch her career.

Her first major release, "As Tears Go By", was written by Mick Jagger and Keith Richards and became a chart success. She then released a series of successful singles, including "This Little Bird", "Summer Nights" and "Come and Stay With Me".

Faithfull married artist John Dunbar on 6 May 1965 in Cambridge. On 10 November 1965 she gave birth to their son, Nicholas. She subsequently left her husband to live with Mick Jagger.

Marianne's father, Robert, was born in Suffolk in 1912. Robert, whilst stationed in Vienna with the British Army, married Eva Von Sacher-Masoch in 1946 and they had their only child, Marianne in early 1947. Robert's role involved espionage which had brought him into contact with the Von Sacher-Masoch family. The couple lived together at Braziers Park, Oxfordshire before separating in 1952.

Robert was the son of a Veterinary Surgeon and Journalist, Theodore James Faithfull-Davies. Theodore was born in 1885 in Eastbourne. He married Frances Newman Channer in 1910 in Fulham. Here they are in the 1911 census, living in Chelsea.

Theodore James Faithfull-Davies in the 1911 Census

Theodore's parents and family at this time were living in Kent and can be seen in the 1911 Census for Kent. His father, Robert Venn is a member of the clergy with the occupation of 'Clerk in Holy Orders'. Their daughter Margaret is a missionary in the Church of England. 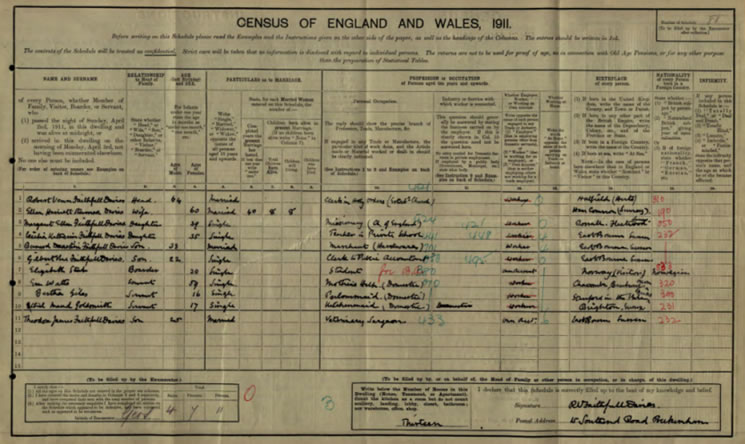 Robert Venn Faithfull Davies and family in the 1911 Census

Theodore's brother, Gilbert Vere Faithfull, a clerk in 1911, joins the army as a Lieutenant in the First World War. He is sadly killed in action aged 29 serving with the Royal Scots in April 1917 as we can see from the war memorial records on TheGenealogist. 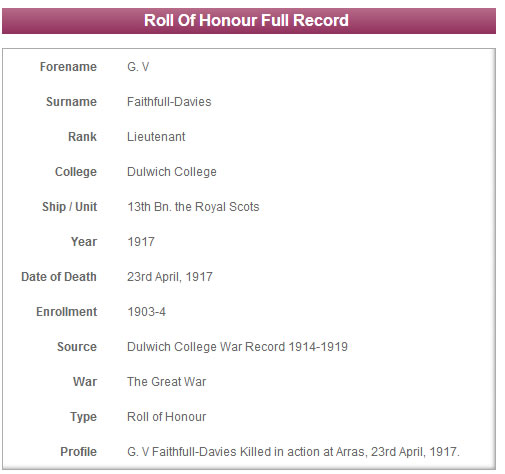 The full transcript of Gilbert's war memorial record (right) from the Dulwich College War Records gives more details on his death on active duty. We discover he was killed at Arras on the 23rd April 1917.

Here we find his record from Winchester College in 1859:

Here is Robert listed in the 1911 Clergy List, and in the Rossall School Directory, a boarding and day school in Lancashire.

Robert in the 1911 Clergy List & the Rossall School Directory

Robert was born in 1847 in Hatfield, Hertfordshire and came from an ecclesiastical family. In the Kent 1851 census, we see him living at a vicarage aged 4 with his vicar father, the Rev. Richard Davies and his mother Cecilia.

On Marianne's maternal side, there is a strong Austro-Hungarian connection. Marianne had a difficult relationship with her mother, Eva, possibly due to Eva's wartime and post-war experiences. Eva was a dancer in 1920s Berlin- the era immortalised in the film Cabaret. Eva was born in Budapest, then part of the Austro-Hungarian Empire. Her parents were Artur von Sacher-Masoch and his wife Flora. Eva was the sister of renowned writer Alexander von Sacher-Masoch. Flora was of Jewish faith, making Eva half-Jewish, at a time of increasing anti-Semitism in Europe. To the right is a picture of Marianne's mother and grandmother, Eva and Flora (wife of Artur Von Sacher-Masoch). 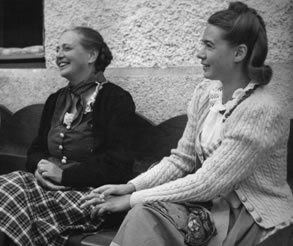 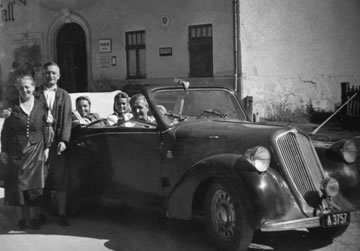 Part of Marianne's tree on TreeView

Marianne is also descended from the celebrated writer and journalist, Leopold Von Sacher-Masoch, a 'fictional' and 'non-fictional' writer, most famous for his work 'Venus in Furs.' The short novel expressed Sacher-Masoch's fantasies and fetishes (especially for dominant women wearing fur). He did his best to live out his fantasies with his mistresses and wives and the term 'masochism' is actually derived from his name!

Eva came from a family of wealth living firstly on their estates in Transylvannia before moving to Vienna in 1918. The Von Sacher-Masoch family was both well-known and respected before World War Two.

Eva then moved to Berlin to work as a ballerina for the Max Reinhardt Company and performed in a number of famous productions.
When World War Two broke out, Eva moved back to live with her parents in Vienna. Despite their Jewish connection, Eva and her mother were not actively persecuted under the Nazis due to the war record of her father and his status as a well-regarded Austrian writer (who worked under the pseudonym of Michael Zorn).

Having opposed Hitler since the Anschluss, and witnessing atrocities against Jews in the streets of Vienna, Sacher-Masoch and her parents used their home to conceal Socialist pamphlets, narrowly evading detection by the Gestapo in an often precarious existence.

Eva and Flora were assaulted by Russian soldiers when they invaded Vienna in 1945 and the opportunity to escape with a British Army officer may have explained why both Eva and Flora eventually moved to Britain.

On TheGenealogist we can see Flora died in 1955 in Reading.

Her daughter, Eva died in 1991 and is buried in St Mary's Churchyard, Aldworth, Berkshire.

The heroic resistance of her ancestors in Nazi occupied Europe and their defiance and then horrific experiences under the invasion of the Russians in 1945 may explain both the enduring strength and the troubled life Marianne Faithfull has led over the years after finding fame at a young age but also the fact she has managed to bounce back on numerous occasions.