John Simpson - Who Do You Think You Are?

From a connection to a famous aviator, to an ancestor with a tragic childhood.

John Simpson was born ‘John Cody Fidler’ in Cleverleys, Lancashire in 1944. His parents were Roy Simpson Fidler and Joyce Lela Vivian Whittall. He has spent all his working life at the BBC. He has reported from more than 120 countries, including thirty war zones, and has interviewed a number of world leaders in his career.

On John's paternal side, his father Roy Simpson Fidler was descended from a line of publishers, publicans and costumiers. Here is a copy of the birth record for Roy Fidler in Lambeth in 1914.

Roys parents were Herbert and Eva. Herbert is a costume manufacturer from Penge, near Croydon.

Roy married Joyce Keen (nee Whittal) in 1941, it was Joyce’s second marriage after she was widowed in 1933. Her maiden name was Whittall but she gives her previous marriage name of Keen on the record.

The Marriage for Roy and Joyce Fidler

This marriage sadly was not destined to last and Joyce left her husband. Seven year old John was given the choice over which parent to live with and chose his father, causing a lifelong rift with his mother.

"...he drank from the bottle by mistake and dropped dead"

Joyce’s mother, Lizzie Caroline Meare King was born in 1875 to parents Edward John King and Elizabeth Davis. Lizzie had a difficult childhood due to the fact her mother left her husband to go to America to try to become an actress. 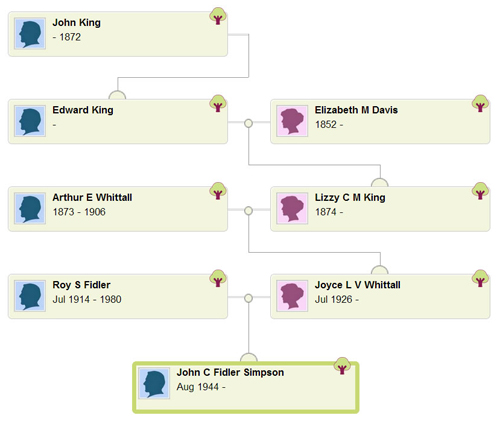 Lizzy's father, Edward John King had experienced tragedy in his younger years, when living with his father, John (who was the landlord) at the Queens Head pub in Chelsea, had asked a waiter to fill one of his father’s old medicine bottles with oxalic acid to clean the metal bar counter at the pub. When John returned he drank from the bottle by mistake and dropped dead in the bar in 1872. Edward may have hoped for a happier life when he married Elizabeth a year later.

Below is a copy of the death record for John King, the great great grandfather of John Simpson, in Chelsea.

Lizzie was brought up by relations including Elizabeth’s father, horse dealer John Blackburne Davis and her Aunt Caroline when Elizabeth subsequently left Edward and her family to go to America to try to become an actress.

Going back to John Simpson's mother, Joyce, at the time of her second marriage (To John's father) Joyce indicated she had another surname ‘Cody’ providing a link to a fascinating story involving one of the great showmen of the early 1900s, Samuel Franklin Cody. 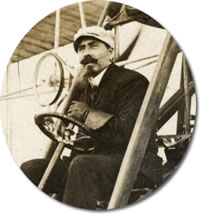 The connection to one of the first great aviators...

However, Elizabeth then reappeared back in England in the 1890s participating in a 'wild west' themed show with American Samuel Franklin Cody (pictured right) and his wife Maud Maria Lee. Elizabeth had aspirations for her sons to be on 'the stage' and being with Cody offered the perfect opportunity. Cody's wife returns to the United States in the early 1890's due to illness spending the rest of her life in hospital but the show continues with Cody and Elizabeth (now known as 'Lela') performing as 'man and wife'. To avoid any embarrassment, Elizabeth's children all assume the name 'Cody' even though he was still legally married to Maud. Elizabeth went on to have a son with Samuel, named after his father.

The family travelled around with their show, so frequently in fact they appear in more than one census record in 1901! Using his cowboy skills and touring with his new family, he developed a dramatic stage show. Shooting cigarettes out of Lela's mouth, shooting apples off the top of the boys head's whilst galloping on horseback and other daring feats gained the show widespread popularity. Here we see clues of the fabrications of their life in the census details- Elizabeth is now called 'Maria Lela Cody', she is now born in Madrid and not London and her age has changed! They also now have a child, Samuel's only son - Samuel Franklin Leslie Cody.

The Codys appearing twice on the 1901 census

Despite their slightly dishonest lifestyle, Samuel Cody went on to become a respected and pioneering part of British society as he subsequently left his stage show to follow his interest in aviation and become employed as an aeronautical engineer with the British Army at Farnborough, which gave him a guaranteed income and eventually led to the 'Cody Kites' which were used by the British Army for observation. An example we can see pictured here. 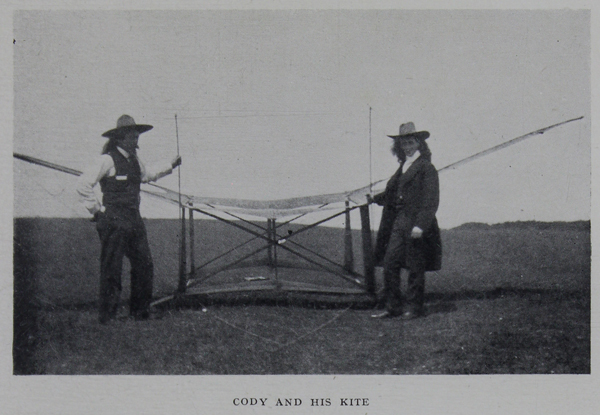 Cody with his Kite

He worked with the army on training, gliders and then on airship development, but his passion grew for powered aircrafts. He received funding from the war office and after just a year of construction he was testing 'British Army Aeroplane No.1' in 1908. Progressing from just a few hops and bumps, by 16th October 1908, he achieved the first powered flight in Britain in an aircraft and made front page news!

In 1911, Cody and his 'family' are firmly established near Farnborough and Samuel fills in the 1911 Census listing Lela and him as a 'married' couple (and she is now younger than him). Cody and family on the 1911 census 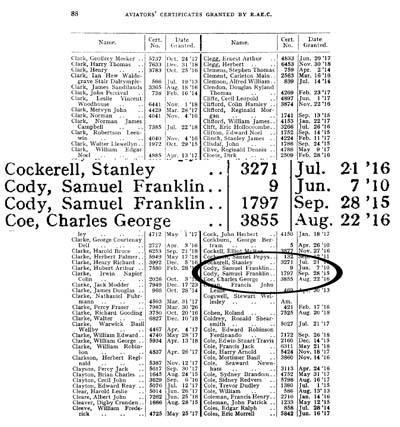 The Codys listed in the aviators certificate

There is a copy of the Aviators Certificates for both Samuel Franklin Cody in 1910 and his son, Samuel Franklin Leslie Cody in 1915, issued by the Royal Aero Club, available on TheGenealogist. Samuel Cody senior was one of the first aviators to receive an ‘Aviators Certificate’ from the Royal Aero Club, he had certificate number 9 issued in 1910. His son, Franklin Leslie Cody received his certificate in 1915. Here is a copy of the record on TheGenealogist.

Cody continually pushed the boundaries and he was renowned for his courage that saw him outperform a number of much younger pilots. Entering many competitions, in 1910 and 1911, he won the Michelin Trophy for the longest duration flight over a 2¾ mile circuit. Other competition success followed.

However, this wasn’t to last - he moved on to testing his new design project ‘The Cody Floatplane’ on 7 August 1913. This tragically broke up at 500 feet killing him and his guest passenger, the cricketer William Evans.

One of the great colourful characters of early flight was lost and he was very publicly mourned by the British people who had taken the American to their hearts. He held the record height achieved for a kite, designed the first ‘man- carrying’ kite and had been involved in the construction of the airship as well as his powered flight exploits. Thousands of people lined the route of the funeral cortege, and he is commemorated at Farnborough Air Sciences Trust, where so much of the pioneering feats took place.

The family of his real legally-recognised wife, Maud, in America then embarked on a successful legal quest to access the estate of Samuel Cody. Lela instructed her lawyers to not dispute the decision, probably recognising she had no legal standing due to never having married Samuel Cody. Things were never straightforward with Samuel Cody even after his death! Instead Lela organised a benefit show at the London Hippodrome to raise funds for her family. One of the songs played was ‘Do be careful’, so ironic for a family of risk-takers pushing the boundaries! Tragedy continued for those bearing the Cody name when their son, Samuel Franklin Cody was killed in 1917 during the First World War attacking four German aircraft. His records are all on TheGenealogist. He had married Maude Carroll before going off to war and she gave birth to another Samuel Cody continuing the ‘Cody’ name. The line continues as we can see on TreeView.

The ‘all-action’, dynamic image of Samuel Cody has in part been copied by John Simpson in his daring reporting from war-zones around the world. Sadly there is no ‘official’ direct relation but it is interesting to see how his mother Joyce would have spent her early childhood knowing the famous Samuel Cody, so much so she regarded herself as a true ‘Cody’.

Lela Cody (or Elizabeth King to call her by her real name) lived a long life and died in 1939, five years before John Simpson was born. Here is a copy of her death record, still living near to Farnborough where Samuel Cody had experienced all those adventures twenty years previously.

To see John Simpson's family in more detail please click here to visit TreeView.
To read more about Samuel Cody and his career in aviation, read our featured article on him here.