Over One Million Apprenticeship Records

With the new collection of apprenticeship records, you can search for both apprentices and masters. 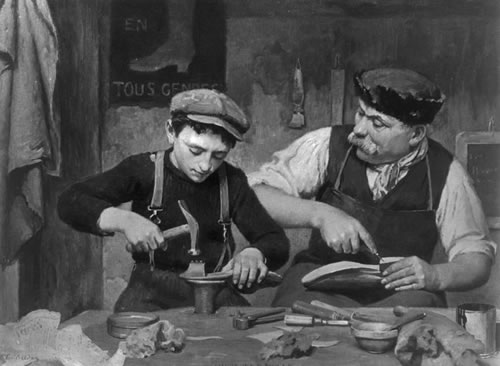 Apprenticeships have a long history, and had become very popular by the 14th Century. To become an apprentice, the parents or guardians of the minor would speak with a Guild's Master craftsman to agree the conditions and price, which would then be recorded in an indenture. The apprentice would usually learn for 5-9 years, depending on the trade and the agreed contract.

Ayme Videau was a silversmith in the mid 18th Century, whose work can still be seen in art galleries today.

With the new collection of apprenticeship records, you can search for both apprentices and masters. For example, we can see that Ayme Videau was an apprentice Goldsmith, and later took on two apprentices himself. Interestingly, when looking at the original images, his surname has been recorded as 'Vedeau' rather than 'Videau'. 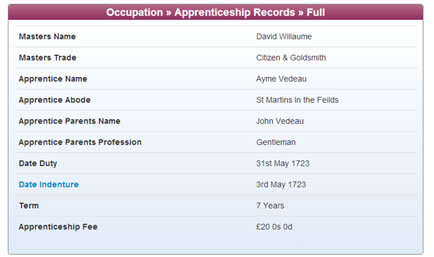 Using the Master Search on TheGenealogist, we can see some more details about Videau's life.

I first searched using just his name, and immediately uncovered his Will and marriage record. As well as a transcribed record of the will, you can also view the original will.

His marriage was found in the Non-conformist records, and shows that he married Elizabeth Dexmier on 3rd May 1733. 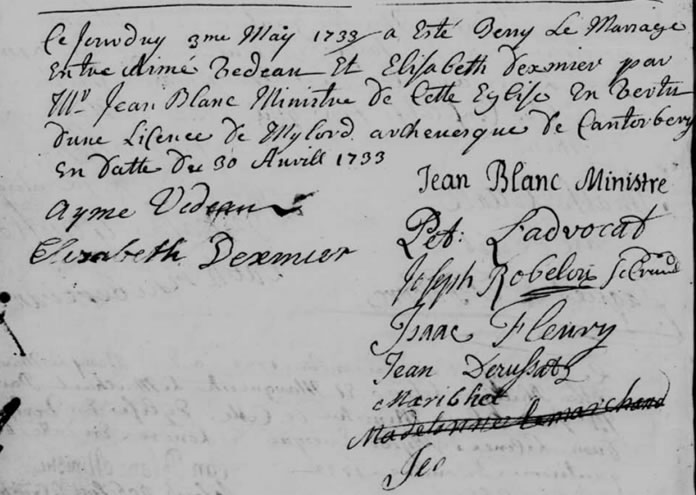 As you can see from the original marriage record, one of the witnesses was John Derussat, who was also a silversmith. He took on his own apprentice in 1762, as shown below: 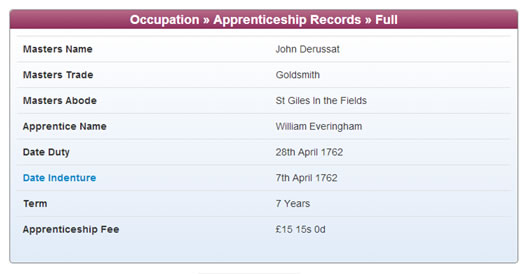 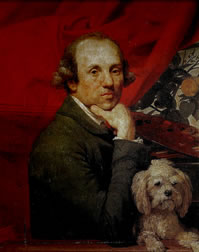 Another person of note in the Apprenticeship records is Johann Zoffany, who was a German painter.

He travelled from Frankfurt to Rome, before visiting Britain, where he enjoyed the company of the Royal Family. He was granted permanent residency in Britain in 1772, as shown in TheGenealogist's naturalisation and denization records.

At the same time, he took on an apprentice called George Hudderford, which can be seen in the new Apprenticeship Records. His trade is shown as 'Limner', which is a painter of ornamental decorations. 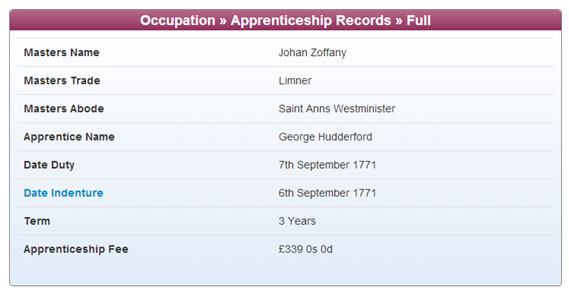 Johann Zoffany takes on an apprentice in the records at TheGenealogist.co.uk

Though Zoffany made several visits to Europe and India in his lifetime, he remained in Britain and passed away at his home in Chiswick on 11th November 1810. His Will can be found on TheGenealogist.

Johann Zoffany in The Dictionary of National
Biography at TheGenealogist.co.uk 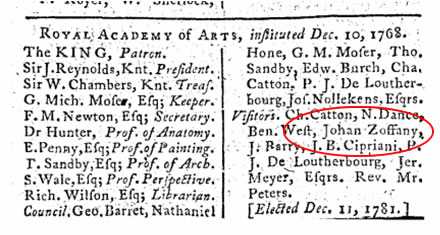 Johann Zoffany in The Royal Calendar 1783
at TheGenealogist.co.uk

Searching for Johan Zoffany using TheGenealogist's Master Search turns up two more interesting result: one containing his detailed biography in The Dictionary of National Biography (left), and another showing his role in The Royal Academy of Arts in the Royal Calendar 1783 (right).

Apprenticeship Records are an invaluable tool for family historians, offering new avenues for research and helping you break down brick walls.