We take a look at the passionate life of the actress Lillie Langtry...

With the completion of the London 1911 census on TheGenealogist.co.uk and more counties to follow shortly, a whole new wealth of information is now available to Diamond subscribers.

Much had changed since the previous census of 1901, Queen Victoria had passed away and her son Edward VII reigned until his death in 1910. The 1911 census was taken on April 2nd, two months before the coronation of the new King George V.

The actress Lillie Langtry, and former mistress of the future King Edward VII, is also present on the census at her residence in London Hanover Square.

Lillie Langtry in the London 1911 Census

Lillie Langtry was originally born Emilie Charlotte Le Breton on 13th October 1853 in St Saviour's Jersey, the daughter of Reverend William Corbet Le Breton, Dean of Jersey and his wife Emilie. Our Diamond subscription provides extensive British and International records, including Directories, Almanachs, Pedigree and Roll of Honour records for the Channel Isles. Almanachs are annual publications containing data and statistics for the area. Many of these also include residential and business listings, similar to those found in directories. The 1893 and 1933 Jersey Almanachs contain a list of all the Dean's of Jersey since 1663 and include Lillie's father William, Dean from 1850 to 1888.

Emilie was given the nickname Lillie during her early teens. It was used frequently by the press during her rise to celebrity status, often referring to her as the 'Jersey Lily', and was later adopted as her official stage name. The Le Breton family had 6 sons so Lillie grew up as one of the boys, joining in their games and learning how to express her own opinions. She was also taught by her brothers' tutor, which gave her with a more extensive education than most women of this time. Through her teenage years her beauty began to emerge, combined with her conversation skills and sharp wit, the Dean found himself frequently turning down prospective suitors for his young daughter.

In 1874 Lillie married Edward Langtry, a relative of her brother's wife. Edward was from a wealthy Irish landowning family and was well known for his large yacht 'The Red Gaunlet', which some suggested was the main reason behind Lillie's acceptance of his marriage proposal. Lillie was eager to move away from the quiet Channel Isles and the couple moved to Edward's estate in Southampton. They later moved from Southampton to Belgravia in London. 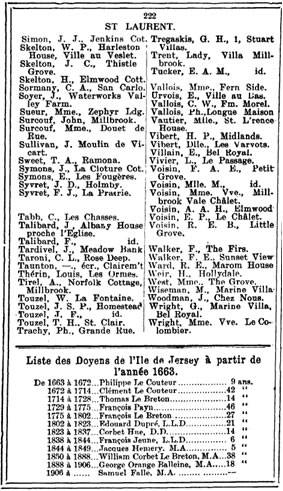 The Langtry's were invited to a high society reception hosted by Lord Ranelagh, and Lillie was immediately approached by several artists present at the reception. The sketches taken of Lillie from the reception became extremely popular on postcards, outselling all other society and stage women. She was flooded by offers from artists wanting her to sit for them, becoming one of the earliest 'pin up' girls. Lillie also caught the eye of the Prince of Wales, Albert Edward, son of Queen Victoria. She became his semi-official mistress, and he had a private house built for them in 1877 in Bournemouth, which Lillie designed herself and named 'The Red House'.

She began another affair in 1879 with Prince Louis of Battenberg and also with an old friend Arthur Jones, but in June 1880 found out that she was pregnant. Her relationship with the Prince of Wales was essentially over by this time, meaning the father's identity was torn between the Prince of Battenberg or Arthur Jones. She gave birth to a daughter, Jeanne Marie, in Paris on 8th March 1881 who later married the politician Sir Ian Malcolm in 1902.

Ian Malcolm is recorded in the 1927 Ireland MP Directory, part of the Irish record collection available in the Diamond subscription, which includes Wills, Almanachs, Directories, Heraldry, Peerage, Military and Landowner Records. The entry for Ian Malcolm contains a description of his political career, his year of birth, father's name, and his marriage to Jeanne in 1902, recording her father as the late Edward Langtry. It also provides a list of all his residences. The Malcolm family can also be found in the Kelly's Handbook to the Titled Landed and Official Classes 1942.

The Kelly's handbook not only provides a short biography for Ian Malcolm but also gives the year he married Jeanne Marie, her parents as Emilie and Edward Langtry, the year Lillie married her second husband and also the year she died, and her father W C Le Breton Dean of Jersey.

When Lillie's affair with the Prince of Wales officially ended in 1880 following a row at a party, the creditors began to move in on the Langtry's, who were unable to support their lavish lifestyle. Lillie was forced to sell many of her possessions to cover mounting debts and decided she needed to find some way of supporting herself. Her friends Oscar Wilde and the famous French actress Sarah Bernhardt introduced her to acting. She gave up her daughter Jeanne to be raised by her grandparents, and embarked on a stage career with her debut in December 1881 at the Haymarket Theatre. The following year she did her first tour of the US. She was extremely successful and continued the tour over subsequent years. Lillie became an American citizen in 1897 and divorced Edward in the same year in California. Occupational records are useful resources for researching ancestors with specific trades such as acting. TheGenealogist has many occupational records available, including 'Who's Who in the Theatre 1922', which contains biographies of actors, actresses and critics here and on the continent, and includes an entry for Lillie Langtry. There are also family trees of theatrical families, theatrical and musical obituaries, and a Roll of Honour for actors, musicians, writers and workers for the stage 1914-1918. 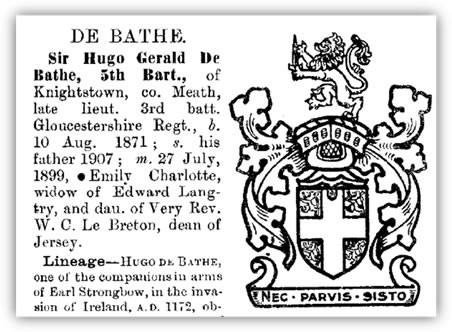 In 1899, Lillie married the much younger Hugo Gerald de Bathe, who inherited a Baronetcy on his father's death, making Lillie 'Lady de Bathe'. He was a leading race-horse owner and the couple retired to Monaco where Lillie died in 1929. The De Bathe family feature frequently in Pedigree and Heraldry records. Burke's Peerage 1921 lists Sir Hugo Gerald De Bathe's lineage, his date of birth and date of marriage to Lillie. It also records Lillie as the widow of Edward Langtry and daughter of W C Le Breton.

Pedigree records are not only limited to researching upper class ancestors, as inter-class marriages occurred frequently, particularly with the younger children, and can provide useful information for many family history researchers.

The Diamond Premium subscription provides access to millions of records including the London 1911 Census. Click here for details of available subscriptions.